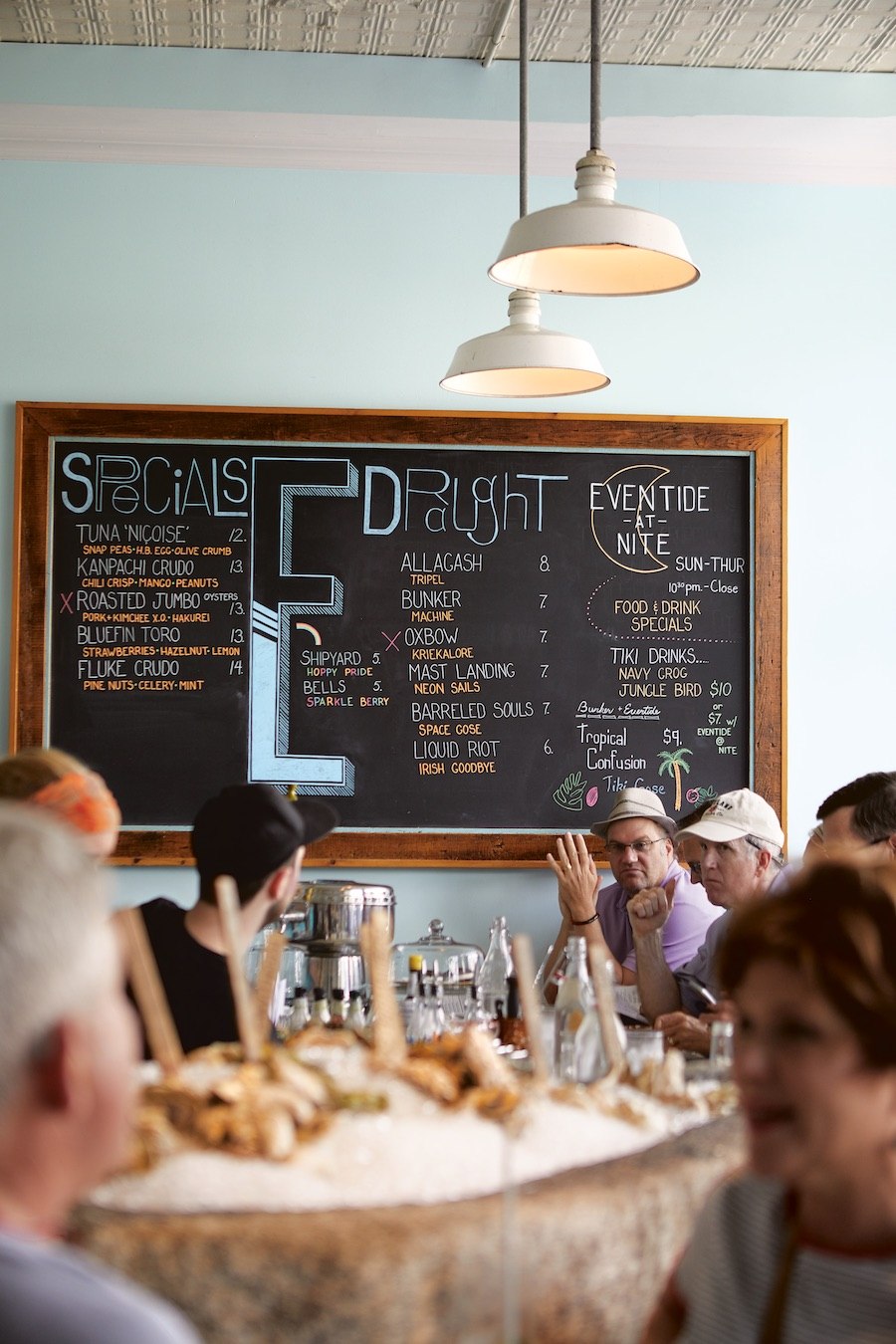 Where to find oysters, Tex-Mex, craft cocktails, and more in one of New England's best food cities.

If you love food and live in New England, you’ve got to make your way to Portland, Maine, which has been a nationally-noted culinary destination for years thanks to the countless food-scene innovators that have called the city home. And it’s not all simple lobster rolls and raw oysters on the half-shell—though there are, of course, plenty of places doing those flawlessly. Up in the Pine Tree State’s largest city, the offerings really run the gamut: pan-Asian noodles, Middle Eastern street food, Southern barbecue, Japanese-style izakayas, and more are all awaiting if you seek them out. To help, we’ve pulled together our top picks in Portland, with something to please both newbie tourists and return visitors hankering for something unexpected.

It’s been almost a decade since co-owners Andrew Taylor, Arlin Smith, and Mike Wiley made a splash on the restaurant scene of Portland (and, arguably, the entire region) with Eventide Oyster Co., and four years since the team opened a much smaller Boston branch in the Fenway. But to this day, no food fan’s trip to southern Maine would be complete without a visit to the original. First and foremost, Eventide pays homage to traditional American oyster bars with 18 varieties of ‘em available on the half-shell—but the rest of the menu is really destination-worthy, too, offering elevated New England seafood dotted with pan-Asian influences. (Think: a ginger-scallion tuna crudo with tare, a sweetened and thickened soy sauce, and sides of house-made kimchi that balance the richness of Eventide’s famed brown butter lobster roll.) Its indoor dining room and outdoor heated patio are open for business, but wherever you plan to pull up a seat, reservations are highly recommended. 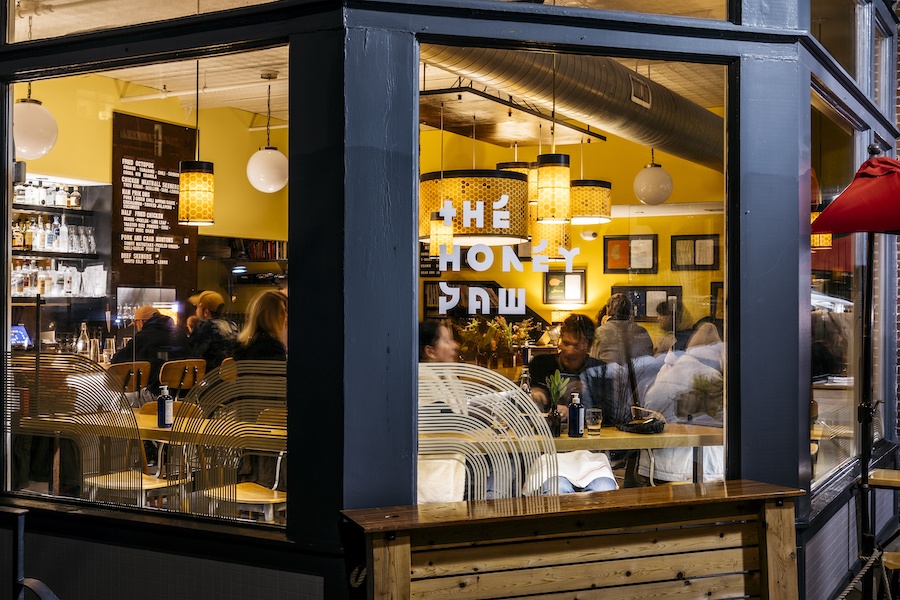 Honey Paw could be couched as just a crunchier, vinyl-spinning younger sibling to Eventide—it’s owned by the same team and is basically right next door—but the restaurant has made a name for itself distinct from its pedigree. How? With flavor-packed noodle and grain dishes inspired by cuisines from across Asia, from the Sichuan mapo tofu to Japanese pork shoyu ramen to a coconut-flecked, Thai-style lamb khao soi. (On the dessert side, meanwhile, don’t let the cold weather stop you from ordering the caramelized honeycomb soft-serve.) Take note, the space might be best for small parties: It’s built around a large communal table and bar seating, which can make it a little challenging for big groups to sit together.

This small sandwich spot in the Old Port sets itself apart by centering the most beloved deep-fried potato product: the French fry. Hand-cut, fried in duck fat, and served up in a cone of delightfully grease-soaked parchment, they’re delicious enough to build a reputation on alone—although it certainly doesn’t hurt to serve ‘em with sauces like truffle ketchup and “atomic horseradish” mayo, or to proffer them in the form of poutine, replete with duck gravy and locally-sourced cheese curds. The rest of the menu is great, too—the paninis cover everything from Oaxacan-style smoked brisket to a banh mi with duck confit, plus you’ll find milkshakes in flavors like vanilla bean and blueberry-and-buttermilk. They have wonderful salads too, but come on, live a little. 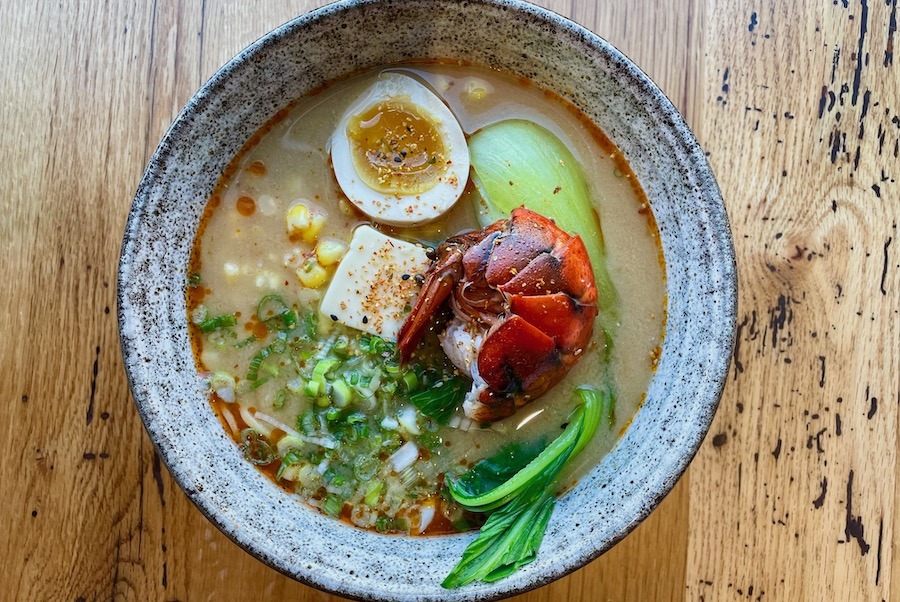 Pai Men Miyake, the second Portland restaurant from Japan-born chef Masa Miyake, is temporarily his only one: His first, the more upscale Miyake, is under renovation until 2022. Pai Men is no second-fiddle spot, though. Dishing out nearly a dozen top-notch varieties of ramen—the paitan, made with chicken and pork broth, is its signature—plus bao buns, donburi, and sushi, Pai Men offers unfussy and yet expertly-executed fare that’s sure to comfort after a long day of seeing the sights.

Chef Chris Gould’s wildly popular Central Provisions has a very simple organizing principle for its menu of small plates: snacks, hot, cold, and raw. From there, though, the menu unfurls to accommodate wide-ranging selections—Spanish chopped salad with candied chorizo, bluefin tuna crudo, amaranth-crusted scallops, to name a few—making it an ideal place to bring a group of adventurous eaters up for a little bit of everything. (There’s also a surprisingly extensive caviar selection, dignified with the menu header “Make It Boujiee.”) Waits are common, but you can always head downstairs to the buzzy bar to pass the time. 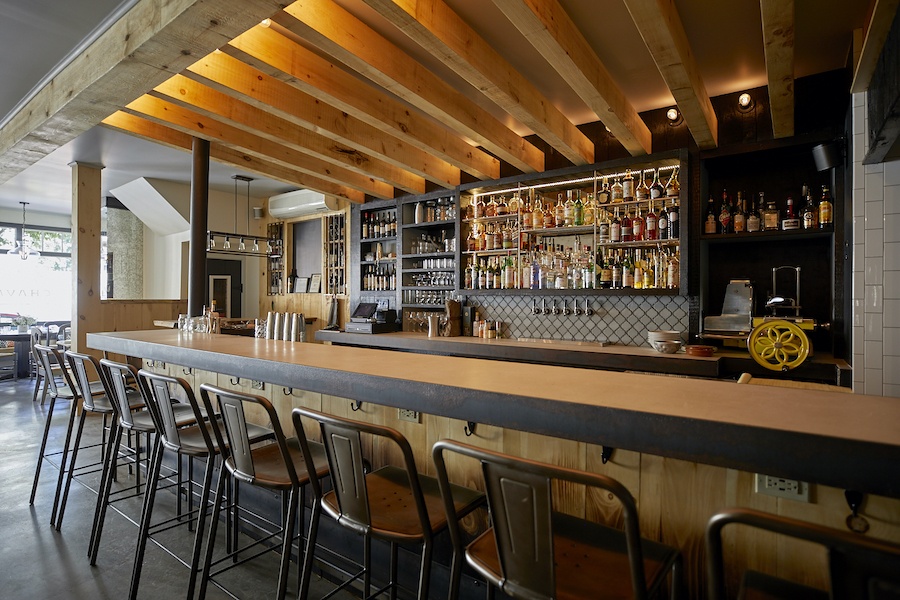 This beloved brasserie off the beaten path in the West End is the second from the married team of Damian Sansonetti and two-time James Beard Award nominee Ilma Lopez. To keep diners coming during the pandemic, the two keep heat lamps and a fire pit on their large outdoor patio—meaning it’s now an all-season spot for enjoying their seasonal, Spanish and French-inspired menu. Menu-wise, the selection varies daily, but everything from classic patatas bravas to coq au vin or swordfish a la plancha is on the table. For the fullest experience, though, be sure to kick off the meal with an aperitif from their more-than-solid vermouth selection. 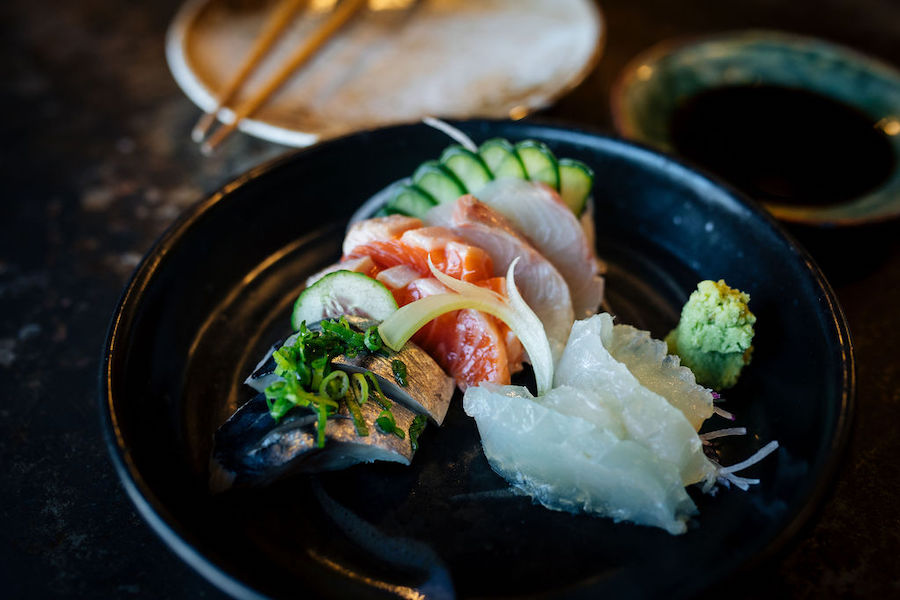 Husband-and-wife duo Thomas Takashi Cooke and Elaine Alden opened this popular Japanese spot on Washington Avenue in 2017, and today keep its menu lean and mean with Japanese specialties like sashimi, udon noodles with duck breast, and okonomiyaki, plus super-interesting plates like mochi “bacon” and broiled oysters with miso custard. Consider sampling it all with the $40 per-person omakase, a multi-course, family-style meal at the whim of the chef—just don’t forget to order a sharable carafe of sake for the table.

Having just celebrated its 25th year in operation, Fore Street is a bona fide culinary institution in the city—and with its dramatic high ceilings, brick walls, and a kitchen decked out with a wood-burning oven, grill and turnspit that’s visible from nearly every seat, it feels like one, too. The menu changes daily and uses as much local produce, meat, and seafood as possible, so in the summer you might find Maine wild blueberries dotting a salad, while roasted rope-grown mussels might be on the agenda in winter. Reservations are available up to two months in advance, and you’ll probably need them. Once you arrive, though, just sit back, relax, and feast on the cuisine that’s kept Fore Street in the forefront of Portland’s dining scene for decades. 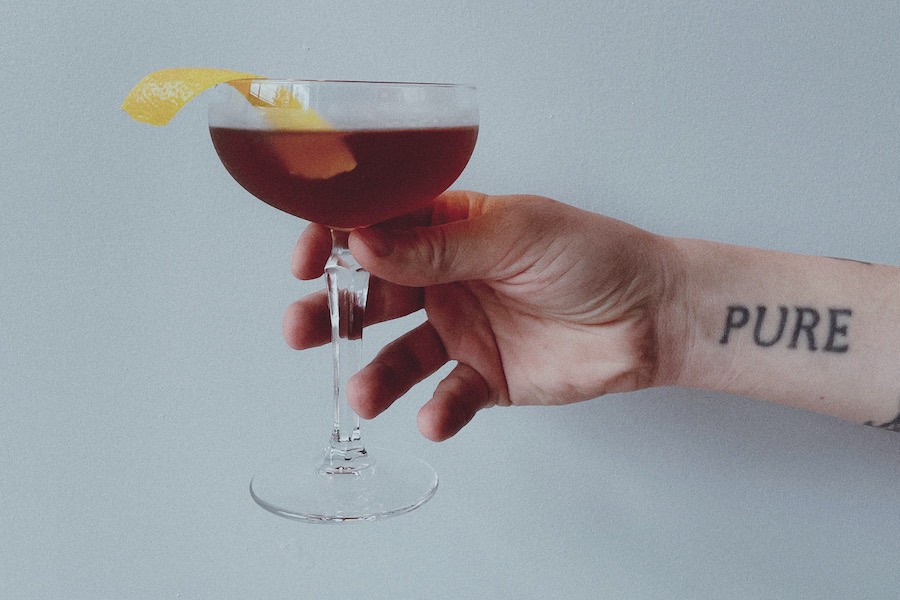 Not unlike Boston, Portland loves a good food truck-founded success story—no wonder, then, that everyone is smitten with Baharat, the happy tale of a mobile Middle Eastern street-food purveyor that turned into a casual brick-and-mortar spot in East Bayside. The reason for its popularity will quickly become apparent once you’ve tried the charred beet kebab, harissa-marinated swordfish shishlik, or savory delicata squash donuts. All of this is matched by a full bar and imaginative cocktail menu, too: We’re partial to the Sour Times, a mix of date-infused bourbon with apricot, sumac, and egg white perfectly suited to the winter season. 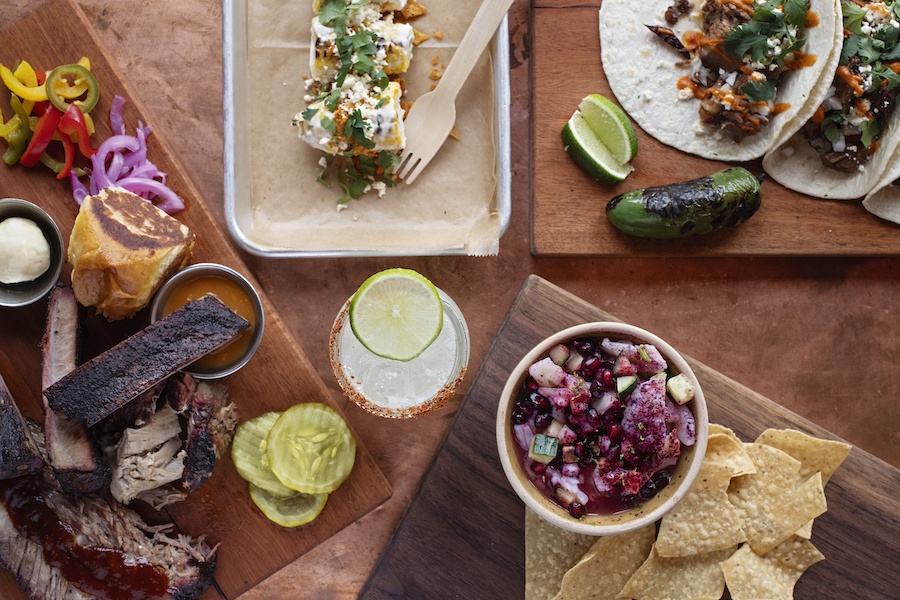 After visiting all the waterfront restaurants in Portland, you’ll probably need a solid break from seafood. For that, turn to Terlingua in East Bayside, which combines Texas barbecue and Latin American cuisine to great effect: Think tacos with smoked brisket and pork carnitas on homemade tortillas, or a BBQ board of house-smoked meats and sides of bacon-dotted corn with lime aioli. If the heated outdoor deck doesn’t warm you up, the margaritas and Mezcal list will do the trick—and you can even take home some goodies from Terlingua’s on-site market, stocked with large cuts of their smoked meat for hungry carnivores, locally sourced foodstuffs, and more.