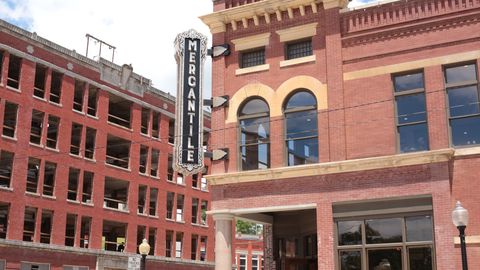 On the day Ree Drummond opened the doors of The Pioneer Woman Mercantile in Pawhuska, Oklahoma, patrons lined up around the block—and business hasn't slowed down much since. Fans of the Food Network star continue to flock to the shop and eatery in droves, just like Fixer Upper viewers making the pilgrimage to Magnolia Market. After recently traveling to Pawhuska ourselves, we can see why it's such a popular destination! The Merc, as Ree affectionately refers to it, is fun, family-friendly, and chock-full of fabulous finds and food. "It's a happy place, it's a delicious place, you won't leave hungry, and you won't leave in a bad mood," Ree told CountryLiving.com. Here's what else you should know before you go.

1. There are two levels.

Located on the corner of Kihekah and Main, The Merc was built in 1910 and originally called Osage Mercantile. Ree and her husband, Ladd Drummond, purchased the property in 2012 and lovingly restored it into what it is today. The 25,000-square-foot building includes a retail store and deli (complete with grab-and-go coffee and goodies) on the first floor and a coffee bar and bakery on the second. On select days, you can even tour The Lodge on Drummond Ranch, where The Pioneer Woman is filmed, just outside of Pawhuska. (Note: Tickets are required, which you can get for free at The Merc.)

Several reviewers have noted that it's smaller than they thought it would be, but there's no shortage of historic charm in the space—including pretty penny tiling in the entry and an old National Biscuit Co. (Nabisco) sign recovered during renovations, which hangs in the dining area. 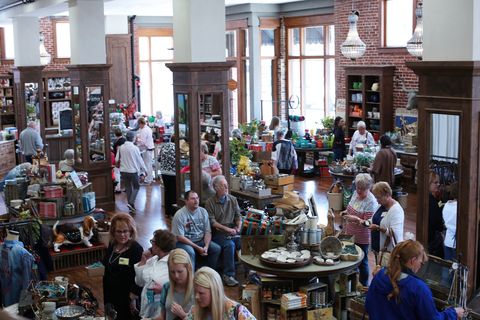 The Merc gets 6,000 visitors a day on average. Yep, you read that right. And occasionally, that number goes up to 15,000 (!). Those stats are especially surprising considering the small size of the town: Its population clocked in at just 3,477 people last year. Which means many of the visitors are out-of-towners on a day trip, or vacationers taking advantage of cozy B&Bs in town and more nightlife options in neighboring towns like Bartlesville and Tulsa.

3. But there are less-busy times to go.

Weekends—particularly holiday weekends—are understandably busy. The Merc's busiest week yet was actually the week of Spring Break 2017, which Ree got a kick out of. "Key West, Padre Island, and Pawhuska," Ree joked. "We're a Spring Break destination—who knew?"

Want to beat the crowds? We've heard non-holiday Mondays and Wednesdays are a bit calmer. An early breakfast (we're talking right when the restaurant opens, at 7 a.m.) or an early dinner (after 3 p.m.) is probably your best bet.

Just don't go on Sunday: It's the only day of the week The Merc is closed. Fridays and Saturdays they're open 7 a.m. to 8 p.m., and every other weekday they close at 7 p.m. 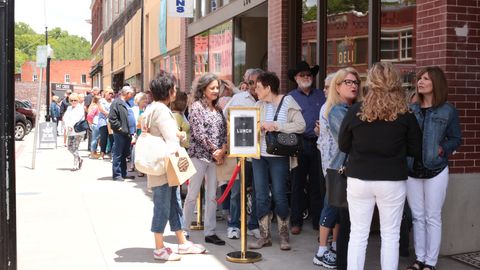 If you're hoping to try out the deli food, expect to stand in line, possibly for as long as three hours. On the day we went, there was a line down the block. Nobody seems to mind too much though (The Merc attracts a pleasant crowd!). Menus get passed around, so you can kill time and decide on your dish—and Ree told us that on Saturdays, there's even a crew that "works the restaurant line" keeping guests entertained with games, prizes, Pawhuska history, and bottled waters. 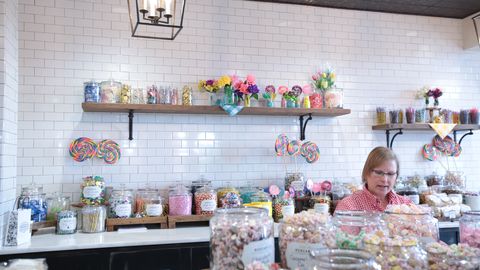 If you get tired of waiting, you can always grab a bite and a coffee at the adorable bakery, which usually has a much shorter line. 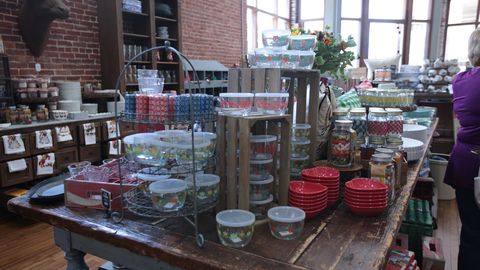 Only there to shop? You should have no problem getting in. You'll be greeted with a shopping basket and a smile. 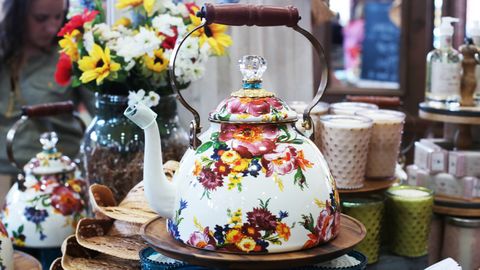 Now the real challenge: Which of the adorable dishes, decor, and quirky gifts to buy? 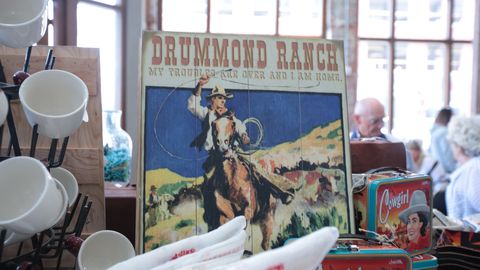 "With the store, I wanted it to have just a little bit of everything," Ree said. "We have some serious things for the dining room and kitchen but then we have whoopee cushions and finger puppets and gag gifts and cute toys. My criterion for picking products was: 'Do I love this and do I want this?' So if it's funny, weird, cute, or pretty, I bought it for the store." 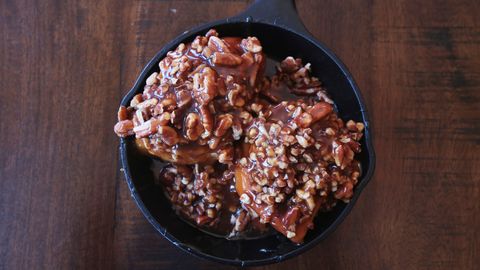 We get it, you probably want to clean up nice in case you encounter the Pioneer Woman herself, but resist the urge to wear heels and grab your walking shoes instead. Oh, and leave your skinny jeans at home: You'll want plenty of room to indulge in Ree's famous comfort food. We'll take an order of sticky buns (served in a cast iron skillet, of course) and mac and cheese, please!

Yet everything is clearly made with quality ingredients. Oh, and there's even a wine list. Bless your heart, Pioneer Woman.

It's not unusual to see Ree and Ladd running around the Merc. Ladd's dad, Chuck, is the Merc's "official greeter" and loves hearing people's stories, and her daughter Paige apparently works as a barista from time to time. If you are lucky enough to get a Pioneer Woman sighting, know that a line will likely form and you might not get a chance to say "hi." Still, Ree is thankful for the support and had nothing but the nicest things to say about her fans when we spoke.

"The Merc is a great place for family reunions," Ree said. Definitely all about food, and you won't leave unhappy. You'll have a good time."