Most Angelenos know Burbank best for being home to a good chunk of the city’s entertainment industry — and perhaps more importantly, one of the county’s only IKEA stores. One thing Burbank doesn’t get a lot of attention for, though, is its restaurant scene… but if you do find yourself looking for tasty eats in this city sitting in the shadows of Hollywood, you’ll find yourself pleasantly surprised with the dining options. Go ahead and get those tickets to an Ellen taping or studio tour — prosciutto pizza, customizable s’mores, and vegan sausage await you in Burbank. 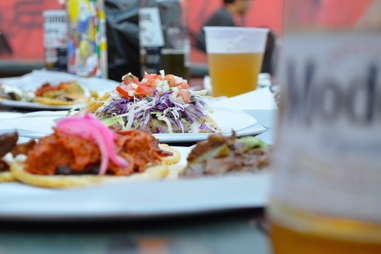 Handmade tortillas and traditional guisados
All five locations of this homestyle Mexican joint get their braises and masas delivered from the original Boyle Heights restaurant several times daily. It’s all used to create the handmade tortillas and traditional guisados (slow-cooked, spice-heavy stews) that serve as a base for the tacos, like pork chicharron simmered in chile verde and shredded chicken in a poblano-style mole. Bonus for vegetarians: There are legit meatless options here (not just we-took-out-the-meat BS) including mushrooms with serrano chiles and squash and bell peppers with corn and chipotle cream.

Pizza place with authentic Roman roots
It’s all about the crust at this pizza spot opened by a couple of Romans just last summer. The dough is derived from a traditional recipe from their hometown, made with multigrain flour and fermented 72 hours, yielding that coveted crunchy-on-the-outside-chewy-on-the-inside outcome. They only sell individual pies (no slices), including a traditional Margherita, a creamy Cacio e Pepe, and the top-selling San Daniele (topped with 24-month-aged prosciutto and buffalo mozzarella flown in weekly from Italy). The menu also features some salads, stuffed-and-fried rice balls, and panini made with bread from that same real-deal dough.

The History of the McRib

Cool and casual spot for an after-work bite
The Burbank outpost of this quartet of comfortable-and-casual restaurants is the perfect venue to chill at the end of the day. The menu skews toward upscale comfort food with shareable starters (think smoked salmon spread, grilled cheese dippers with tomato soup, and a smattering of flatbreads) along with bigger plates of burgers, sandwiches, and entrees like ahi over soba noodles and a bone-in pork chop. The cocktail, wine, and beer selections are massive (in case your workday was a doozy) ,and there’s also a happy hour from 4pm to 7pm on weekdays.

Remodeled hilltop giant with killer views
This massive hill-perched restaurant once best known for banquets and brunch buffets reopened in 2018 after a massive $10 million facelift. The nautical kitsch has given way to a modern look and the multi-level seating (including an expansive patio) means most everyone gets a view of the valley. While the name still makes us think of seafood, new executive chef Perry Pollaci (formerly with The Royce at The Langham) is going with a steak focus, and Castaway even has its own in-house aging room with a Himalayan salt wall these days. 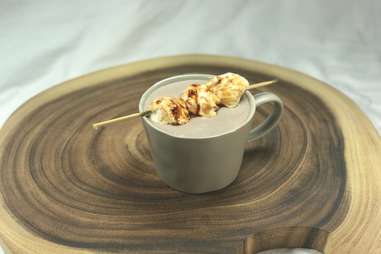 Make-your-own s’mores bar
After more than a decade selling her all-natural scratch-made marshmallows online, Plush Puffs founder (and former USC health educator) Ann Hickey-Williams opened this shop/marshmallow bar attached to her commercial kitchen earlier this fall. Customers can toast up one of the multiple flavors — from birthday cake to caramel swirl — then pair them with the shop’s signature graham crackers, sauces, and toppings for serious s’more-ing. You can also expect coffee, hot cocoa, and teas (that can all be topped with the marshmallows), in addition to take-away treats.

Vegan bar fare and craft beer
After Tony Yanow and his Artisanal Brewers Collective took over this long-standing divey dart bar in 2010 (the same-name-thing is just a coincidence), the group spruced up the place, (un)beefed-up the vegan menu options — as they’ve done at several spots around the city in recent years — added a killer craft brew selection, and set out on a zero-waste crusade. In addition to lots of plant-based options from Impossible Burgers to veggie chili, the bar’s renowned real-meat sausage selection remains (though a vegan offering can be swapped in for any of them). If you’re looking for remnants of the original 1978 venue, you can find it via a vintage Dart’s Away sign on the wall and a single original employee named Sandra.

Fresh breakfast fare and espresso bar
Expect innovative dishes with plenty of locally sourced, seasonal stuff and a menu with something for everyone: avocado toast for the hipster crowd; eggs and bacon for the basic breakfast lover; and ciabatta breakfast sandwiches along with fresh baguettes, butter, and in-house jams for carbo-loaders. Look for a serious selection of Intelligentsia-derived drinks at the espresso bar, and an impressive marketplace to grab stuff for later. There are also lunch and dinner menus with salads, sandwiches, and small plates.

Solid date-night spot with small plates
The place bills itself as a haven for global small plates, which basically means you can expect everything from snapper ceviche to bacon bruschetta to a rainbow beet salad. It’s intimate-yet-lively, and has plenty of reasonably priced wines by the glass, plus cocktails. In other words, if you’re dating in Burbank, this is probably going to be your go-to reservation.

Renowned fried chicken plus Southern sides
By now, you know all about this the Memphis-originated chicken chain that first impressed Angelenos at its Crenshaw location. The no-frills space (complete with checkered vinyl tablecloths and paper plates) serves its hot-and-spicy specialty with Southern-style sides like baked beans, mac and cheese, and potato salad. For a double-dose of deep-fried flavor, start with the okra, pickles, or green tomatoes. 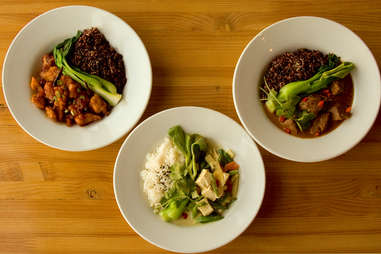 Thai food and buffalo wings
If you’ve grown used to the mediocre spot down the block that can have your order ready in a frightening three-and-a-half minutes, up your Thai game at this restaurant focused on a compact-but-mighty menu of classics (along with three styles of buffalo wings thrown in for namesake purposes, we assume). There’s a small offering of lunch specials, and the beef Panang curry tastes even better than it looks.

Fabled Cuban bakery
This classic Cuban bakery with locations throughout the SoCal cranks out a ton of baked goods, pastries, and cakes at bargain prices. You should expect a line and, while you're in it, make up your mind before it's your turn to order. With a selection this scrumptious, that's no easy feat — consider going for the guava cheese strudels, and both the sweet and savory empanadas. While they're not exactly “baked,” don't even bother trying to leave without a box of the signature potato balls. It's impossible. 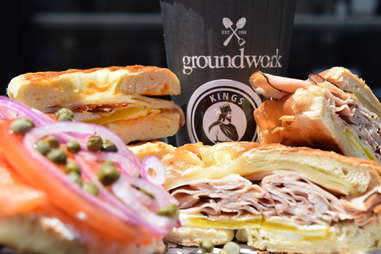 NY-style deli near Warner Brothers
A stone’s throw from the Warner Brothers lot, this tiny deli is the place to go for NY-style sandwiches piled with housemade pastrami, brisket, corned beef, and tuna salad, in addition to a few veggie options, and everything comes with a side of potato salad or coleslaw and a smattering of pickle chips. Basic breakfast sandwiches on bagels or toast are offered all day along with espresso drinks in case you need to pep up on your way to the studio.

Sign up here for our daily LA email and be the first to get all the food/drink/fun Los Angeles has to offer.