When it comes to food, it's safe to say Texas is known for two things: barbecue and tacos. We can bet that there will never be a shortage of either in the Lone Star State.

But the opposite probably holds true for Cajun cuisine. You can imagine the concern that creates for those in need of a Louisiana-flavored fix. Although authenticity is scarce, there are certain places where you can find the real deal. From holes in the wall to food trucks, to places that are open only one day a week, we've got the scoop on spots serving southern Louisiana classics.

Born and raised in Lafayette, La., Jermaine Paddio never planned on owning a food truck. It was his search for legit Cajun food in North Texas that led him to it.

"Me and my buddies were going to all of these Cajun spots, but they weren't good," Paddio says. "They weren't the same as home."

Paddio would always boil crawfish for his friends. "That's what we did growing up," he says.

This gesture sparked the idea for Paddio to be the Cajun persuasion he'd been searching for all along. So at the end of 2014, he spent time thinking, creating and planning. In 2015, he used money from his 401(k), paid for his truck in cash, and started selling crawfish in a Big Lots parking lot. And the rest is history.

"We started doing crawfish boils at The Daiquiri Shoppe in Carrollton, which brought us a lot of exposure," Paddio says. "And we took off after we got recognized on the radio." 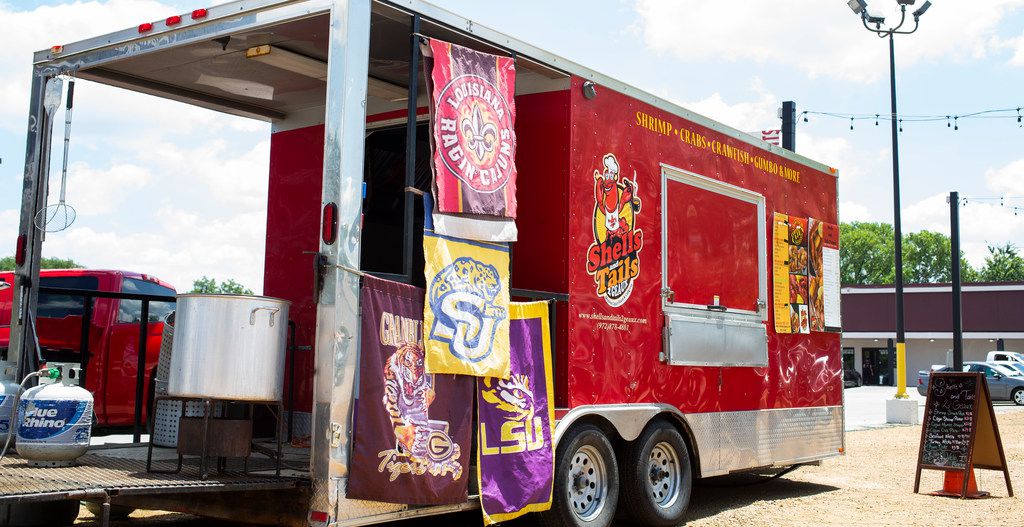 An exterior view of Shells and Tails 2 Geaux located at 324 E. Belt Line Road in DeSoto.

The menu has evolved over time. Paddio started Shells and Tails thinking he would serve only crawfish, but he later introduced other Louisiana favorites like crab, shrimp and gumbo. And Shells and Tails' crawfish still reigns supreme when it comes to flavor.

"Where we're from there are two spices: hot and extra hot," Paddio says. "We boil our water, put our seasoning in the water while it's boiling, and then drop our crawfish in for about five minutes. Then we cut it off and let it soak for 20 minutes. The longer it soaks, the spicier it gets. That's what makes us different. That's what makes it Cajun." 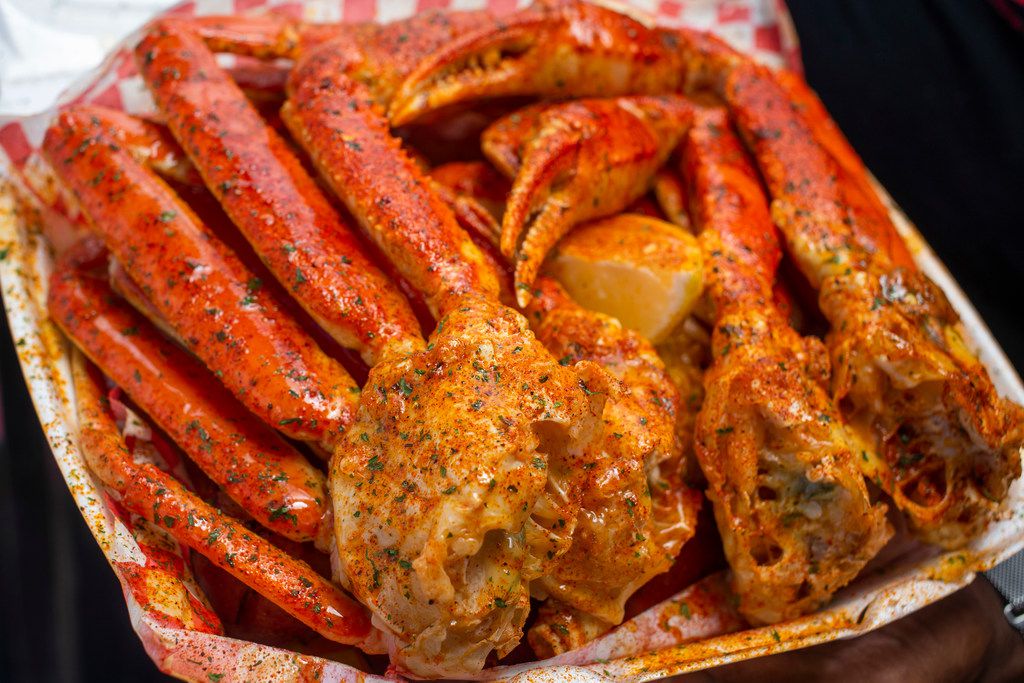 Chef Jermaine Paddio's "Man Down" dish at Shells and Tails 2 Geaux in DeSoto.

Another Shells and Tails staple is the "Man Down" – 2 pounds of snow crab, corn, potatoes and sausage – named for the slogan used by DeSoto boxer Errol Spence Jr.

"He comes by on the regular," Paddio says. "That's why we named the platter after him, because he gets the same thing every time."

Paddio is in the process of opening a brick-and-mortar location at the end of the year. For now you can find him outside the Grow DeSoto Market Place Wednesday through Saturday. 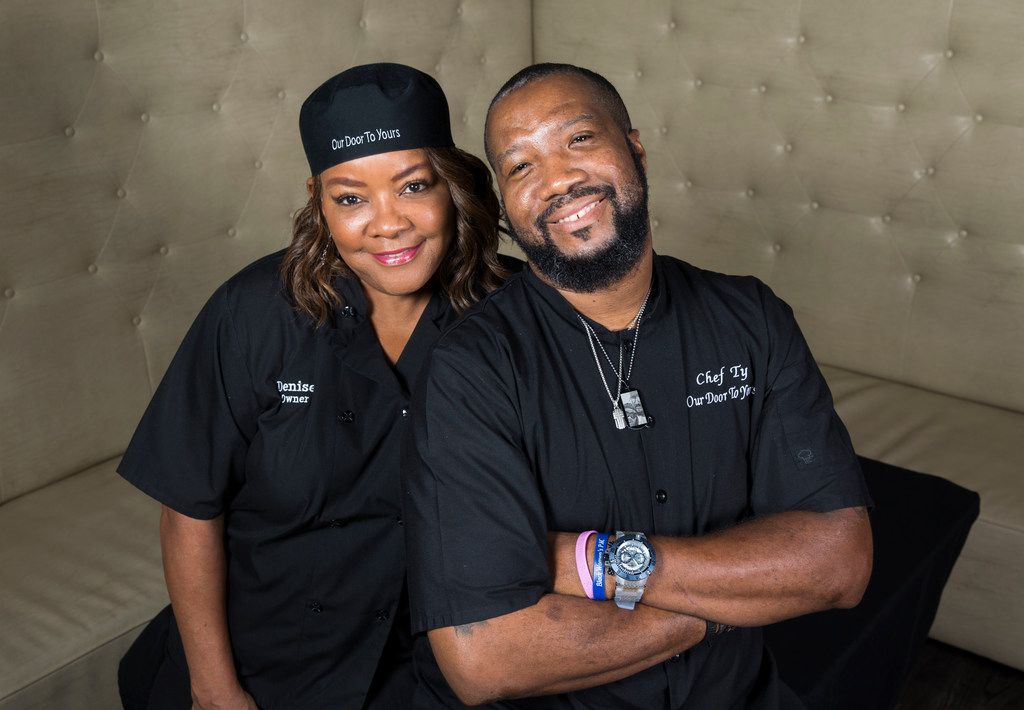 Our Door to Yours owner Denise Harper and her fiance, chef Ty Frazier.

Head up I-35 and you'll find another spot dishing out Cajun classics, but with a twist. Ten Eleven Grill operates as an event space for rent throughout the week, but on Sunday it transforms into a soul food sanctuary. And Chef Ty Frazier and fiancee Denise Harper of Our Door to Yours catering are responsible.

"I grew up cooking, but I also grew up playing a lot of sports," Frazier says. "When I got done with my baseball career and football career, I wanted to do something that made me happy. Cooking made me happy."

After attending culinary school at El Centro College and working as a dishwasher at Pappadeaux, 15 years later the Shreveport, La., native is taking everything he learned and creating over-the-top dishes. Along with "Scrimp and Grits," one of Frazier's most popular dishes is the "All Tyed Up." 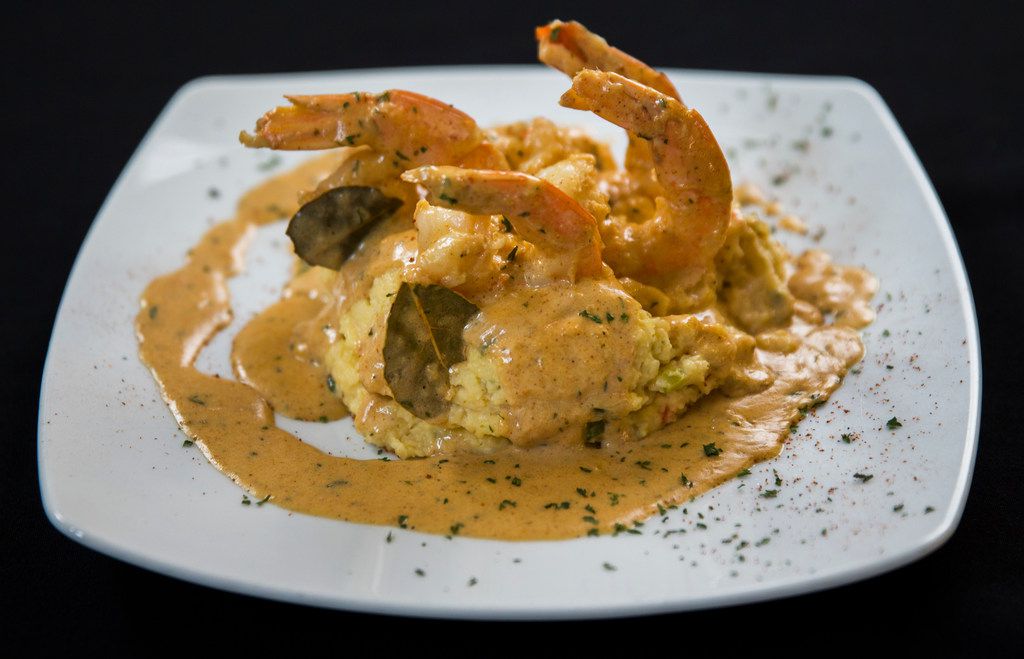 The "Scrimp and Grits" plate at the Ten Eleven Grill in Dallas.

The weekly Food for the Soul Sunday Brunch takes place at Ten Eleven Grill from noon to 6 p.m. Reservations are strongly suggested. 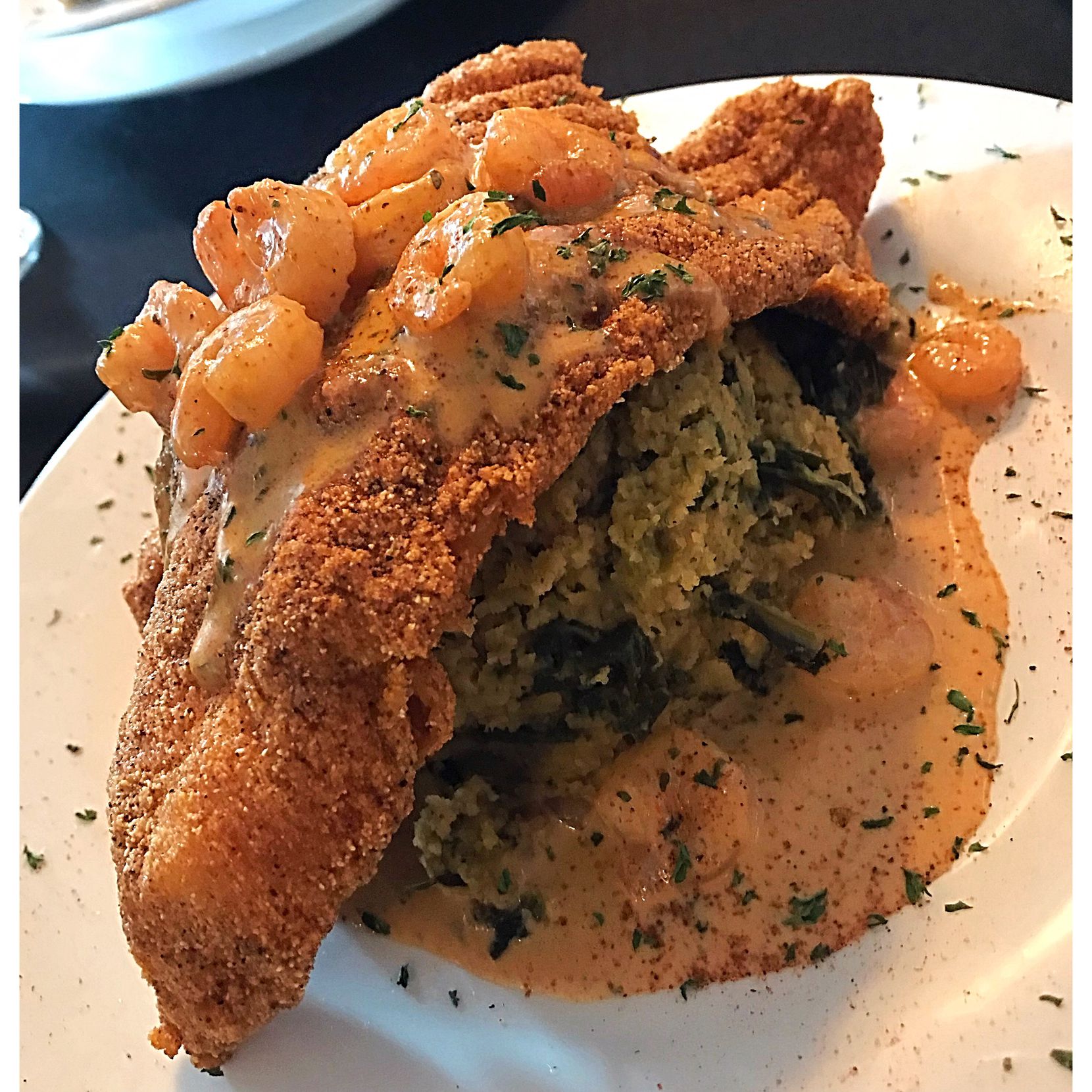 The "All Tyed Up" at Ten Eleven Grill features cornbread dressing, shrimp and deep-fried catfish.

Lewisville could very likely be the last place you'd think to go looking for a Cajun meal, but tucked away in a shopping plaza is a hidden gem – Bayou Market. What separates this place from the rest is that it not only serves food but also offers a slew of Louisiana staples for sale like seasonings, meat pies, and Abita root beer. Current owner Miriela Caraballo worked with the previous owner, a Louisiana native, for 10 years before taking over. Bayou Market's menu boasts an array of Cajun classics from crawfish etouffee to seafood gumbo and po'boys. 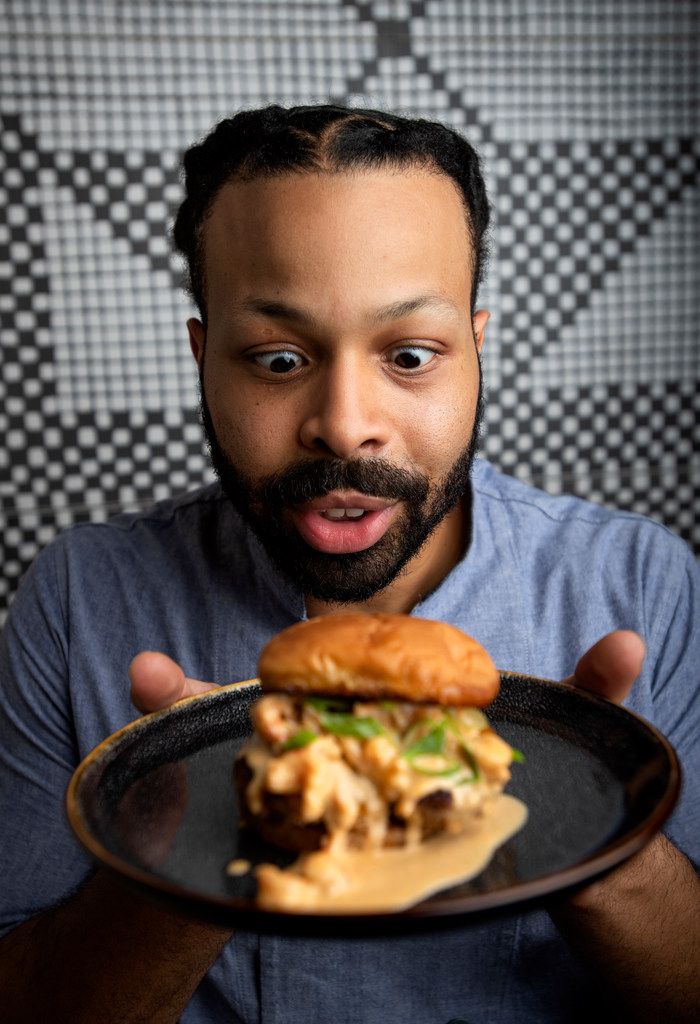 Temple, a private chef, is a New Orleans native who's fairly new to the D-FW area and adamant about giving North Texans a taste of his hometown. One of his Cajun specialties is a crawfish turkey cheeseburger. Temple went viral this past Mardi Gras season with his king cake beignets, something he created on a whim because he missed home.

Temple hosts a weekly Facebook Live show, Hunger Trap,  on Tuesdays at 9 p.m. You can also find recipes in his book, Southern Creole: Recipes From My New Orleans Kitchen. kennethtemple.com. 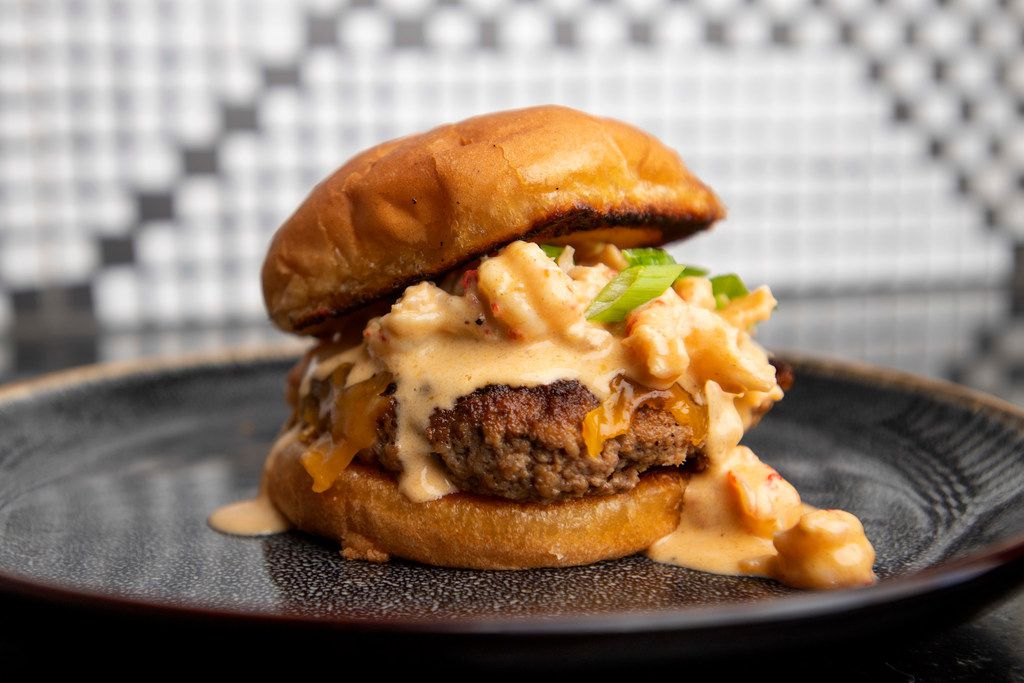 Ask around for good seafood, and it's likely someone's going to mention Aunt Irene's. Located on Malcolm X Boulevard in South Dallas, Aunt Irene's Kitchen serves everything from seafood potatoes to fried catfish. The dish that gets the most praise is the "Black Box": a box full of shrimp, crab legs, sausage, corn and potatoes, all seasoned to perfection.

Yes, there is a such thing as Cajun vegan food. And Vegan Food House in the Bishop Arts District is doing it right. The restaurant's Cajun specialty? Shrimp and grits: blackened "shrimp" (Vietnamese root) with sautéed onions and peppers served atop creamy grits blended with a house-made plant-based cheddar cheese.