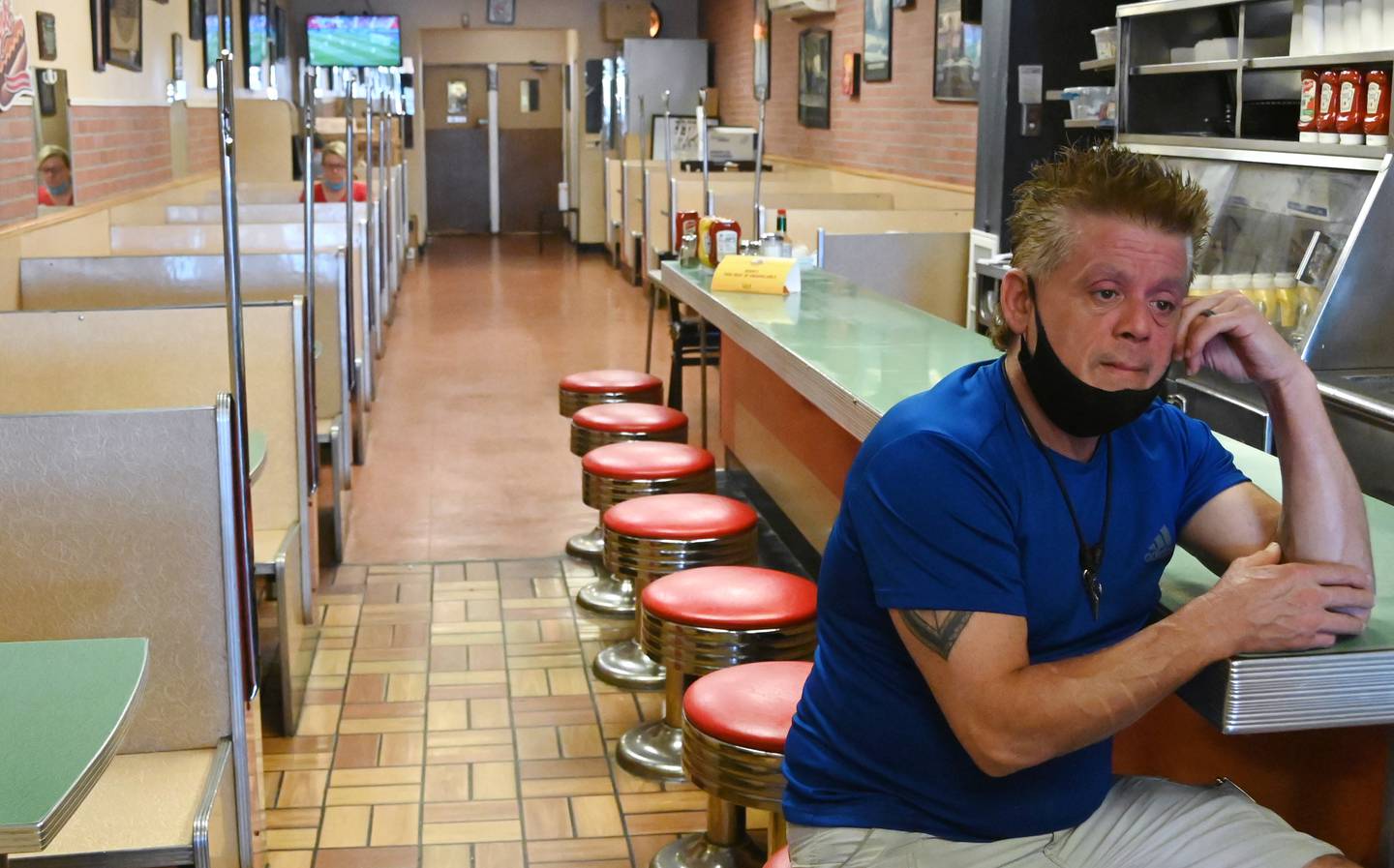 Andy Farantos slides a plate of fries and gravy across the counter with a warning. Once you eat these, he said, you won’t ever want to go anywhere else.

A few bites in and it’s hard to argue with him. Golden brown and piping hot, they call to mind the boardwalk on a hot summer day from childhood.

Some restaurants succeed by staying current, offering the latest food of the season. Others thrive on continuity: Customers love them because they never, ever change.

G&A Restaurant, a Highlandtown rowhouse diner that opened in 1927 as “home of Baltimore’s best Coney Island hot dogs,” falls into the latter category. In the decades he’s been running the restaurant, the third generation in his family to do so, Andy Farantos has altered little about the place. The teal countertop still bears the smudgy marks from generations of elbows. During a recent visit, most diners said they had been coming in for most of their lives.

But in a few weeks, Farantos will close up the Eastern Avenue diner and relocate the whole business to White Marsh’s Philadelphia Road. The new location, in a strip mall where Route 7 intersects New Forge Road, is set to open in early September. For regulars, it marks the end of an era and a reminder of just how much Highlandtown, and the city itself, has transformed.

“Everything is gone now,” said customer Cherylann McCullough, in between bites of French fries, which she called “nice and crispy.” Now 63, she estimates she’s been coming to the restaurant since she was 4. She just hasn’t found better food anywhere else.

During a lull before the lunchtime crush, Farantos, 55, looked wistful. It’s hard, he admitted, to say goodbye. Uncles of his got their introduction to the food service industry there before moving on to start their own restaurants. His now-grown children earned extra cash by waiting tables here.

After 94 years in Baltimore, G&A Restaurant is relocating to White Marsh. Andy Farantos, who runs G&A with his wife, Alexia, is the third generation in the business. His Greek-born ancestors opened the Highlandtown restaurant to sell Coney Island hot dogs. (Kim Hairston/The Baltimore Sun )

There isn’t too much time for grief. Customers walk in and need to be greeted and seated. On any given visit, diners can expect to see him darting between ringing up orders and manning the grill in front of the window. Should a line start, he’s confident he can get to everyone in minutes. “Four up on two!” calls a server — it means four Coney Island hot dogs, fully dressed with mustard, chopped onions and chili, served on two plates.

An appearance years ago on Guy Fieri’s “Diners, Drive-Ins and Dives” helped launch G&A into a bona fide tourist destination. Farantos’ wife and business partner, Alexia, 53, said guests have come from Alaska, Hawaii and France. A signed photo of the cast of HBO’s “Sopranos” hangs above the cash register. The group decided to make a detour while filming an episode in Maryland. Other high-profile visitors included Tom Hanks, Ron Howard and Henry Winkler, who stopped by on a tour of national ballparks. Winkler even handed Farantos a signed, framed portrait of “The Fonz” that he had in the trunk of his car.

Those photos will be in packing boxes soon. But Farantos said he doesn’t plan on bringing everything with him to White Marsh.

“I don’t want to take this and try to replicate it, because you can’t,” he said.

From left, Ed Sullivan and Kevin Turner, owners of AAA Air Conditioning and Heating Co, have lunch at Restaurant. After 94 years in Baltimore, G&A is closing up and relocating to Baltimore County. June 18, 2021. (Kim Hairston/The Baltimore Sun )

The idea to specialize in Coney Island hot dogs came to his grandfather and his cousin, Gregory and Alex Diacumacos, on their way to Baltimore from Sparta, Greece.

Despite the name, the Coney Island hot dog doesn’t actually refer to the beachside neighborhood in Brooklyn. (Though that is where a Polish immigrant named Nathan Handwerker helped popularize the frankfurter and an annual hot dog eating contest takes place each July 4.) Instead, it’s a dish that Greek immigrants came up with while living in New York City, Farantos said.

“Each family had their own chili recipe,” he said.

Tasty and cheap, the dogs in Baltimore became a sought-after item among people who worked in the area. G&A Restaurant was an after-work stop for blue collar employees of Bethlehem Steel, General Motors, Westinghouse and nearby canneries and a broom factory. On weekends, customers stopped in for a bite after shopping at Eastern Avenue stores like Epstein’s. (Neighbors say Eastern Avenue was considered ‘The Avenue” before Hampden’s 36th Street nabbed that title).

Andy Farantos, owner of G&A Restaurant, balances six Coney Island hot dogs on his arm as he fills a carryout order. After 94 years in Baltimore, G&A Restaurant is closing up and relocating to White Marsh. Farantos, who runs G&A with his wife, Alexia, is the third generation of his family to own G&A. His Greek-born ancestors opened the Highlandtown restaurant to sell Coneys in 1927. June 18, 2021. (Kim Hairston/The Baltimore Sun )

The diner has hung on long after industry left, and remained even as many of the Greek immigrants who lived in the area departed for Baltimore County. Today, the neighborhood is predominantly Latin American. Men in trucks parked along the street hack huge green coconuts and serve them to customers with straws. Latin bakeries sell Mexican sweet breads called conchas, named for the seashells they resemble.

While the pandemic was a particularly exhausting time to be in business, Farantos said it wasn’t the cause of his decision to relocate. Rather, he wanted to be closer to his home in Baltimore County and away from the stresses of city life. He’s tired of having customers show up under the influence; one pulled a knife on him.

And, Farantos said, most longtime patrons have moved out to the suburbs of Baltimore County. They “don’t want to come to Baltimore City,” he said.

Andy Farantos rings up a carry out order for James Simmons, Highlandtown. After 94 years in Baltimore, G&A Restaurant is closing up and relocating to Baltimore County. Farantos, who runs G&A with his wife, Alexia, is the third generation of his family whose Greek-born ancestors opened the Highlandtown restaurant to sell Coney Island hot dogs. June 18, 2021. (Kim Hairston/The Baltimore Sun )

Get the scoop on that new restaurant, learn about chef changes and discover your favorite new recipe. All your Baltimore food news is here.

Some customers still live here, though.

“I’ll miss it,” said 82-year-old James Simmons, who was picking up an order of four Coney Island hot dogs during a recent visit.

Others said they already had scoped out the new location, to make sure they know where to go.

“I’m definitely going” to the new location, said Bob Lipka, 67, a 50-year customer of the restaurant.

A new restaurant will fill the vacancy on Eastern Avenue, Farantos said, but the G&A name and family recipes will come with him to White Marsh.

Leaving Baltimore, with all its quirks, “is a bittersweet feeling, believe me,” said Alexia Farantos, reached at the restaurant Wednesday morning. “I know when I walk out the door for the last time I’m going to start bawling. I’m thinking about it right now and I’m getting teary.