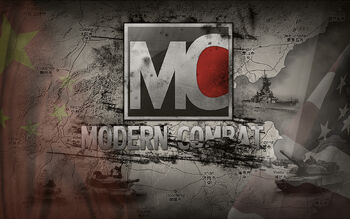 While development on the campaign is still ongoing, the mod is based around a fictional war between the United States Armed Forces and the People's Liberation Army, starting due to various political actions concerning a large oil reserve discovered in and around the Philippine Islands in the Western Pacific.

The Modern Combat Mod removes the official factions of Company of Heroes and replaces them with the respective armies of the USA and China. Along with new, pacific themed maps, the mod completely revamps the armies of the two nations, with all new units and doctrines.

In addition, a new gamemode, called Hardcore, was included in the mod. Developed in an attempt to make the game more realistic, in essence this mode significantly reduces the amount of health units have, overall providing a much more unforgiving experience. This means that infantry squads in the open can be cut down in a matter of seconds by a well-positioned rifleman team, and armoured vehicles can be knocked out in a single shot from an anti-tank missile. This game mode also makes minor changes to the abilities of some specific units, and the way territory is captured. Hardcore can be played in either Victory Point Control or Annihilate.

A faction dependent on munitions to maintain and strengthen its units, the US remains a highly mobile and technologically advanced faction, allowing its base building tents to be deployed anywhere on the map for faster deployment at the cost of reduced safety against enemy search and destroy teams. Fast and unyielding, the forces of the US are well trained and can fight on any terrain after decades of widespread deployment on battlefields all over the globe.

While lacking in advanced equipment and dependent on fuel to keep its armies in the fight, the PLA is still a force to be reckoned with, as it has both a mixture of cheap units for massing and expensive units with undisputed firepower. Specializing in mobile artillery and a seemingly unending human resource pool, the Chinese forces are versatile and battle hardened, ready for victory in the Pacific.