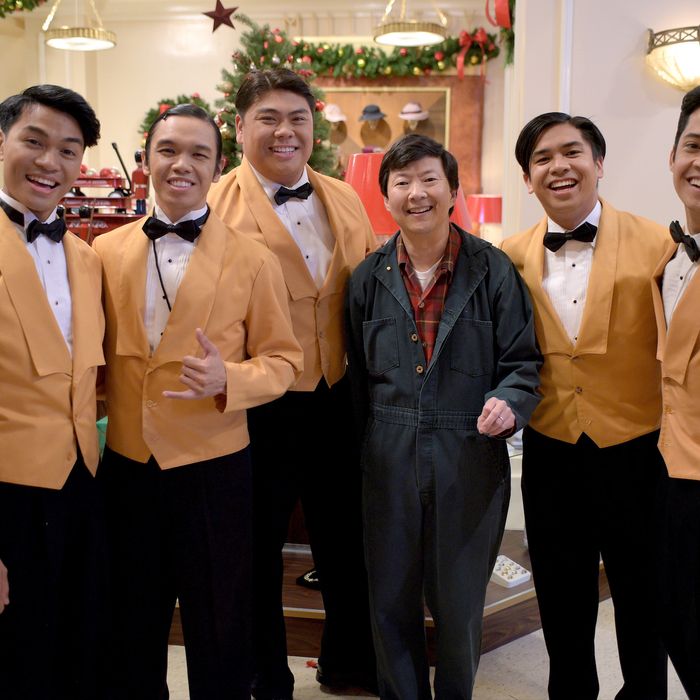 When families and “You’ll shoot your eye out!” obsessives gather ‘round the old flat-screen to watch Fox’s ambitious musical event, A Christmas Story Live!, they may notice a few adjustments to the beloved 1983 film that inspired the special.

Unlike the original film — which starred Peter Billingsley as a boy desperately pining for a Red Ryder carbine-action two-hundred-shot Range Model air rifle in 1940s Indiana — it’s a musical based on the 2009 production by Dear Evan Hansen’s Benj Pasek and Justin Paul, who wrote a slew of new songs for the Fox event. (The production also enlisted Matthew Broderick to play grown-up Ralphie as the show’s onscreen narrator.)

Fans of the movie will notice that the production deviates from an almost entirely white cast to include a more diverse group of performers, including Maya Rudolph as Ralphie’s mother, David Alan Grier as the surly department-store Santa Claus, Fred Armisen as a store elf, Ken Jeong as a Christmas-tree salesman and Chinese-restaurant owner, and scores of other actors of color who appear as townspeople, Ralphie’s classmates, and in a myriad song-and-dance numbers.

But the most noticeable update comes toward the end of the production, during the Chinese-restaurant scene when a group of Asian waiters sing “Deck the Halls” for Ralphie and his family on Christmas day. The original film depicted the waiters as performing the song with stereotypical mispronunciation, singing the song’s refrain as “Fa ra ra ra ra” instead of “Fa la la la la.” But in this version, the quintet — in real life, the a cappella group Filharmonic — performs the classic carol flawlessly.

After an exclusive dress rehearsal Saturday night on the Warner Brothers lot in Burbank, Ken Jeong told Vulture that director Scott Ellis, producer Marc Platt, and writers Robert Cary and Jonathan Tolins updated the script with these changes before he signed on, which helped to allay any fears he had about how the scene might be interpreted. “Scott directed my show Dr. Ken and knows that my whole career has been about tackling these sensitivities,” Jeong said. “I finessed a few things with them, but everyone was onboard.”

One noticeable contribution made by Jeong and Ellis is one of the funniest lines in the production: After the waiters finish their song, Ralphie’s father, played by Chris Diamantopoulos, says, “I wasn’t expecting that!” to which Jeong’s character replies, “What were you expecting?”

“We did a number of table-read workshops with Chris and Maya probably about a month ago, and it just worked,” said Jeong, who added that their goal from the beginning was to honor the source material through a modern lens. “We wanted to do something that realistically felt like it took place in the 1940s, but also asked, what if this was a progressive town?” he said. “We talked about how my character was working two jobs — as tree salesman and in a restaurant — but he’s very assimilated. He has three sons, he’s very progressive and hardworking. He’s very American. So, it wasn’t about transplanting a 2017 Asian-American into the 1940s; it was about creating a new world in which this could all actually happen.”

David Alan Grier said he felt that the production overall addresses the diversity issue in a more “natural” way as compared to other recent similar efforts. “Remember NBC’s live Sound of Music? Audra McDonald was a black nun living in Austria? What was going on there?” Grier laughed. “That was the real story for me.”

He said the updated Chinese restaurant sequence reminded him specifically of his early years living New York. “All the Asian people I knew spoke like Rocky Balboa,” he said. “They were very much American. That’s what this country is. We don’t need a cultural lesson. We just need to show it.”