Earlier this month, actress Priyanka Chopra Jonas announced her new restaurant, Sona in New York City's Flatiron District, on Instagram. "Sona is the very embodiment of timeless India and the flavours I grew up with," she wrote.

But the story of Sona, which entrepreneur Maneesh Goyal and restaurateur David Rabin are debuting with creative partner Chopra Jonas on Thursday, starts in Texas four decades ago. 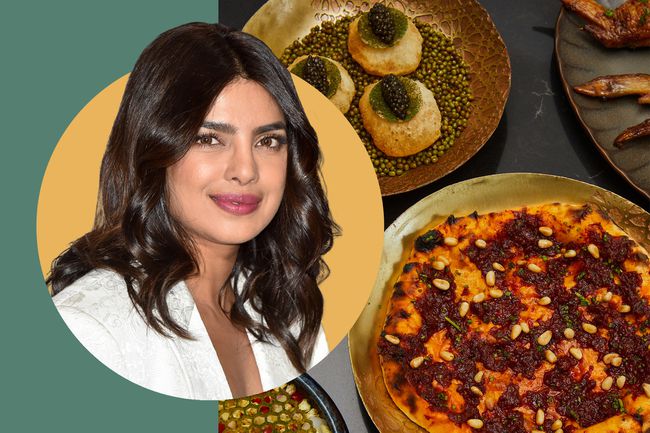 In May 1975, Goyal's father opened India House in Dallas, which he says was the first Indian restaurant in Texas. Goyal's father, who also worked at Xerox at the time, started India House because he had a growing family to support: Goyal, who has an older sister and an older brother, was born just a couple months prior.

One menu item at Sona is known as India House's butter chicken. This dish, with charcoal-smoked chicken tikka and tomato gravy, is based on the exact recipe that was used in Dallas.

The food that chef Hari Nayak is cooking at Sona includes other loving nods to the past, including a dish called Floyd's Goan fish curry. This dish honors award-winning chef Floyd Cardoz, who died of COVID-19 in 2020. Cardoz ran the pioneering upscale Indian restaurant Tabla in the neighborhood that's now home to Sona.

"This was done with the blessing of his lovely wife, Barkha," Goyal said. "Floyd was the original pioneer of Indian cuisine in America. Floyd just meant so much to us."

Sona's menu explores Indian food with regional specificity, traveling from the streets of Mumbai to the beaches of Goa. "Our chef, who is from Mangalore and trained under Daniel Boulud, is super proud to be Indian in his core," Goyal said of Nayak. "When we started to talk about a menu, he was clear early on: He said we need to represent the entirety of India."

The food also gets playful. There are samosas filled with goat cheese and spinach. Crab puri comes with caviar. Kofta korma is made with Dancing Ewe Farm ricotta. Aged cheddar dosas pop with a turmeric-edamame mash. One idea that Chopra Jonas had was to start dinners with a riff on golgappa shots, which are liquid-infused street snacks that Sona fills with vodka, tequila, or spiced water. 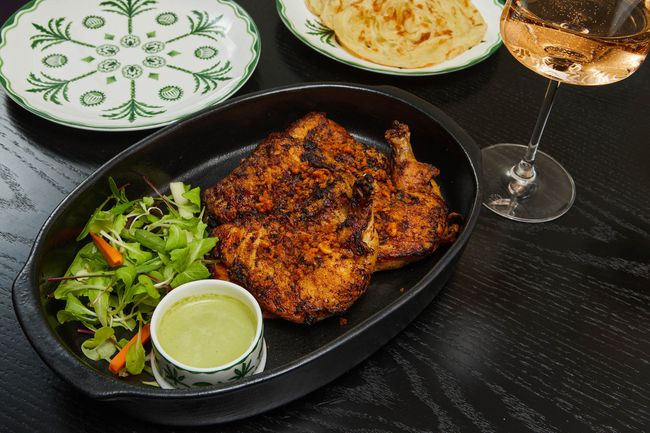 Goyal, who befriended Chopra Jonas when she was in New York filming Quantico, is a self-described "voracious entertainer" who's known for throwing lively dinner parties at his loft. He's often been asked to recommend Indian restaurants in New York. What he realized was that he had hole-in-the-wall picks and places that satisfied specific cravings, but something was missing.

"I didn't have a fun place where it was like, get a group of friends and go there," Goyal said. There wasn't a Mr. Chow or a Cosme or a Balthazar or an Indochine of Indian food, so Goyal started talking to his longtime friend Rabin (of The Lambs Club, American Bar, Jimmy, The Skylark) about how to create one.

"If you could dream up what an Indian brasserie would be, that's the kind of spirit we're looking for at Sona," Goyal said. "It's boisterous yet elegant. … We were relentless about location because we did not want this to be a fringe restaurant. People assess you based on your location. From the first second that people heard we were next to Gramercy Tavern, we were legitimized."

Chopra Jonas has been "the muse" of Sona throughout the creative process, Rabin said. She's met with the team to discuss everything from the food to fabric choices to color choices. She's provided lots of input to Goyal, Rabin, and designer Melissa Bowers about the vibe of the restaurant. "What's so cool about working with her is that she is unabashedly Indian," Goyal said of the actress.

This is the first restaurant for both Chopra Jonas and Goyal. Goyal knows it's a privilege for him to open a restaurant that wasn't born out of necessity. He knows that having an Indian restaurant where he can think about being fun and glamorous and cool is far different from the experience and sacrifices of many restaurateurs who came before him.

One of the first things you'll see when you walk into Sona is a family portrait with Goyal's parents and their children standing in front of India House.

"The thing is, my father was raising a family of five, taking a gamble, and opening the first Indian restaurant in the huge state of Texas," Goyal said. "My mother didn't drive. So he took her to doctor's appointments and classes. He was playing double duty. We were trying to live that American life and that American dream, in some respects. I'm coming to it less from a survival standpoint, admittedly, and much more from a pride standpoint."

"I feel like I have to do this," he continued. "Where's a really fun great night out with Indian food? If I can't answer that question, I have to do something. That question should have an answer."

Goyal thinks about the grandparents he never knew because they didn't ever come to America. And he thinks about his cousins, nieces, and nephews. He wants to "build a bridge for that next generation" and help them stay connected with their food and their culture.

"I feel pride and I feel obligation," Goyal said. "That's what fueling me, but it's a very different fuel than the fuel my father had."