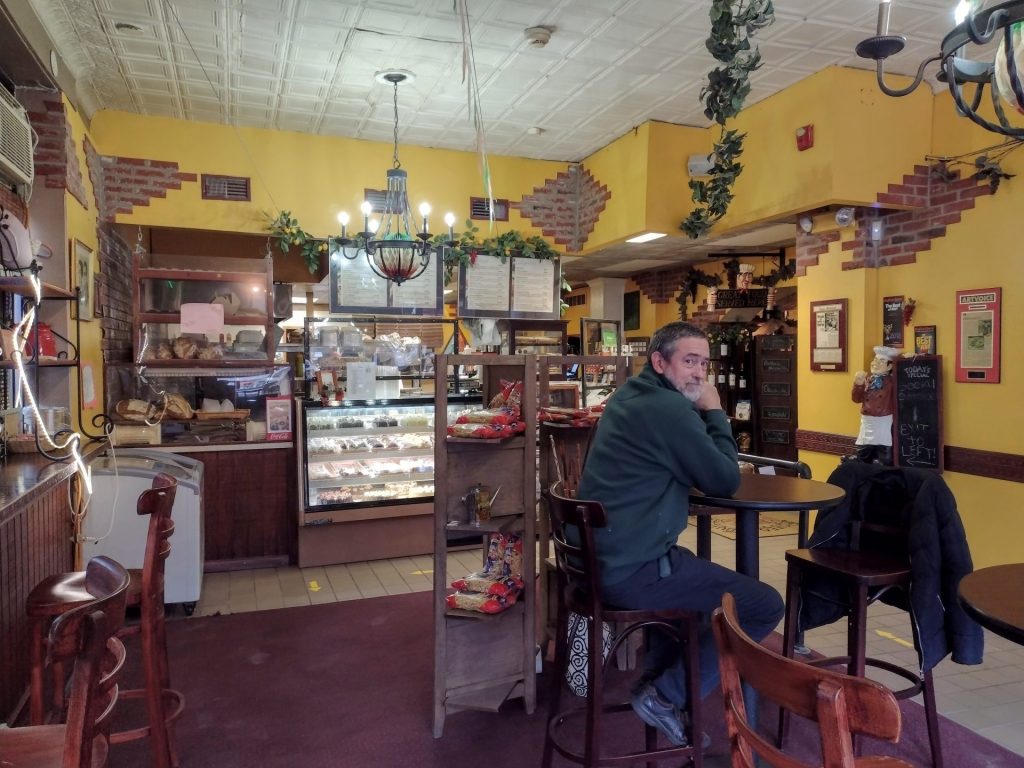 Disclaimer: We’ve received no compensation from Romeo & Juliet’s for writing this post. We simply want to highlight locally owned small businesses for their hard work supporting our neighborhoods.

Tim & I are pretty social, and we love to be on the go most of the time. Don’t get me wrong, we love to relax too. But often, when we go for a run, a walk, or a bike ride, we enjoy something social afterwards. On Tuesdays after work, we used to go to Delaware Park for a run / walk. After that, we’d head over to Hertel for a bite to eat. One night someone suggested Romeo & Juliet’s, so we went.

Well, we’ve gone back again and again and again. It’s their food, yes. But it’s the friendly, casual atmosphere too. They have a sit down, full service dining room, but they also have a casual dining room, where you order at the counter and they bring it to you when it’s ready. That’s where we’ve eaten most of the time. Mainly because after a run and/or brisk walk, nobody in the real dining room wants to sit next to us! Haha! Seriously though, we’ve eaten in both rooms, and both are equally comfortable in my mind. 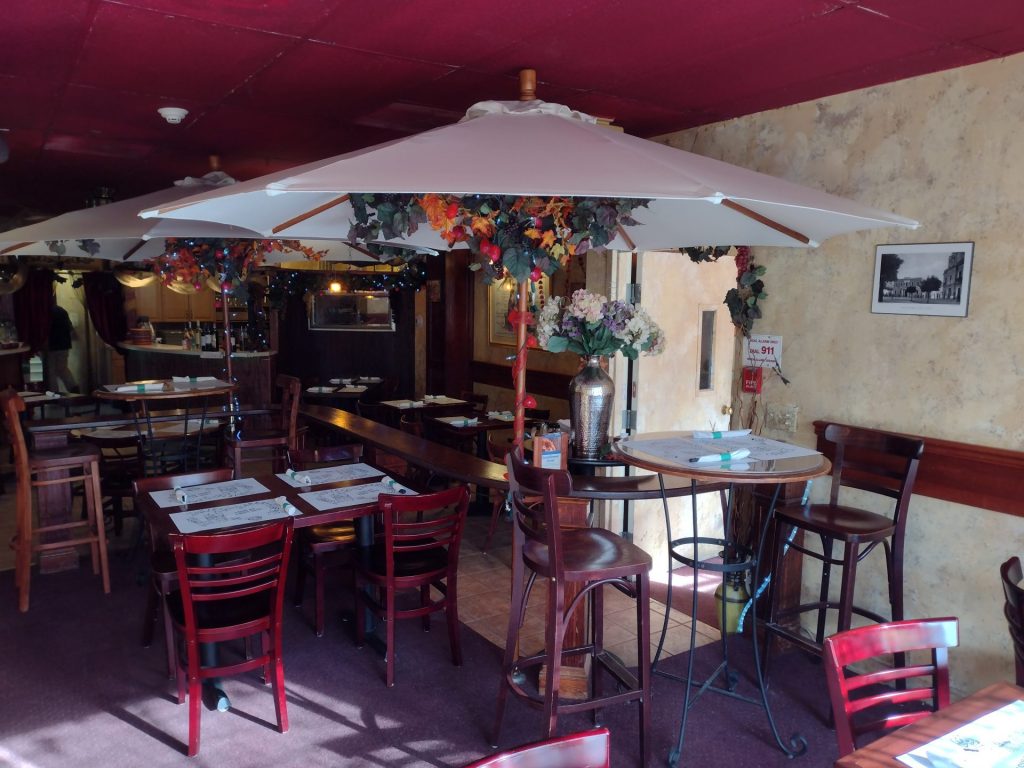 Something I Should Tell You

I guess I should have told you this when I wrote our first post about Buffalo food. I feel like I’ve been hiding something from you, so it’s time for me to fess up.

My diet is 90% plant based. I know, I know. I live in Buffalo, and I don’t eat chicken wings? Or beef on weck? Or pepperoni (cups) pizza? And, I’m writing about Buffalo food? Before you get excited, remember I said 90%. Basically, I eat healthy at home. Really healthy. And I do it for my health. Not everyone is blessed with excellent health. I find that this way of eating helps me to stay med free, soooo, I stick with it. 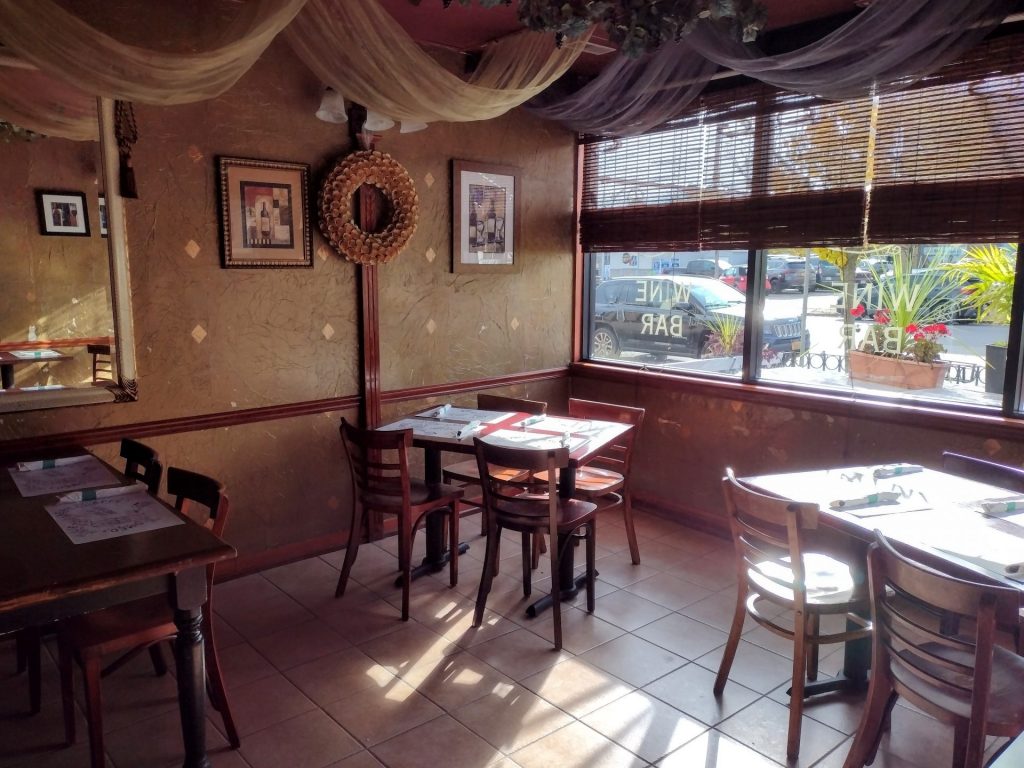 Look, I am from Buffalo. So I do eat meat and (blue) cheese occasionally, and sometimes it’s chicken wings, or pizza. I will, however, confess to never really being a beef on weck girl. I could walk away from that seven days a week. Sorry, Buffalo, you know I love you.

I’m ony telling you this so that in these food posts, you’ll understand some of my choices at the restaurants I’ll be writing about. And fear not meat lovers, you are the reason Tim will be along with me on every one of these forays into Buffalo food. He loves a good roast beef sandwich, wings and pizza. He also loves sausages, (sopressata, summer, Polish, Italian, salami, hot dogs) bacon, subs, clubs, meatloaf, steaks, seafood and more…

The Story of Romeo & Juliet’s

Here’s the story of Romeo & Juliet’s as I understand it. Romeo is Vito Semeraro, a baker, from Brendisi, Italy. He moved to Milan to learn the bakery business. And learn it, he did. Juliet is Susan (Incardona) Semeraro, who worked in marketing and communications, from Kenmore. The two met while Vito was visiting family here in Buffalo.

They fell in love, and married.

They went to Italy for a three week honeymoon and together they travelled all over eating at cafes and bakeries looking for ideas for their own place. Then, they came home and made it happen. 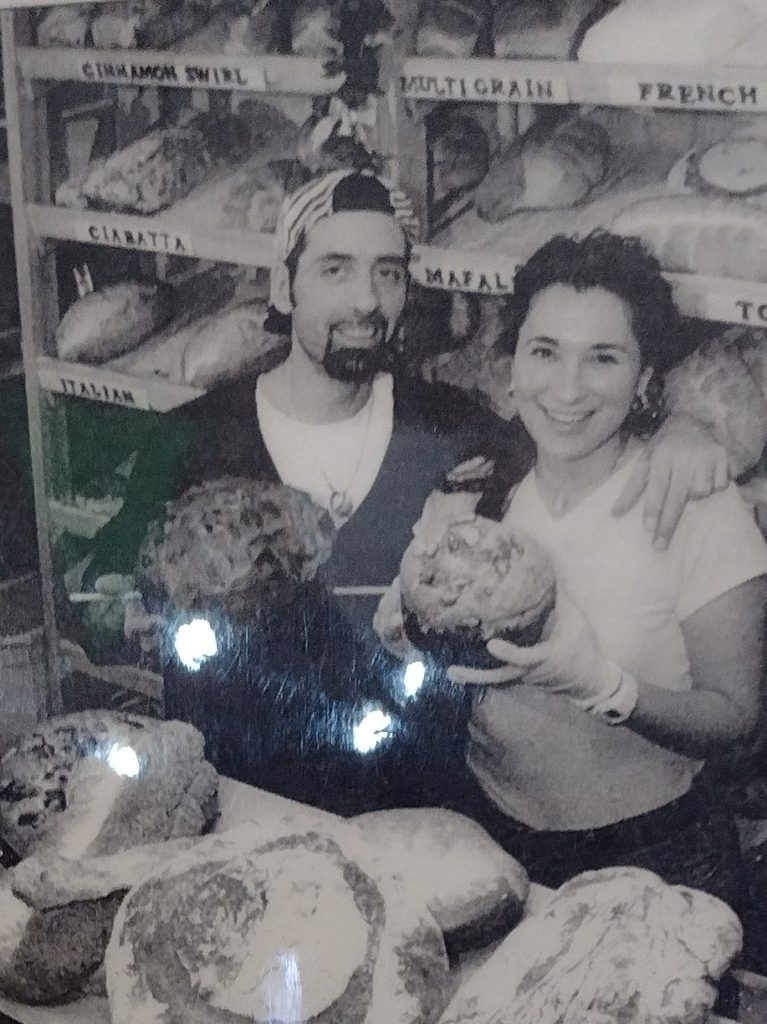 Vito wouldn’t let me take his photo, he suggested I take a picture of this photo, originally taken by Bob Bukaty of Business First. Then he said, “Look at my beautiful wife.” Susan is beautiful, but I can’t take my eyes off that panettone.

In 1998, they opened Romeo & Juliet’s in its first location on Hertel, and eventually moved to a larger space, where they are now at 1292 Hertel. Their vision of all homemade foods, from the bread, to the pizza dough, to the marinated veggies on their pizzas and in their sandwiches, to their salad dressings, to the fresh (and delicious!) baked goods, proved to be a recipe for success.

So much so, that they opened their second location on Sheridan Drive near Evans, and another one on Sheridan Drive in the Town of Tonawanda, with a couple of partners, Josh Guzzetta, and Mauricio Conti, who started as a waiter, and now manages both Sheridan Drive locations. A brief stint in Hamburg didn’t work out so well, it was just too far away.

Let’s Get Into The Food

The food here is outstanding, or I wouldn’t be writing this. Their pizza has won best pizza in Buffalo, I think more than once. For that matter, their salads could win awards. Always fresh, always delicious, and always perfectly dressed. And their panini sandwiches and specials? You get the idea. It’s all good.

All the baking still happens at the Hertel Ave location, and is shipped daily to the Williamsville and Tonawanda locations. I kind of like that. Because it means that no matter where you go, you’re sure to get the same breads and sweets at all three places, including the pizza dough. This is also a big reason the Hamburg location didn’t work out. It’s just too far to deliver to daily. 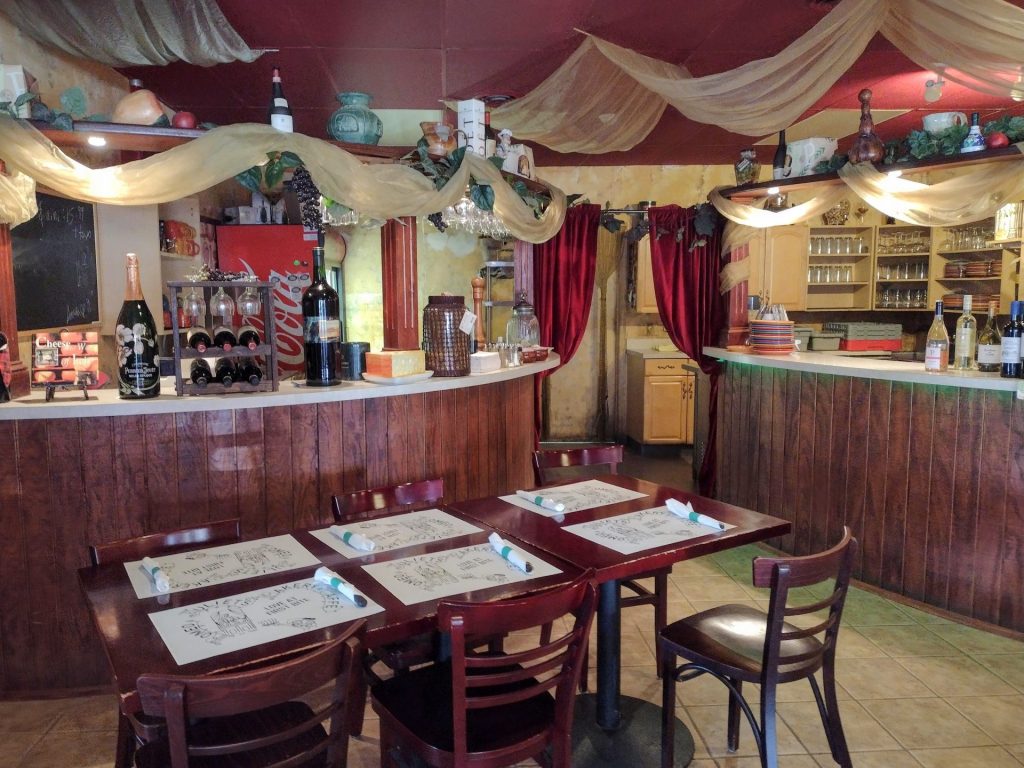 Let’s talk about the breads and doughs. Vito tells me he proofs the dough for a minimum of three days. He says it’s easier to digest when you do it that way. I like that Vito knows this. He also mentions that he bakes all the bread, with the help of Paulo Tagliaferri, who also keeps the books, and runs the dining room, and anything else that needs doing. Anyway, the breads are amazing! And incidentally, Romeo & Juliet’s were the first in Buffalo to serve foccacia bread – now everyone has it.

Now, this is my opinion, but bread gets such a bad rap now-a-days. Homemade, hand crafted, artisan bread, with good quality flour is the way it was before it became bad. The stuff you buy in the grocery store in bags is definitely not good for you. Even in the grocery store bakeries – ever look at the ingredients list? But Romeo & Juliet’s breads? They are definitely good for you, body and soul. These are authentic breads. As my cousin Steve said recently, there is nothing better than fresh baked bread, warm, with butter. Or tapenade.

Let’s talk about the tapenade first. Like bread & butter at most restaurants, Romeo & Juliet’s gives you olive tapenade with crostini. Fabulous. And I’m not even a big fan of olives. But this tapenade is truly delicious. I look forward to it.

Everytime we eat here, we study the menu and have trouble deciding. That’s not to say we don’t have our favorites. I love the Mediterannea Insalate or the Insalati di Juliet. Oh my goodness, both are fantastic! 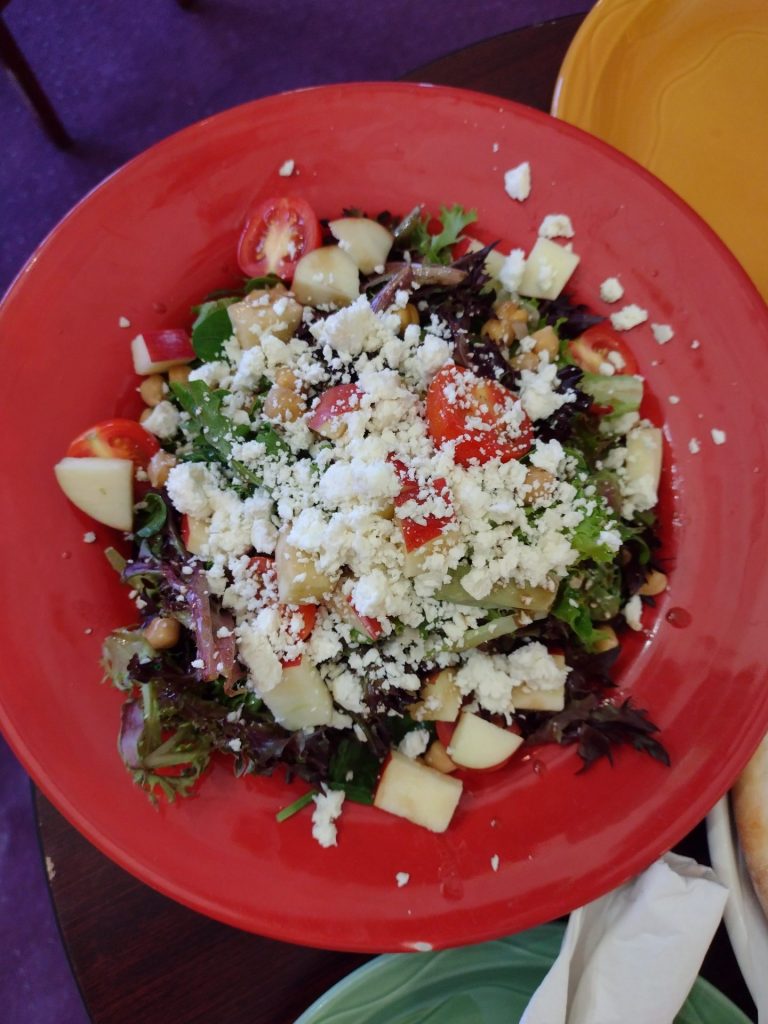 Most recently, the Mediterranea won out.

And the pizza! Wow! My favorite is Pizza Bianca with garlic, fresh tomatoes, scallions, mozzarella and romano cheeses. So good! Tim loves the Quattro Formaggi and the Pizza San Vito…I can’t argue with those choices either!

Their paninis are creative, flavorful and delicious! I can’t even choose! But if you force me, I’d have to go with the Romeo & Guilieta – spinach, eggplant, tomato and provolone. Or the Alberti – turkey with tomato and provolone. Or…never mind. I’ll say it again. You get the idea. It’s all good! For a look at their menu, see their website. 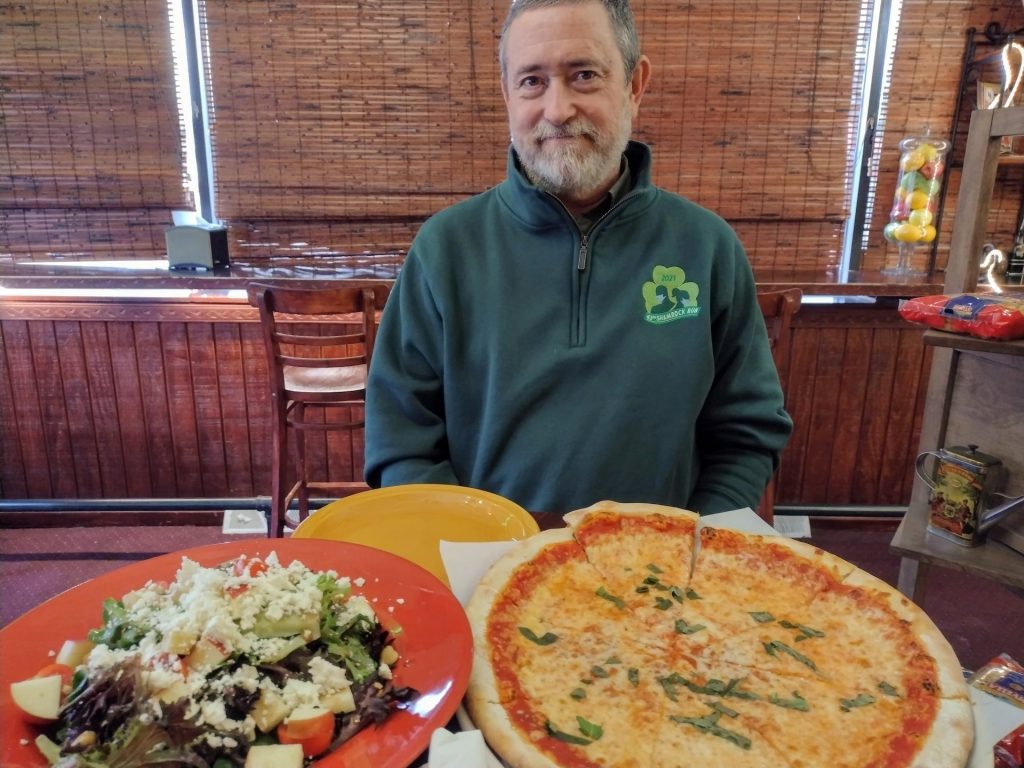 Now you know how large the salads are! And the pizza here is the Margherita. Incredible!

We’ve literally eaten here at least fifty times. We always leave happy, and almost always with some sweets to go. For me, it’s the cuccidatis. Tim usually goes for carrot cake or cannolis. 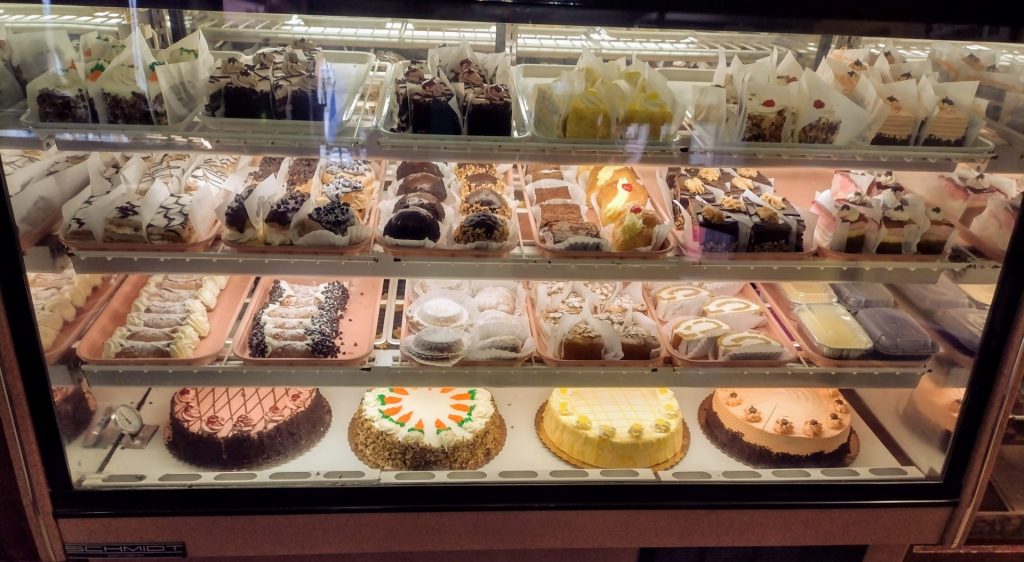 Seriously, how can you go wrong? You can’t.

Vito tells me Romeo & Juliet’s has pretty much had the same pastry chefs since the beginning. As a matter of fact, a lot of the staff has been around a long time. Servers sometimes come and go, but there is a core staff here who are like family. Vito does everything here from the baking, cooking, serving, and yes, scrubbing toilets. He says he works alongside the staff, because he considers himself staff too. That’s good for everyone. 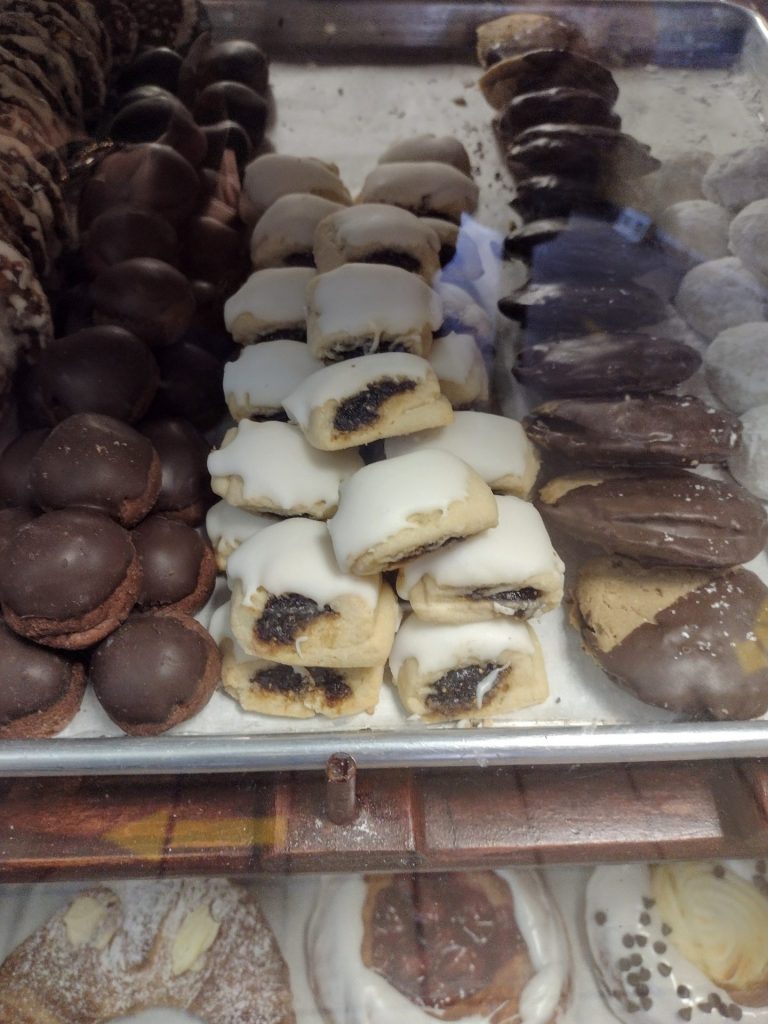 I continue to be impressed with restaurateurs here in Buffalo. They really know what work is. Vito arrives at work each day by 4:30am to begin the baking. He heads home around 2pm for a couple of hours, and is back for the dinner hour. And he stays until they close, at 8pm on Tuesday through Thursday, and 9pm on Friday and Saturday. Don’t forget that after closing, it’s another hour before the staff leaves. That is a long day. Every day. 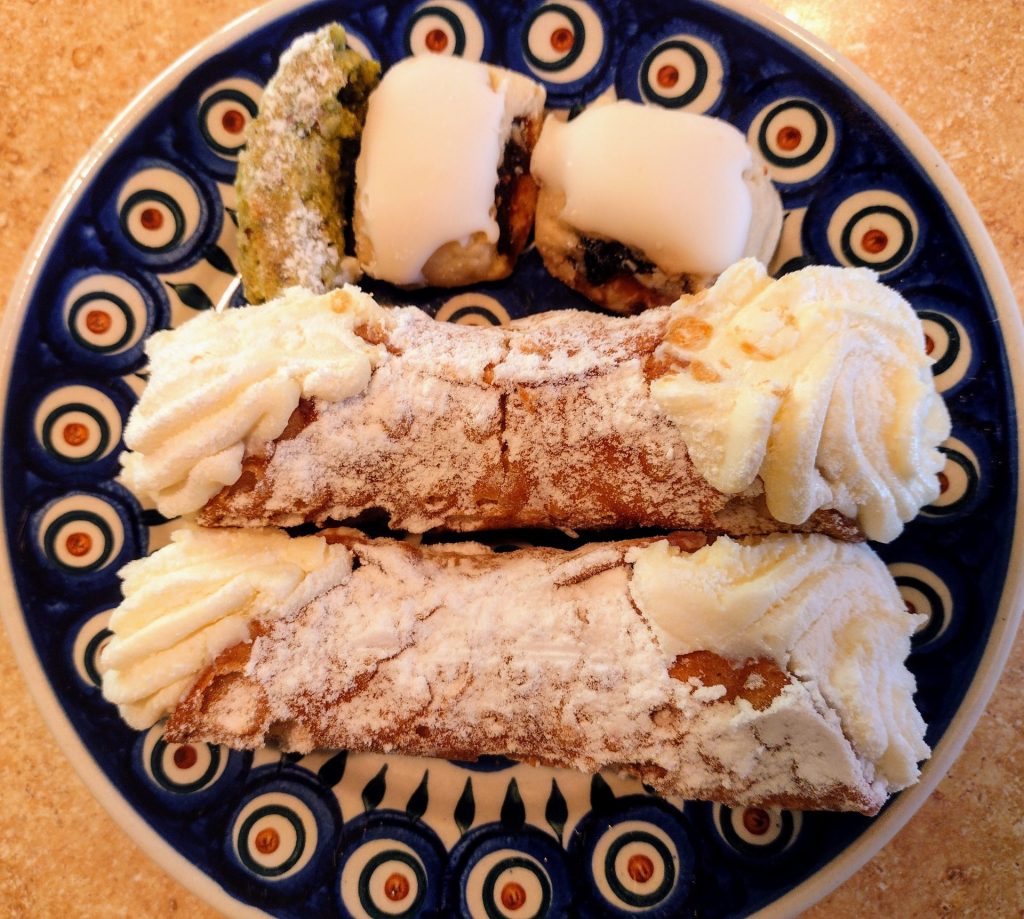 Tim’s cannolis and my cuccidatis, what’s left of them after I gave most of them to my Dad on the way home. Gotta stick to my healthy eating! I also split the pistachio cookie with Dad. It’s always a good time for a cup of tea and some of Romeo & Juliet’s cookies, or if you’re Tim, their cannolis!

And speaking of staff. It sounds like Vito has the best. During Covid, the kitchen staff stood right next to him and worked by his side through it all. The servers had to be laid off when they had to close the dining room, and all but one came back when they could reopen. This is not common. An awful lot of restaurants are struggling to find workers. I believe Vito knows what he has in his staff, and appreciates them.

Vito and Susan’s 21 year old son, Filippo, is interested in taking over the restaurant. Vito advised him, “If you don’t absolutely love it, don’t do it. Because it will become your life.” He looked at me, and said, “Baking is my life.”

It shows in your food.

I know I speak for all of Buffalo when I say that I sincerely hope Filippo absolutely loves it. That remains to be seen. 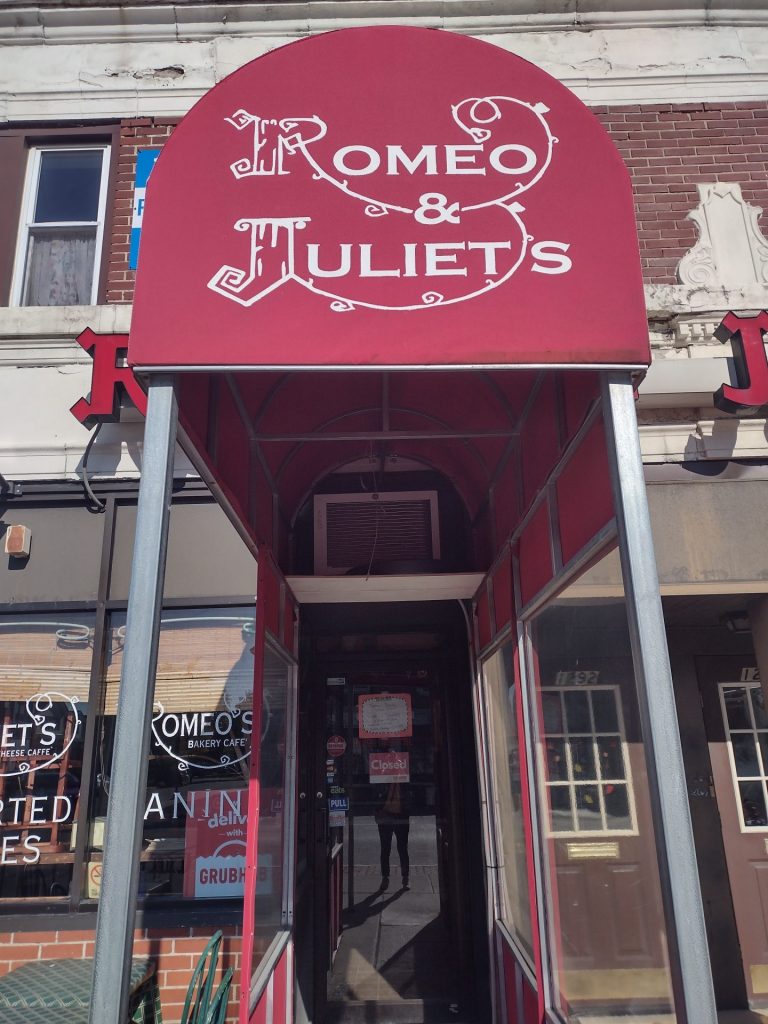 That said, Vito and Susan have plans to retire to Florida. When that’ll happen is anybody’s guess. Could be next month, next year or in 5 years. But they are going about making their plans. As a matter of fact, Susan was in Florida when I sat down to talk to Vito. Wish I could have met her. Vito tells me she is the idea person, the creative one and the brains behind all of it.

Visit the Semeraro Family, and their excellent staff, at Romeo & Juliet’s Bakery and Cafe at 1292 Hertel Ave, Buffalo.

**Use the ‘contact’ button at the top of this page to email me your suggestions on your favorite Mom & Pops, or locally owned places in and around Buffalo!