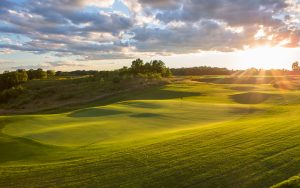 American Dunes Golf Club:  to commemorate the Birthplace of the Folds of Honor

Harbor Shores Resort: Nicklaus Masterpiece, more than a must stop!

I have been traveling into Michigan to play for years and must admit as soon as we cross the Sarnia / Port Huron or Detroit border it is generally an immediate right turn to the north.  Frankenmuth, Flint and even Saginaw have been intermediate stopping points but it is always Gaylord and Boyne that got all the attention.  Good reason for that too.

Southwest Michigan is making a case to keep going west!  Let me help build their case!

The Gull Lake View Resort in Augusta, appropriate spot for what many consider the Midwest’s premier stay and play destination.   Going on its fourth generation with the Scott Family at the helm, and as one of the largest family-owned golf resorts in the U.S. with six championship courses, simple-yet-charming lodging, and multiple dining options, Gull Lake View is a fun and rewarding experience for everyday golfers. This is the ultimate golf destination where working-class buddies can have a similar kind of experience and camaraderie as golfers have at the nationally acclaimed high-end destinations, without breaking the bank. Gull Lake View is also a favorite among families, women, and kids looking for a fun golf destination with variety.

Gull Lakes, Stoatin Brae Golf Course has been named the “National Golf Course of the Year” by the National Golf Course Owners Association (NGCOA). The announcement was made recently during the NGCOA’s Golf Business Conference 2021, held virtually alongside the annual PGA Merchandise Show.

Stoatin Brae, which means Grand Hill in Scottish Gaelic, was a departure from the normal pattern of growth at the resort. The course is only the second course of the six that was not designed and built by the talented Scott family with landscape architecture backgrounds. The decision by the family was to collaborate with Renaissance Golf Design and its A-Team of senior associates, Brian Schneider, Eric Iverson, Don Placek and Brian Slawnik. The highly acclaimed course, a magnificent design situated on a picturesque bluff overlooking the Kalamazoo River Valley, marries a minimalist classic links-style with architectural elements from golf’s golden design era of the 1920s and 1930s to create a stunning and memorable golf experience.

It all began in 1963, Darl Scott, an entrepreneur at heart and golf course superintendent at nearby Gull Lake Country Club, decided to build and open his own public golf course. As the story goes, Darl and his wife Letha worked hard, first building the West and then along with his son Charlie, built the East course. Charlie also worked with his dad designing and building the Stonehedge North and South courses. In 1988, the family acquired its fifth course, Bedford Valley near Battle Creek, a popular William Mitchell parkland design that has hosted multiple Michigan Opens.

American Dunes Golf Club – Birthplace of the Folds of Honor 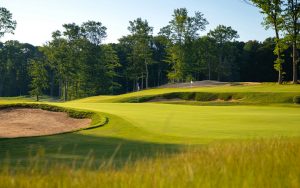 I had the chance to visit back in the fall of 2019 when Dozer Doug was still doing his thing, moving earth in the meticulous fashion that Mr. Nicklaus would approve of.  It is my honor to consider American Dunes GM Doug Bell as a friend, in the fall of 2019, as the course was taking shape, he gave me the royal tour.  I was travelling from Boyne to Harbor Shores passing ever so close, there was no way I could not stop in!  An experience and amazing sight to see.

American Dunes is the vision of Col. Dan Rooney, a PGA Member and F-16 fighter pilot who has served three tours of duty in Iraq and the founder of the Folds of Honor.  The course, formerly the Grand Haven Golf Club, has been completely transformed and is scheduled to open this coming May.

The Grand Haven course had been in the Rooney family for decades, but it was time for a bit of an overhaul.  The new and redesigned American Dunes would serve as a safe haven and tribute to the military and commemorate the birthplace of the Folds of Honor.  To make a big splash Rooney called upon long time friend and golf hero (as he is to many of us) Jack Nicklaus for the redesign.  Intrigued and just being Mr. Nicklaus, all design fees were waived in honor of the project.

Nothing but rave reviews from the soft opening last fall and I obviously can’t wait to get a chance to get over there.

“The real fun in the project is knowing that what you’re doing is going to benefit a lot of families, a lot of kids,” said Nicklaus.  “Barbara and I have been all about kids for a long time, when you talk about educating kids, particularly at Fallen Warriors.  That’s been pretty special to all of us.”

Folds of Honor was inspired on a flight home from Chicago to Grand Rapids.  On board was a fallen service member.  Rooney happened to witness the somber meeting of his family members including a young son, and the flag covered casket.  Since its founding in 2007, it has helped numerous families including Doug Bell’s step-children who are both Folds of Honor recipients.

Looking forward to the Grand Opening in May, check out: www.americandunesgolfclub.com

For information on the Folds of Honor: www.foldsofhonor.org

While you are in Southwest corner of Michigan, if you don’t make a plan to include at stop at Harbor Shores you will kick yourself. 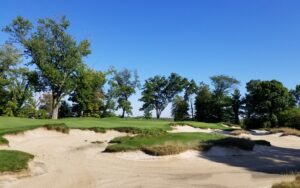 Harbor Shores Golf Resort is the first beach, golf, and residential waterfront community in Michigan’s Great Southwest and the home to the only Jack Nicklaus Signature Course touching the shores of Lake Michigan. Since being named to Golf Magazine’s Best New Courses You Can Play list in 2010 (#3), it has hosted the KitchenAid Senior PGA Championship in 2012, 2014, 2016, and 2018. And now Harbor Shores will again play host in 2022, and 2024.

I played here in 2019, did not play all that well but still loved the course.  I did have a number of good shots but most of them were with my camera as you will see in my little video.

A Nicklaus masterpiece to say the least.  Four distinctly different terrain types take you around the community and guide you along the picturesque river with the cutest of names – Paw Paw River.

Holes one to six are considered the inland holes, where you get a taste of the bunkering on the second hole and an introduction to the Paw Paw River on the third.  You will realize by the end of this stretch that fairways are large and easy to hit.  Getting onto the green and avoiding bunkers and water is another thing.

Seven through nine are Dunes holes cresting at the seventh green with panoramic views of Lake Michigan.  I’m pretty sure that everyone has a love hate relationship with the par 4- 7th hole. Stunning from the island tee box over wetlands, play your tee shot to the center or left of the fairway to avoid bunkers and a lake on the right. Your second shot is played to an elevated green 25 ft. to the top of the dune. The green is surrounded by dune grass. Go long . . . and you’re on the beach. Stay short . . . and your approach will roll to the bottom of the hill.

Holes 10-13 present a more tree lined scenario mixing in some natural ponding and ravines and if that is not enough, Mr. Nicklaus threw in more bunkers – just to keep you on your toes.

There is a movie called “A River Runs Through It.”  Holes 14 to 18, the Paw Paw River runs through them.  You will love the risk reward 16th and its kidney shaped green.  The 18th is a great finishing hole, the river runs along the right side and wetlands align to the left. A good drive leaves you a short iron in.  Good luck!

If Southwest Michigan was not on your mind in the past it should be now.