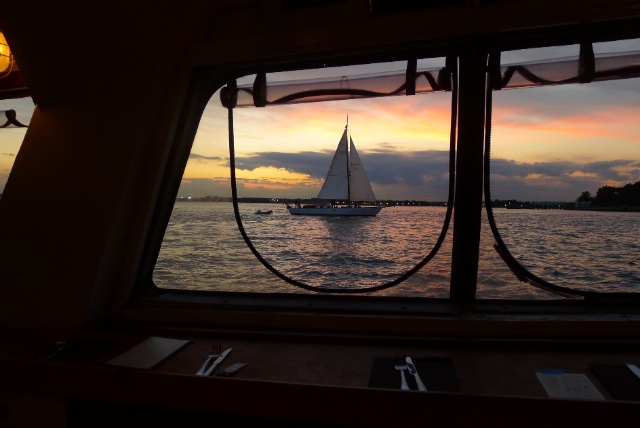 Floating on the watery world that surrounds our city is one of the more sublime ways to idle away a temperate evening. With warm breezes on the horizon, it's time to check in with our favorite ways to float the high seas rivers, cocktail in hand.

THE WATER TABLE If the above view is something you wouldn't mind gazing at while dining on New England fare like Lobster Mac & Cheese, Italian Sausage & Peppers and a New England Seafood Boil, hop aboard this restored U.S. Navy Yard Patrol boat turned maritime bar and restaurant. The Water Table has been cruising the East River since 2013, offering Friday and Saturday evening cruises with a three-course meal ($80) and a special Sunday supper with two courses ($55).

Both cruises afford sunset views, a delicious meal prepared by Captain Kelli Farwell, and cocktails ($13), beers, wines and a special menu of rums. While the well-appointed interior serves as a charming gathering spot, don't miss a trip to the upper deck to view sights like the Statue of Liberty, the remains of the Domino Sugar Factory and the Manhattan and Brooklyn Bridges. 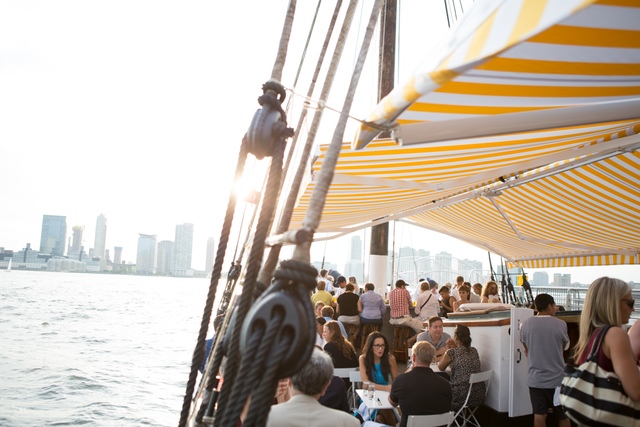 GRAND BANKS While it's situated on the historical F/V Sherman Zwicker schooner, this experience is more about floating than boating, as the ship stays put in its Tribeca berth. Still, there's a breeze through your hair as you slurp down oysters and suck down nautically-themed cocktails like Painkillers and Blue Hawaiis. This season, it'll be even easier to score said cocktails—along with summery wines, champagnes and craft beers—as the schooner debuts a second bar towards the bow to accommodate New Yorkers' insatiable lust for floating alcohol. Pier 25 in Hudson River Park // Opening mid-April

MANHATTAN BY SAIL This company offers over a dozen different types of cruises aboard their two schooners: the tall ship Clipper City and the Shearwater. The Clipper City, which boasts the distinction of being NYC's largest tall ship, offers experiences like the Lobster & Beer Lovers Sail, which features rolls from Luke's Lobster, unlimited beers and two hours rocking through the harbor. The smaller Shearwater offers things like brunch, happy hour and wine tasting cruises.

Clipper City launches from Slip 2 at the south end of Battery Park and sails begin April 22nd; Shearwater sails from North Cove Yacht Harbor in front of the glass atrium of the Winter Garden at Brookfield Place (World Financial Center) in Lower Manhattan and sails begin May 5th

NORTH RIVER LOBSTER COMPANY Lobster's luxury status typically means a high price point but at least on this boat, motoring around the Hudson River is completely gratis. The triple-decker boat departs from Pier 81, cruising around for 45 minutes before returning to the dock. Of course, there's no such things as a free lunch, and entree options are a bit pricier than their counterparts on land. But if you're not shy about shelling over $22.50 for a lobster roll or $8 for a Bud Light, you can sit on the boat all afternoon as it makes its daily rounds.

This year, the same company is also opening Fish Bar, another three-story, 10,000-square-foot vessel that'll venture out onto the river with free jaunts throughout the day. 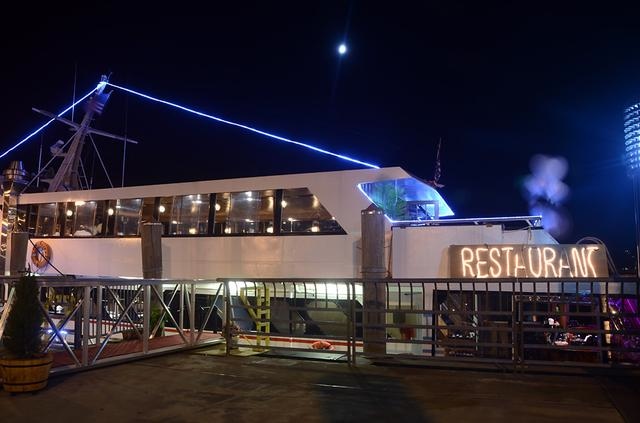 AMBERJACK V There's an ever-so-slight touch of kitsch on this Sheepshead Bay-docked vessel, but that's probably what makes the whole operation so charming. On board you'll find a menu of Russian and Turkish cuisines, like simple grilled fish and steak salad. They offer a full bar and have been known to do a weekend brunch, too, if you're in the area. While the Amberjack V typically stays docked, it can set sail for events—they note that they are United States Coast Guard certified to sail 20 miles offshore and carry up to 149 passengers.

BROOKLYN BARGE BAR It was a will-they-or-won't-they dance last season, but this Greenpoint floating barstaurant did in fact open in September and they'll be doing so again this year. Now under new ownership, it still remains to be seen how the menu will differ from last year's simple fare of burgers, grilled chicken and the like, but new proprietor Thomas Morgan assures us the barge will be fully operational for alfresco drinks and stunning waterfront views.

97 West Street in Greenpoint, Brooklyn // Opening date not announced yet. 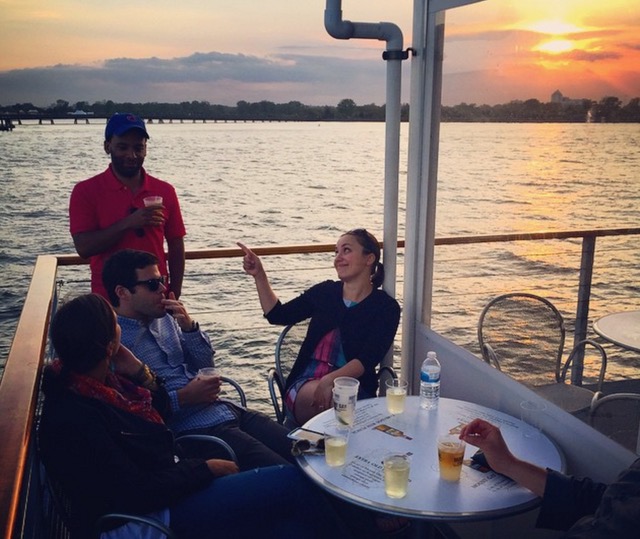 The Honorable William Wall: There's no other bar in NYC like the William Wall, a watery watering hole named after the 19th century rope magnate, mayor of Williamsburg, and founder of Williamsburgh Savings Bank. 20 bucks gets you a round trip boat ride out to a quirky two-level barge anchored out in New York harbor, just a bit north of Ellis Island. The ground floor serves as the indoor clubhouse for the Manhattan Yacht Club (the interior looks like a clubhouse, with the typical upholstered furniture and old photos) but you'll be chilling at the indoor-outdoor bar on the second level, where refreshing Hudson Bay breezes roll through to tousle your hair and shoo away all thoughts of how much that bar tab will come to. (Don't sweat it, drinks are the same as you'd pay at any yupster bar in downtown Manhattan. $7-$8 wine by the glass, etc.)

It's all worth it: you're almost out at sea some place, and the only downside is that you're definitely not allowed to rip off your clothes and jump into the river. (We asked.) On the plus side, there is shade or sunshine, depending on where you choose to repose, and you can bring along plenty of food for a picnic.

The Willy Wall is open seasonally on Tuesday through Friday evenings between 5:15 and 9:40, and on weekends, when the bar operates in two sessions, from 1-4 and 5-9. The sunsets are quite lovely, so consider the later session, and definitely purchase launch tickets in advance. It leaves from the WFC Ferry Terminal, where Vesey Street would meet the Hudson River. Launches mid-May. (John Del Signore)

CLASSIC HARBOR LINE This company offers quite a few options when it comes to vessels, whether you prefer the luxury yacht model or the stiff ocean breezes aboard a schooler. Either way, they offer dozens of events and cruises, from 4th of July fireworks sails to food-related jaunts and tours of notable architecture as viewed from the water. 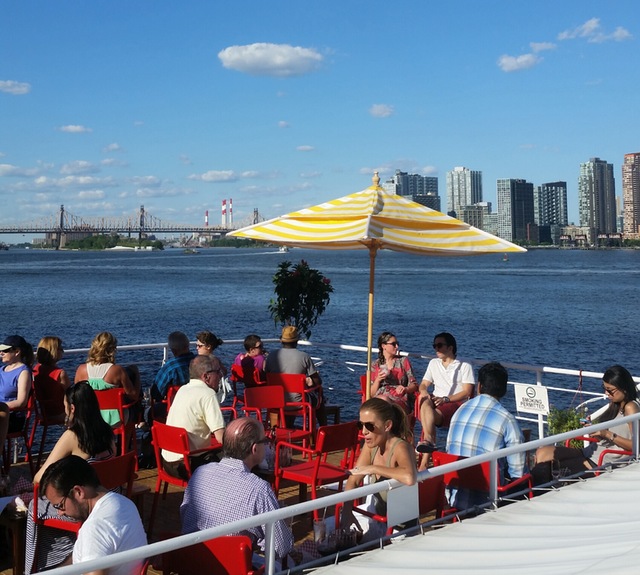 THE CROW'S NEST The yacht that houses this floating bar hasn't seen the high seas in a long time, but it's resting comfortable on the East River as one of the few options for viewing Queens from a boat. The food can be hit or miss, and costly—their shrimp cocktail costs $17 and comes with just three shrimps. Granted, they're big and fresh, but ouch. (You're better off with the oysters.) The drinks and the location, however, are worth paying for, particularly the frozen margaritas and the refreshing Pomegranate Lime Rickey. You can also get a bucket of six beers for $35, which isn't that bad considering you're paying for the location, which is conveniently located right by the East River Ferry stop at 35th Street.

THE FRYING PAN We couldn't forget this stalwart NYC floating institution, favored by bros and that one friend you haven't seen since college who can't wait to hang out "where all the COOL New Yorkers do!!!" Truth be told, we've had a few decent events spent out on Pier 66 and its adjoining vessel the Lightship Frying Pan. Toss back a bucket of Coronas (six for $34) and suddenly the cargo shorts and Tory Burch decals melt away and even New Jersey, way over there across the Hudson, takes on a romantic air in the setting sunlight.

While it's typically counter service, this June they'll begin a "full-service dining experience on the deck of Lightship Frying Pan, complete with hosts, a maitre ‘d, servers, bussers and food runners."

STATEN ISLAND FERRY Scoff all you want, but this fleet of brazen orange boats is one of NYC's best ways to experience life on the water without spending a single dime if you don't want to. Besides being free, the ferry affords up-close views of the Statue of Liberty, a dramatic retreat and approach of downtown Manhattan—depending on which way you're traveling—and a peek at parts of the developing Governors Island. On top of this, the ferry is BOYB—or buy a cheap oil can of Fosters in the terminal or on-board—and sells a crappy yet satisfying version of squeez-cheez nachos, if you're into that kind of thing.