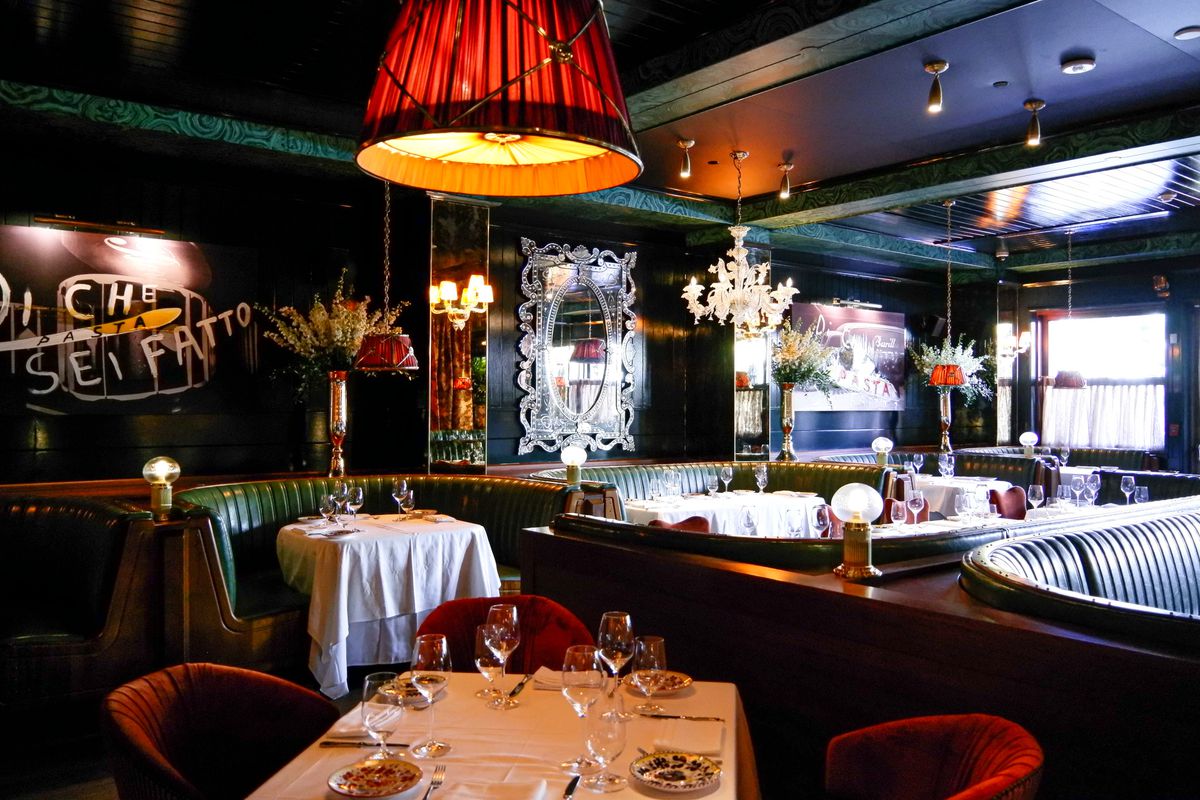 For restaurants, 2021 has brought some degree of hope. As workers — and diners — get vaccinated, restaurant dining rooms are beginning to more closely resemble pre-pandemic scenes. But the costs of 2020 linger. Many restaurants are struggling to hire staff. Months worth of deferred rent payments now due could push more to close for good; scores of restaurants already have. And then there’s Major Food Group, the powerhouse restaurant group that’s on an expansion tear.

Over the past four months, while restaurants all over the country have slowly attempted to regain their footing, MFG has opened four restaurants and announced plans for several more. The New York City-based group, founded by Mario Carbone, Rich Torrisi, and Jeff Zalaznick, kicked off the year by opening a new location of Carbone, its Italian-American celebrity magnet, in Miami’s South Beach at the end of January. Just a few months later, in April, it opened ZZ’s Sushi Bar, a hybrid of New York’s ZZ’s Clam Bar and a sushi club with a members-only component in Miami Design District. That same month, the group debuted an outpost of its casual Italian-American restaurant Parm at Woodbury Commons, an outlet mall in Central Valley, New York. And in March, it opened a Sadelle’s inside Kith’s new Paris store.

Timed to the start of basketball season this fall, MFG will open a 7,700-square-foot lounge at Brooklyn’s Barclays Center arena; also this fall, a new version of Torrisi Italian Specialties will open a block away from the original Italian restaurant and deli that launched Rich Torrisi and Mario Carbone into the restaurant-world spotlight in 2009. Later in 2021, Carbone and Sadelle’s will open in Dallas, and by mid-June, Contessa, an all-day restaurant in Boston’s new hotel the Newbury, will be up and running.

Miami’s role as MFG’s home away from home will be secure with even more restaurants later this year: an Italian trattoria in the city’s Design District and an American steakhouse in the Brickell neighborhood are planned. MFG has also just nailed down locations for two Sadelle’s restaurants, one in Miami’s Coconut Grove and the other on Miami Beach. The Coconut Grove location will open this year, while the other, a bigger build-out that includes a market, will take longer. Finally (for now), MFG is also working on an “Israeli concept,” most likely for the South of Fifth neighborhood later this year.

“We’re quick on our feet. We pivot fast. We know when we want something and we go after it. We felt that way about Miami very quickly,” Zalaznick says of the rapid expansion. “I had the good fortune of finding myself here [in Miami] right at the beginning of the pandemic. As soon as I got here I realized the potential, and we started moving.” (Zalaznick himself also made the move down to Miami.)

The restaurant industry is booming in South Florida. Eater Miami editor Olee Fowler says Miami’s lower rents and the state’s looser COVID-19 restrictions (Florida restaurants have been able to open for indoor dining at 100 percent capacity since September) were a draw for New York City restaurateurs. “There’s always been an overlap between New York and Miami. We jokingly call Miami the sixth borough,” Fowler says. “Since the end of September, Florida has basically been open for business. Florida has a beautiful wintertime where everyone can be outdoors hanging out, and [New York restaurateurs] saw it as an opportunity.”

The New York-to-Miami migration is a phenomenon fueled by “a one-percenter exodus” from NYC, with Curbed noting that it’s not exclusive to restaurants: New York City art galleries have also opened up branches in Miami, following wealthy financial institutions and individual wealthy collectors. And over the past year, Miami Design District, home to ZZ’s Sushi Bar and that upcoming trattoria, has seen profits grow at surprising rates over the past several months, despite the dismal state of retail elsewhere. Compared to the year prior, sales at Design District businesses were up. “Since July, sales were up 20 to 30 percent. [They were] up 40 percent in January and February. March, we were 93 percent up,” says Craig Robins, CEO and president of DACRA, the real estate development company behind Miami Design District. “I don’t know if there’s another retail destination in the country that’s had the kind of growth we had.”

Robins says the new MFG restaurants are a “perfect addition” to the neighborhood. “The Design District restaurants, they’re fun and casual. You still feel like you can go in jeans and a T-shirt, even if the food is the highest level,” he says. MFG’s restaurants operate on this higher end of the spectrum, with dining rooms that are festive without feeling stuffy. “Everybody knows there’s so much demand,” says Robins. “You feel privileged and acknowledged just to be at a table, and then the level of service and the quality of food is outstanding.”

When Carbone Miami opened, Fowler says, the buzz was immediate. “Miami’s all about a scene and being the hot cool spot to be,” she says. “Carbone has done that exceptionally well.” Brand familiarity helped with the buzz, she says, given that New York-Miami exchange, as did Carbone’s menu of unchallenging Italian-American classics done well. The difficulty of snagging a reservation only added to Carbone’s appeal. “Miami loves that type of stuff. It’s all about the VIP scene,” Fowler says. “That’s how we are, for better or for worse.”

Even in New York, the U.S. city hardest hit by the coronavirus pandemic in its early months, there was demand for MFG restaurants, despite the group’s temporary inability to deliver on the ambiance. When Carbone reopened for takeout only in March 2020 after a brief closure, demand for $32 spicy rigatoni and $69 veal Parmesan drew crowds so large the police were called in to disband them.

MFG, with its newest restaurants, seems to be leaning into the air of exclusivity it’s long cultivated with a system that makes reservations scarce. At many locations, reservations can only be requested exactly one month to the day, and just for one day; now it’s adding actual private clubs to its portfolio. According to the New York Times, MFG’s Barclays Center lounge, Crown Club — which will serve popular dishes from existing MFG restaurants along with items from chefs at other NYC restaurants — will be open only to those with courtside Brooklyn Nets tickets, limiting its 250 seats to those who could already shell out at least $475 for courtside access.

Rapid expansion, according to Zalaznick, is nothing new for the group, which once opened seven New York restaurants in a single year. The newest additions are part of an already robust portfolio that includes 10 restaurant concepts in New York City (not including multiple locations of Parm, a casual ode to Italian-American comfort food), two in Las Vegas, two in Tel Aviv, and one in Hong Kong. All of them are expected to reopen. “We were really smart about the way we did our closures and the way we did delivery, and when we opened and how we opened,” Zalaznick says of how the group avoided pandemic-related slowdowns. “So far we’ve made a lot of big changes and big moves, and they’ve worked.”

These moves include MFG entering new kinds of venues. Simon Property Group, the real estate investment trust probably best known for its malls, is a minority stakeholder in MFG and the driving force behind the fast-casual Parm popping up next to the likes of Auntie Anne’s and Chipotle at Woodbury Commons, and soon, in Burlington Mall in Burlington, Massachusetts. As far as outlet malls go, Woodbury Commons is at the highest end, home to outlets for brands like Dior, Prada, and Givenchy; if Major Food Group were to open at any outlet mall, it would be this one. Earlier in the year, the group made another brand-appropriate expansion, opening a Sadelle’s, the MFG contribution to all-day dining, at Kith in Paris, the streetwear shop’s 16,000-square-foot European flagship. Here, Parisians looking for the latest sneaker drop or designer collaboration can take a break for a bagel and caviar.

If the group’s ongoing global expansion seems out of step with the overall state of the restaurant industry, it’s not necessarily incompatible with the state of the world at this point in the COVID-19 pandemic. Those disproportionately bearing the economic costs of the pandemic were those with less to begin with. The world’s wealthy, who were able to wait out the worst of the pandemic lockdowns working from their vacation homes, haven’t lost the means or desire to expand their car collections, bid on diamonds, or charter jets. And it’s this clientele that MFG seems to be banking on as it opens restaurants that meet many of these customers where they are, whether it’s the restriction-free playground of Miami, a private sports lounge, or Paris’s newest shopping destination selling $75 cropped tees.

From an operations standpoint, Zalaznick says, the pandemic may have actually benefited the group. “It made us smarter and better and gave us the opportunity to reflect on our business and how we can be better as a company and operate more efficiently,” he says. “We try to turn every negative into a positive, and this is the ultimate example of that.”

The freshest news from the food world every day