That Hainan Airlines is about to start direct service between Boston and Beijing somehow makes authentic Chinese food seem less far away. But for those who want the real deal closer to home, Boston has you covered—both in quality and range of cuisine. The options are sprawling, too. While Chinatown is a stronghold for excellent Cantonese and—more recently—Taiwanese fare, stepping farther afield to towns like Malden, Woburn, and North Cambridge will bring you to versions of mapo tofu, biang biang noodles, and handmade dumplings that can go head-to-head with their counterparts in the mother country.

Behold, our guide to the best Chinese food Boston has to offer—a roster that is by no means comprehensive, but gives you a good start. It might just save you an airline ticket, too. 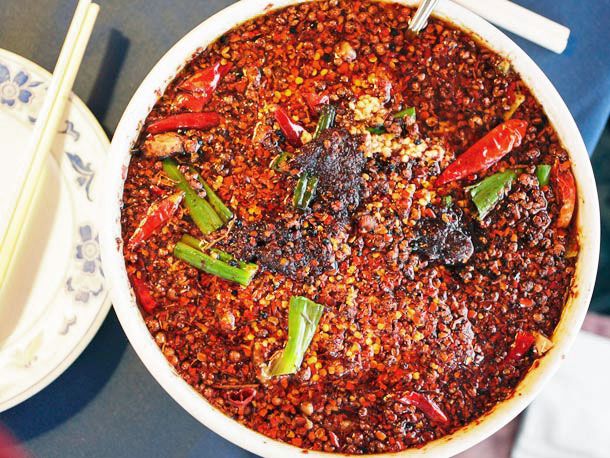 You don't go to Fuloon for the atmosphere, which is classic suburban Chinese restaurant (think: elevator music, slippery "leather" booths, and a fish tank). Nor do you go because it's convenient, as Malden is a good 20 minute drive north of the city. You go for the chili burn, the citrusy numbing sensation of ma la, and the vinegar punch, all of which make frequent appearances on the restaurant's largely Sichuan menu.

Chef Zhang Wenxue's ma po tofu is some of the best you'll taste anywhere, including in its hometown of Chengu: rich and intense, custard-smooth, and mouth-numbing with the intensity of its Sichuan peppercorns. But that's just one of many must-order dishes. Our best advice: get a group together and share as many of the following as can fit on the lazy Susan: Bang Bang Chicken, Wonton's with Special Hot Sauce, Jingdu Pork Pancake, Starch Noodles with Pork, Mandarin Cabbage with Spicy and Sour (the sleeper hit of the menu), Szechuan-Style Steamed (read: swimming in chili oil) Beef, Kan Shue String Beans, Hot Diced Chicken Szechuan Style, Wok-Baked Beef, and Bean Curd Knots with Pork Belly. 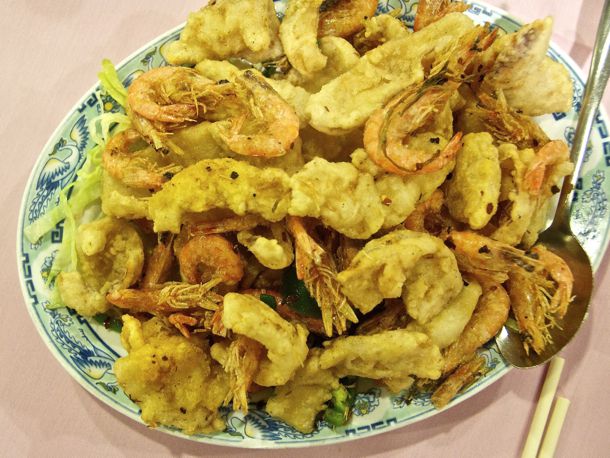 Thanks to its late hours (open 'til 3 a.m.), this bustling subterranean Chinatown staple doubles a hangout for off-work chefs. (It's also a good idea to go late at night, because eating during primetime often means crowding around the entryway while you wait an hour or more for a table.) But the real draw is swimming in the restaurant's fish tanks: live fish and shellfish that are no sooner plucked from the water than they appear on your plate.

Live, head-on, in-the-shell salt-and-pepper shrimp are a must, and you know they're fresh because their availability is day-to-day (call the restaurant after 1 p.m. to check if they'll have them that night). The fry job is so expertly done that the two-bite crustaceans boast a light, delicate crunch that you might not expect from shell-on seafood. Other good choices include Cantonese classics like lobster with ginger-scallion sauce and clams with black bean sauce. 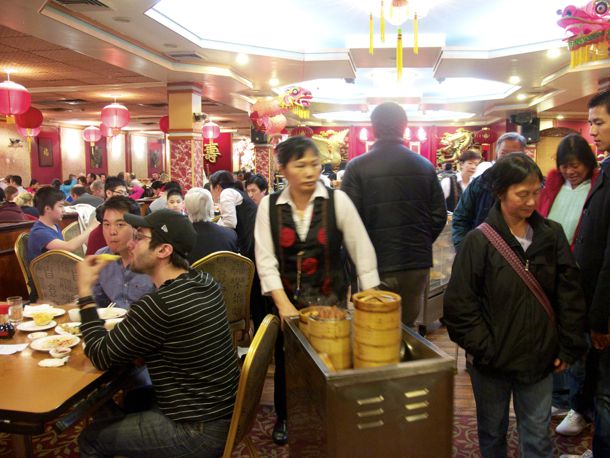 This is your quintessential pushcart dim sum experience. Ascending the steep staircase brings you to one of Chinatown's most impressive dining rooms (vast, dressed in red and gold), buzzing with a merry-go-round of shumai, fluffy barbecued pork buns, translucent shrimp and chive dumplings with tidy pleats, tender-chewy stuffed rice noodle rolls, egg custard tarts, congee, and a barrel of silken tofu drowned in ginger syrup. (There's also a buffet table with favorites like clams and black bean sauce and steamed Chinese broccoli.) The prices are low: you can expect to order half a dozen items—enough for two or three people—and keep the check around $30.

Like most good dim sum restaurants, the line at weekend brunch time is as long as you'd find at a good diner or deli. Be prepared to stand in line for at least half an hour—and consider picking up a custard bun at nearby Hing Shing Pastry to hold you over. 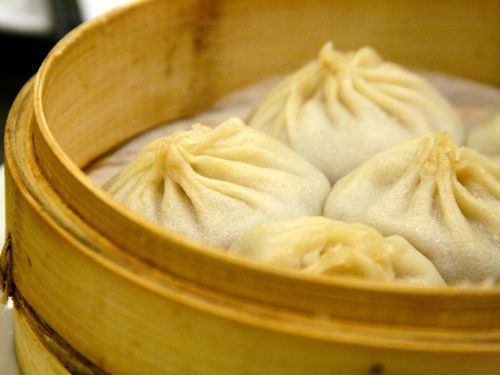 Dumpling Café or Gourmet Dumpling House? The rivalry between these always-packed Chinatown neighbors can be fierce, but if you ask us, Dumpling Café edges out the competition when it comes to soup dumplings. The pitch-perfect XLB (xiao long bao) feature thin skin that's just elastic enough to hold in the juicy, fatty pork meatball and its rush of hot broth. Give it a quick dip in the punchy black vinegar-ginger dipping sauce and you're set to start slurping.

The kitchen also happens to turn out the best garlicky peapod stems we've ever had—these, plus the soup dumplings and a bowl of steamed white rice, make a perfect meal—not to mention sautéed chewy sliced rice slabs with pork and pickled mustard greens, oodles of noodle soups and stir-fries, and the hidden gem: ultra-savory twice-cooked preserved pork with slabs of smoky pressed tofu.

A caution for impatient diners: The weekend dinner rush can leave you waiting in the tiny vestibule for the better part of an hour, and dining with strangers at a packed table. For a more relaxed meal, try going in the mid afternoon or late at night (dinner is served until 2 a.m.). 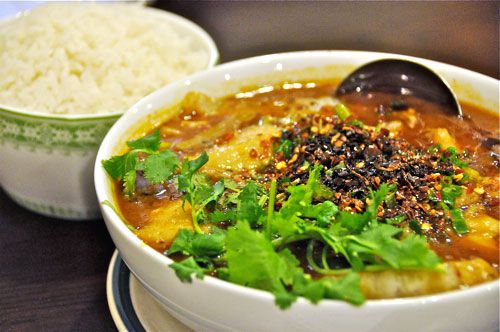 Qingdao Garden might be the most unlikely looking of Boston's best Chinese restaurants—a sparsely decorated, harshly lit dining room that doesn't have a liquor license and is almost never crowded. But, oh, the dumplings. Chef-owner Wen Ji Xiang's pork-and-leek specimens are juicy, ultra-savory, expertly wrapped in a thick, resilient-but-tender dough, and they've put this North Cambridge restaurant on the map. (There are six other flavors, too, including three really good vegetarian options, and they're all available frozen in bags of 50 for take-home. Just boil and serve.)

Beyond that, stick to the Pastry, Northern Style, and House Special sections of the menu, particularly the scallion pancakes and leek pies, hot and sour potatoes with chili peppers, fried tofu with pork and black bean sauce, and the truly awesome boiled fish in fiery sauce: a cavernous bowl of dark, rich broth chock-full of tilapia fillets, celery, cabbage, dried chiles, cilantro stems, hot broad bean paste, and Sichuan peppercorns that might be just the best cold remedy out there. 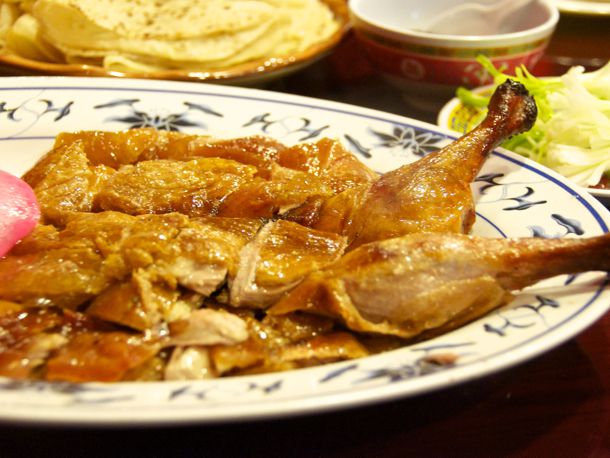 It's hard to say what's more satisfying about the Peking Duck experience at this cramped Chinatown corner spot: the gorgeously lacquered fowl, or the fact that it turns into a multi-course dinner that costs $38 and feeds four. Call 24 hours in advance to order the duck (do make a reservation—tables go fast at peak hours, and chances are the reservation will simply shorten your wait). Once seated, you'll be ceremoniously presented with the whole bird—head and all—which is then whisked away to the kitchen and returned in three courses. First up: chunks of meat with layers of silky fat and crackly bronzed skin, plus steamed pancakes, fanned scallions, and hoisin. Next: a stir-fry of pulled meat (ask to upgrade to the version made with thick, springy chow mein noodles for a few bucks more). And finally, a palate-cleansing duck-bone broth with Napa cabbage, wobbly soft tofu, and slippery glass noodles. 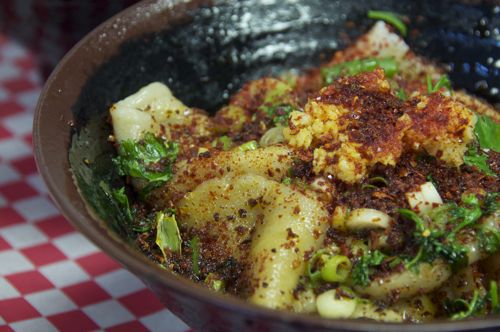 Until Gene Wu opened up shop, the closest Bostonians could get to Xi'an-style biang biang noodles was New York. Nowadays, noodle nuts flock to the tiny dive-y café on the outskirts of Chinatown, where the jagged, ropy straps of dough are slapped-and-pulled to order (take advantage of the open kitchen and watch the process). They appear in multiple dishes, the most basic of which might be the best: boiled noodles bathed in a chili oil vinaigrette and loaded up with raw garlic and fresh cilantro.

Other must-tries include the liang pi chilled noodles—a weekend-only special of wide, slippery ribbons and cubes of the spongy wheat gluten tossed with chili vinaigrette—and the cool, composed salad-like bowl of springy, ramen-esque cold noodles, julienned carrots and cucumber, bean sprouts, chili oil, and a sliced tea-steeped egg. (A note about the café's tricky hours: The original Chelmsford location just closed and is rumored to be reopening in Woburn; the downtown café is only open weekdays for lunch and early dinner, and does not serve the liang pi chilled noodles.)

For Non-Traditional: Myers and Chang 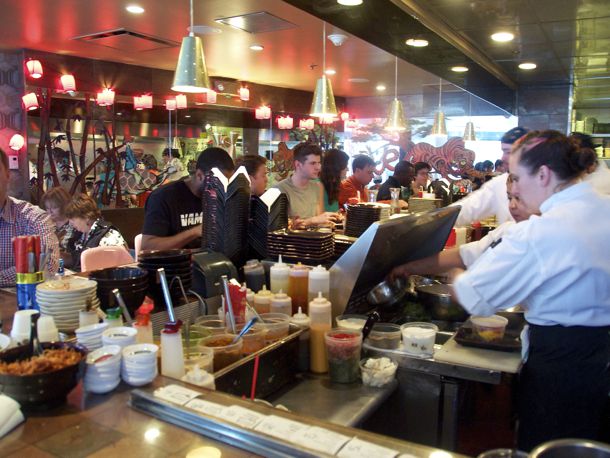 There's classic Chinese cuisine at the root of Myers and Chang, but chef Karen Akunowicz's menu at this hipster-y South End spot is anything but ordinary. There's tea-smoked ribs with smoked, marinated, and peppercorn-crusted meat so tender, it tugs easily off the bone; crispy Brussels sprouts; and an exceptional version of nasi goreng that's smoky and savory, thanks to homemade terasi (shrimp paste) and a good dose of wok hei.

A few other reasons this is place is a standout among local Chinese restaurants: First, this is no dive; the indie dining room is funky, polished, and features a big open kitchen with a bar for wok-watching. Those traits make it a great for-two spot, as does the Cheap Date Night deals on Monday and Tuesday nights, where a couple can choose from one of five for-two themed menus (The Pig Out, The Healthy Date) that cost $45. And the most obvious perk: This is Flour Bakery chef/owner Joanne Chang's place, so there are killer desserts like lemon-ginger mousse and coconut cream pie.