One day in December my husband and I found ourselves in Portsmouth for an errand so we decided to make the most of our trip and visit one of the very many fantastic restaurants in that town. We have always heard great things about Surf so that is where we went for lunch.

Surf has one of the best water views in all of Portsmouth, but unfortunately we were seated at a table overlooking Bow St. so that was a little sad. It was December, after all, so it was not a big deal and the sunshine in the window felt nice on a cold day. The beautiful light from the window was actually great for the photos, so I was pleased. I’m still curious about that view, and hopefully on another trip we’ll be able to sit on the other side of the dining room. 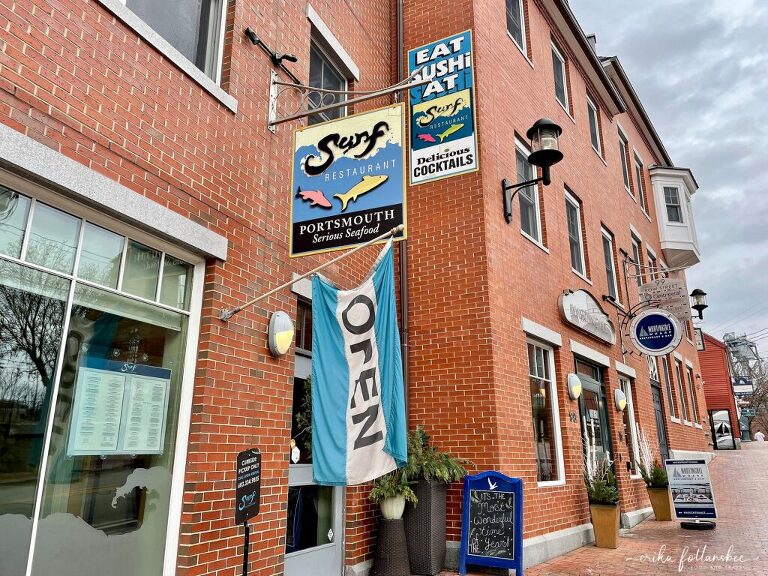 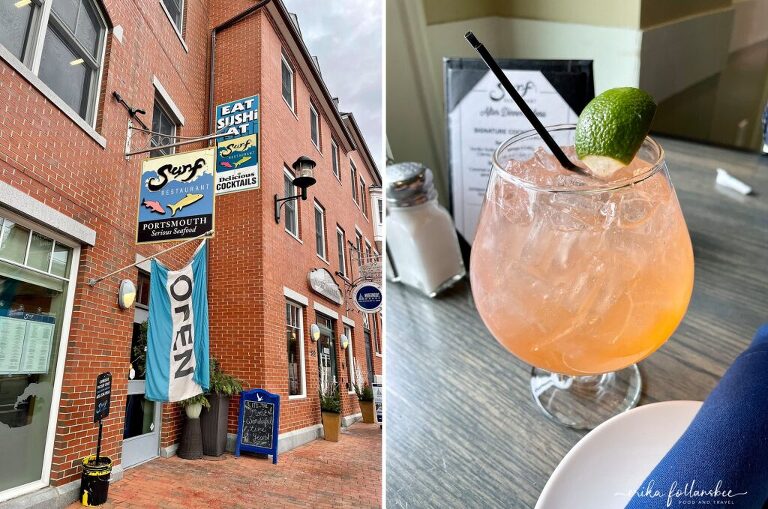 I immediately grabbed the drink menu to see what they offered. It was so hard to decide, but I finally went with La Paloma, which is Espolon Blanco, elderflower liqueur and aperol with grapefruit, lime and agave. It’s a lot like a margarita but less sweet and it’s a beautiful color. It’s also huge. Great for tequila lovers! 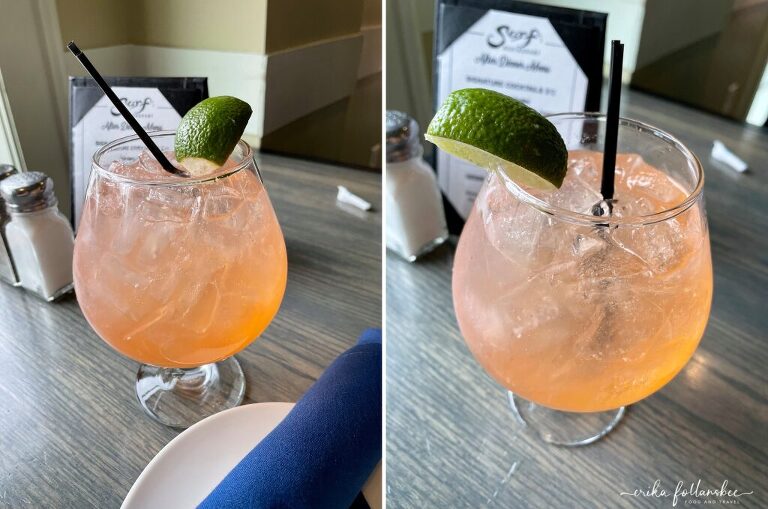 We tried the Shrimp and Chorizo Empanadas which are described as: two shrimp and chorizo empanadas served over mango salsa, drizzled with cilantro lime vinaigrette. That beautiful green color is so vivid, and made for a very interesting looking dish! The bubbly golden fried dough was quite crispy and there was lots of sauce to dip into.

Dave ordered the Fisherman’s Platter which had fried haddock, shrimp, scallops, and clams. It was served with french fries, slaw, and a creamy sauce that I believe was supposed to be tartar sauce but it didn’t have much flavor at all. Dave enjoyed it mostly and thought it was just ok. I don’t think he’s ever loved fried fish as much as the one at Bagg Lunch!

In times like these, I wish so much that I loved seafood! I play it pretty safe when it comes to seafood and I enjoy shrimp and white fish and salmon. Surf has such amazing looking sushi and raw bar items that it’s just a shame that I don’t like it, unfortunately.

I had the New England Baked Seafood Trio, which is haddock, scallops, and shrimp, baked with seasoned crumbs, lemon, white wine and butter . I’m not too sure about whether scallops agree with me, so I subbed those out for some extra shrimp. It was pretty good, but I think it was a little overcooked as you can see in the photo. It lost some of that buttery sweetness and kind of had a charred flavor. The chive mashed potatoes were good, though. In the end Dave and I kind of swapped entrees because we sort of liked the other’s dish better. Our server thought it was funny.

I was on my second Paloma, so I was doing just fine.

All in all, I’d say it wasn’t a perfect first trip to Surf but the service was excellent at least. I’d love to go back another time and try again. It could have just been an off day, and another visit would give us a chance to see that beautiful view I’ve heard about.

If you like Chef Michael Buckley’s other restaurants, check these out: