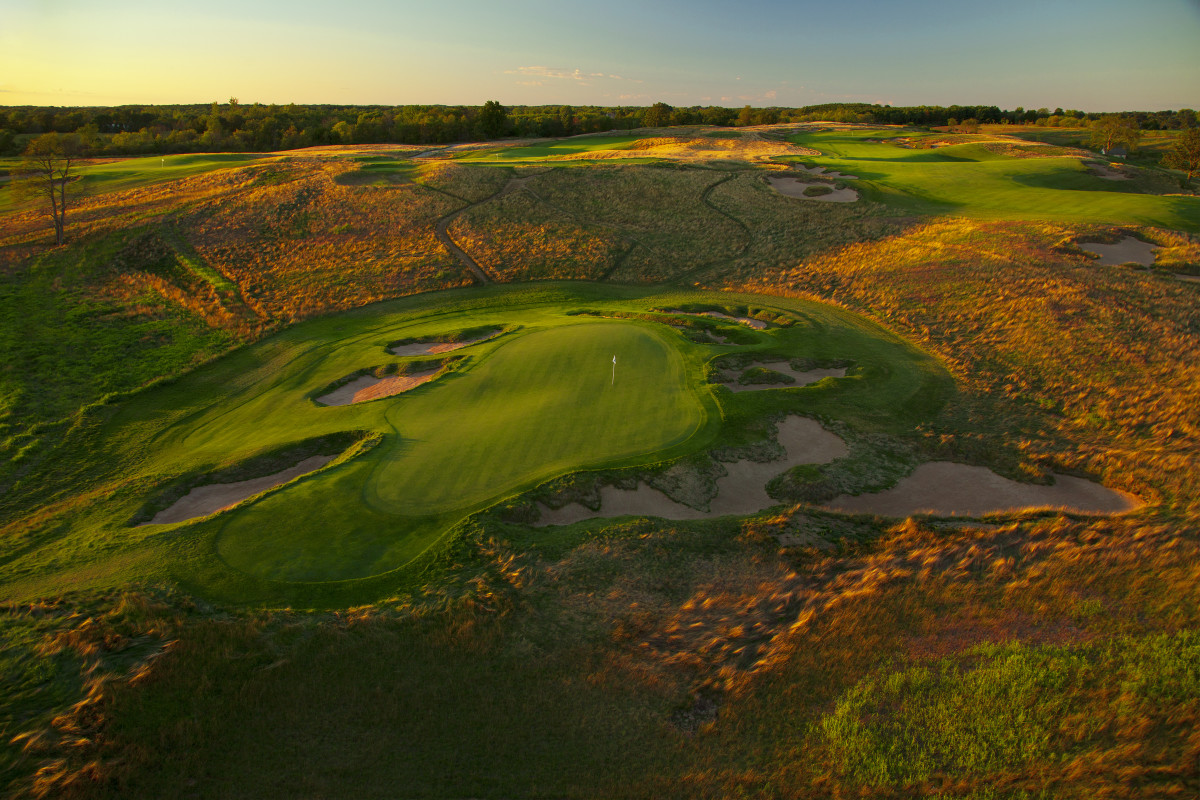 Aside from the Ryder Cup's host site, there are plenty of quality golf options, including a U.S. Open site, to build a trip to the Badger State around.

Any trip to Whistling Straits should include Erin Hills, which hosted the 2017 U.S. Open.

Whistling Straits is currently preparing for a full capacity of exuberant spectators on each competitive day of the Ryder Cup. If you’re one of the lucky fans with a ticket in hand, you’re likely already readying yourself for a trip to Kohler, Wis., later this month.

As you finalize your packing list, don’t forget your clubs. You won’t be able to play The Straits course — not unless you plan to extend your trip through at least the middle of the following week — however, as you make your way north from Milwaukee in the days leading up to golf’s most passionate international event, several other notable courses can be found, all worthy of your attention.

The following golf courses all offer exceptional playing conditions throughout the entire season. Whether you’re flying to the Badger State in three weeks’ time, or you’re planning a golf getaway to southeastern Wisconsin next year, these are the properties that need to be on your itinerary.

The Club at Lac La Belle

Instead of immediately heading due north from General Mitchell International Airport, golf enthusiasts with an affinity for classic, century-old courses should drive about half an hour north and west to Oconomowoc, a small city home to almost 17,000 residents, as well as The Club. With its roots stretching back to 1896, the club is one of Wisconsin’s oldest golf destinations; yet, the 6,906-yard course is both old and new thanks to a recent renovation conducted by Craig Haltom.

As part of the redesign, Haltom purposefully built green complexes that could be accessed by shots hit on the ground — an homage to the style of golf played during the era in which the club was formed — but he also cleared out hundreds of what he calls “nuisance trees” to broaden the course and to spotlight more than 100 giant old oaks and white pines that now accentuate individual golf holes and add character to the overall layout.

“The new course feels big in a way the old routing and tree plantings simply did not allow,” he said, “and the individual golf holes feature plenty of interesting width.”

Less than 10 miles northeast of Lac La Belle stands a more modern marvel of captivating golf architecture. Opened for play in 2006, Erin Hills has been brandished with the slogan, “a course 10,000 years in the making,” since the undulating topography of the site was formed thousands of years ago when glaciers receded from the area.

Despite the site’s naturally formed terrain, every hole at Erin Hills is characterized by distinctive changes in elevation. That continues to amaze head golf professional Jim Lombardo, even after 15 years spent working there.

“You would never have thought a course naturally shaped by glaciers would have such incredible elevation change on almost every hole,” he said. “It’s remarkable.”

Unless you already have a tee time booked, don’t expect to get on during the week of the Ryder Cup (or really any time during the month of September). Lombardo acknowledges that almost every tee time for the month has been fully booked for much of the year — and long wait lists already exist. That said, when you do get the chance to tee it up at Erin Hills, make sure you leave your ego at the front gate and take a conservative approach when selecting the tee boxes that you’ll play. A quick scan of the scorecard will tell you all you need to know. Yes, the black tees, which play more than 7,700 yards, boast a course rating of 77.9 and a slope rating of 145; but even the green/white combo tees, which are far more manageable at 6,465 yards, carry a course rating of even par and a slope rating of 132.

“If you play the right set of tees out here, you’ll be challenged but not overwhelmed,” Lombardo said. “People who play too far back are in trouble off the tee all day long. Even if you’re on the fence between two tee boxes, start with the ones that are a little closer. The course is hard enough as it is.”

After a larger-than-life round of golf at a U.S. Open venue, a tee time at Washington County Golf Course might be just the thing to recalibrate your game. The city-owned course, which once made the ranks of the country’s best municipal layouts (as determined by golf’s most popular publications), is only 6 miles from Erin Hills. As such, it delivers equally stunning views of the surrounding Kettle Moraine region. Rumor has it that Erin Hills’ caddies will venture here for rounds played for more than just bragging rights when they’re not down the street shouldering other players’ bags.

Golfers traveling to Whistling Straits on Interstate 43 will, at the halfway mark of their journey, see signs for The Bog, a signature design of Arnold Palmer and seemingly the only golf course in the area that is boldly advertised along the most direct route from Milwaukee to Kohler.

The layout offers five sets of tees, which play from just over 5,100 yards to slightly more than 7,200 yards in length. As its name suggests, the course meanders across 297 acres that are punctuated by the Cedarburg Bog, wetlands, and protected wildlife habitats. Golfers familiar with Palmer designs will recognize his preferred architectural features: generous landing areas in the fairways, rolling hills, and plenty of bunkers — 118 of them, to be exact.

The Bull at Pinehurst Farms

Just before they arrive in Kohler, avid golfers should venture into Sheboygan Falls to play the only Jack Nicklaus Signature golf course in the state. The Bull at Pinehurst Farms was built on a tract of land that once housed a dairy farm, and while first-time players might focus on that connection to explain the course’s name, they would be better suited thinking about the challenges that cowboys typically face as they try to keep themselves in the saddle when strapped to a rodeo bull. Simply put, this 7,300-yard course can be a bull, especially for players who find themselves playing out of its many cavernous fairway and greenside bunkers.

Not far from that Nicklaus design, golfers can tee it up at Blackwolf Run, the site of the original 18 holes of golf that Pete Dye designed for Herb Kohler back in the late 1980s. Today, the property is home to two distinctive courses — The River and Meadow Valleys — both of which feature holes that play through a glacial river valley.

The River is known for being a shotmaker’s course, but both layouts will challenge players of all ability levels, especially when weather fronts roll in and the wind picks up. That said, Daniel Hastreiter, the head professional at Blackwolf Run, acknowledges that both courses can also accommodate all playing styles.

“The courses are accepting of any type of shot shape,” he said. “So if you can bring something that you’re confident with, you’re not going to have any difficulty playing the courses and having a good time.”

At Whistling Straits, 9 miles to the north, The Straits course garners most of the attention thanks to its PGA Championship and soon-to-be Ryder Cup pedigree. But The Irish course presents a lot of the same challenges, albeit without the dramatic visuals that come with The Straits’ lakefront real estate.

“A lot of amateurs make the mistake of lining up with the tee box, and Pete Dye was notorious for aiming those tee boxes at trouble,” said Mike Aschenbach, the head professional at Whistling Straits. “So make sure you’re choosing a target that’s above the ground and not using the tee box cut lines to get yourself lined up.

“Once you’re out on the course, you want to keep the green in front of you. If you may mishit an approach shot, you always want to come up short. The fairway is going to run right into the green on a lot of the holes; but if you go over the backside, you’re in a lot of trouble.”