The distinction between dinner and entertainment has blurred. Long gone are the days of bad bowling alley nachos and stale movie theater popcorn as the only edible options when you’re out on the town. Now, you can eat a full meal between frames and dive into a pizza or salad as the opening credits roll.

Entertainment-focused bars and restaurants have a long history in D-FW. Dave & Buster’s opened its first location in Dallas in 1982. Topgolf, the high-tech driving range, restaurant and bar, was founded in the United Kingdom but settled its stateside headquarters in Dallas in 2007 and now operates additional locations in Fort Worth, Allen and The Colony.

Pinstack, which combines a full-service restaurant and bar with a bowling alley, laser tag arena, rock climbing wall and ropes course, opened its first venue in Plano in 2015, and it now operates others in Las Colinas and Allen. Punch Bowl Social — a concept combining a bar and restaurant with bowling, karaoke rooms, table tennis, darts and arcade games — got its start in Denver, opened in Deep Ellum in 2019 and now counts more than a dozen locations across the country.

With a good track record of success, Dallas is now welcoming a slew of other “eat-ertainment” destinations to town, with concepts including shuffleboard, pickleball, soccer, golf and video games.

“From Day One, we knew that Dallas is where we wanted to launch the brand ahead of further expansion in the U.S.,” says Gene Ball, the U.S. CEO of Electric Shuffle, a high-tech shuffleboard concept from London that features custom-built tables meant for group play. He calls Dallas an incubator for social entertainment in the country.

“As for Deep Ellum, there is so much rich history, character and soul; it is the perfect place to call home,” he says of the location that opened in late 2021. 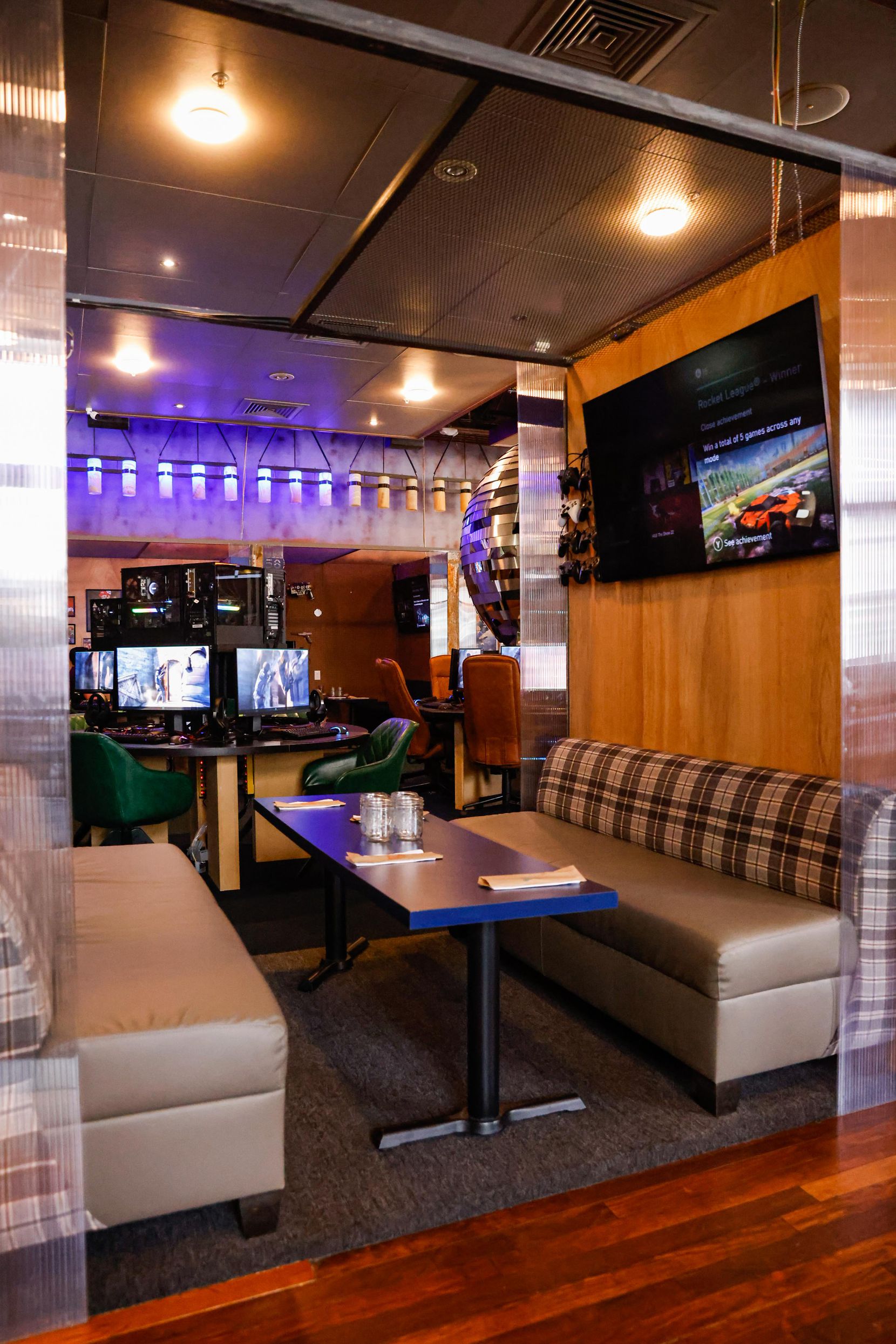 Max Seel, the owner of Farm + Feed in Plano, says he was inspired to create a space where gamers and geeks could enjoy themselves in an inclusive setting.

TOCA Social is another London export that’s betting big on Dallas. It’s rehabbing a Design District warehouse into a 56,000-square-foot, three-story space with a full-service restaurant, multiple bars and 34 soccer boxes featuring artificial turf and interactive screens. The company is on pace to open in 2023.

“There’s no better place for TOCA Social to be,” says Zach Shor, senior vice president of TOCA Social U.S. He says the brand is a believer in Dallas, noting that the city has become an important hub for entertainment and tech and has great demographics, with people who want to get out and try new things.

Originally from Kansas City, Chicken N Pickle is capitalizing on pickleball — the fastest-growing sport in America — with a 4-acre complex in Grand Prairie and another location opening soon in Grapevine. The Grand Prairie outpost features 11 pickleball courts, multiple bars, a restaurant and other games like cornhole and table tennis. General manager Chris Bohn says that pickleball draws a diverse crowd, with players ages 9 to 90. New players can participate in “newbie nights” or take lessons with the on-staff pickleball pros.

Patrons who want to pair food and drinks with video games have more options now, in addition to long-tenured Barcadia and the Bishop Cidercade. Farm + Feed opened in early 2022, bringing all the latest video game console, PC and table-top games to The Shops at Legacy in Plano. There’s also FlashBack RetroPub, a vintage arcade bar that began in Oklahoma City in 2015 and expanded onto Davis Street just outside the Bishop Arts District in January.

Farm + Feed owner Max Seel says that he was inspired to create a space where gamers and geeks could enjoy themselves in an inclusive setting. “I grew up playing video games and D&D late into the night, always with plenty of food and drinks. It was a great way to meet people and make friends, but as everything has moved virtual, that ability to socialize in person has gone away,” he says.

It was important to him to give gamers a place to congregate and socialize. “We believe that games are more fun when enjoyed together,” he says.

These are six new or coming-soon gaming and entertainment destinations to check out across Dallas-Fort Worth. 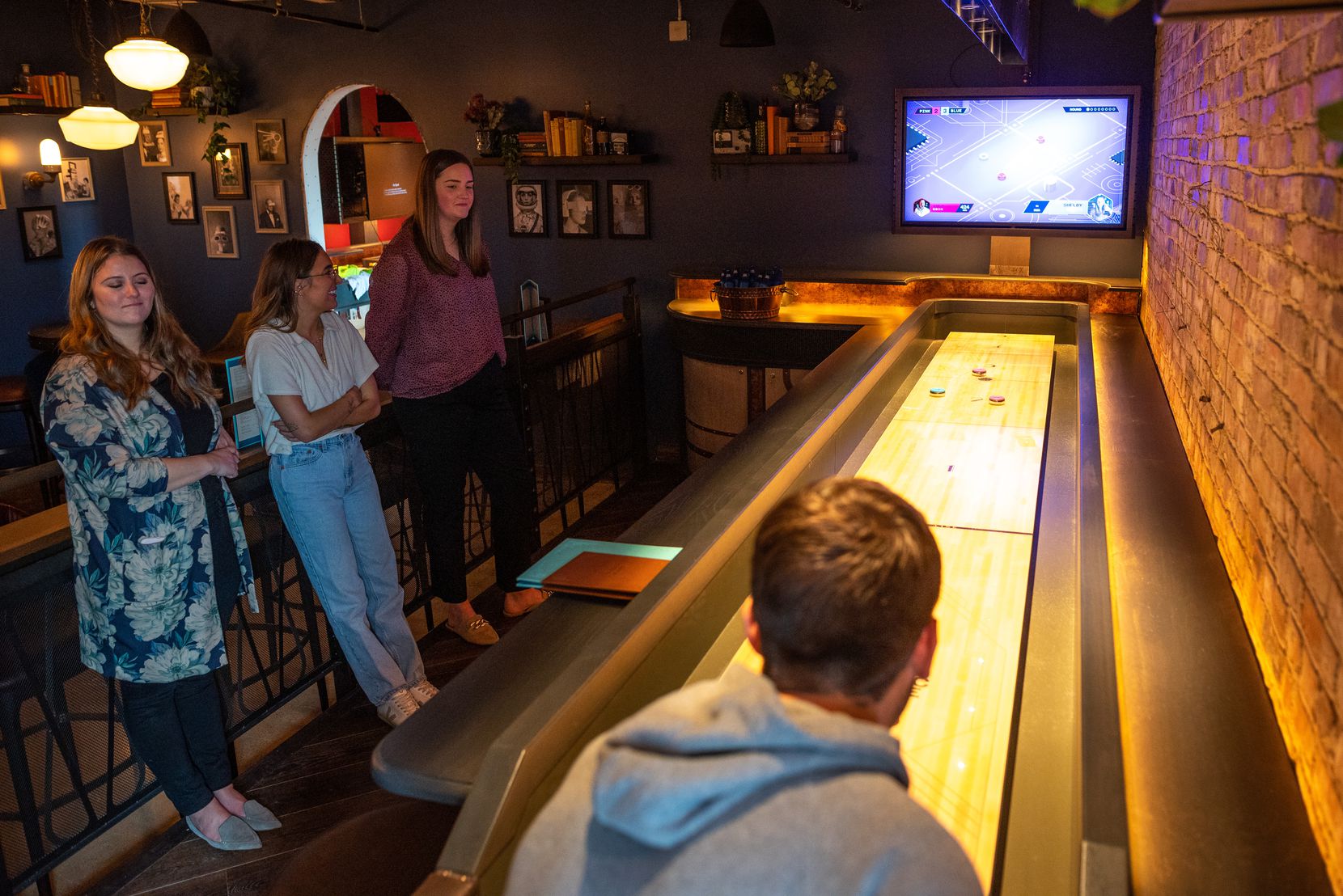 A century-old Deep Ellum building houses Electric Shuffle, with two good-looking bars, 17 shuffleboard tables and private event spaces. Those tables were custom-built and feature interactive gameplay that can accommodate up to 24 people at once, keeping score so you don’t have to. Menu items include pizzas, burgers, sandwiches and bowls. 2615 Elm St., Dallas.

Open in The Colony since summer 2021, this upscale miniature golf course has four nine-hole courses, each with a different theme and automatic scoring. The restaurant puts out charcuterie boards, potstickers, sliders and several pizzas. The Puttery follows Another Round, a mini golf concept that opened in West Dallas in 2020. 5762 Grandscape Blvd., Suite 105, The Colony. 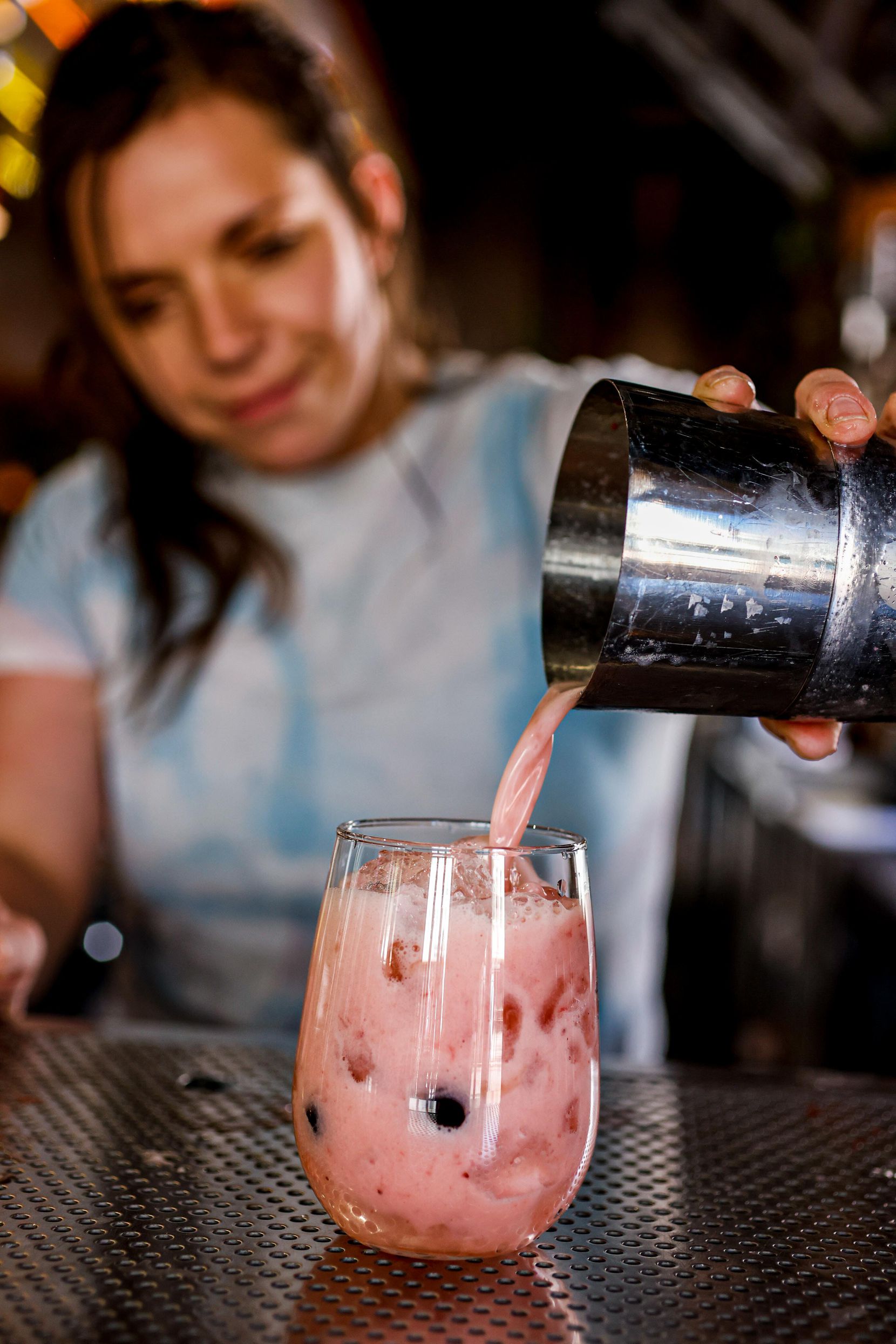 Designed with a post-apocalyptic theme, Farm + Feed outfitted its 8,000-square-foot interior with sections dedicated to console gaming, PC gaming and analog board games. Couches and large TVs are spread throughout the space, and there’s a patio. The menu offers beer, themed cocktails and game-friendly food, like pizza rolls, sliders and grilled pork lettuce wraps. 7401 Lone Star Drive, B120, Plano.

Step back in time with 60-plus arcade games from the ‘80s and ‘90s, plus old-school consoles like NES, Sega Genesis and Nintendo 64. The bar serves dozens of craft beers, and while there’s no food, you can bring in takeout from neighboring Neony Pizza Works. 821 W. Davis St.

Located at Music City Mall in Lewisville, iCompete Experience is a 30,000-square-foot sports eatertainment center offering golf simulators, batting cages, axe throwing and a full menu featuring wings, tacos and flatbreads. If you’re thirsty, head over to the Beer Wall, where you can use a prepaid card to pour your own draft beers. 2405 S. Stemmons Freeway, #200, Lewisville.

Slated to open in 2023, Toca Social’s first U.S. location will inhabit a three-story Design District building with skyline views. Participants can play various soccer games in turf-clad boxes, kicking the ball at an interactive screen to score points. The globally inspired food and drinks are served via a full kitchen and four bars, including a dessert bar. Coming in 2023 to the Design District.

The Dallas Morning News covers all things esports in North Texas, including daily stories about OpTic Texas of the Call of Duty League and the Overwatch League’s Dallas Fuel. Follow esports reporter Sean Collins on Twitter via @seanzcollins and read more at dallasnews.com/esports.