Bad Company is the Stand of Keicho Nijimura featured in Diamond Is Umbreakable.

Bad Company appears as a group of 60 Patchwork soldiers, an uncertain amount of Green Berets (possibly part of the 60 soldiers), 4 helicopters modeled after the Boeing AH-64 Apache, and 7 tanks modeled after the M1 Abrams, all armed to the teeth and dressed similar to American G.I.s. Much like the figures they are based on, all the units in Bad Company are scaled down to size and resemble something like sentient toys. They serve Keicho without question, but are shown talking to one another and making very careful maneuvers. 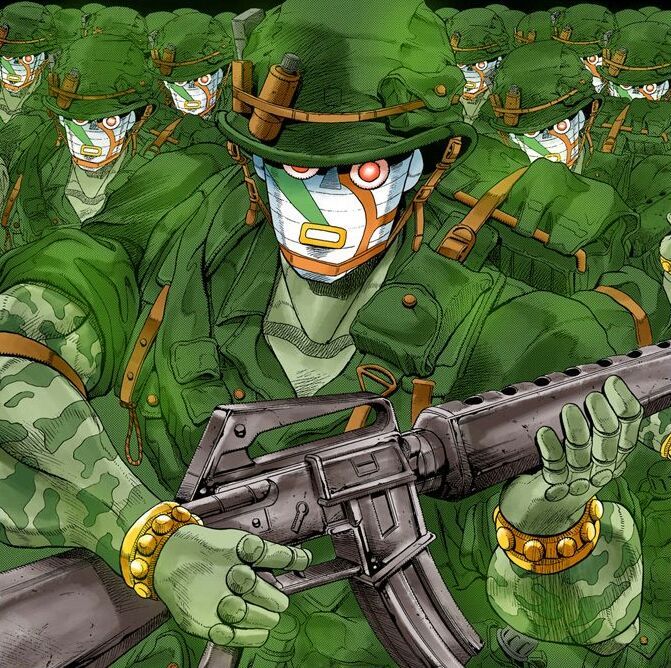 Tiny But Mighty: Bad Company is a group of hand-held soldiers, but by no means does that make them weak. A pair of missiles from one of the helicopters was enough to shatter Crazy Diamond's arm, and the soldier's Mini-M16s are able to punch through human skin with as much force as a normal-sized bullet. 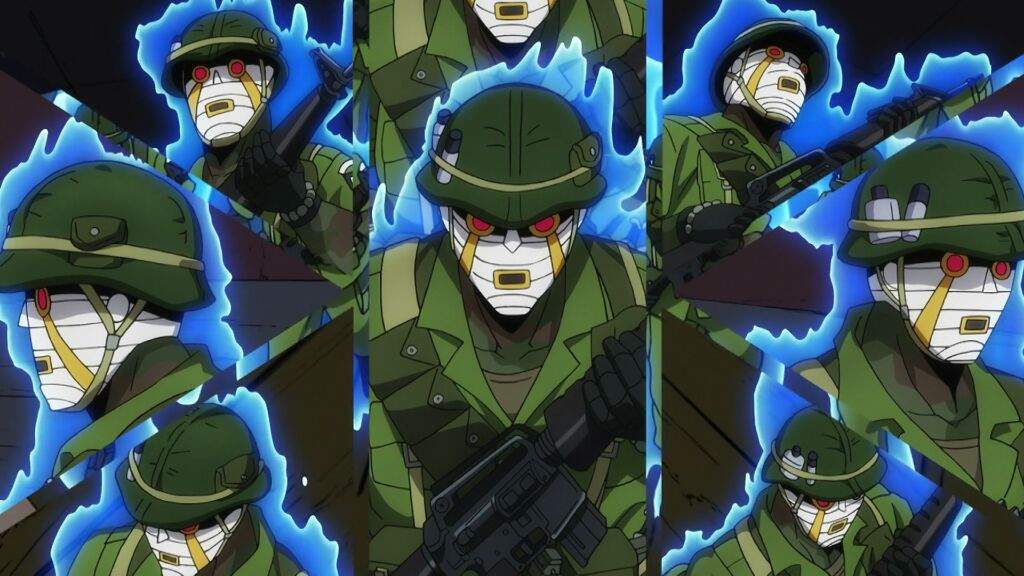 Armed to the Teeth: Each of Bad Company's soldiers is armed with a M16 assault rifle, a parachute, and a combat knife. The Green Berets have the same equipment as the soldiers, but with the addition of a rappelling rope to allow them to climb objects. The helicopters are armed with machine guns and missiles, and the tanks seem to have scaled-down Armor Piercing Ammunition, Bad Company is also equipped with mines. 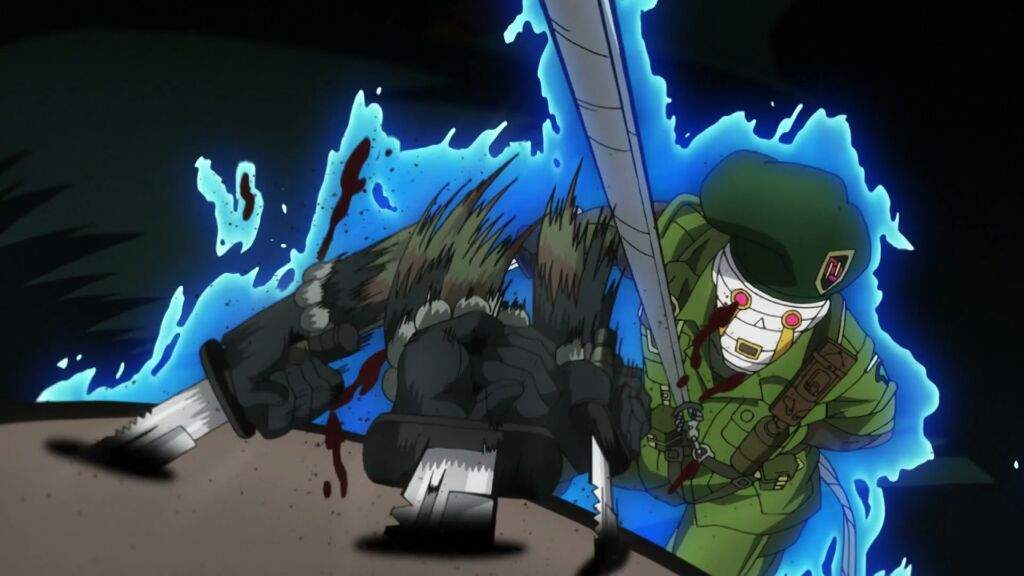 Lack of Transmitting: Bad Company does not transfer individual pain to the User. When three of the soldiers were crushed, Keicho simply said it ruined the formation. It is not known if killing all the soldiers, helicopters, and tanks would kill Keicho too, but no mention of the fact is suggested. 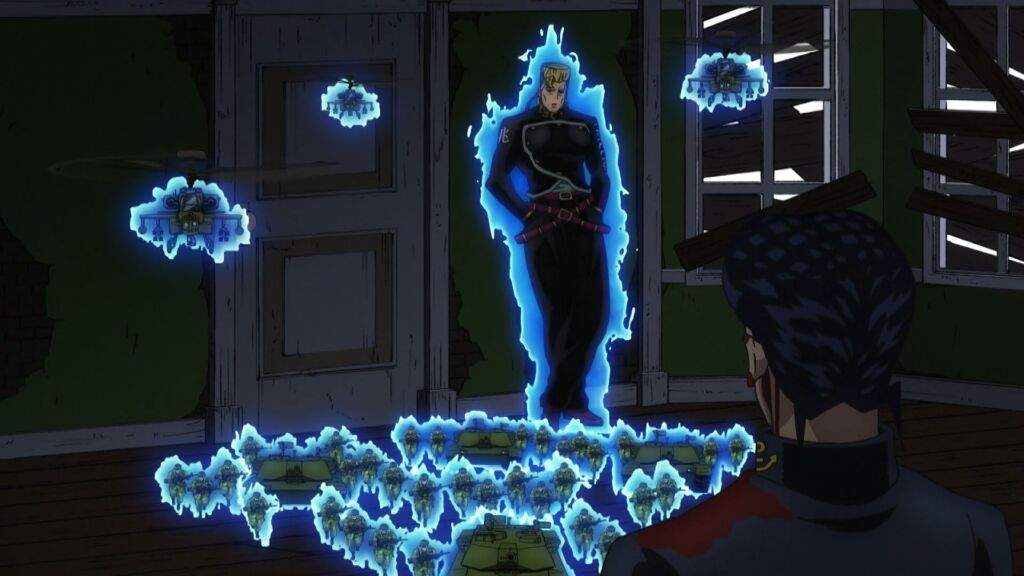 Wall of Steel: Bad Company is able to concentrate its fire on any projectile coming toward Keicho, even if it is small as a nail. Keicho describes this barrage as being like a wall of steel, protecting him automatically from anything that enters the Stand's range. That way, it's very hard to attack the Stand user directly, be it with physical attacks or projectiles. 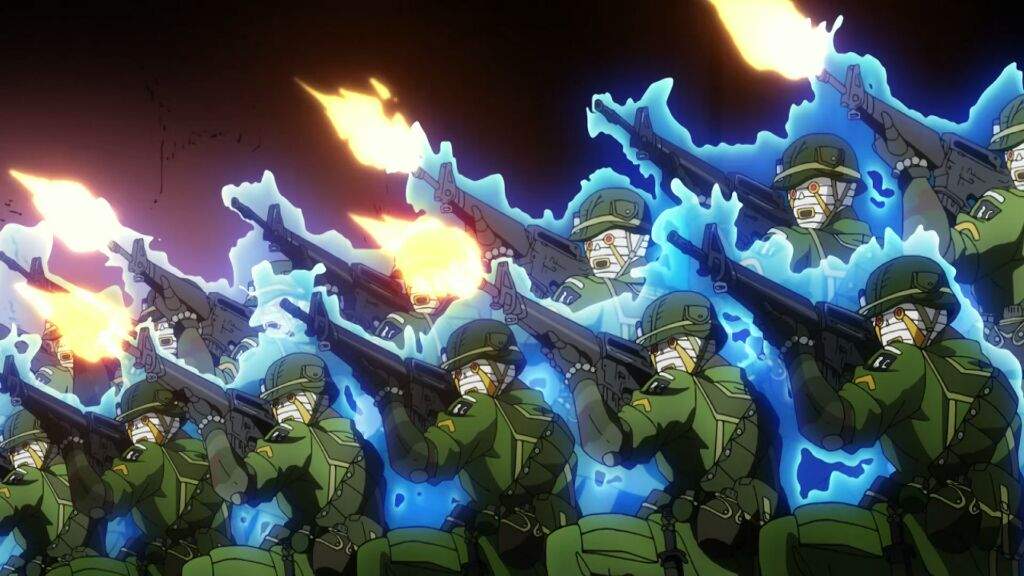