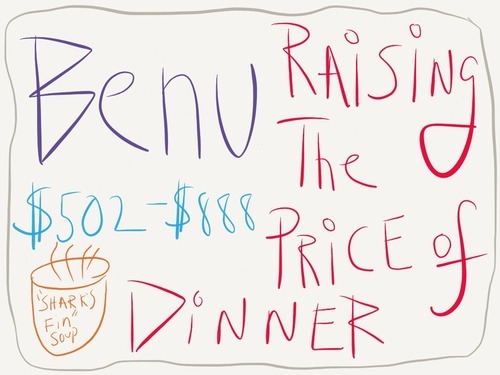 Benu, a two Michelin-starred San Francisco restaurant that’s famous for its faux-shark’s fin soup, has raised the price of dinner by $15 to $195. So a meal for two, after tax and tip, will now cost $502, or $888 after wine pairings — quite an auspicious number! All-in-all it’s a modest 8% hike. Also, Benu now no longer offers an a la carte menu.

The $195 prix-fixe is more or less in line with what other two-Michelin-starred restaurants in The Bay Area are charging for long tastings. Coi is $175; Atelier Crenn asks $180; Manresa is $185; Saison is $248. And $195 is also what Atera charges in New York, as does Blanca. Will Guidara and Daniel Humm's Eleven Madison Park used to ask $195, but recently HIKED its price to $225, which is what Benu would like to charge, as we’ll learn below.

Benu’s chef-owner Corey Lee was nice enough to chat with us about his new pricing, about his decision to go tasting menu-only, and the debate over tipping. Here’s our conversation, which took place over email on Thursday:

Why did you increase the price of dinner to $195? Are rising food and labor costs involved? I raised the menu to $195 because I’m not ready to raise it to $225, which is what it should be. That would give Benu more standard industry margins. Are labor and food costs involved? Of course, but they´re two of many costs that are increasing at a pace much higher than what the public is ready to pay for these kinds of restaurant experiences. 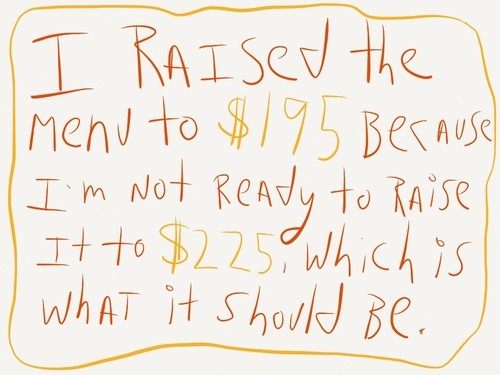 How has Benu’s menu evolved as you’ve increased the prices? Am I wrong in noticing that the online menu appears a course or two longer than in the past? The menu has evolved tremendously. In the terms of length, I personally don´t think it is a good or accurate measure of value, but yes, it has increased. I think the more significant ways we have evolved are the refinement of food and products, service, and dining room.

Previously you offered an a la carte menu on Tuesdays, Wednesdays and Thursdays. How have guests responded to Benu becoming a tasting menu-only venue? It was our guests who lead us to change our program. When I first opened Benu, I had intended for it to be a more casual restaurant and I thought the a la carte menu would be what most guested opted for. But it was obvious from day one that people saw Benu as a destination, special occasion restaurant.

We were preparing a large a la carte menu everyday and most people ordered the tasting menu. So last year we started to only offer the a la carte on the weeknights, but as that trend continued, we decided to offer only the tasting. This helps us focus and consolidate our efforts and resources on what most of our guests are ordering, and I think that allows us to offer better quality and value.

Have you ever considered adopting the European-style service-included pricing of The French Laundry (where you worked as chef de cuisine)? Some argue such policies can help reduce the income disparity between front-of-the-house and back-of-the-house, while others are skeptical whether a restaurant can remain competitive by going service-included unilaterally, because of the risk of service staff defections. That´s the business model of the restaurant I worked in for nearly a decade. So yes, of course I’ve thought about adding a service charge. But many American diners aren’t ready for service compris and I´m sensitive to that. We´re not the French Laundry. We´re a small, still relatively new restaurant and we can´t model our pricing policies after institutions that have been around for 15+ years.

And yes, I think it does help balance the income disparity between boh and foh, but because of the other argument you mentioned, the disparity will still remain large and illogical. For me, the biggest thing that´s overlooked is that California does not have a tip credit*. I´m shocked at how restaurateurs don´t mention this every chance they get. You emailed me to ask me about a $15 increase to our menu, but if we had a tip credit like New York, I could probably lower our menu by $20. So comparing boh/foh income disparities between restaurants in New York and ones in San Francisco is impossible. I think it´s ridiculous that we don´t have a tip credit here, and is an example of disconnect and ignorance in government, and also how our industry is still widely uninformed, un-unified, and immobile (Corey Lee). 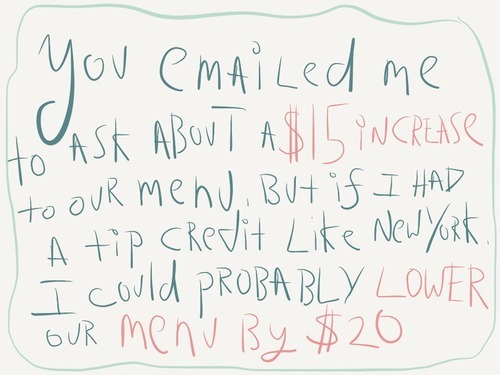 *Editor’s Note: Waiters in most states make the tipped minimum, which is lower than the federal minimum because those workers make up the rest of their pay through gratuities. In New York the tipped-minimum is $2.25 for food-service workers, while the regular minimum is $7.25 for full-wage workers. But in California, there is no tip-credit, which means waiters must typically earn the full state minimum of $8.00. And in San Francisco, where the full minimum is higher, all waiters must earn at least $10.55.

The only states or territories without the tip-credit are Alaska, California, Guam, Minnesota, Montana, Nevada, Oregon and Washington.