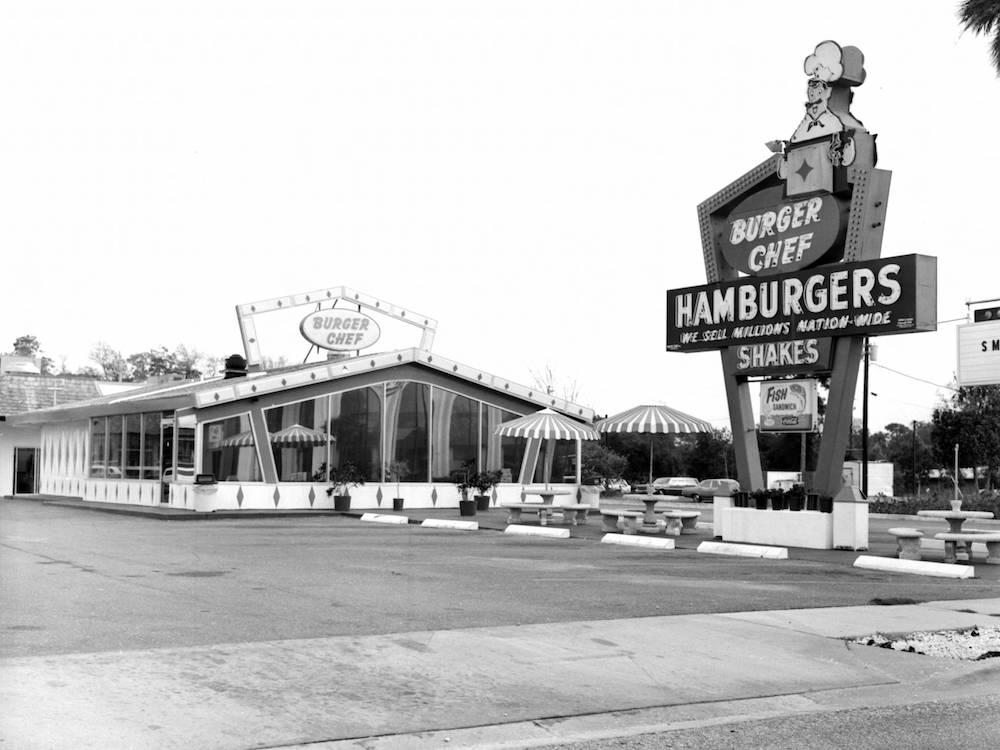 When remembering Burger Chef, you need to take into consideration what they were able to accomplish in such a short time. I had never even heard of Burger Chef until my friend Jim Winters ended up gifting me with an old Burger Chef sign.

One week later I was well versed in it. The burger steward side of me had been awakened. It would be the start of my collection that would culminate with the opening of my Burger Museum.

The first step was to design and create a broiler to cook burgers. They even went so far as to advertise their first location as “Indianapolis’ first Florida-style self-service drive-in!” in the Indianapolis News on March 24, 1957.

In just ten years, Burger Chef became the second-largest burger chain, with only about one hundred fewer locations than McDonald’s. General Foods Corporation purchased the Burger Chef chain in 1968, which helped to fund its rapid expansion. 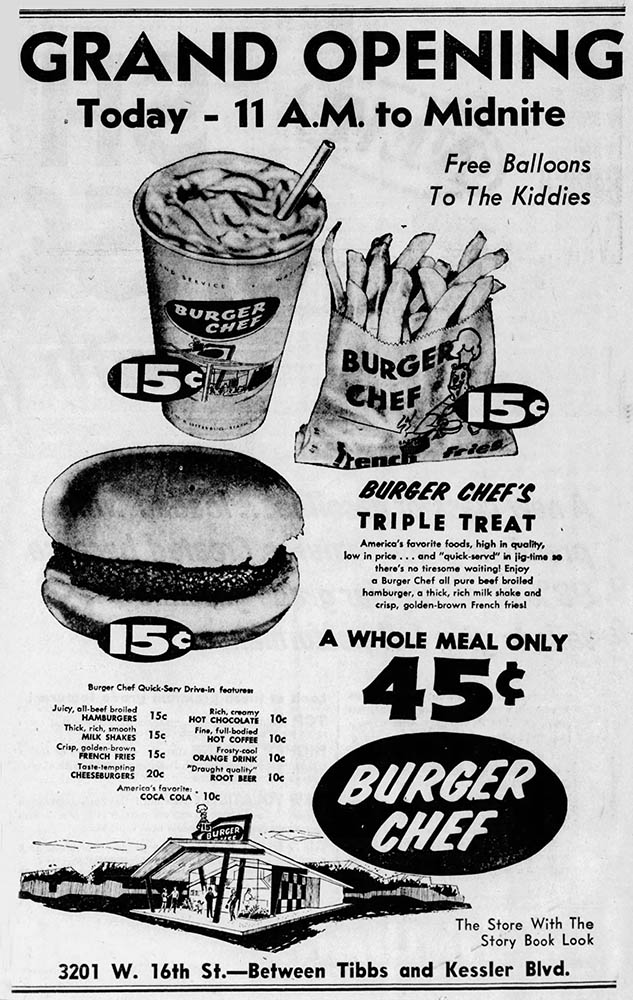 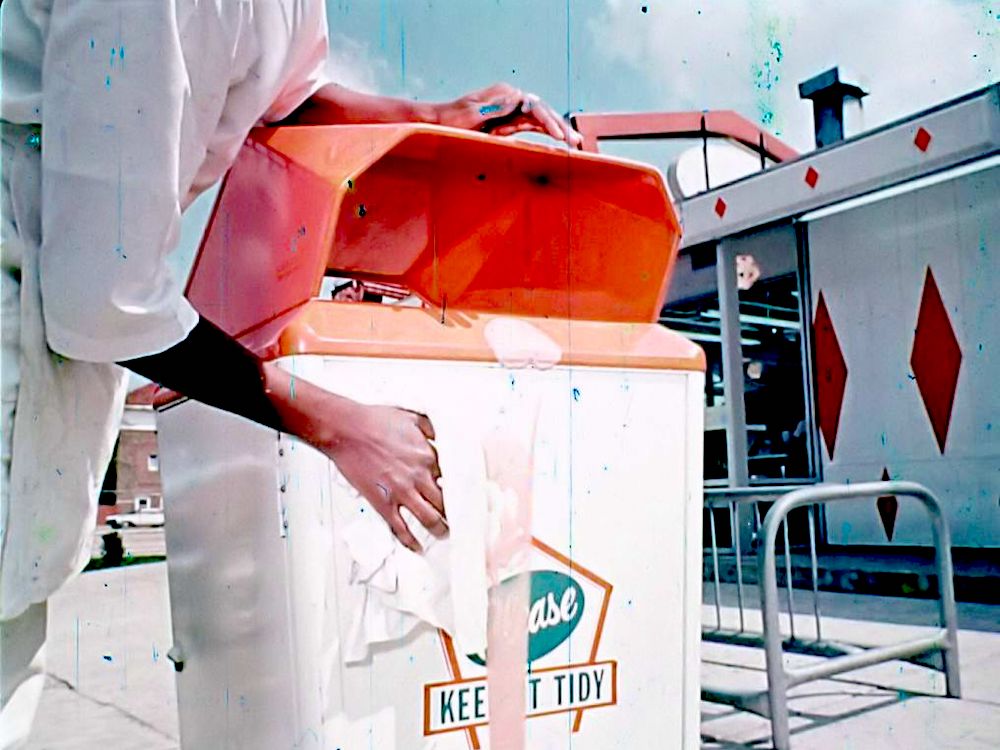 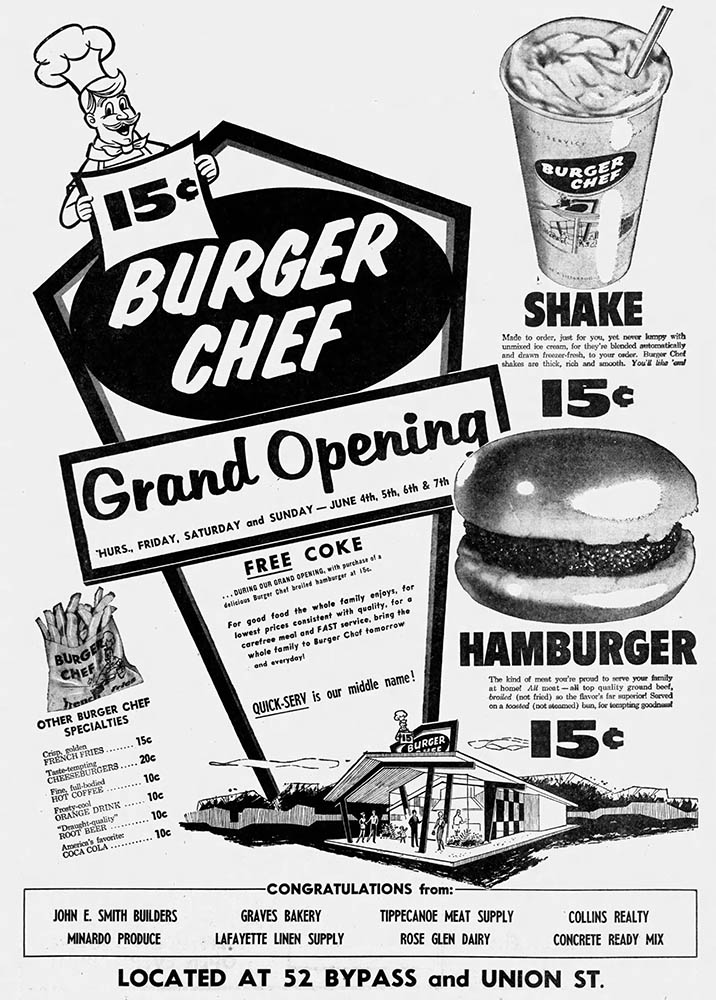 The late 1970s and early 1980s were not kind to Burger Chef as they struggled financially. In 1982, the 679 locations of Burger Chef (420 of which were franchised) were purchased by Hardee’s for forty-four million dollars.

Many Burger Chef locations were converted to Hardee’s, while franchises or restaurants near pre-existing Hardee’s were allowed to switch to a different brand altogether. Some independent Burger Chefs continued to operate for years after the Hardee’s purchase.

The last Burger Chef restaurant in Cookeville, Tennessee, closed when its franchise agreement expired in 1996. For those of you still longing for a Burger Chef fix, Hardee’s has been known to bring back the Big Chef from time to time at some of their Midwestern locations. 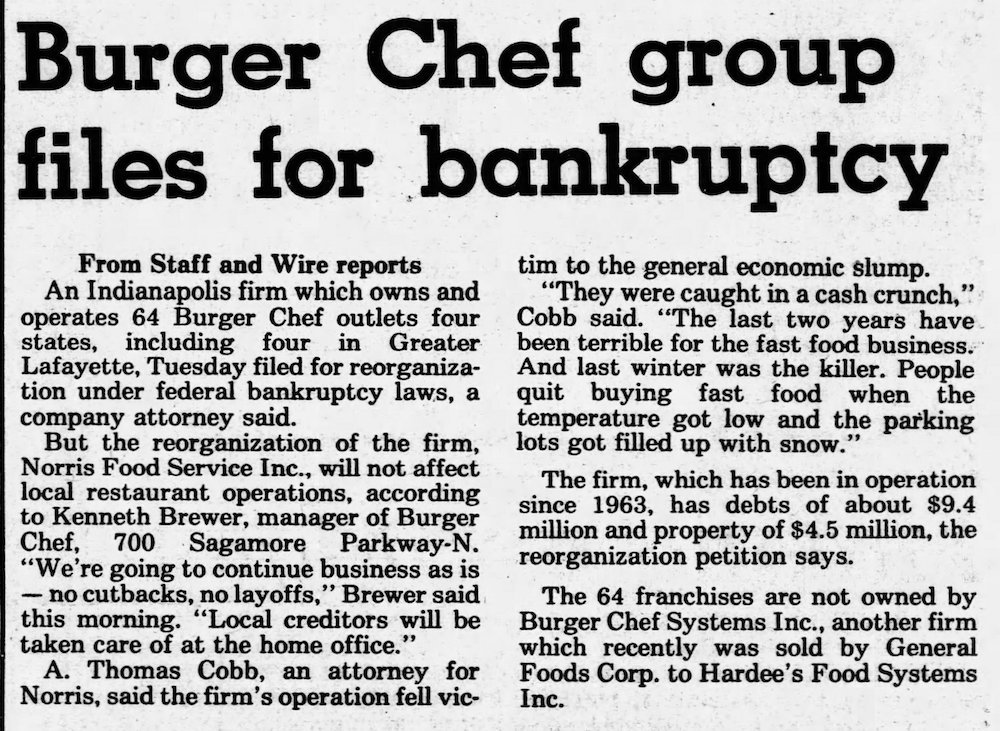 Burger Chef’s Funmeal, which debuted in 1973, featured Burger Chef and Jeff as well as Burgerini, Count Fangburger, Burgerilla, and Cackleburger. Their mascots were Burger Chef and his younger sidekick Jeff. Each Funmeal cardboard box included riddles and puzzles galore and a small toy.

McDonald’s later introduced their Happy Meal, a similar concept. Burger Chef sued them in 1979 but ultimately lost the $5.5 million lawsuit 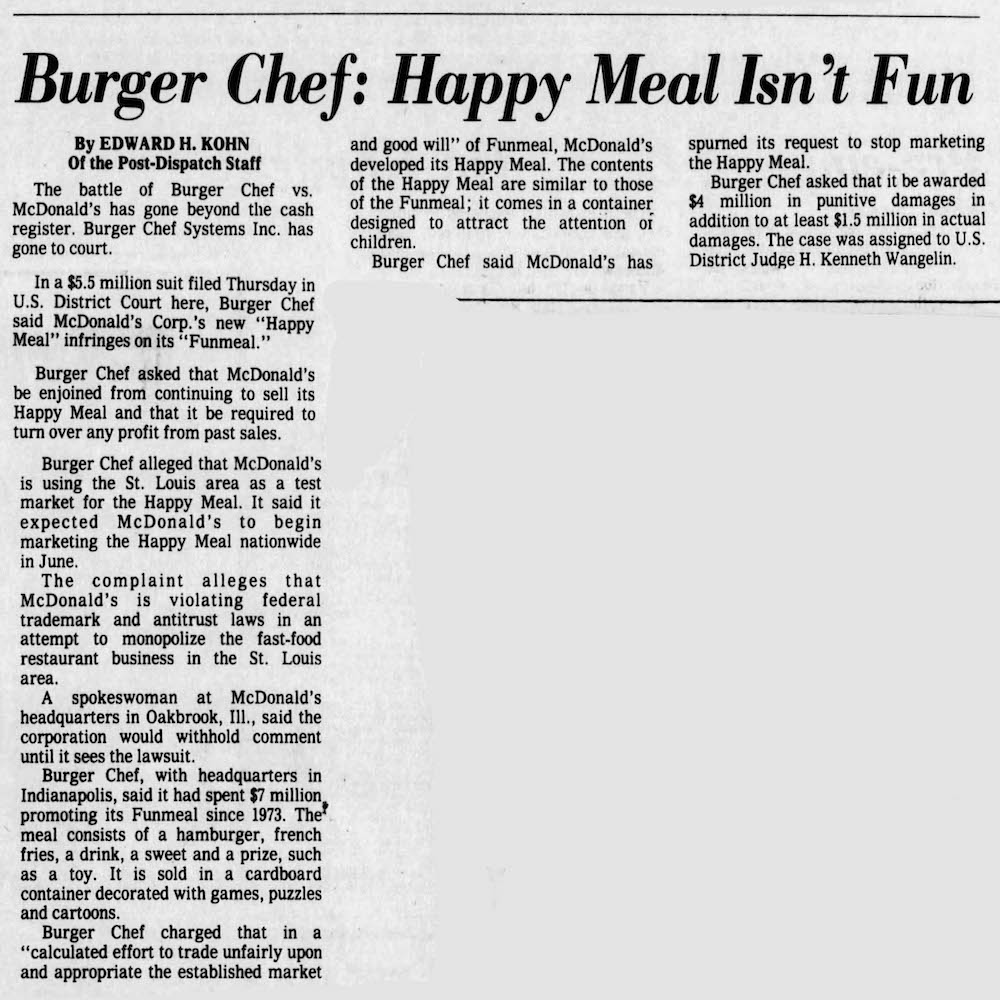 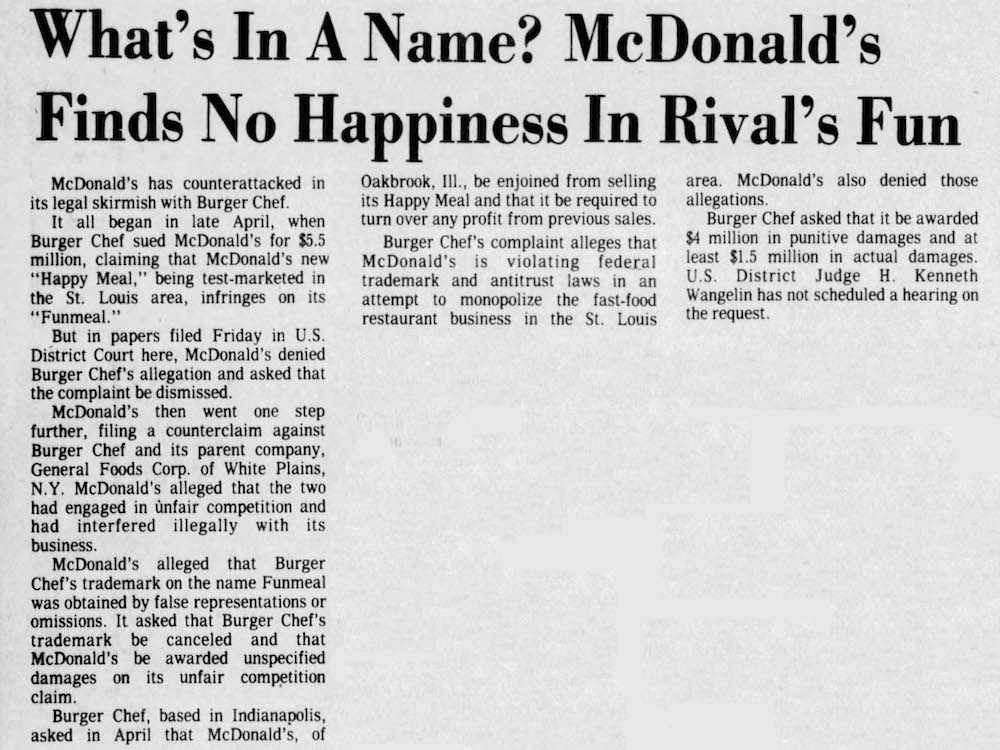 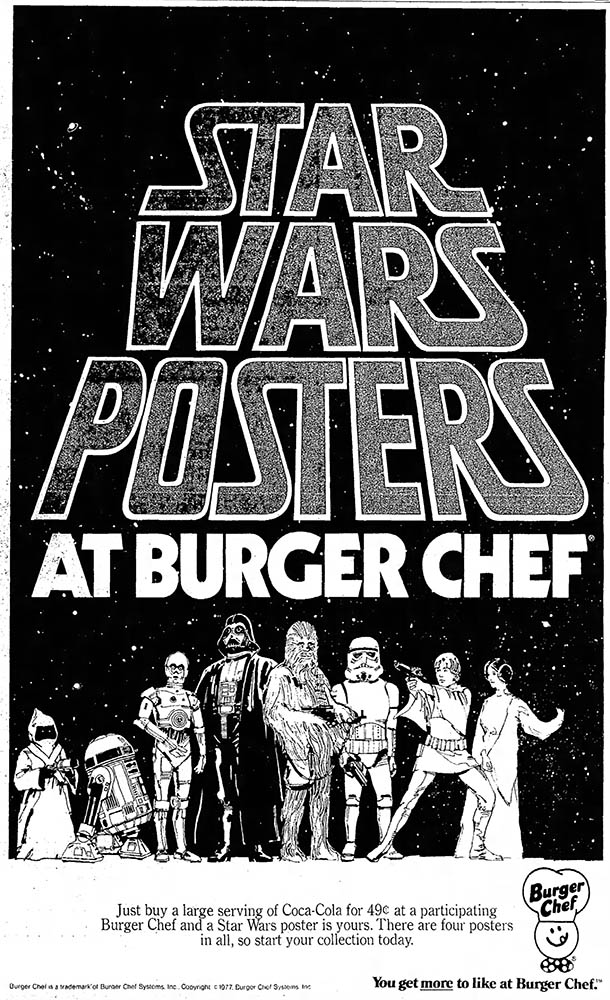 During Star Wars and Empire Strikes Back’s original theatrical releases in 1977 and 1980, Burger Chef gave away posters with the purchase of a soft drink. The original posters are highly collectible and can be found on eBay.

Be careful; there are now reprints out there, so make sure to ask the seller where they got the posters before you buy them. 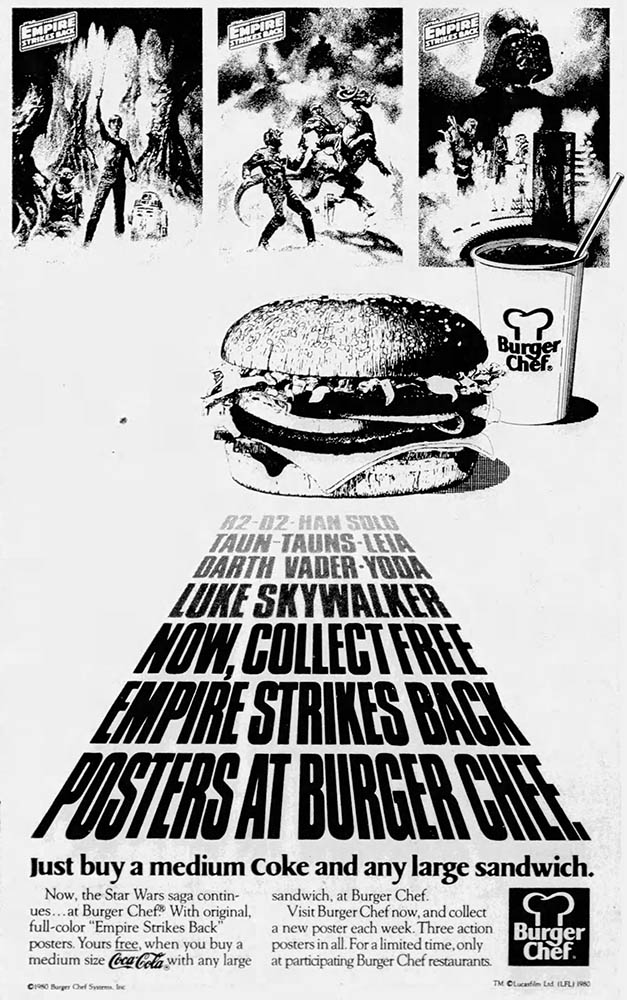 I found this collection of Burger Chef commercials on youtube and knew instantly that you needed to see them.

You can see a Burger Chef restaurant in action on season seven of the TV show Mad Men. Burger Chef was one of the clients of the program’s fictional advertising firm, Sterling Cooper.

The production crew took Jim’s Burgers (now Chris’s Burgers) in Rialto, California, a former Burger Chef building, and painstakingly brought it back to its former glory inside and out.

Vicki’s Lunch Van in Montgomery, Alabama, and Jack’s Old Fashion Hamburger House in Fort Lauderdale, Florida, are both located in former Burger Chef buildings. They have one other thing in common; both serve awesome old-school burgers.

Most locations below have still the original building structure and sign outside. In some cases, the building may have been modified, or a repurposed sign is all that is left.

Can you think of anyone I’ve left out? Please leave a comment below so I can keep this list updated.

*Where the Mad Men episode was filmed.
**Not original Burger Chef restaurant location but a refurbished signed was moved there

What Happened to Burger Chef? Video

My friend Troy at Restaurant Rewind did a great job on this What Happened to Burger Chef? video.

There is more Burger Chef information if you dig a little, I’d suggest you check out the links below.