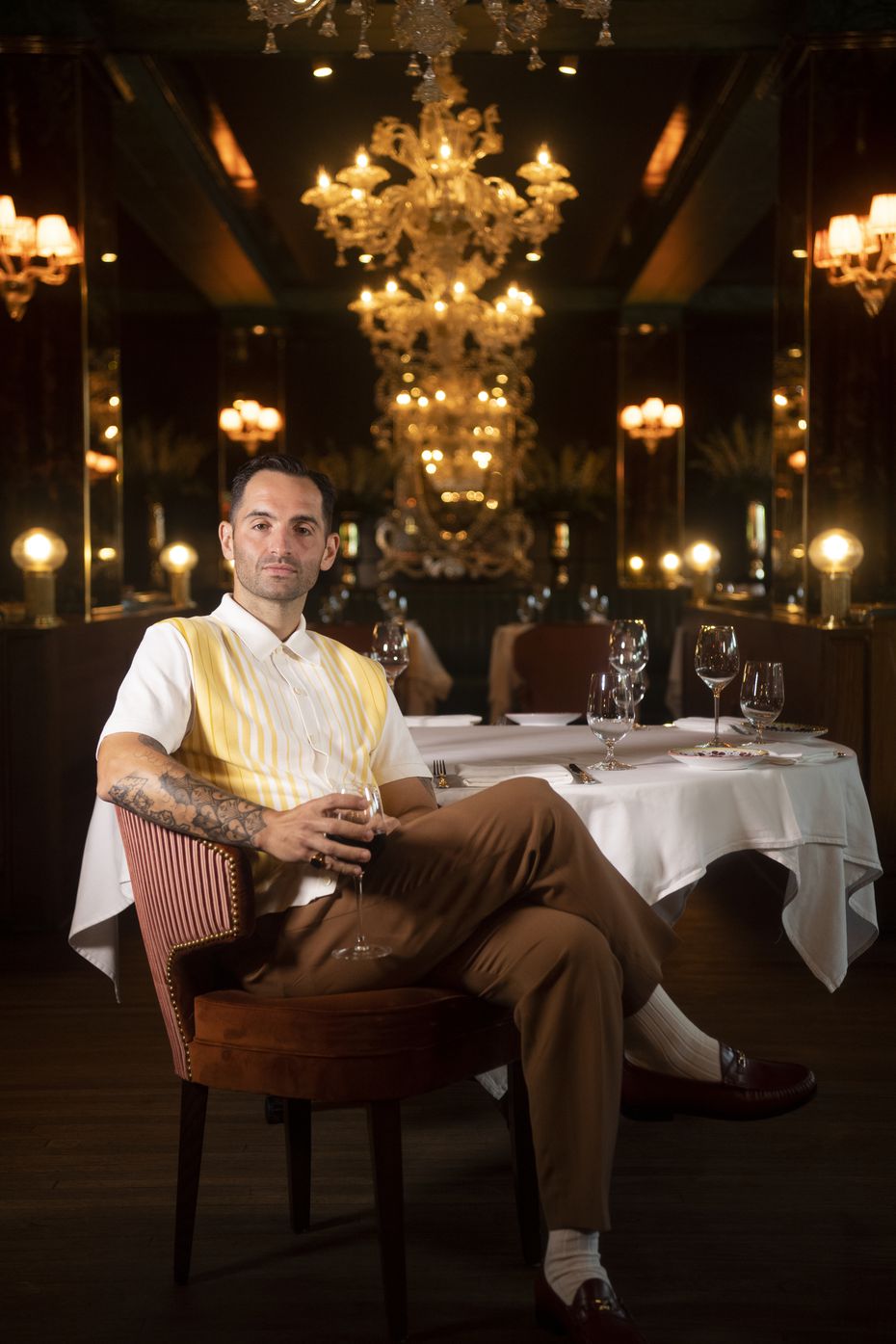 The most anticipated restaurant this year — maybe in the past several years — officially opens Thursday, March 31, 2022. And sitting in a coveted seat at this Italian restaurant will surely feel like a show.

Chef Mario Carbone is the namesake behind Carbone, an upscale Italian restaurant that started in New York and now expanded to Dallas in 2022.

The restaurant is named for co-founder Mario Carbone, who says the servers are primed and ready to give Dallasites a dramatically fabulous evening with shared plates like calamari and octopus pizzaioli; tableside Caesar salad; shrimp scampi and whole branzino; veal marsala and double lamb chops; and pasta, pasta, pasta.

“The idea is that it’s all done in sort of an exaggerated manner, so you can’t help but notice it,” Carbone says about the style of service. “It’s all a bit over the top.”

The restaurant entrance, formerly Sassetta in the Dallas Design District, is draped in striped fabric at the front. An elegant covered patio has banquettes and standalone tables, and the breeze in there makes a glass of cold white wine or a Negroni sound just right.

Inside, the dining room hums with calculated exuberance. The walls, now dark wood, are studded with gold crown molding. The bar is bathed in the restaurant’s signature navy color. Even the restrooms are bold, with green or pink granite, floor to ceiling. 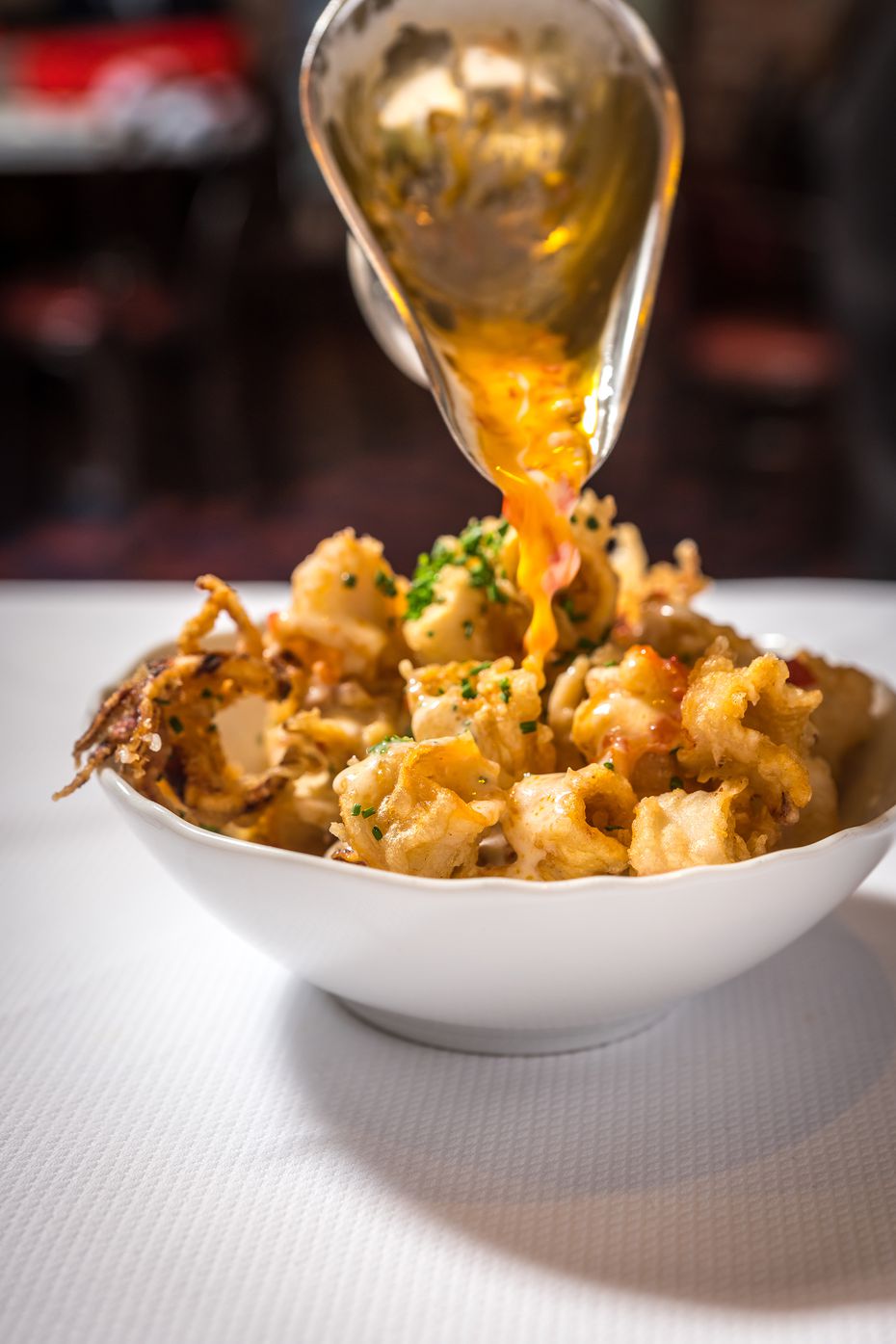 Calamari Marco is named after Mario Carbone's mentor, chef Mark Ladner. It's one of the dishes that feels personal for chef Carbone.

The idea for this dinner theater started in Carbone’s home town, New York City, in 2013. He grew up in Queens with grandparents who were “extraordinary” cooks, as he recalls it. After culinary school, Carbone was turned down for a job at Daniel Boulud’s restaurant Daniel but snagged a spot at Cafe Boulud, working next to David Chang and Rich Torrisi. Chang now owns a string of Asian restaurants on both coasts; Torrisi is a co-founder with Carbone at Major Food Group. They collectively operate 30 restaurants around the world alongside co-founder Jeff Zalaznick.

Carbone was created to preserve the idea of the Italian-American restaurant precisely from the year 1958.

“This is a functioning museum,” Carbone says, gesturing to the restaurant around him. “The whole experience is not to create something new. It’s to preserve something old.”

The dishes and recipes, therefore, had to have been food someone might have eaten in 1958. The songs playing in the room can’t have been created after that date, and the decor needs to look like it could have come from that era.

Carbone’s mom, Maria Carbone, would like you to think that the meatballs were her recipe, but her son says that isn’t quite it: His team uses a different recipe. And customers all over the world — at Carbones in New York, Hong Kong, Las Vegas and Miami — order them like crazy. 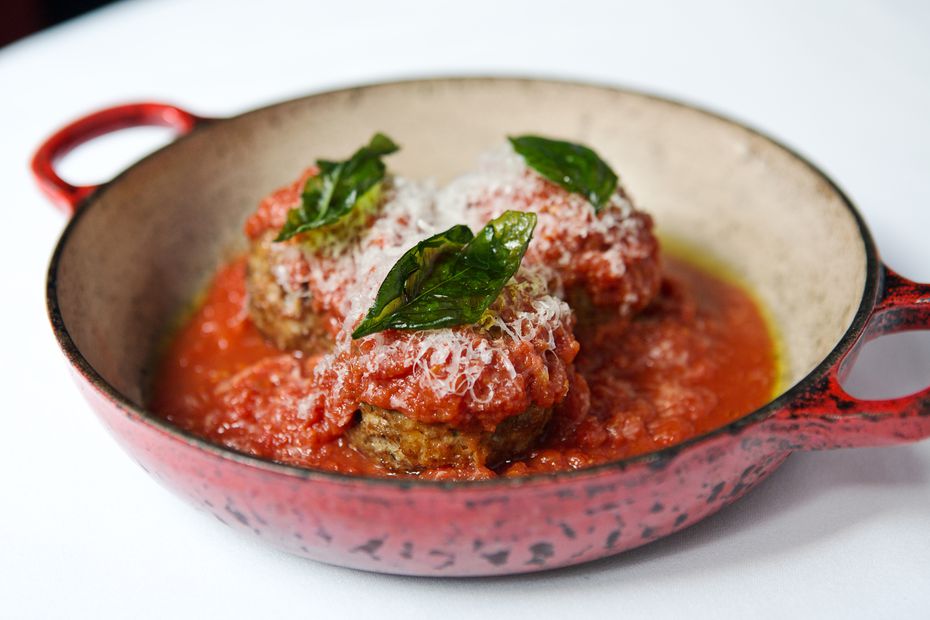 Carbone's meatballs are one of the most popular items, says the chef.

“Hers are also great,” Carbone says. To be clear.

That Major Food Group chose Dallas as its next hot spot — not only for Carbone but also for sibling restaurant Sadelle’s — is a significant “get” for folks like Dallas developer Stephen Summers. He talked to them for more than eight years before the deal was done.

“I’ve been trying to get Major Food Group to Dallas for a very, very long time. I’m just thrilled that it’s finally all coming to fruition,” Summers says.

Carbone is not to be confused with Carbone’s, another Dallas Italian restaurant. Carbone’s is owned by Dallas restaurant owner Julian Barsotti and has no affiliation with Carbone.

Carbone will naturally be a big-spender spot, where Caesar salad costs $25 and the famous spicy rigatoni vodka pasta is $33. The bass Alison, named for Zalaznick’s wife, Ali Zalaznick, costs $48 (and, note, it’s one of the healthier options on the menu). Veal parmesan is $69. 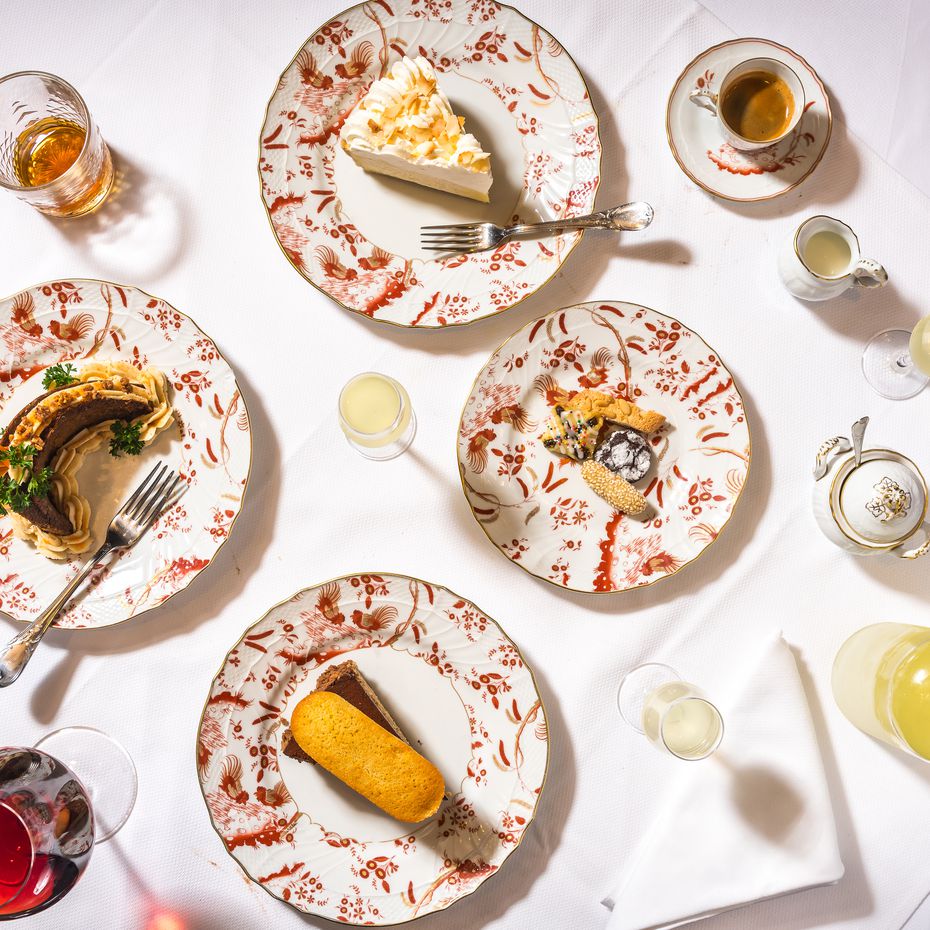 After dinner and drinks, dessert is a requisite part of the experience at Carbone in Dallas, says co-managing partner Mario Carbone. He would know: He has a sweet tooth.

If guests stay a while, servers will keep bringing them treats. A gift table is filled with candies, fruit and torrone, an Italian nougat dessert brought all the way from Ferrera Bakery and Cafe in New York. The after-dessert service was Carbone’s service director Ricky Tinneli’s idea; he’s a well-known name in New York City for his hospitality.

Despite all the glitz, Carbone says there’s soul here, captured from the tables where their Italian families dined. You’re done with dessert and coffee? There might be more food coming.

“It’s like being at your grandma’s house,” Carbone says. “We just keep feeding you.”

Carbone is at 1617 Hi Line Drive, Dallas. It opens Thursday, March 31, 2022. Reservations can be made via Resy — and you’ll want to make them several weeks in advance, or more.