A relief ceiling depicting a labyrinth of ancient ruins extends above the diners in this restaurant in Guadalajara, Mexico, which has been designed by local studio Monteon Arquitectos Asociados.

Monteon Arquitectos Asociados was inspired to create the ceiling after seeing a photo of Casas Grandes, otherwise known as Paquimé – an archeological site located in Chihuahua, northern Mexico, which contains the architectural ruins of a major pre-Columbian settlement.

Built from the 11th century onwards, its inhabitants lived in complex, multi-storey homes that were crafted from adobe clay. 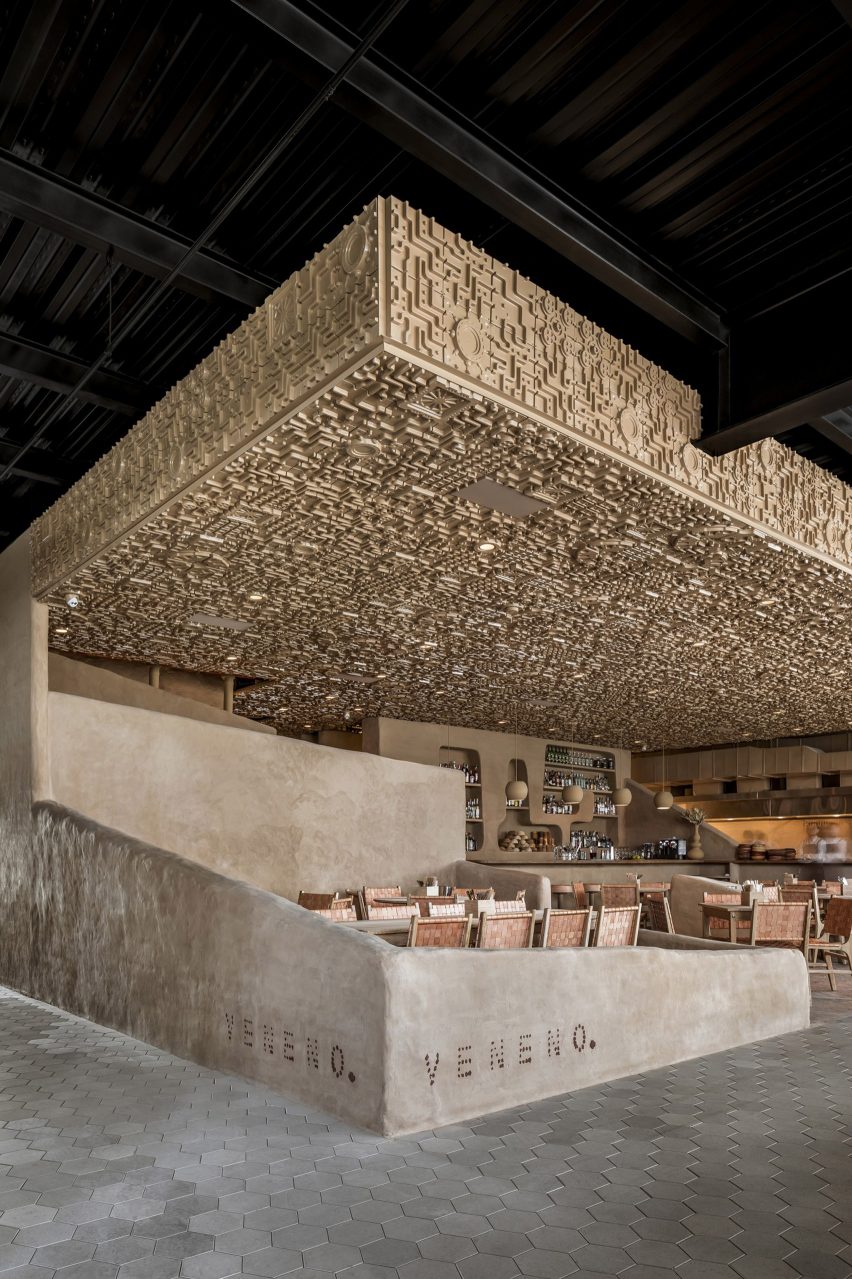 Tracings were taken from the image of Casas Grandes' site and then, using thermoforming, replicated on nine panels of recycled polystyrene. These were then painted with a water-based enamel and arranged on the ceiling to form a largely random pattern.

Parts of the panels have been adapted to incorporate spotlights or hide service ducts that lie underneath. 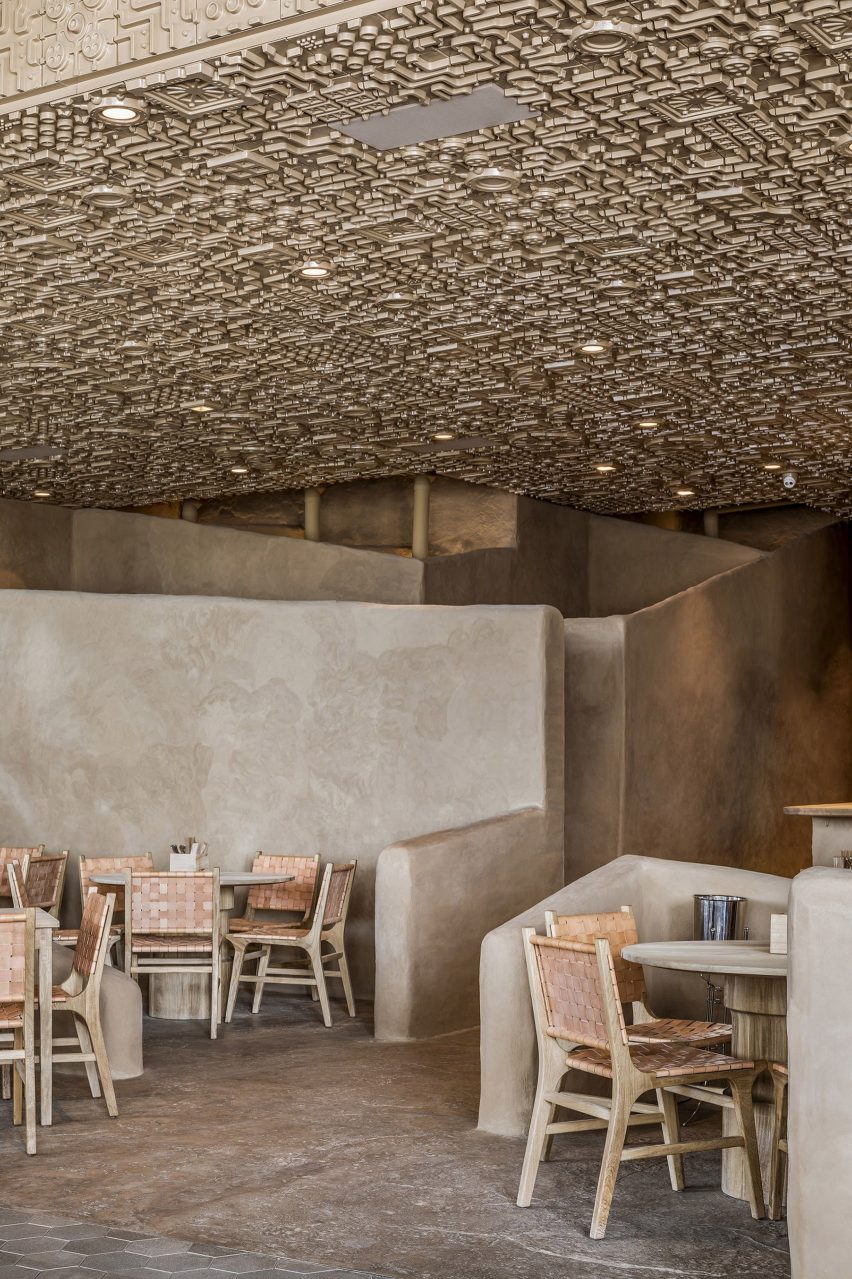 In a nod to the earthen homes that once populated Casas Grandas, the rest of the restaurant has been made to look as if it's "carved from the ground". All the walls have been washed with a sandy-hued plaster, which was made bespoke for the restaurant.

"Performance tests were made with different ratios of aggregates to achieve a balance of colour, texture, hardness and resistance to cracking," the practice explained.

The same plaster has been applied to low-lying partitions that separate groups of seating within the restaurant. Each partition has been finished with sloping edges to give the effect that it is gradually eroding away. 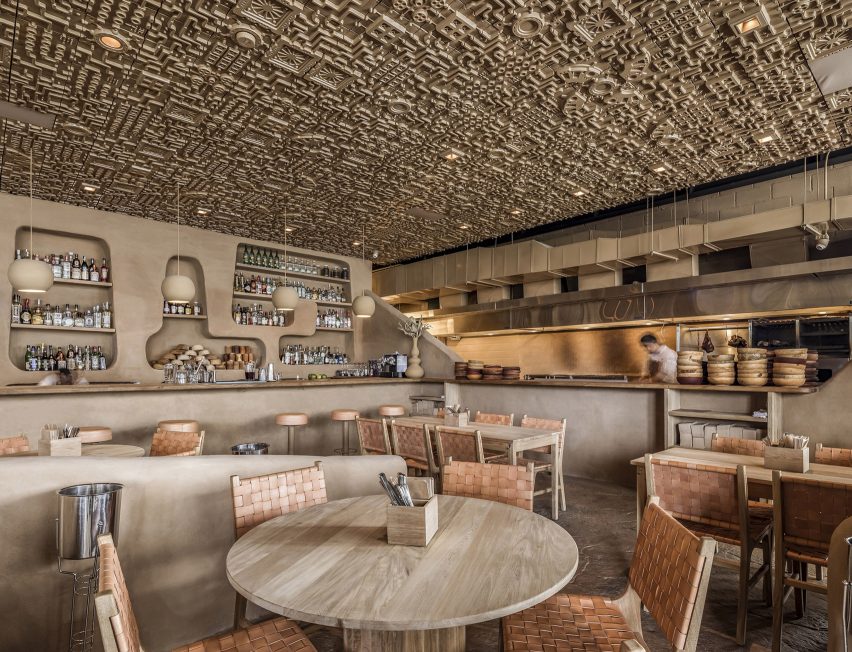 Dining tables have been made from light timber and paired with chairs that boast woven backrests made from peachy leather.

Clay vases from Tlaquepaque – a region of Mexico esteemed for its pottery – have also been dotted throughout as decoration. 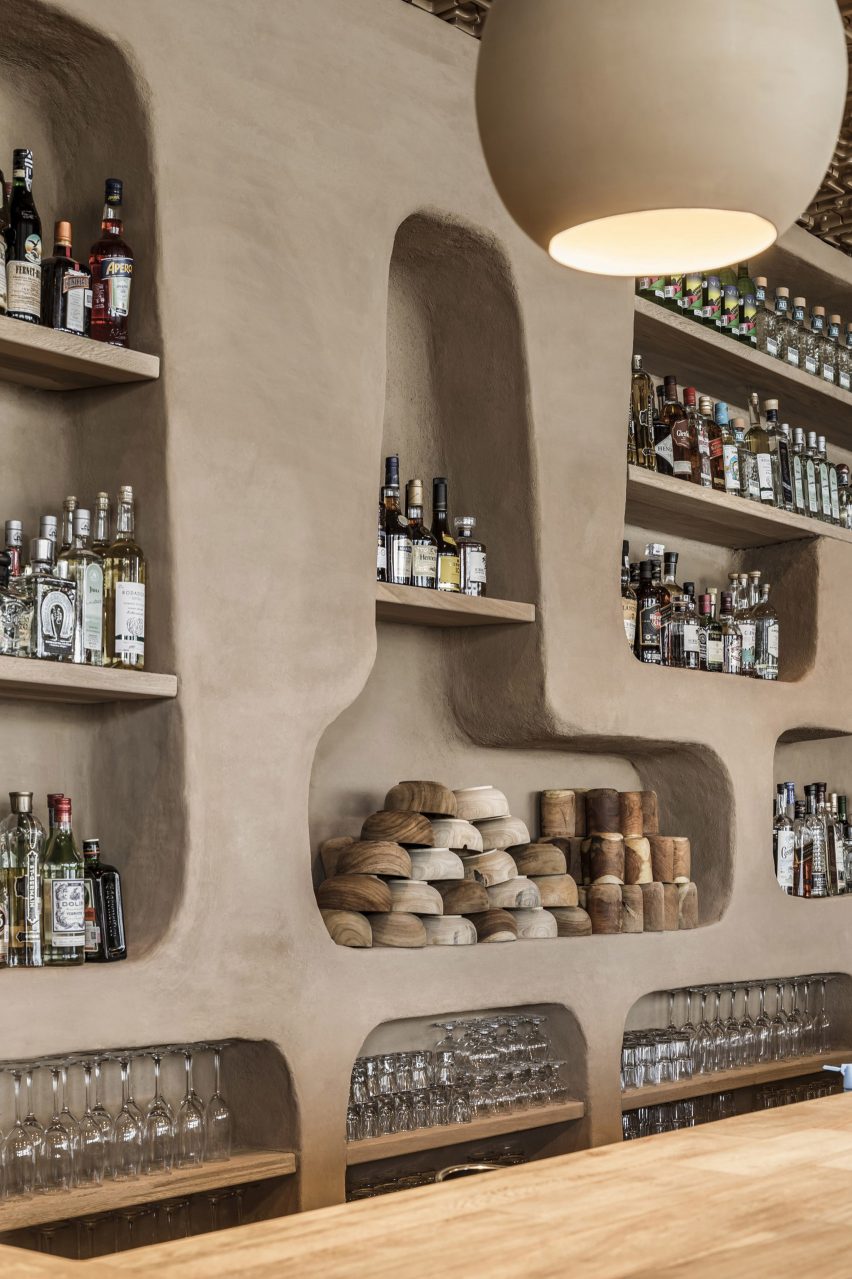 Veneno's cocktail bar is situated at the rear of the room, where a wall has been punctuated with organically-shaped alcoves to display liquor bottles and hand-carved tableware. 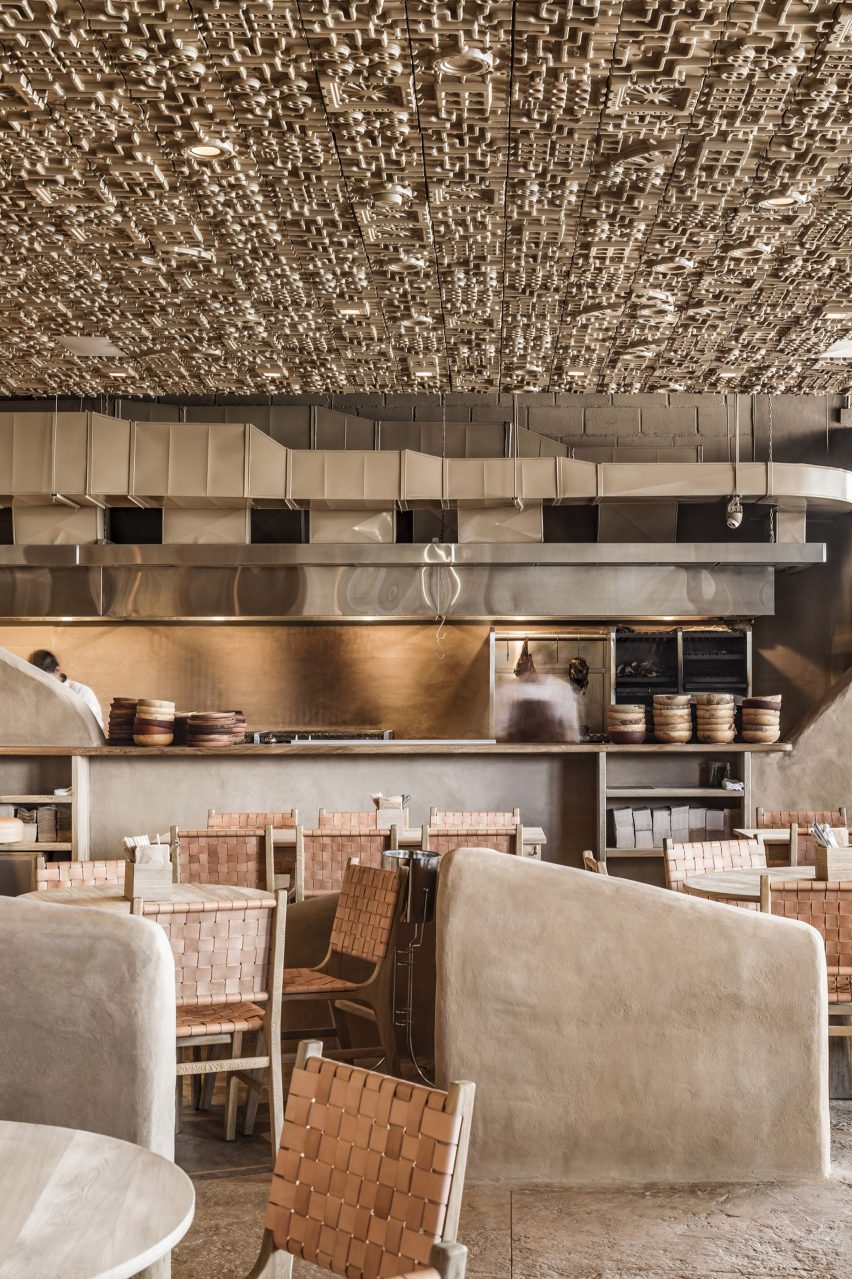 To the right side of the floor plan is the kitchen, which the practice purposefully left open to create a bustling hub of activity within the restaurant.

Thermoformed panels like those that feature on Veneno's ceiling have also been mounted on the walls of the bathrooms, which have been finished with timber washbasins and wriggly-edged mirrors. 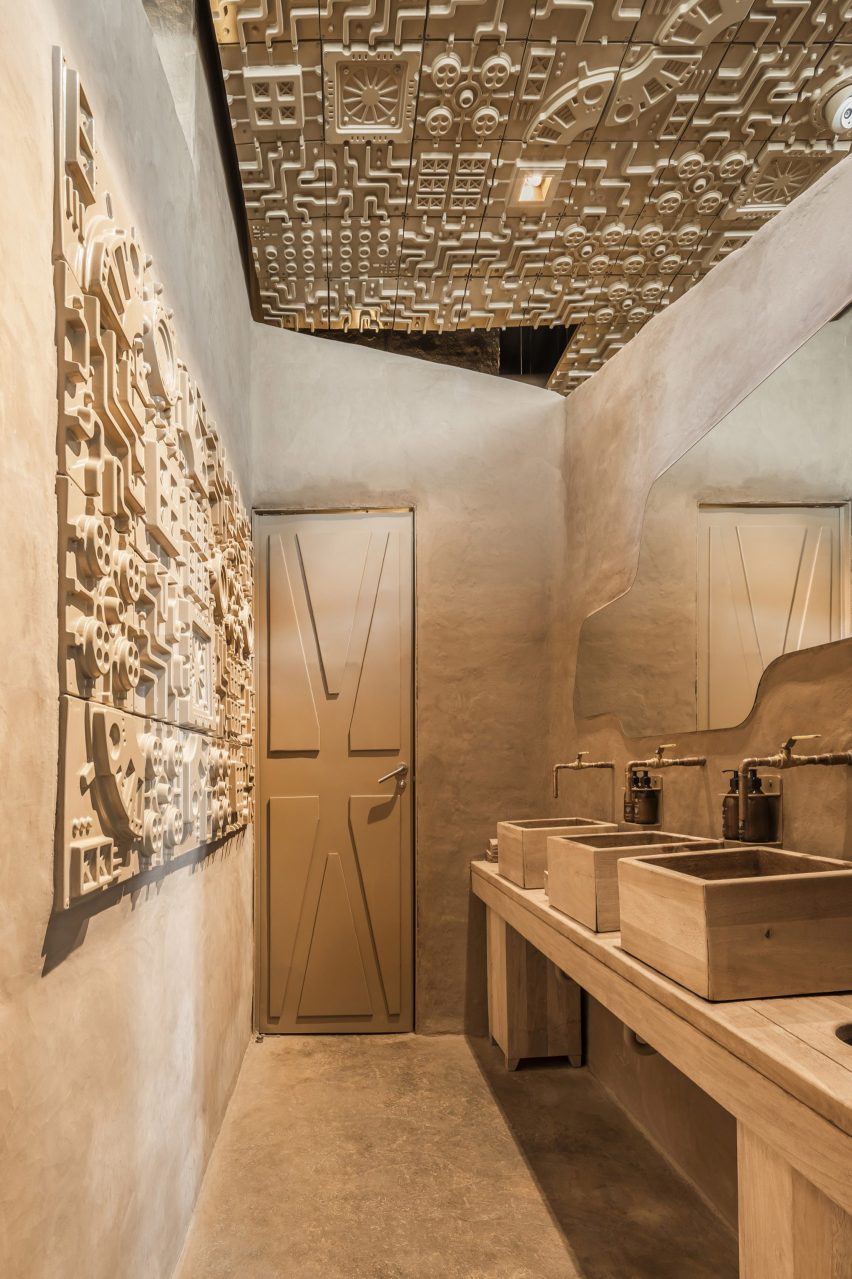 Monteon Arquitectos Asociados' Veneno is shortlisted in the restaurant and bar interior category of this year's Dezeen Awards.

It will contend against four other projects – among them is Kink, a dining spot in Berlin that features a red neon light installation, and Istetyka, an eatery in Kyiv that boasts a tactile mix of clay and concrete surfaces.

Photography is by Cesar Béjar Studio.