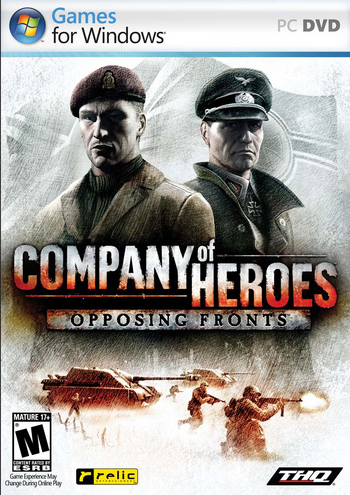 Company of Heroes: Opposing Fronts (abbreviated CoH:OF) is the stand alone expansion pack to Company of Heroes, a RTS game for computers running the Windows operating system. It was announced on April 5, 2007. Opposing Fronts was developed by Canadian-based RTS developer Relic Entertainment, and published by THQ. The game was released on September 25, 2007 in the US and September 28 in Europe.

Opposing Fronts implements a Dynamic Weather Effects system consisting of real time weather effects and day-to-night time transitions. In addition to these enhancements, particular birds sing at various times of the day and during specific weather patterns. Although Relic had initially indicated otherwise, the Dynamic Weather Effects system has no tactical impact on the battlefield.

Opposing Fronts introduces two new single player campaigns. The campaigns feature gameplay from the British perspective and the German perspective. The British campaign is based on the Liberation of Caen. It features nine missions focusing on the attack by British and Canadian forces from Sword, Gold, and Juno Beaches to the city of Caen. The German panzer Elite's campaign is based on driving back Allied forces during Operation Market Garden. It features eight playable missions following a Panzer Elite Kampfgruppe in occupied Netherlands that is bracing itself for one of the largest airborne invasions in history.

The campaign starts off with the 3rd Battalion (aka Boudica's Boys), as they advance along a road towards the town of Authie. They are ambushed by the German II SS Panzer Korps forcing the battalion commanders, Major Blackmore and Captain Cutting, to pull the battalion back. After taking out the attacking force, the battalion bombards the town, taking it after dealing with the remaining German forces.

In Operation Epsom, British forces remobilize to take Caen, after the failed D-Day attack. The 3rd Battalion and the Royal Scottish Engineers Regiment are tasked with taking the bridges over the Odon and taking Hill 112. Under the cover of a creeping barrage, they take the hill, and the Royal Scots stay behind to fortify.

In Operation Windsor, the airfield at Carpiquet was the next objective of 3rd Battalion. Under the cover of night, a Royal Commandos regiment lands outside the airfield while Royal Canadian Rifles assault with light tanks and infantry, as it is bombarded by the Royal Scots Engineers. The commandos destroy German H.Q.s in

In Operation Goodwood, with Caen in Allied hands, 3rd Battalion mobilizes south of Caen. It arrives at Bourgebus with B Company, and after destroying Flak 88s looking over their line of advance, destroys the remnants of the I SS Panzer Korps. 3rd Battalion, having done the British Army a great favour, are allowed to rest as 2nd Battalion continues the advance.

The campaign ends with the caption that after the war, Major Blackmore retired, dying in 1983.

The campaign begins with Kampfgruppe Lehr training in Wolfheze, only to be interrupted as Allied paratroopers descend from the skies. The kampfgruppe use whatever men and forces they have to repel the invasion. After the attack, the kampfgruppe commanders Major General Voss, and Berger brothers Aldrich and Wolfgang, find plans for the entire operation in a British glider.

As part of the 'Market' phase, the British 1st Airborne Division attempts to capture bridges across the Rhine in Oosterbeek and Arnhem. Kampfgruppe Lehr is tasked with intercepting the British paratroopers before they reach Arnhem by destroying the bridge at Oosterbeek and defending against an Allied attack.

After successfully thwarting the British 30th Corps at Valkenswaard and at Best, Kampfgruppe Lehr needs to remove all enemy forces inside the Netherlands. First, they move to secure Arnhem and recapture the bridge, the last bridge that the Allies need in order to start pouring into Germany.

Having routed the 6th Airborne in Arnhem, the kampfgruppe recaptures Valkenswaard from the British 30th Corps, and finally remove the last paratroopers from Oosterbeek in the campaign's final mission. Of the two brothers, Aldrich dies in the battle, determined by how the mission is played. Aldrich is placed with a random infantry squad or vehicle and if that unit dies, a soldier will tell the player that Aldrich has been killed, or revealed dead in the ending cutscene with his older brother acquiring his belief that the war is over and his

Opposing Fronts requires customers to create an online account for multiplayer. In an effort by Relic to counter piracy, the game requests account authentication if Internet access is detected. Otherwise, a standard DVD check is used.