I was searching for excellence in New York City, so I thought, why not shoot for the top with Eleven Madison Park, a restaurant with three Michelin stars rated the best in North America.

Living in Latin America during my thirties introduced me to tasting menus and a few of the world's best restaurants.

In 2014, I became curious about how those meals in Medellin, Lima, and Mexico City would stack up to a fine dining restaurant in New York City. 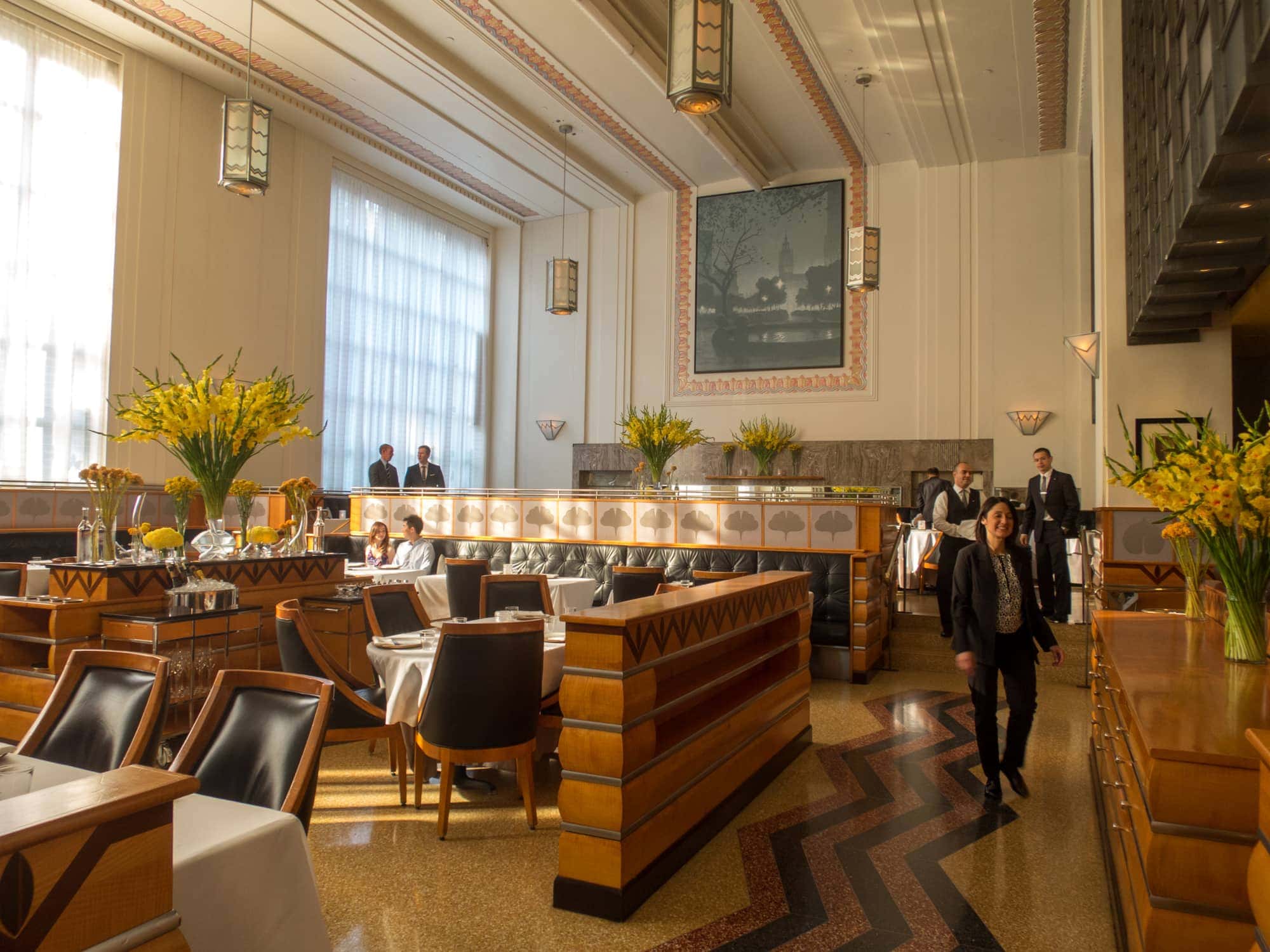 Three years later, Eleven Madison Park was recognized as the best restaurant in the world.

Swiss executive chef Daniel Humm began working at Eleven Madison Park in 2006, and in 2017, he bought the restaurant with his business partner, Will Guidara.

This is the same duo behind the NoMad bar.

Chef Humm's menus use seasonal ingredients from local farmers in New York, and as you'll see, this sense of place was reflected in the meal.

My August 2014 trip coincided with my brother's birthday, so a few of our friends and I took him to celebrate.

I was very excited about the meal. Upon arrival, I realized I didn't bring a pen or paper with which to take notes.

Caleb, the sommelier, was kind enough to lend me his silver pen (upon which his name was engraved) and a piece of Eleven Madison Park notepaper.

I held onto these scribblings, knowing I wanted to write about the meal at some point, though not expecting it to take six years.

In choosing our menu for the night, we were presented with four themes, including strawberry, cherry, and coffee. I chose coffee, plus the wine pairing. 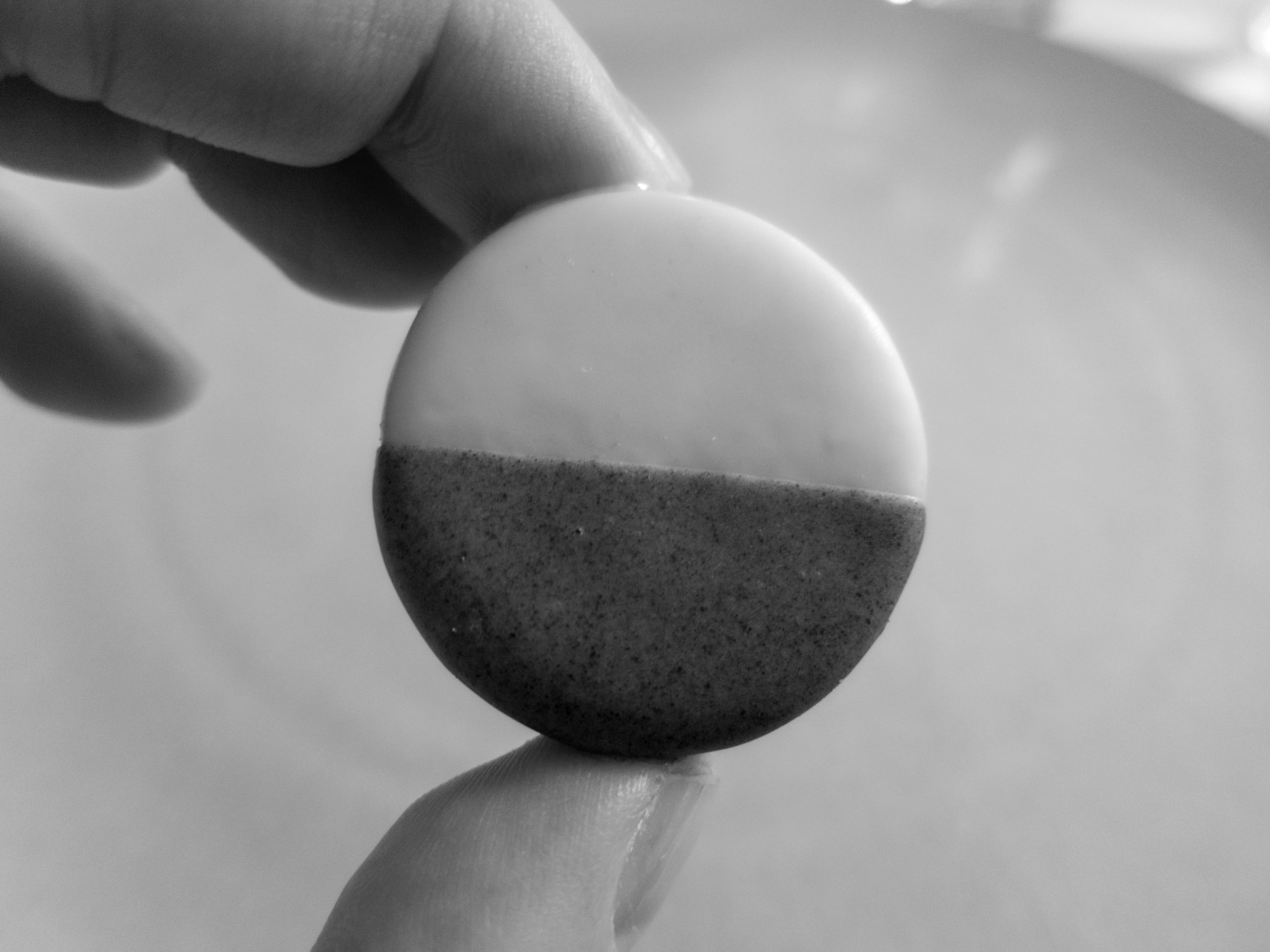 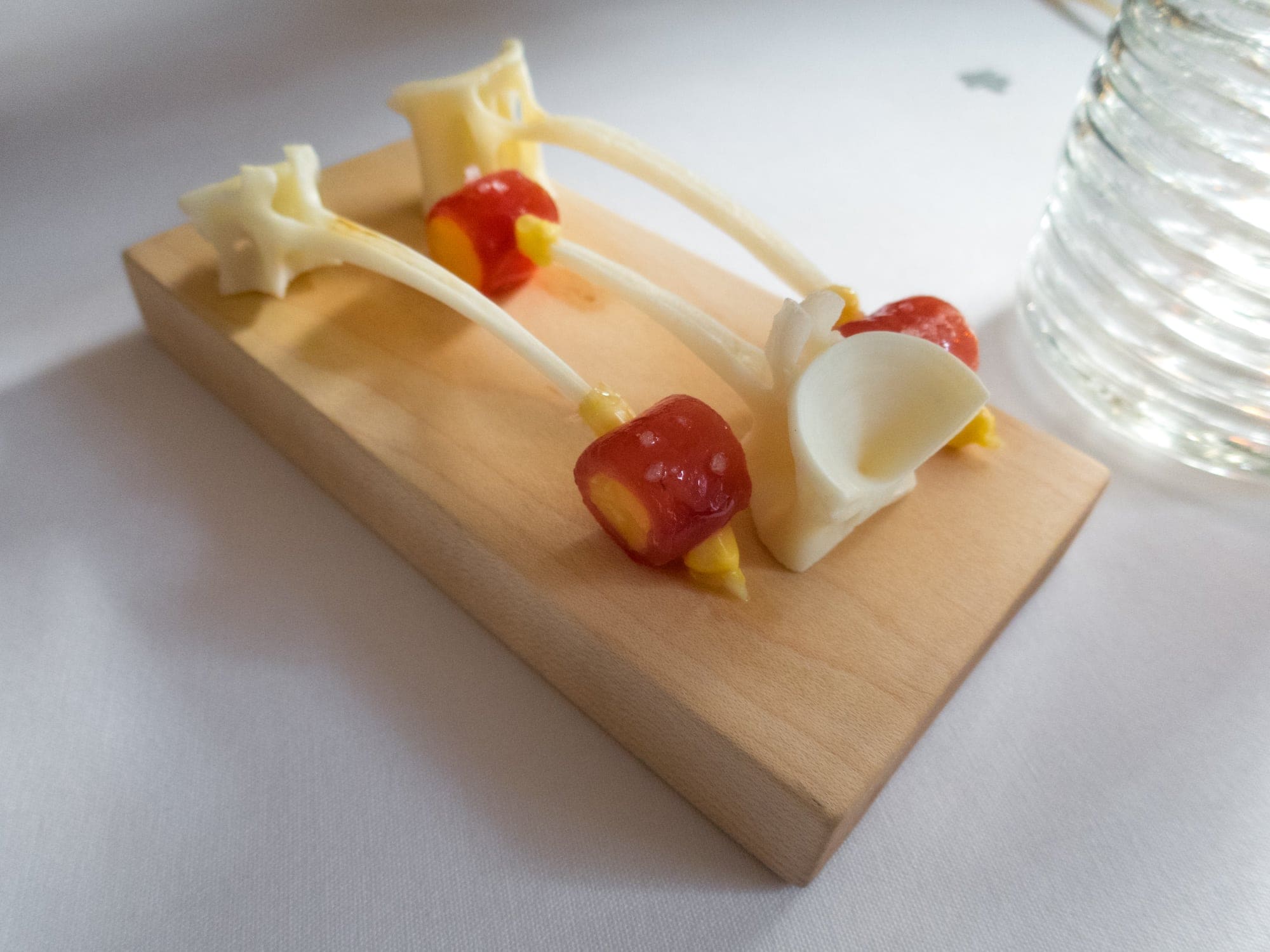 Snack served on a tuna bone 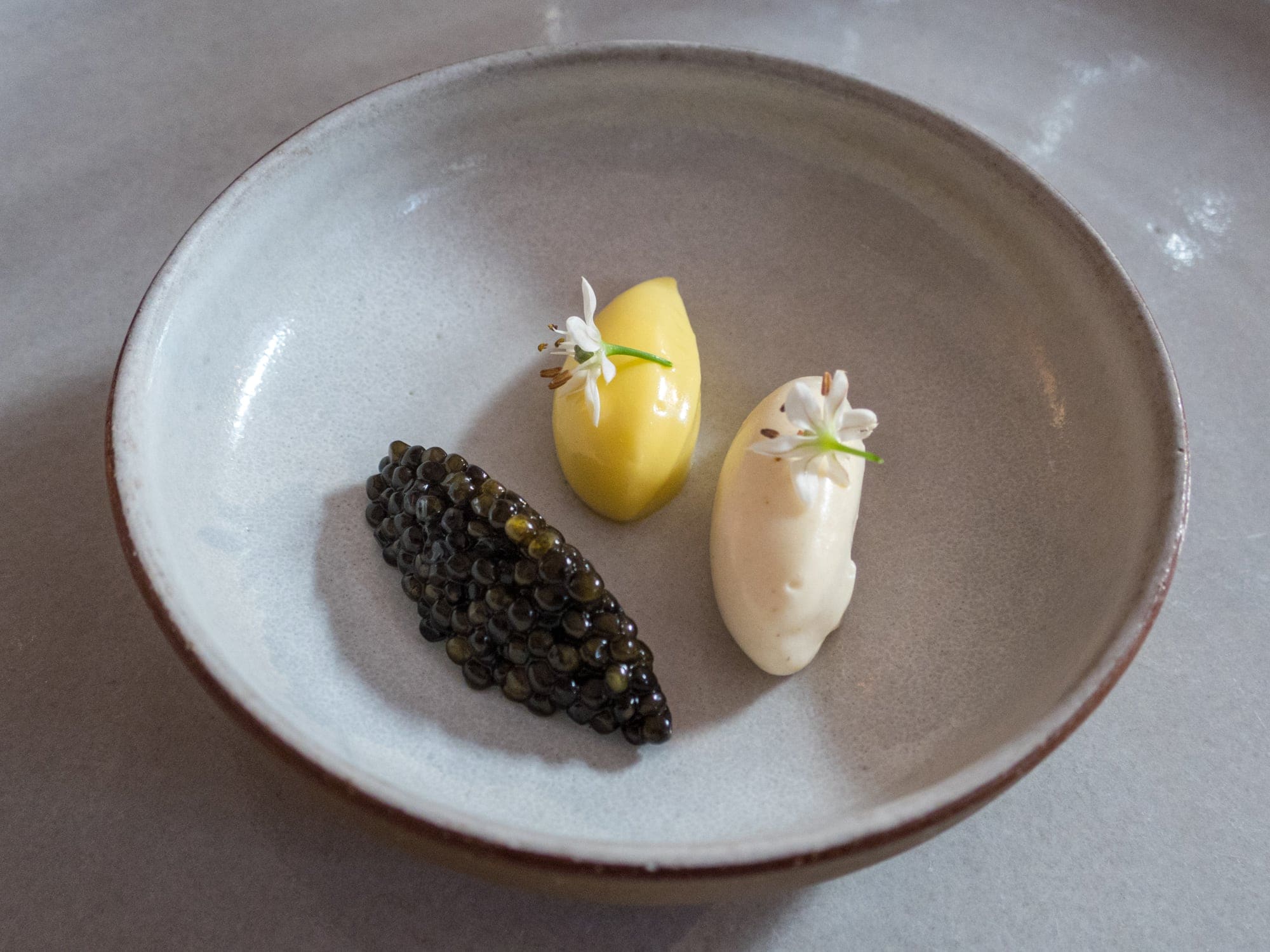 The caviar course was served with two sauces, both of which I liked.

The serving spoon was made of mother of pearl, which is not only an attractive material but an inert one that doesn't react with the caviar as metal would (thereby affecting its flavor). 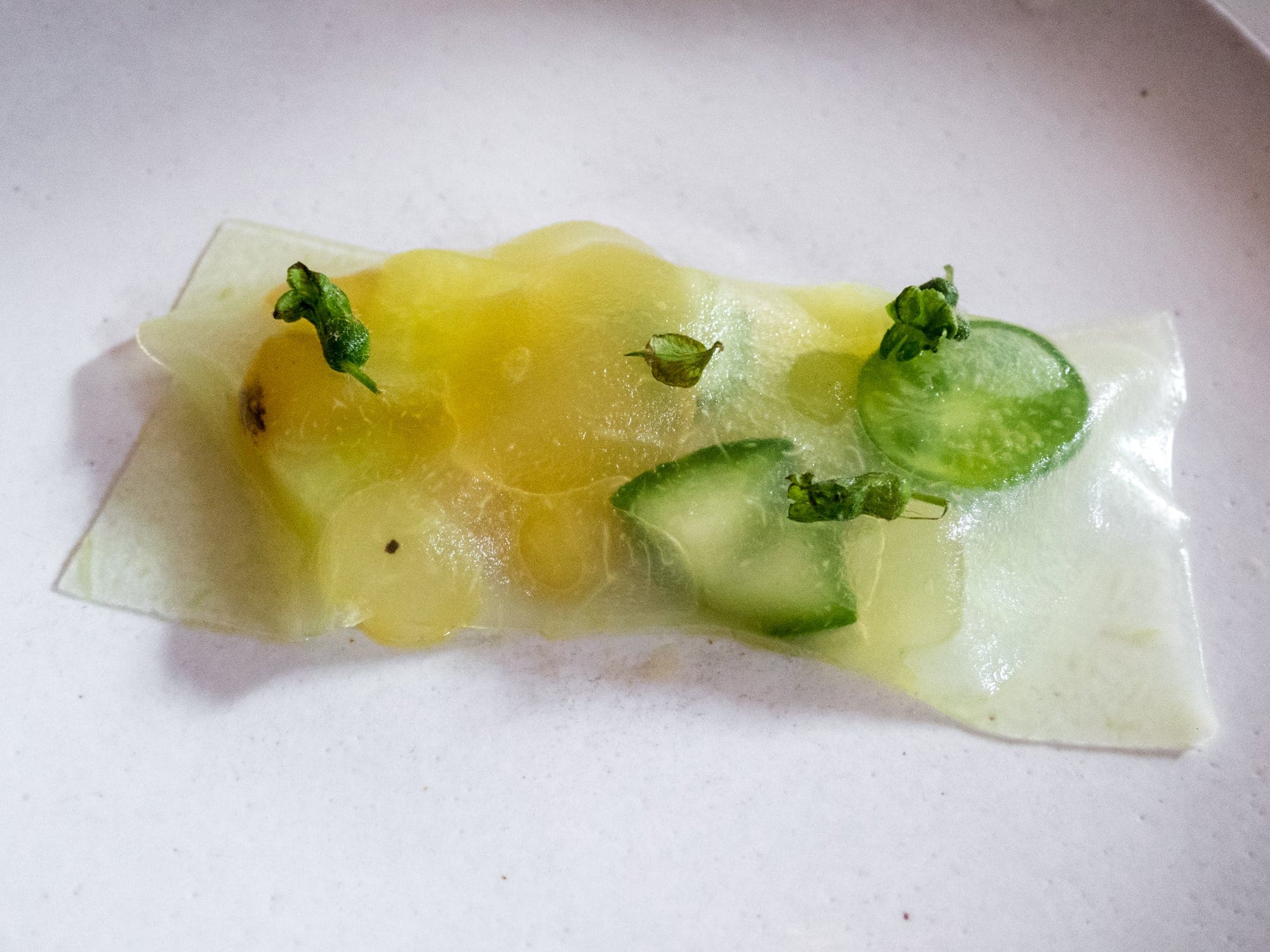 Cucumber marinated with lemon and melon.

After the cucumber course, we were served a tasty tea with lemon and thyme. 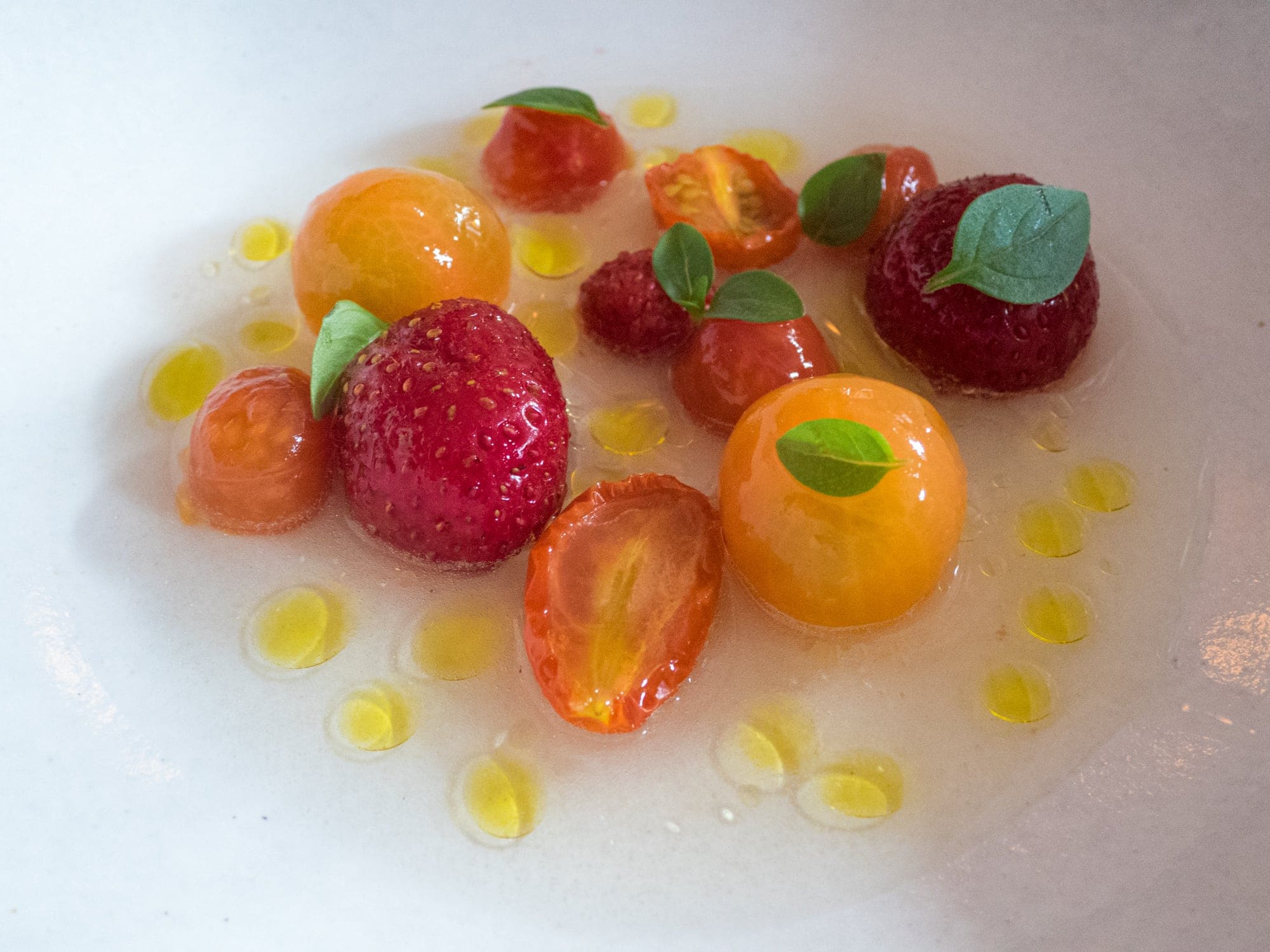 Tomato and strawberry with basil

The delicately arranged tomatoes and strawberries were one of the prettiest courses. 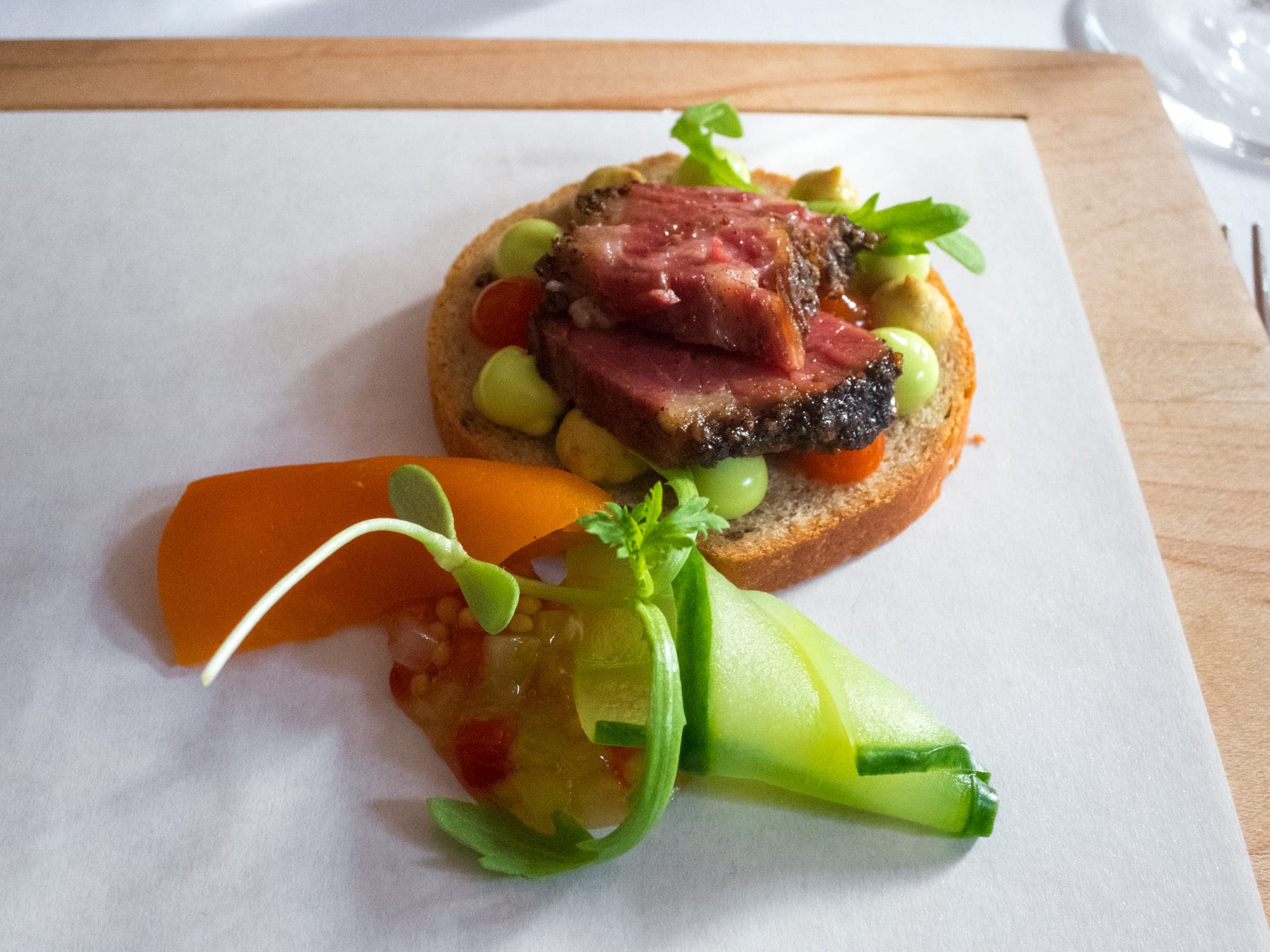 Pastrami with peppers and mustard on rye

My NYC deli course was served with a bottle of coffee-flavored soda. 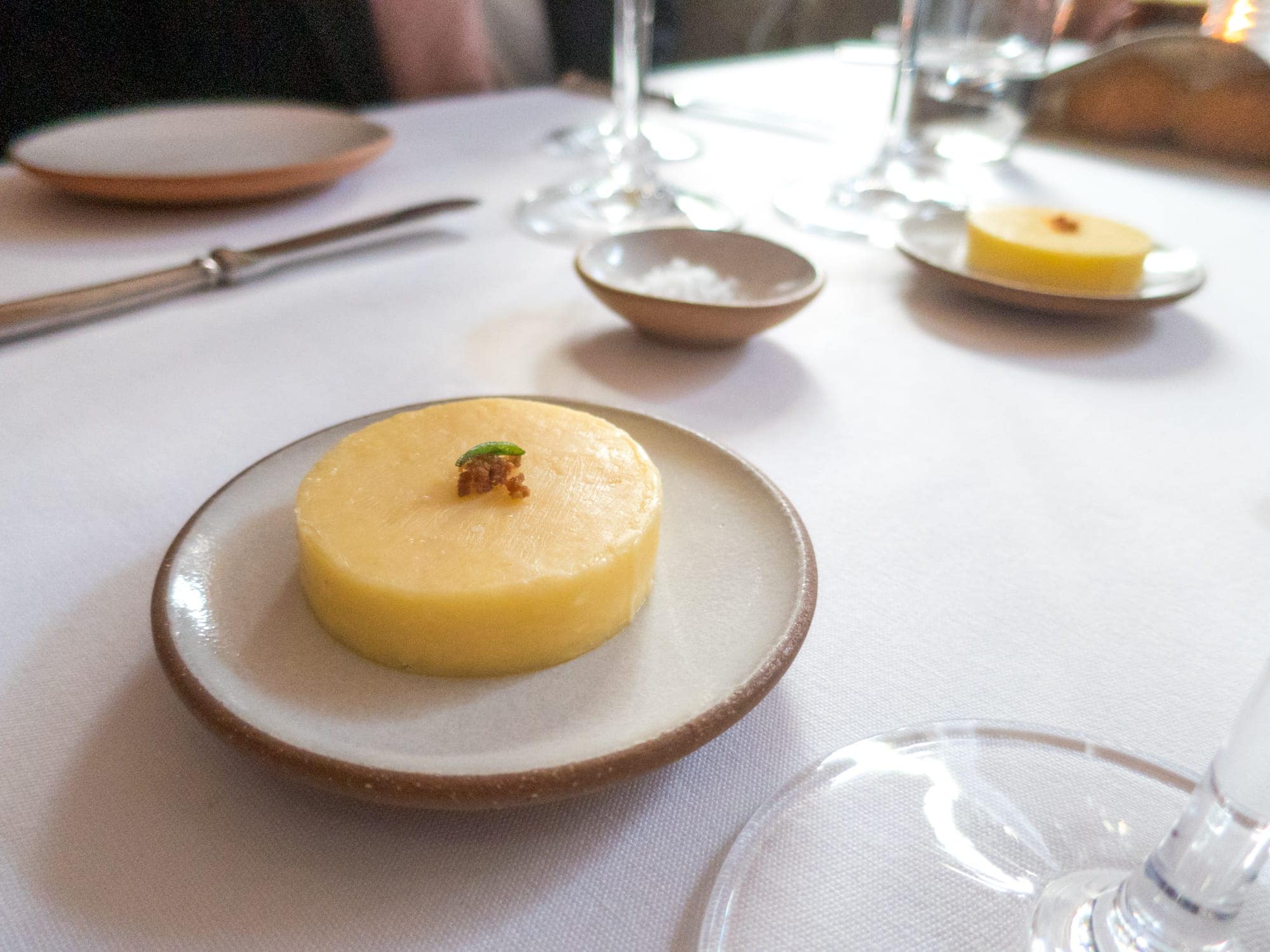 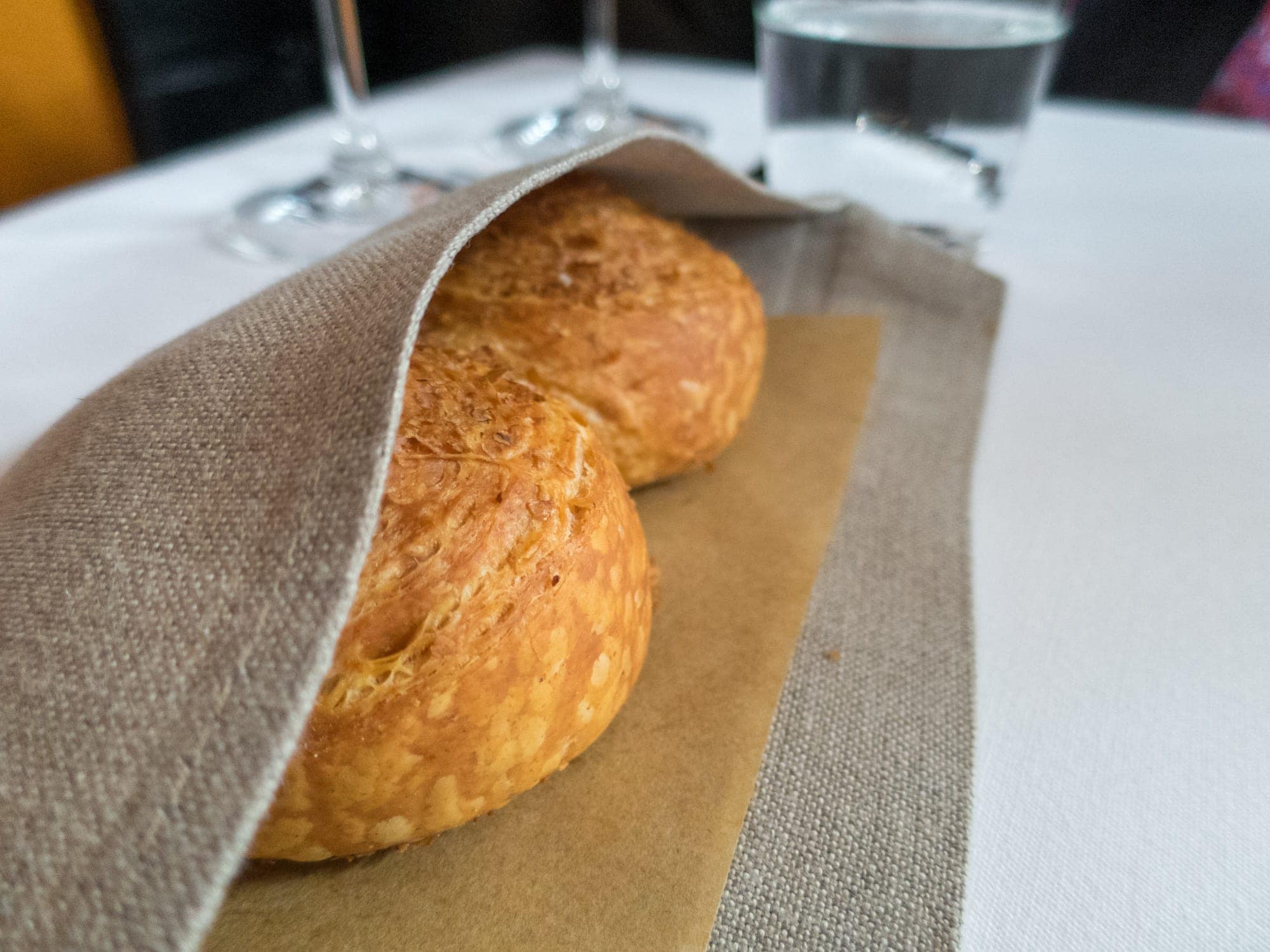 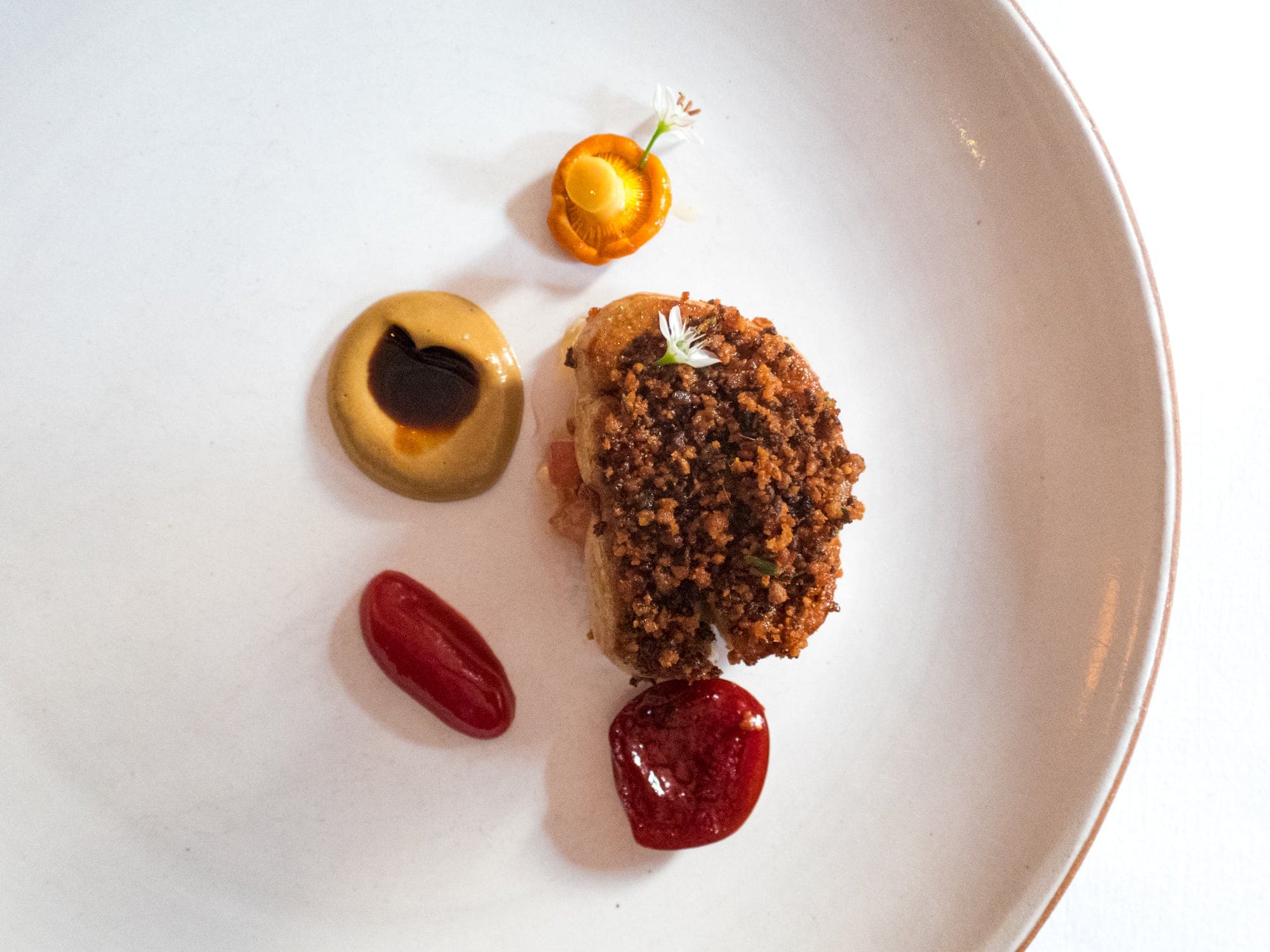 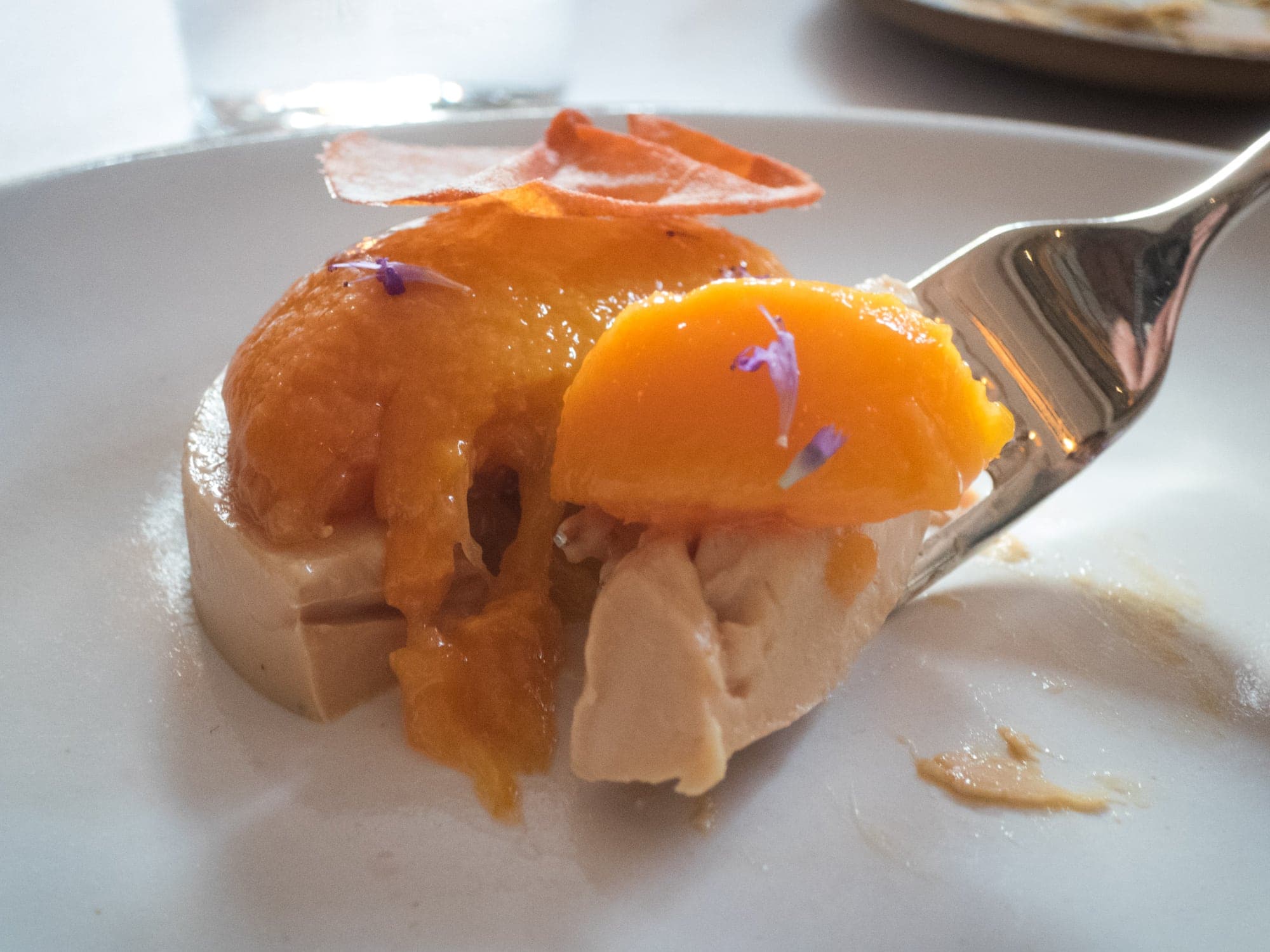 The foie gras was incredibly rich—the best I'd ever had. I think I say that every time. So good. 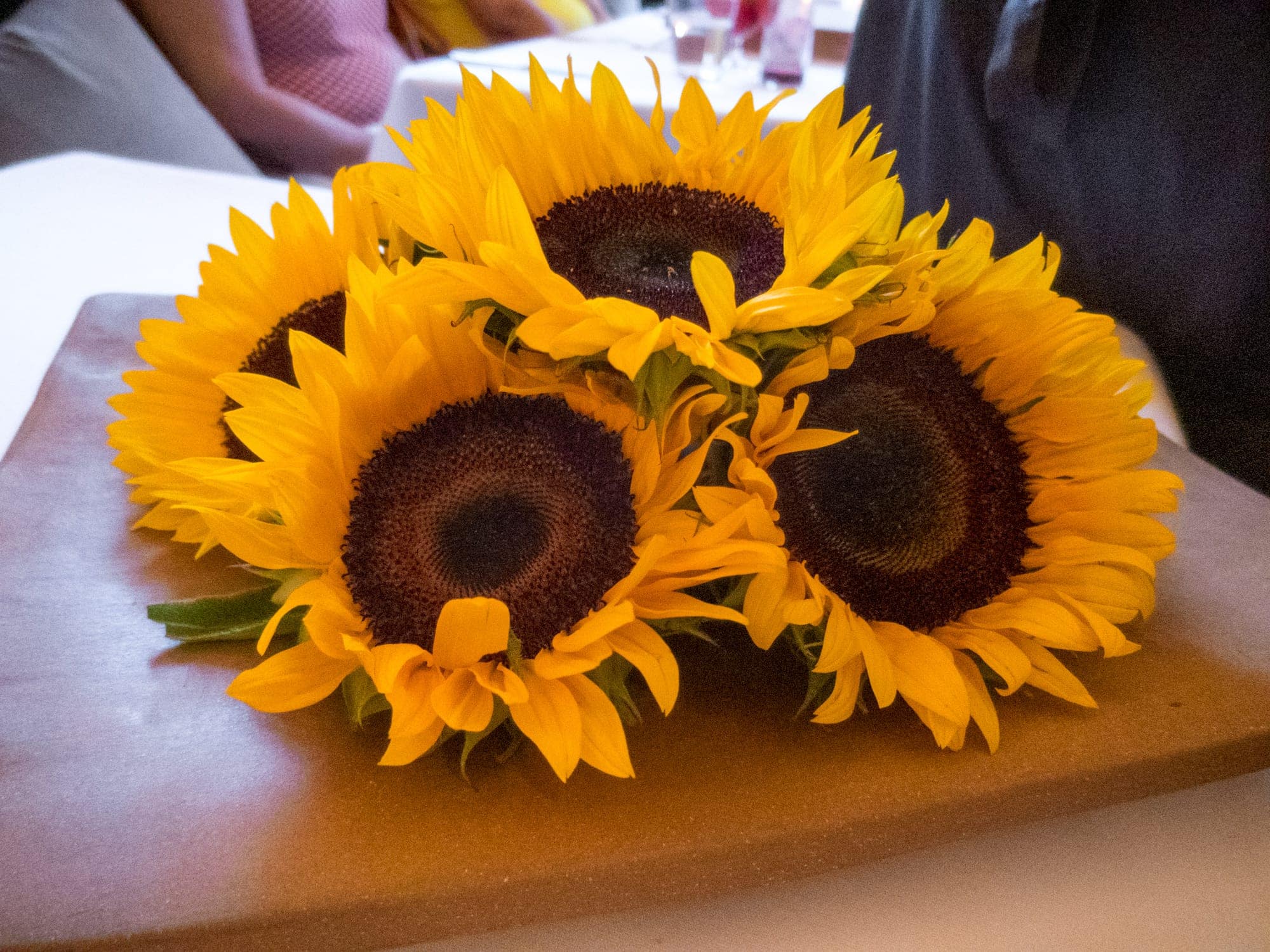 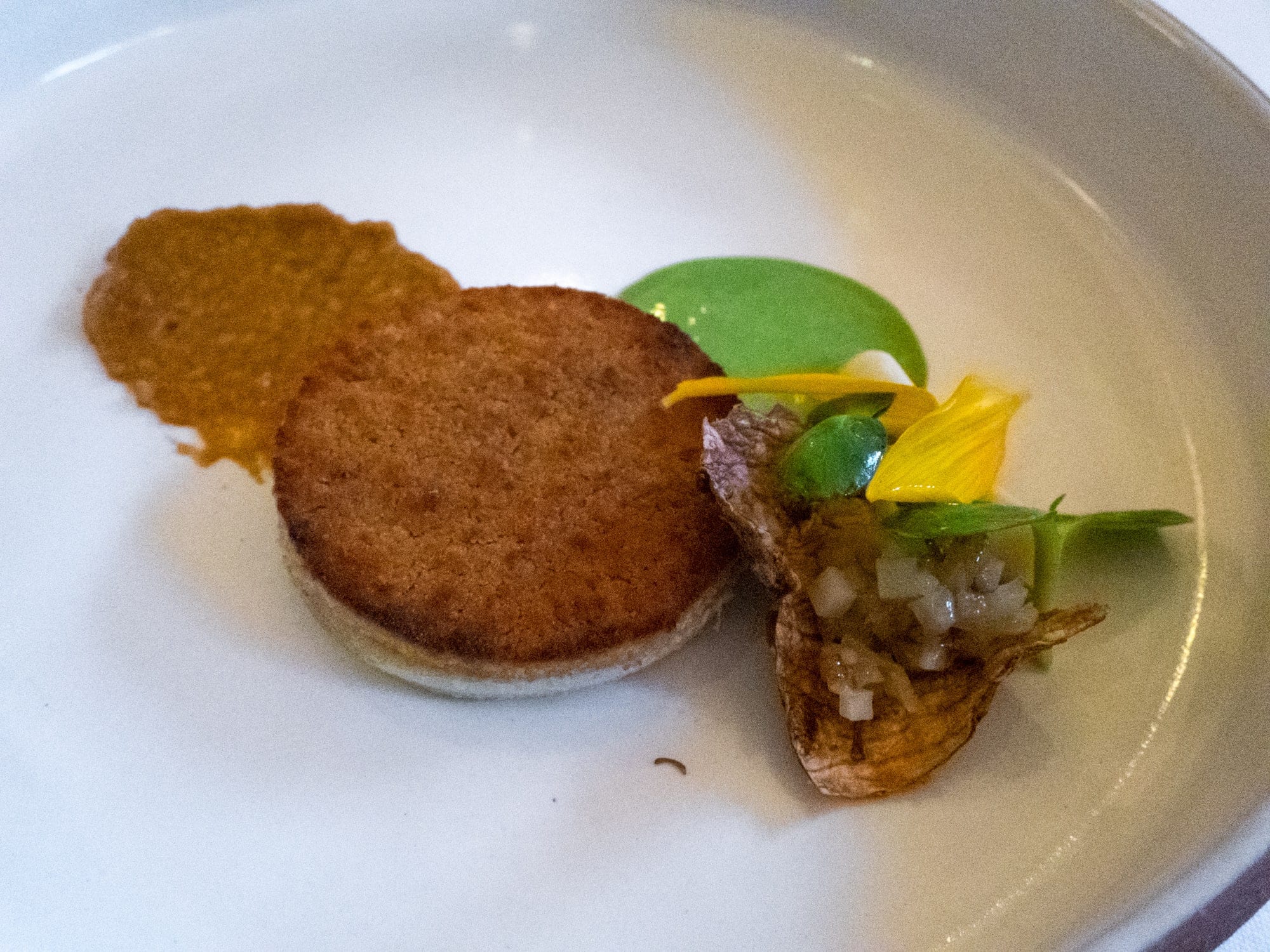 The sunflower was my least favorite dish of the meal thus far. 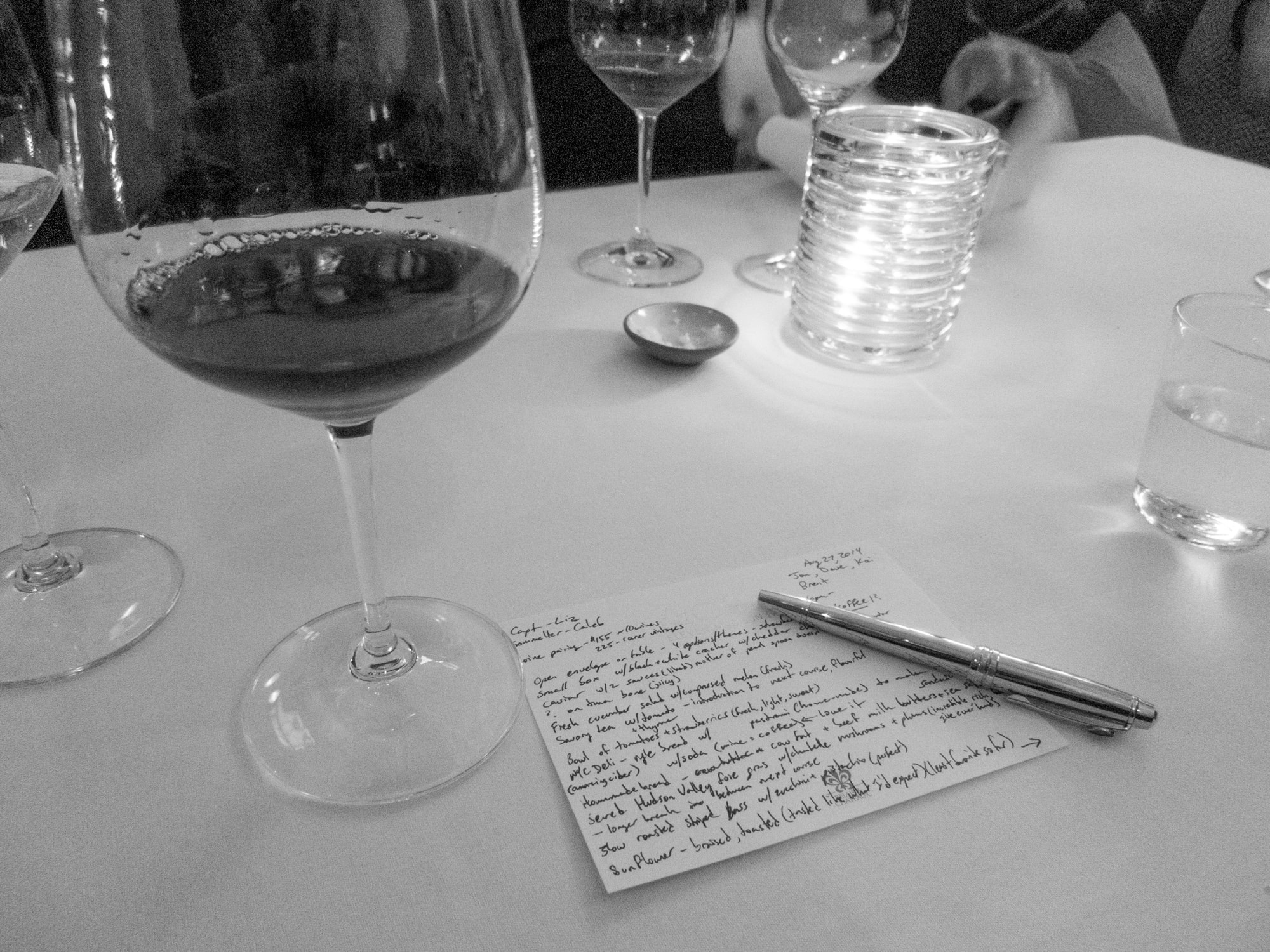 Taking notes with Caleb's pen as we switched to red wines 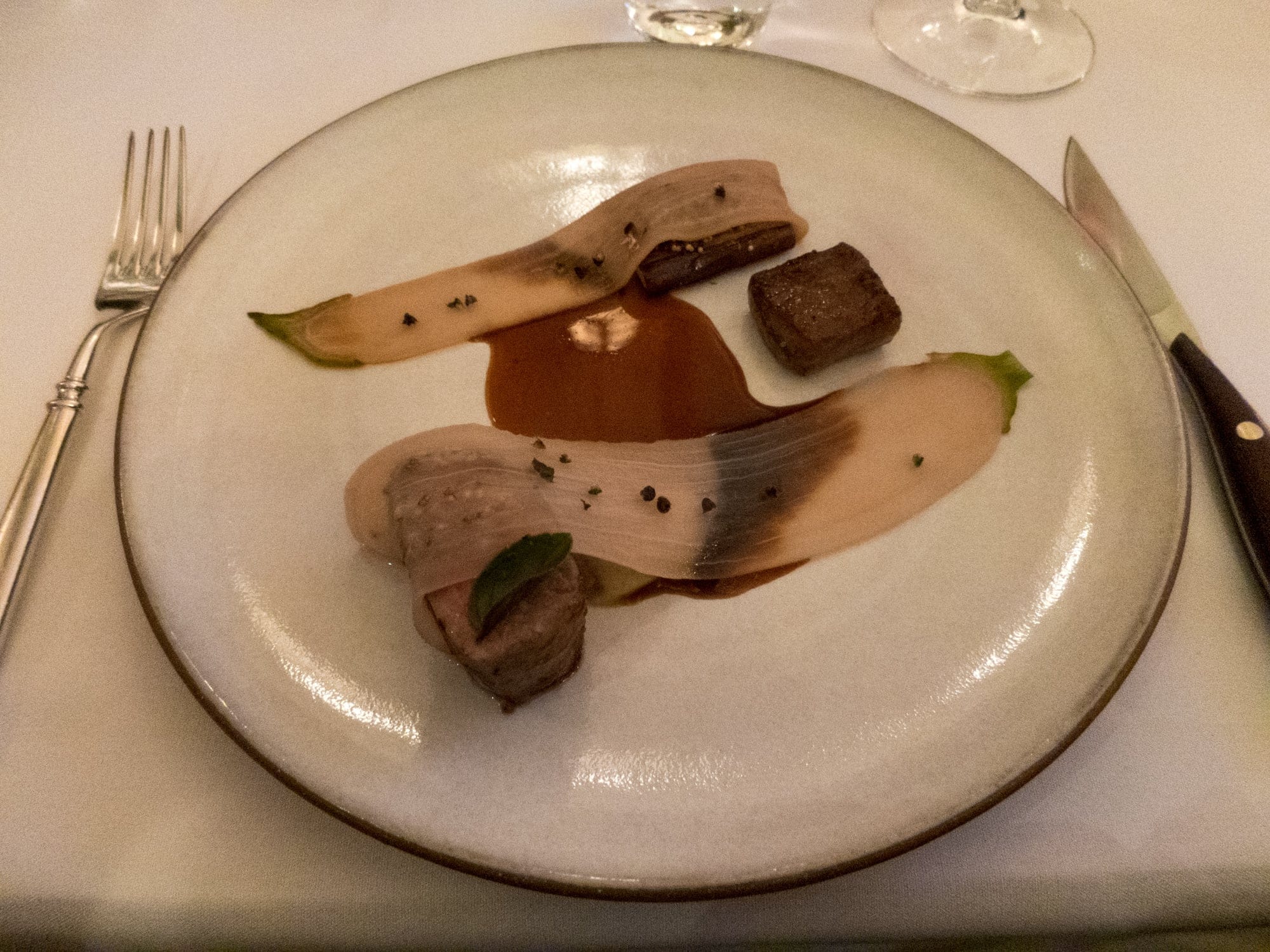 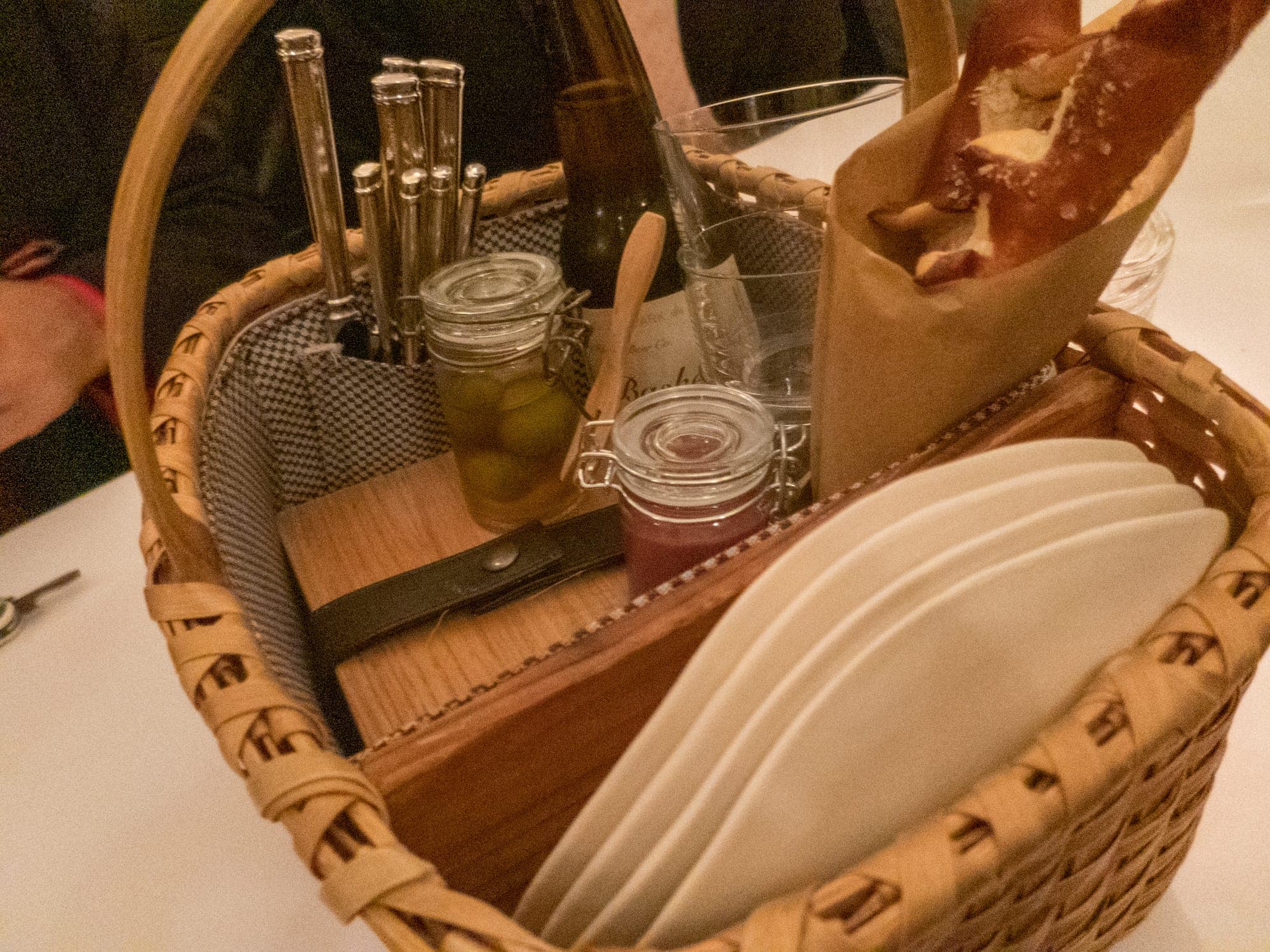 The plates in the basket were designed to look like paper plates. I loved this course's surprise presentation, evoking pictures of picnics in Central Park.

Dessert followed. I enjoyed both dessert wines that were served, which surprised me as I often find them too sweet. 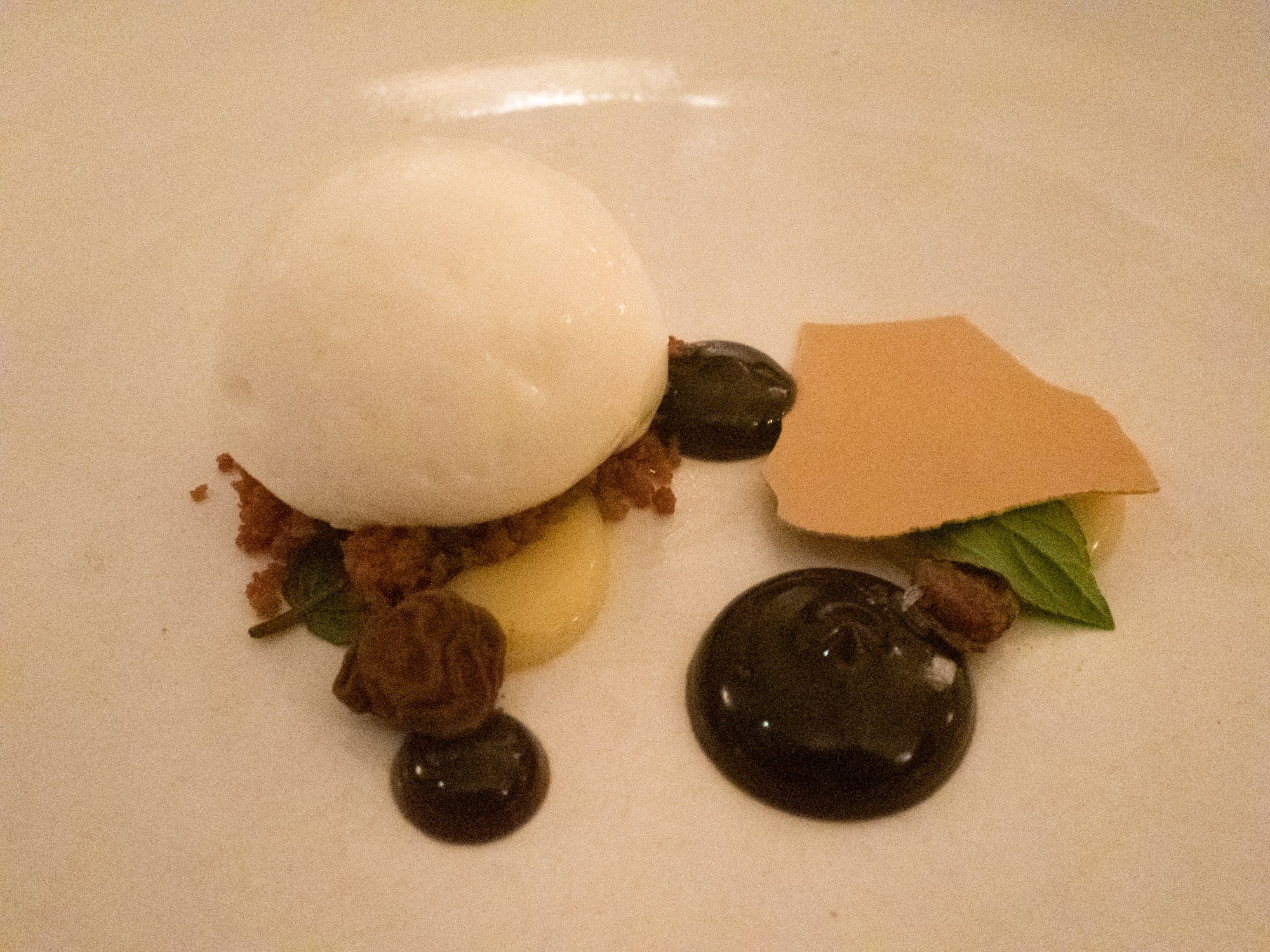 Sorbet with caramelized milk and coffee 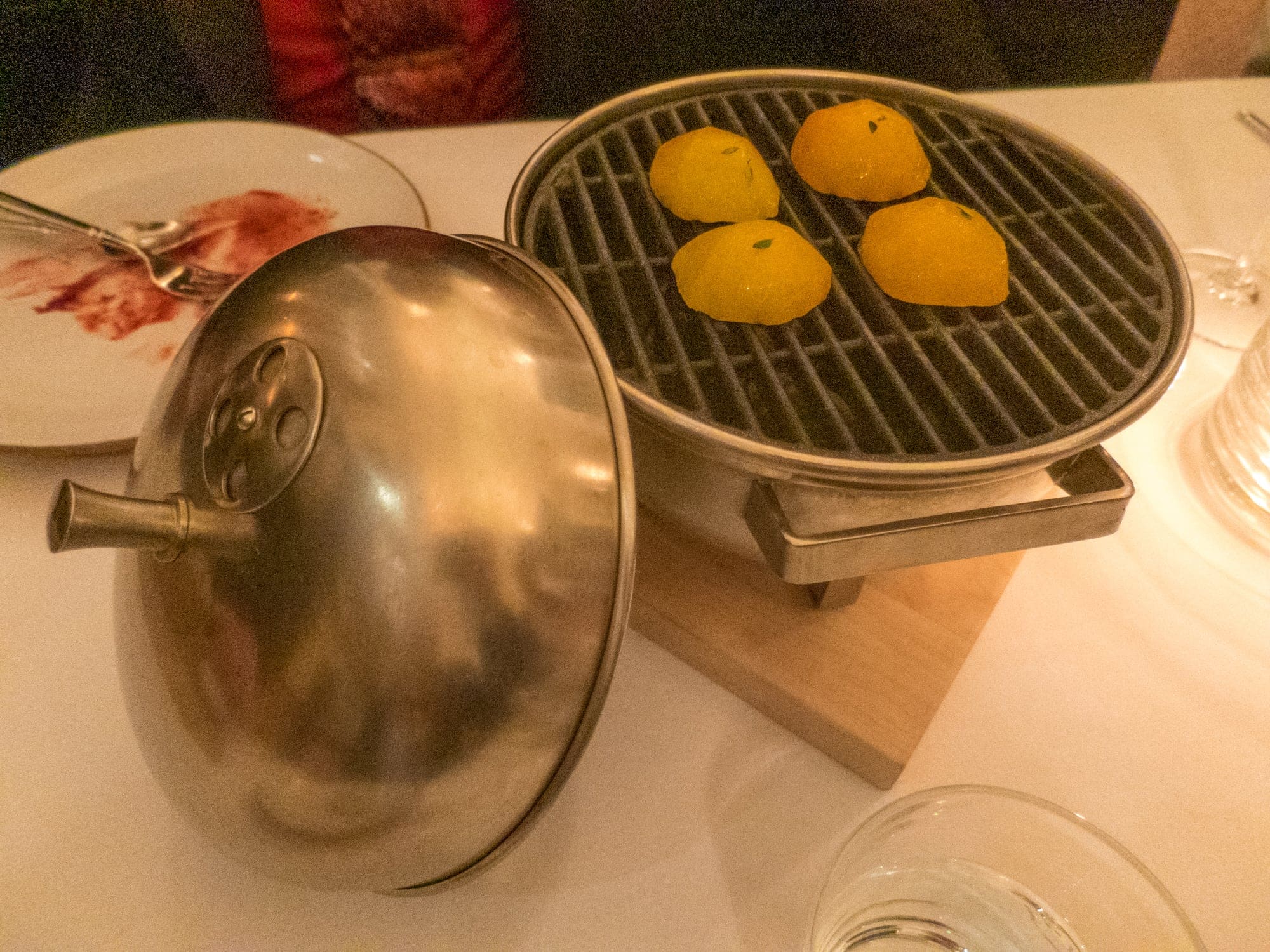 Apricots grilled at the table 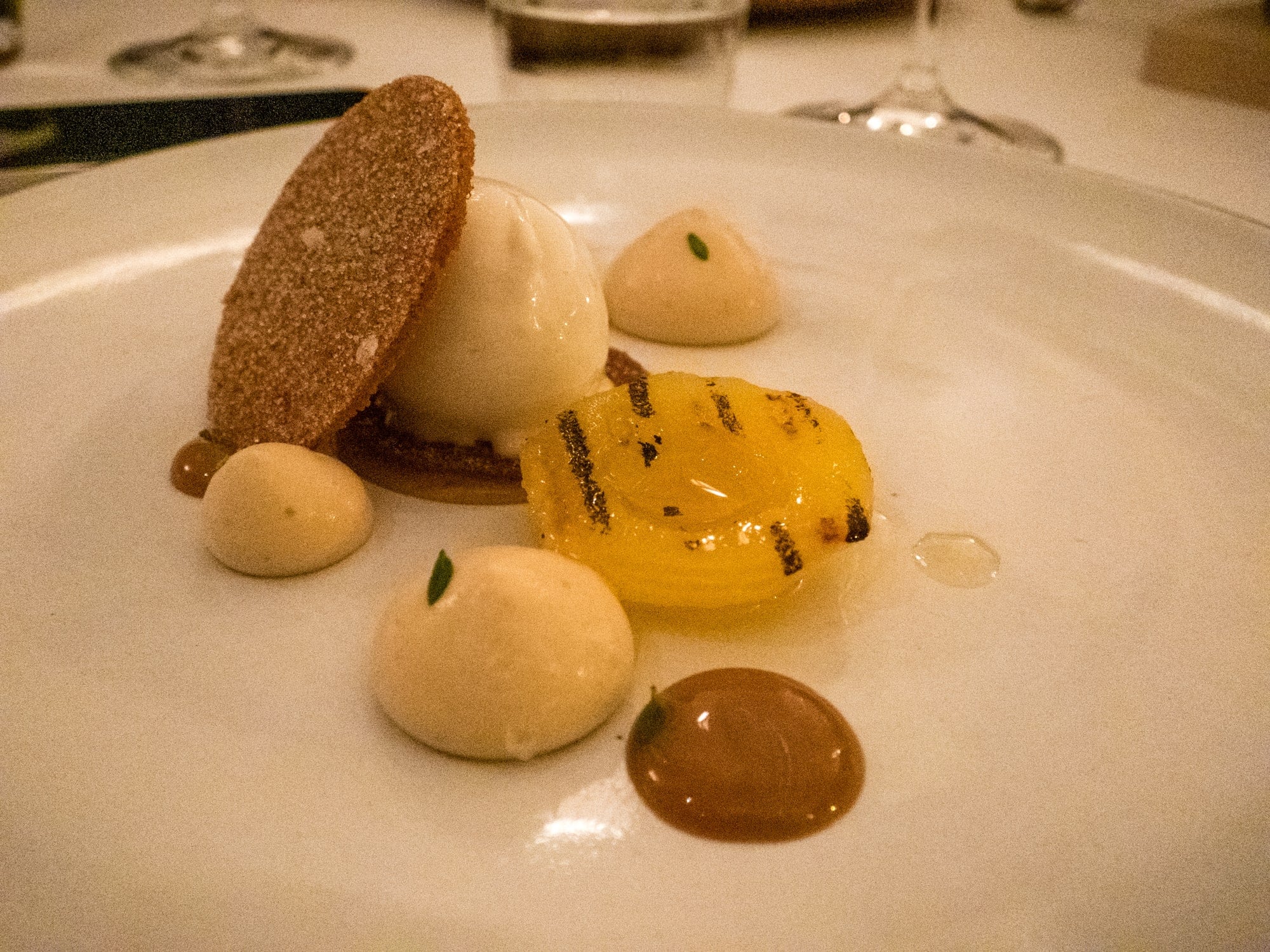 The tabletop grilling of the apricots in our last dessert offered a playful finale to an excellent dinner.

We were presented with a few small snacks, including chocolate-covered pretzels with sea salt and little black and white cookies with caramel filling.

Plus, we had a taste of Laird's Apple Brandy, produced by Laird & Company, the oldest distillery in the United States (dating back over 200 years).

I ended my coffee-themed dinner with a cappuccino. And we were provided gift bags with granola in mason jars.

Our dinner at Eleven Madison Park lasted three and a half hours (6 to 9:30 p.m.). Throughout the experience, the service was world-class.

Special thanks to Liz, our lead server, and Caleb, the Advanced Sommelier, who told us the stories behind every alcoholic beverage (and lent me his pen).

Including a glass of champagne at the start, coffee at the end, tax, and tip, we paid about $500 per person.

This dinner was (and remains) the most expensive meal I've ever paid for; however, it was worth it as it gave me a frame of reference for future fine dining experiences.

Note: Due to the pandemic, Eleven Madison Park closed on March 16, 2020, and began functioning as a commissary, preparing 3,000 meals daily for frontline workers. The experience led Humm to reflect on his work focusing on high-end clientele and sustainability. Citing the latter, he re-opened Eleven Madison Park on June 10, 2021, with a new menu that's 100% vegan food, a first for any three-star Michelin restaurant. Read a restaurant review by The New York Times.

Reservations: Highly recommended, unless you arrive early to sit at the bar. Make a reservation on Tock.