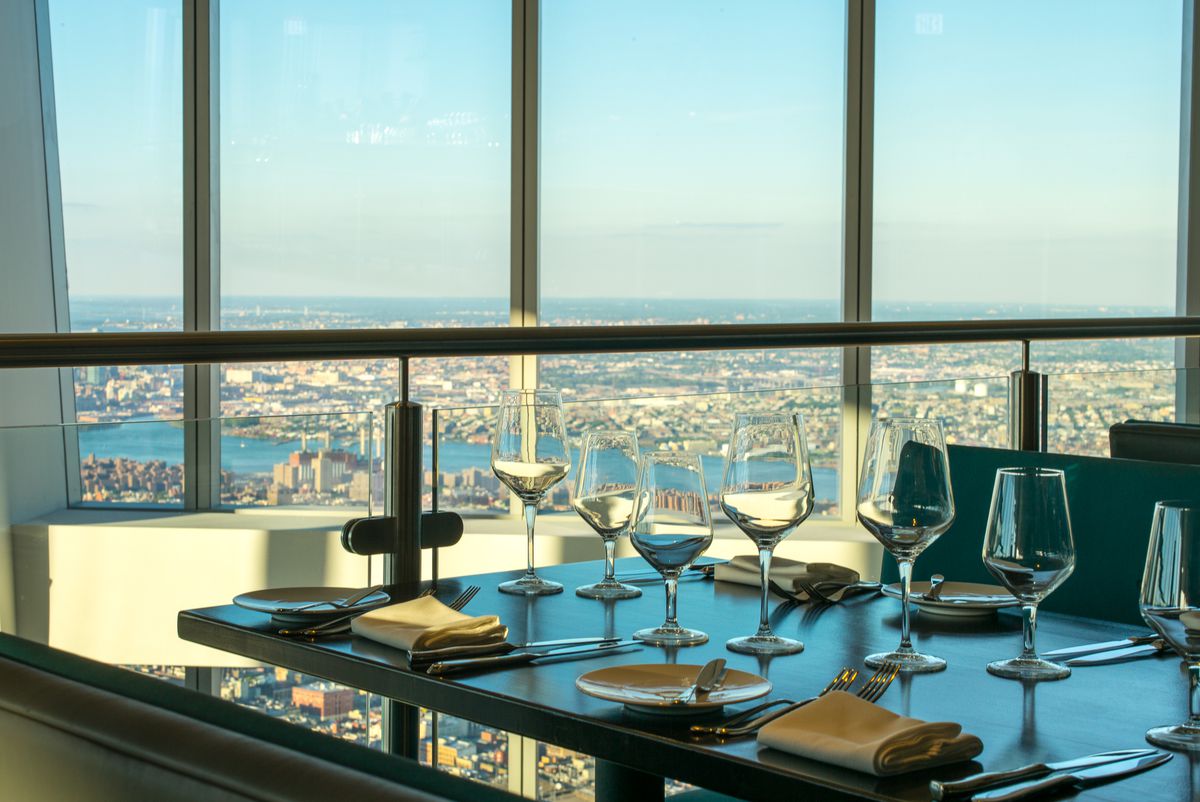 To say that an evening at Windows on the World, located on the 107th floor of the World Trade Center's North Tower, was just about the food, would be like saying a Mets game was just about the hot dogs. Sure, you were there to eat, but you were mostly there to watch, to be in awe. At Windows, with its panoramic views of the city, "New York was the main course," William Grimes wrote in Appetite City. Or as the food critic Ruth Reichl once noted, the vista was effectively a "magic carpet of lights at your feet." Joe Baum's sky palace, of course, had its non-visual merits too. Windows boasted one of the city's finest wine lists, and its sister spot, Cellar in the Sky, was a forerunner in espousing that wallet drainer known as the wine pairing. If anything, Windows helped usher in a new era of captive audience dining in that the restaurant was a destination in itself, rather than a lazy byproduct of the vital institution it resided in. Windows was a shining ambassador for New York, an escape from a city that was, in decades past, drug addled, dirty, and crime-ridden below. Even if you didn't know much about fine dining, you knew such a dream-like place existed, and you knew that it came tumbling down on September 11, 2001.

Fourteen years later, One World Trade has risen near the footprints of the felled Twin Towers. Signs on the inside and outside boast that it's the highest building in the Western Hemisphere, at 1,776 feet. Of course, the record only holds true if you count the spire that stands on top, which is akin to saying that Aunt Ellie is the tallest member of your family because she wears a single Manolo Blahnik on her head like an avant-garde derby hat. No matter; on the 101st floor is a trio of culinary establishments dubbed One Cafe, One Mix, and One Dine, all run by Legends, the folks behind the concessions at Yankee Stadium, the Rose Bowl, and elsewhere. Like Windows on the World, the chief merits of the One venues are the views they afford. Now let me explain why you probably shouldn't eat at any of them.

Even The WTC's Tour Guide Didn't Actively Recommend The Concessions

During a slick multimedia presentation on the 100th floor, one of the WTC's tour guides gives the spectators a few clever bits of advice. First, go to Di Fara for pizza, he says, which is possibly the smartest thing a tour guide has ever said in the history of the universe. Second, don't eat "dirty water" hot dogs, only the grilled ones (this guy is good). Third, don't patronize street vendors without printed prices, he argues, because otherwise you might get ripped off. His last statement is particularly resonant because One World Trade doesn't publish its menus online. And in the One Cafe food court, few items carry printed prices (there are menus floating around; good luck finding them). So you don't realize out how much you'll spend on water until you arrive at the cashier, whose touchscreen asks if you'd like to add 20 percent gratuity to your H2O. Yes, this is where you get ripped off. And in case you're wondering, the water is $5.44 with tax.

Perhaps this is why the tour guide doesn't actively recommend the concessions? At one point, he points upward to the 101st floor and jokes that it's where "the rich people eat."

Those presentations, aided by ten flat-screen televisions, are also worth mentioning because we could hear and see every one of them from our table at the prix fixe-only One Dine. Even in our modern era of stripped down fine dining, where chefs throw out the rule book along with the linens every day, being exposed to a barrage of tour speeches as you're dropping hundreds on dinner constitutes a brand new level of absurdity.

This is expensive food without a narrative.

Related: Fine dining should never involve queuing up for 25 minutes, which is how long you'll spend schlepping from the revolving doors down below to the host desk up top, a journey that includes a brief interlude in a new age-music holding pen. It should never have patrons walk through a paparazzi line of cameramen trying to take your photos for cash. It should never involve a $32 per person cover fee (what it costs to enter the WTC complex; Windows had a cover fee in its early days as well). And it should never dangle the prospect of an additional $65 fee to cut the general admissions line. So even though your three course meal is nominally $75, you end up spending $130 per person after tax, tip, and cover. That means your appetizer is $40, your main is $70, and your dessert is $20. There are no amuses, no petits fours. There is no chef's name printed on the menu or anywhere else I look. In fact I have no idea who's actually cooking here. This is expensive food without a narrative. 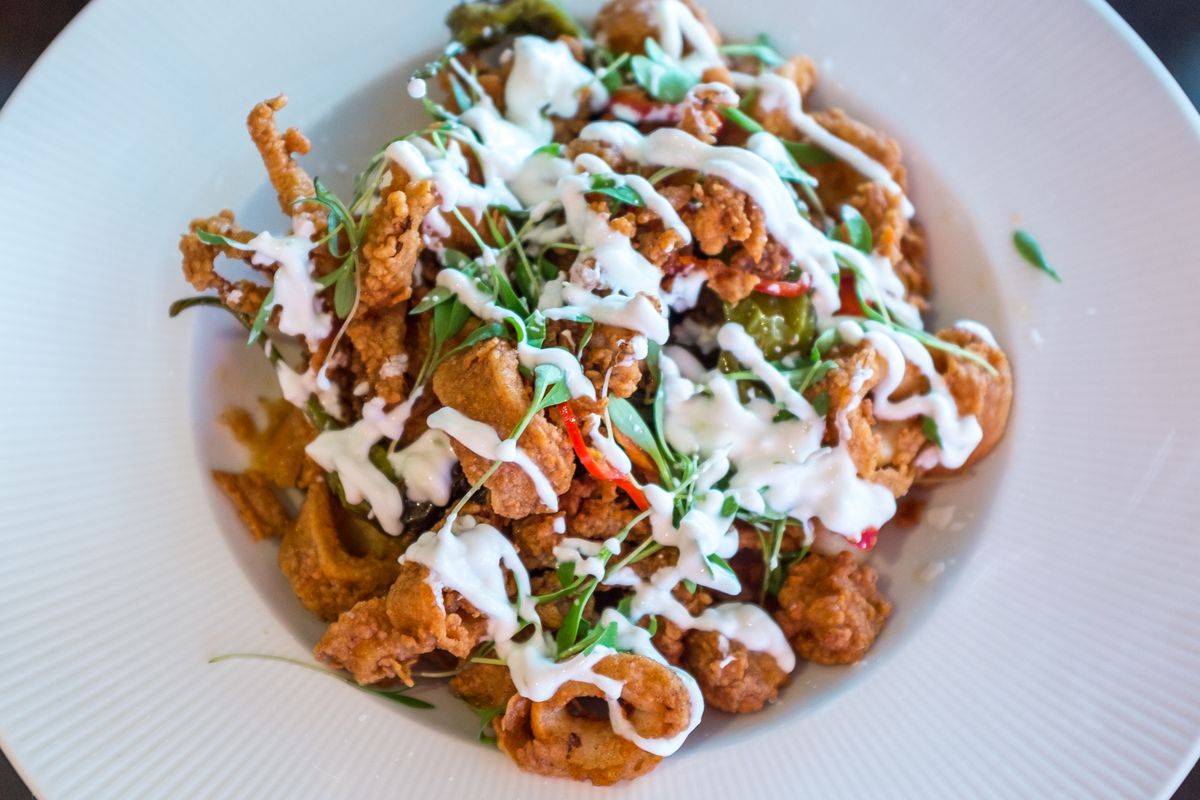 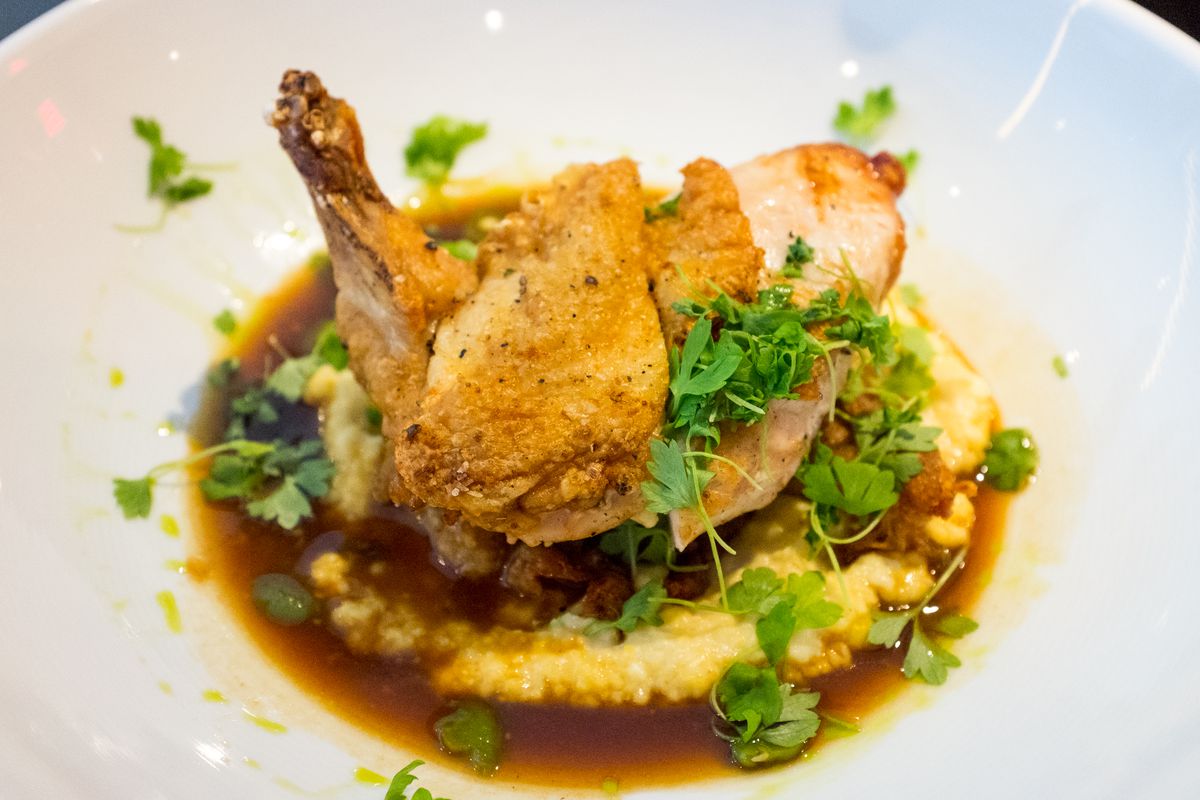 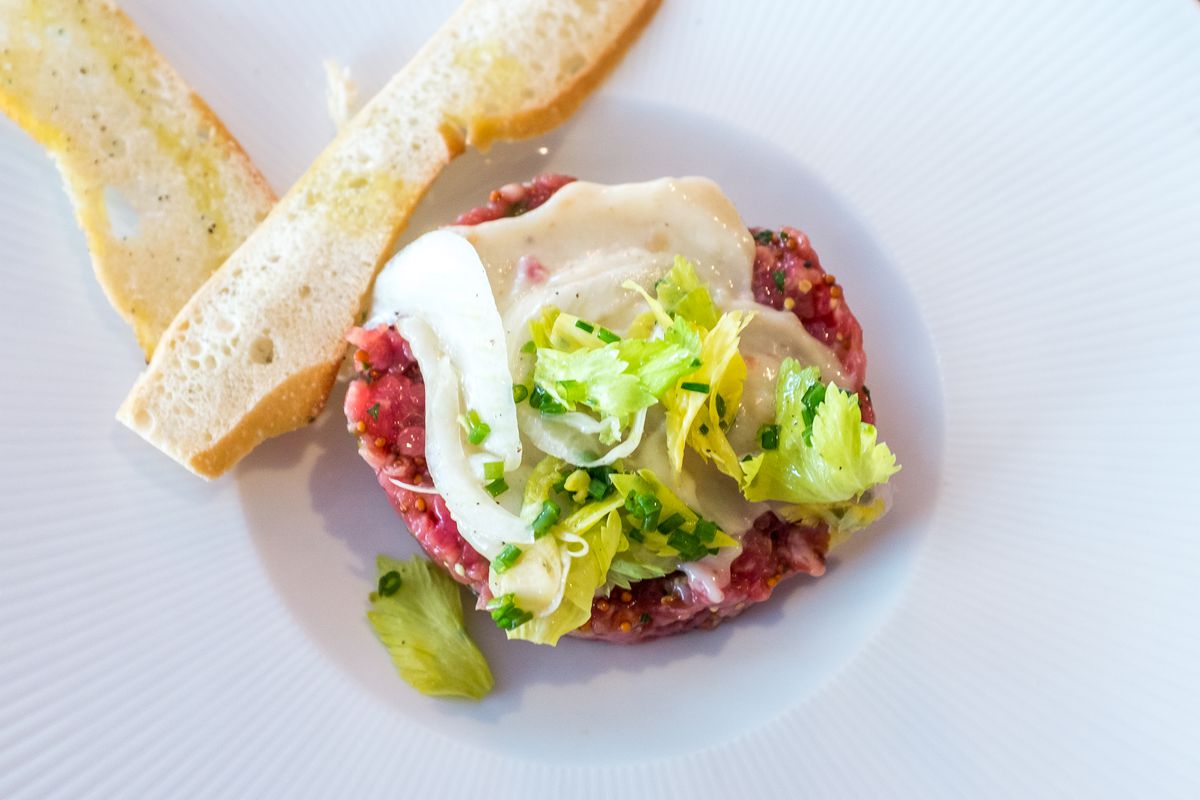 And while restaurants like Del Posto provide a compelling argument as to why rustic food can be fancy food, it's not clear that tasty albeit rubbery fried calamari should be one of the starters (kudos to the kitchen for salvaging the affair with a ton of cilantro and green chile sauce). It's also unclear whether that starter should be ricotta toast that the kitchen forgot to toast. Beef tartare with bearnaise is superb, but it's no better than downtown versions available for a quarter the price. A medium-rare bistro steak with blue cheese butter and crispy roast chicken with polenta, while both excellent, are both as fancy as any a la carte item $30 or under in Soho. And then there's the fruit tart, studded with the same cloying, candied cherries you'd find in a Manhattan.

Bottom Line: The casual, brasserie-style fare is well-executed and often delicious but doesn't merit the high-end prices or prix-fixe format, even with the view.

"Sir, I'm sorry, there's actually a bit of a wait for the bar," a host declares, in an effort to stop me from walking inside the One Mix space. "That's great," I reply. "I'm already halfway done with my meal." The confusion arose because I had exited the restaurant about twenty seconds prior, and it's likely you will do the same because the restrooms are on a separate floor.

One Mix serves "handcrafted small plates and cocktails celebrating New York." I suppose this explains why the margarita is dedicated to Corona, Queens, with its predominantly Latino population (really). Corona also happens to be one of the the region's most affordable neighborhoods, and so the margarita at One Mix is "affordably" priced at $18. The unbalanced tipple tastes of alcohol and sugar. And this is when you realize that the WTC's diluted Disney-approach to honoring the city's gastronomic diversity might not work. 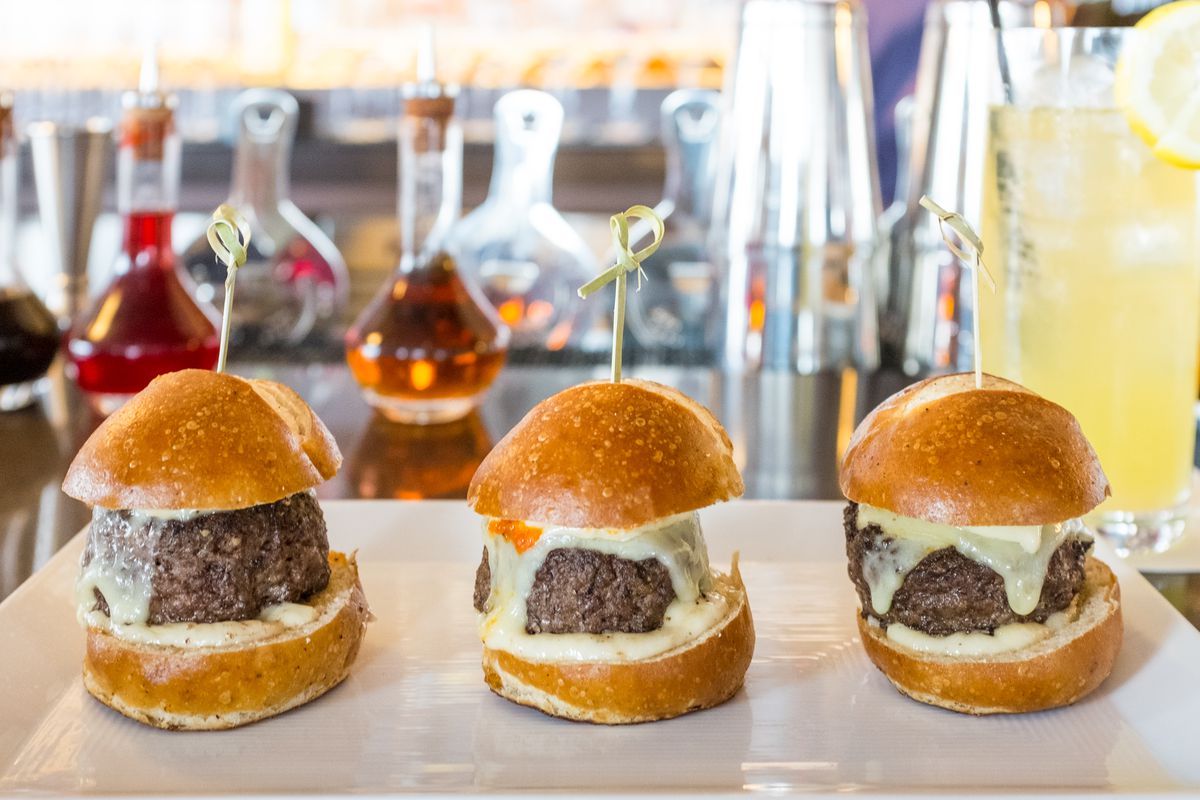 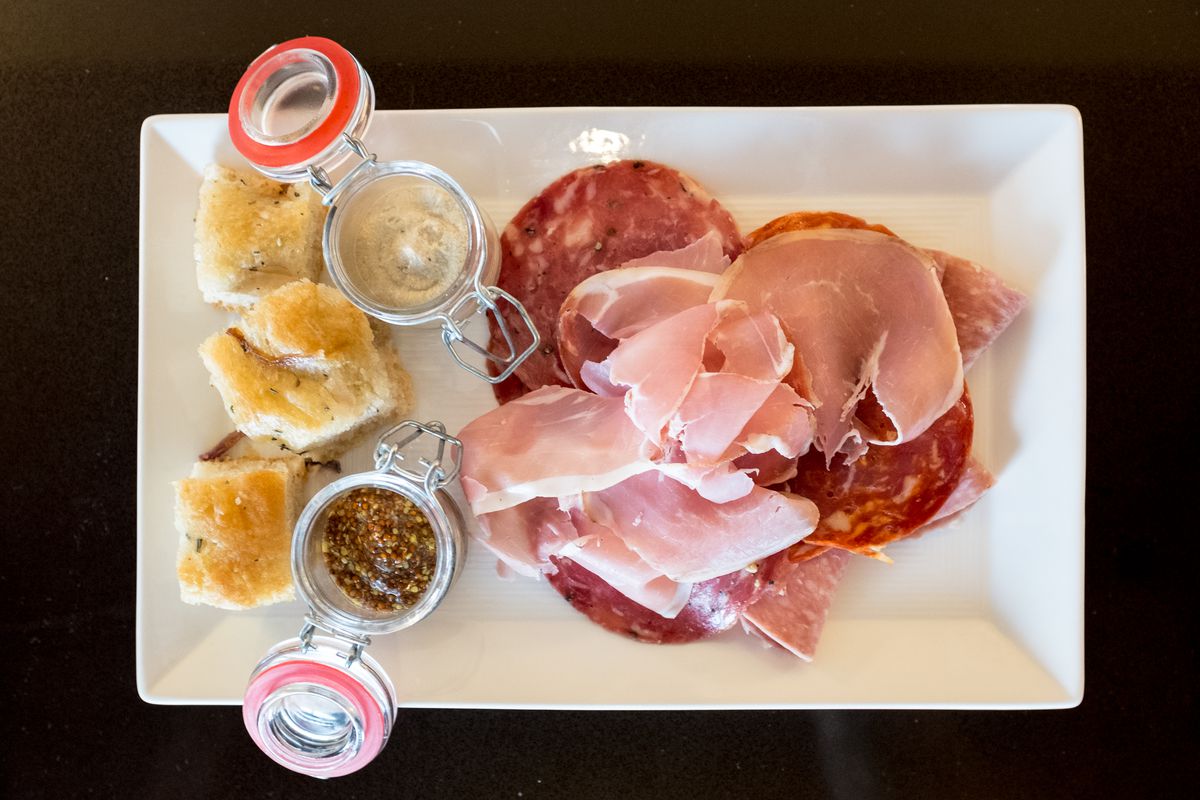 Small plates, in corporate concessions parlance, mean sliders. So instead of one hamburger we get three mini-burgers. They're a hat tip to "Brooklyn," the menu claims, a statement that technically makes sense as the dense patties mimic the hockey pucks that the Islanders will use when they move to the Barclays Center. The mini meatball hero, an ode to Staten Island, is a single, leaden globe of meat, the size of a golfball, stuffed into a mini-loaf that walks a fine line between crunchy and stale. Bronx-inspired chile and olive empanadas are as mushy as oatmeal, and come with a side of yellow arroz so cold and insipid it would've made the chef at a boxed rice company frown.

The Views at One World Trade

One Dine: The fine dining restaurant boasts a real billionaire's vista of Midtown Manhattan, the East River, and The Hudson. Elevated banquettes near the east side of the room are your most desirable seats. The closer you are to the balcony on the north side of the dining room, the more likely you'll hear (and see) the tour groups below.

One Mix: The casual space affords some of the best seats in the house if you get the "window counter" overlooking the North Hudson and Manhattan. Many of the table seats overlook New Jersey and the Hudson, while bar seats largely face away from the windows.

One Cafe: Most seats are far recessed from the windows. Mostly views of Jersey.

Most Importantly: The 100th floor observation deck, open to all ticket holders, affords the best panoramas in the complex, including a bird's eye view of New York Harbor and the Statue of Liberty.

"What's in the charcuterie plate?," I ask a waiter. "Meat," she replies. Moments later she realizes, correctly, that we expect a more comprehensive answer, and she accurately guesses one of the platter's three components: prosciutto, an Italian ham that's supposed to be cut paper thin; here it's as thicker than the cotton on most oxford shirts.

Bottom Line: Order a cold draft beer ($10 each), a stellar, well balanced daiquiri ($18), or a martini at sunset and enjoy the view. Skip everything on the food menu except for the reuben sliders ($12), chock full of super tender corned beef and tart sauerkraut.

One Cafe Is a Terrible Place to Eat

The most accessible of the three dining options at One WTC is without question the most overpriced area of the complex, a problem that's facilitated by the lack of visible prices. This is where tourists on a budget stand to get hit the hardest. A cup of thin, watery, bitter coffee of uncertain origin is $5. And pain au chocolat, so underbaked it looks like a heap of rumpled, cream-colored khakis, turns out to be $8 (compared with under $3 at New York's best bakeries). There's your $13 value meal.

BLT's are served not as hot sandwiches but as cold wraps. "Would you like me to heat it up?," a concessions worker asks, explaining that's how many folks take it. Right on. And the result is a gluey wrap filled with hot lettuce, hot tomato, and a mess of bacon whose scent is closer to that of a varsity locker room than a good piece of meat. Cost: $12. Flatbread pizza, finished with flavorless mozzarella, is about as gourmet as a frozen slice of Elio's. An Italian hero, which is supposed to be served cold on Italian bread with a light vinaigrette, is served on a baguette with balsamic and heated up. The flavor is pure salt. This is the type of fare that would only pass muster at a movie theater or a high school cafeteria.

The most disheartening thing about One Cafe, One Mix, and One Dine is that a tourist would be more inclined to visit any of them over, say, Momofuku Noodle Bar, Roberta's, La Vara, or The Breslin. And the thought of an out-of-towner writing off New York's great dining scene after a shake down at our city's most recognizable new building is a notion that should trouble us all. The restaurants at One World Trade aren't so much ambassadors for our shiny and safe city as they are shady hustlers on a street corner. If Windows on the World, when it opened in 1976, served as a glimpse to the rosy future of New York, the concessions at One World Trade represent a retreat to its soiled past.

Some Additional Notes About the Observatory