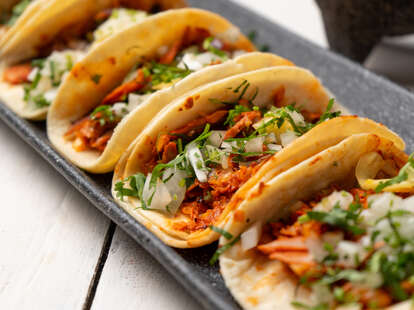 May 5 is Cinco de Mayo, and restaurants all over the country celebrate Mexican culture on this day with free food and discounts, whether it's the locally-owned restaurant down the street or a major chain like Del Taco.

We've got good news if you want to join in and take advantage of one of those offers. You can. We have pulled together all the best food deals from restaurants around the country, including big chains like Moe's Southwest Grill, Del Taco, Taco John's, and others.

Del Taco
The deal: Del Yeah! Rewards members get an Epic Burrito free when they order one through the app or website. There's also free delivery all day.
When: May 5

California Tortilla
The deal: Order anything in-store or online on Cinco de Mayo to get a coupon for a free taco that can be used the following week.
When: May 5

KFC
The deal: Get a free KFC Chicken Sandwich with a purchase of at least $12 through the KFC mobile app.
When: Through June 5

Wendy's
The deal: For National Foster Care Month, grab a free beverage in any size through the Wendy's app with an order. Each time this is done, Coca-Cola and Dr Pepper will donate to the Dave Thomas Foundation for Adoption up to $500,000. It refreshes daily, so you can grab a free drink every day in May.
When: Through May 31

The History of Tailgating

Taco John's
The deal: Get five softshell beef tacos for $5.55. Use the Taco John's app, and you'll have to be part of the loyalty program.
When: May 1-5

Bar Louie
The deal: Get the limited-time-only Tostada Burger for $3 off on Cinco de Mayo.
When: May 5

Tocaya Organica
The deal: For Cinco de Mayo, you can grab a $5 margarita, $3 bottled beer, or a $7 Casamigos Blanco Margarita.
When: May 5

Velvet Taco
The deal: The Weekly Taco Feature at the restaurant that sounds like a movie starring Ewan McGregor is the Steak Milanese, and you can grab one for $5.95.
When: May 4-10

Tijuana Flats
The deal: It is running a limited-time $5 menu which includes the Tijuana Trio, New Dueling Queso, and more.
When: May 5-7

Laredo Taco Company
The deal: Get a free Chicken or Beef Fajita Taco. Just sign up for LTC text alerts before May 5–text "tacos" to 88388–and you'll get a coupon for a free one.
When: May 5

Hungry Howie's
The deal: Get Howie Bread for a dollar with any online carryout order that hits the $15 minimum. Use the code "CINCO."
When: Through May 8

Round Table Pizza
The deal: Get a personal pizza with four toppings for $5.50 with the purchase of a large or extra-large pizza.
When: May 5

Mountain Mike's Pizza
The deal: Get free mini churros when you spend at least $20.
When: May 5

Wendy's
The deal: Use the app to get a free small order of fries with any Biggie Bag purchase.
When: May 2-8

Bottled Blonde
The deal: Grab a $12 Taco Pizza and $8 Tres Generaciones Tequila drinks. The deal is available at its locations in Scottsdale, Dallas, Houston, Fort Worth, and Miami.
When: May 5

Más Veggies Vegan Taqueria
The deal: The ghost kitchen offers free chips and salsa on any order of at least $10 when you order for pick-up. Though, that's not valid when ordering through third-party delivery services.
When: Ongoing

Kolache Factory
The deal: Take a dollar off any two Cinco de Mayo-themed kolaches.
When: May 5

Pizza Hut
The deal: Get a Tastemaker with three toppings for $10 right now.
When: Through June 12

Somos
The deal: All of its meal kits, including the Cinco de Mayo Kit, will be half-off through Cinco de Mayo.
When: Through May 5 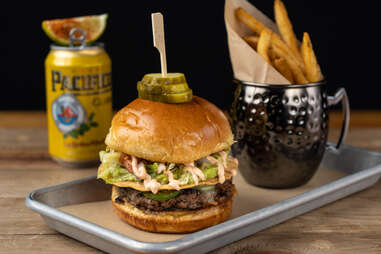 On the Border Mexican Grill & Cantina
The deal: The Grande House Margarita will be just $5 for Cinco de Mayo.
When: May 5

Abuelo's Mexican Restaurant
The deal: Abuelo's is slinging drink specials for Cinco de Mayo. Get a Grande Mexican draft beer (22 ounces) for $5 or a Flag Margarita for $8.95, among other offers.
When: May 5

El Vaquero Mexican Restaurant
The deal: Get bottles of Modelo, Negra Modelo, Corona, Premier, and Pacifico for $4 when dining in.
When: May 5

Azul Mariscos – Chicago, Illinois
The deal: Grab a special version of the restaurant's signature Patron Margarita Tower for $80.
When: May 5-8

The Dawson – Chicago, Illinois
The deal: The Cinco special is Lamb Barbacoa, a plate meant to be shared. It's seasoned with adobo, oregano, bay leaves, garlic, and onion, roasted in Banana leaves, served with Salsa de Cascabel, and pickled onions on a corn tortilla for $38.
When: May 5 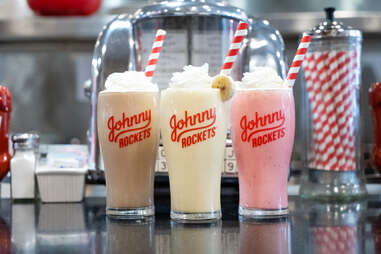 Other Deals on Cinco de Mayo

Wendy's
The deal: Use Wendy's app to get buy-one-get-one-for-$1 Premium Burgers or chicken sandwiches.
When: Through May 31

Yogurtland
The deal: For every $25 you spend on e-git cards, you'll pick up a bonus $5 card that can be used from May 8-31.
When: Purchase through May 7

Johnny Rockets
The deal: Teachers and healthcare workers with a valid ID can grab an Original or Deluxe Shake for free with any purchase in-store.
When: May 4-10

Denny's
The deal: The Endless Breakfast promo is around for a couple of months with a plate that includes pancakes, scrambled eggs, and hashbrowns for $7.
When: Through June 21

Fleming's Steakhouse
The deal: Spend $100 on a gift card, and Fleming's will pass along a bonus card worth $20.
When: Through June 19

Edible Arrangements
The deal: Purchase the Mother's Day Chocolate and Cheesecake Platter and you'll get 20% when you order for pickup. Use the code "PICKUP20."
When: Through May 6

7-Eleven
The deal: 7Rewards members can grab three of the shop's new Mini Spicy Breakfast Empanadas and a coffee for $4.
When: Through May 24

Marco's Pizza
The deal: Take 25% off your first order after downloading Marco's Pizza app.
When: Ongoing

BJ's Restaurants & Brewhouse
The deal: Spend $50 on an egift card for Mother's Day and get a $10 bonus card for free. Bonus cards can be redeemed from May 9 to June 19.
When: Through May 8