<<
(keep reading to learn what happened) 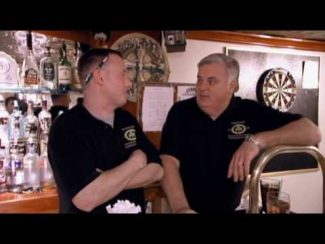 Though the Finn McCool’s Kitchen Nightmares episode aired in November 2007, the actual visit from Gordon Ramsay happened earlier in the year in March.

It was Kitchen Nightmares Season 1 Episode 7.

In this episode, Gordon Ramsay heads to Finn McCool’s restaurant in Westhampton, NY, which is obviously in the Hamptons.

The Finn McCool restaurant is owned by Buddy Mazzio, a retired policeman.

Because Finn McCool’s was located in Westhampton Beach, it had a very seasonal cliental.

During the summer months, the place would be packed with tourists visiting the Hamptons.

But during the winter months, things were pretty lean as Westhampton Beach had a permanent population of under 2,000 residents at that time.

The restaurant got its start after Buddy retired from his job in 2006, which means that it’s only been open for a very short time at the time of the Finn McCool’s Kitchen Nightmares episode.

He promptly opened up Finn McCool’s pretty much right as soon as his retirement went through.

Beyond that, Jason’s wife Melissa was a server, so this was definitely a family affair.

Gordon visited the restaurant in February, which is the low season in Westhampton Beach.

He was amazed by how empty the streets were and remarked that it was like a “funeral parlor”.

Gordon orders up some of Brian’s food but, as you’d expect, he’s not very satisfied.

The salmon was covered in balsamic vinegar and the shepherd’s pie was incredibly greasy.

So greasy, in fact, that Gordon had to run to the bathroom to throw up. That’s never a good sign if you’re a chef!

What’s more, the cleanliness and organization was also lacking.

For example, Francis, the sous chef, dropped a chicken wing on the floor.

He then just picked it up and put it in the fryer, claiming that the fryer would sterilize.

I guess that’s kind of true…but it’s still not what you want to see from a restaurant lol.

Gordon also asked other locals about their opinion of the Finn McCool’s restaurant, with some local firemen saying they didn’t like it because it only served fried food.

Gordon joked that Finn McCool’s wasn’t just a “kitchen nightmare”, but it was a “kitchen disaster.”

To fix the problem, Gordon Ramsay demanded a deep cleaning session from the whole family.

In addition to the cleaning, Gordon gave the restaurant a makeover to improve the ambiance and experience.

He also worked with Brian to create a brand new menu that will offer better food and help the restaurant work more effectively.

The new concept has a much more family-style approach, with more homey dishes including a chicken dish for the firemen.

To help relaunch the new Finn McCool’s restaurant, Gordon convinces local patrons to come back, along with the local paper’s food reviewer.

There are some bumpy spots during the relaunch with dishes taking long to cook, but the critic eventually gets her food and is generally impressed with it.

So was the Kitchen Nightmares Finn McCool’s episode a success? Keep reading our update to learn what happened next and if this Hamptons restaurant is still open in 2022 and beyond.

Finn McCool's Update – What Happened Next?

After the Finn McCool’s Kitchen Nightmares episode aired, Buddy was a little upset because he said that Kitchen Nightmares used deceptive editing practices to make the family’s disagreements seem more dramatic than they really were.

Still, that’s kind of what you’d expect from a reality TV show – viewers don’t want to just watch a bunch of people living in perfect harmony.

For example, Brian didn’t actually drive off in real life, which makes some of the drama in the episode much less dramatic.

One other interesting tidbit is that it came out that Finn McCool’s was picked for Kitchen Nightmares after Brian had auditioned to be on Hell’s Kitchen.

Despite Buddy’s issues with the editing, Finn McCool’s seemed to generally be doing pretty well initially after the Kitchen Nightmares episode.

Yelp reviews of the restaurant were more positive and Buddy’s financials were doing better. However, this newfound success wouldn’t last.

The new owners continued to run the restaurant as Finn McCool’s for another few years.

However, Finn McCool’s eventually closed in 2012 due to a lease issue.

The restaurant officially closed in March 2012 and it was later boarded up in June of that year.

That means that, even with the change in ownership, Finn McCool’s was still only able to survive for five years after Gordon Ramsey’s visit on Kitchen Nightmares.

As of 2022, the old Finn McCool’s Westhampton NY location seems to be occupied by a VFW post – VFW Post 5350 to be specific.

Buddy Mazzio is still alive as far as I can tell, and hopefully it stays that way.

You can learn more on Buddy’s LinkedIn page.

What happened to Brian Mazzio?

Brian Mazzio was Buddy’s son and the chef from the Finn McCool’s Kitchen Nightmares episode.

Brian is still cooking in various restaurants – you can follow him on Instagram to see his food.

According to his LinkedIn page, he’s the chef at another restaurant in the Hamptons.

The Finn McCool’s Westhampton story seemed to start off well after the visit from Gordon Ramsay, with improved reviews for the restaurant.

Unfortunately, Buddy Mazzio, the Finn McCool’s owner, had to sell the restaurant in 2009, around two years after the Kitchen Nightmares Finn McCool’s episode.

The new owner still ran it as Finn McCool’s until 2012, when it finally closed because of a lease issue.

As of 2022, the old Finn McCool’s NY location seems to be occupied by a VFW post.

Buddy is still alive and running his own private detective agency while Brian is still working as a chef.

If you want to see updates for other nearby New York Kitchen Nightmares episodes, you might want to check out our updates for Handlebar in Mount Sinai NY and Seascape Inn in Islip NY.

What did you think about the Finn McCool's episode of Kitchen Nightmares? I'd love it if you shared your thoughts on the episode in the comments below!

And don't forget to check out all of the other

What did you think about the Finn McCool's episode of Kitchen Nightmares? I'd love it if you shared your thoughts on the episode in the comments below!You can also click the buttons below to share this post!And don't forget to check out all of the other Kitchen Nightmares updates 2022-08-29 06:29