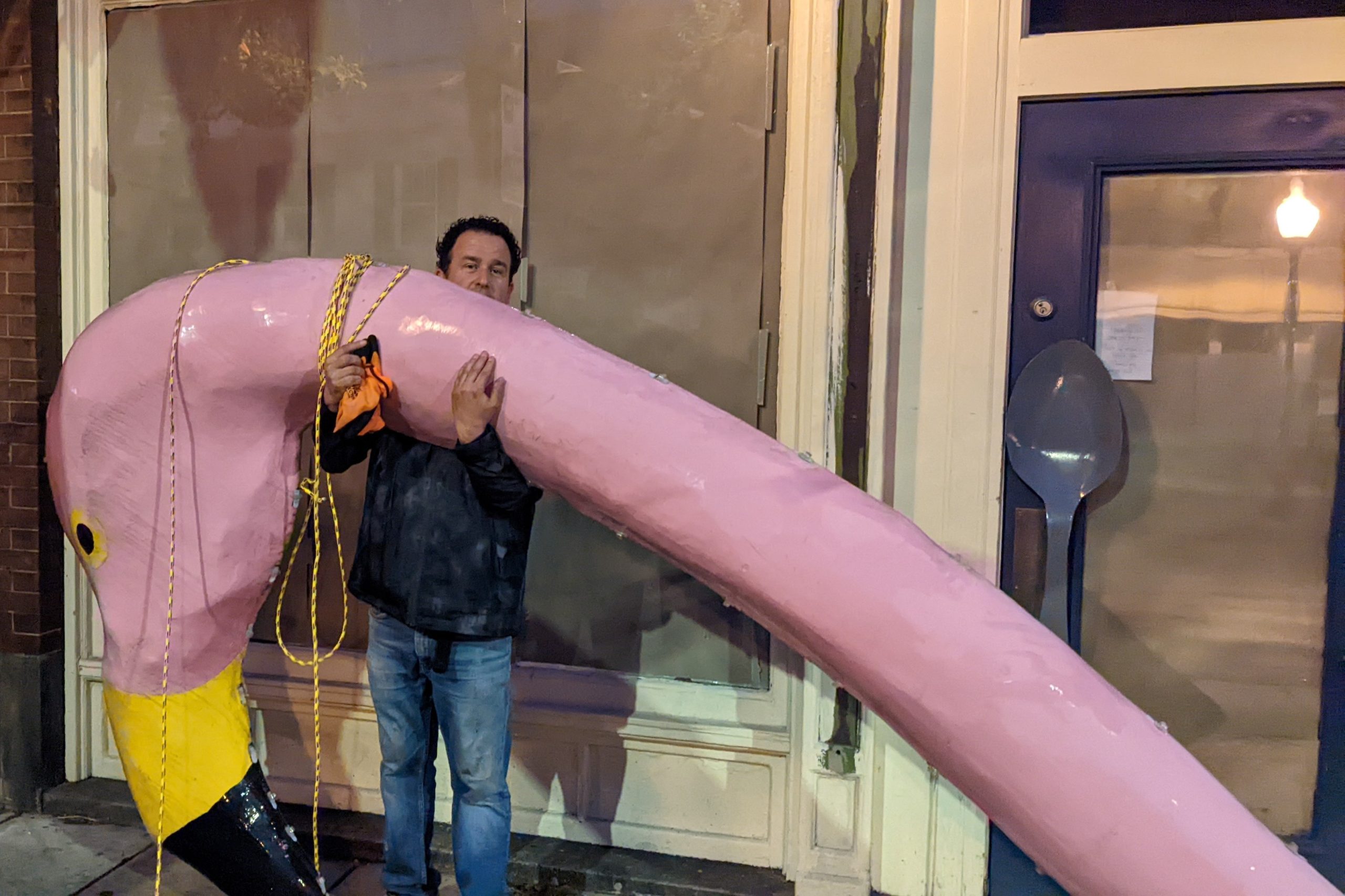 The Flamingo has flown the coop.

Around 4 a.m. on Thursday, artist Randall Gornowich and others started taking down “Big Pink,” the giant pink Flamingosaurus that he designed and fabricated as a holiday decoration for the former Café Hon restaurant in Hampden nearly two decades ago.

The sculpture is coming down because café owner Denise Whiting closed the restaurant on April 29, after 30 years of operation, and a new team is coming in with a different concept that apparently doesn’t include a giant flamingo. As of this morning, all that was left was the bird’s body.

“It’s a sad day in Hampden,” Whiting wrote on Facebook yesterday. “The Bird’s head, neck and legs were removed today. I remember fondly sitting with Randall and talking about this giant Christmas decoration. It seemed like only yesterday.”

“Just as we put it in storage, the skies opened and the angels wept,” Gornowich wrote on Facebook.

The new restaurateur at 1002 West 36th St. is The Foreman Wolf Restaurant Group, whose principals haven’t said exactly what will take the place of Café Hon. Many of the café’s contents were sold at auction, and its windows have been papered over so no one can see inside.

June 23, it turns out, was National Pink Flamingo Day, dedicated to the plastic lawn ornament that became a pop culture icon in the 1950s and later was used by filmmaker John Waters as the innocuous title for his 1972 film.

“The reason I called it ‘Pink Flamingos’ was because the movie was so outrageous, that we wanted to have a very normal title that wasn’t exploitative,” Waters explained in a 2014 interview with Emanuel Levy. “To this day, I’m convinced that people think it’s a movie about Florida.” 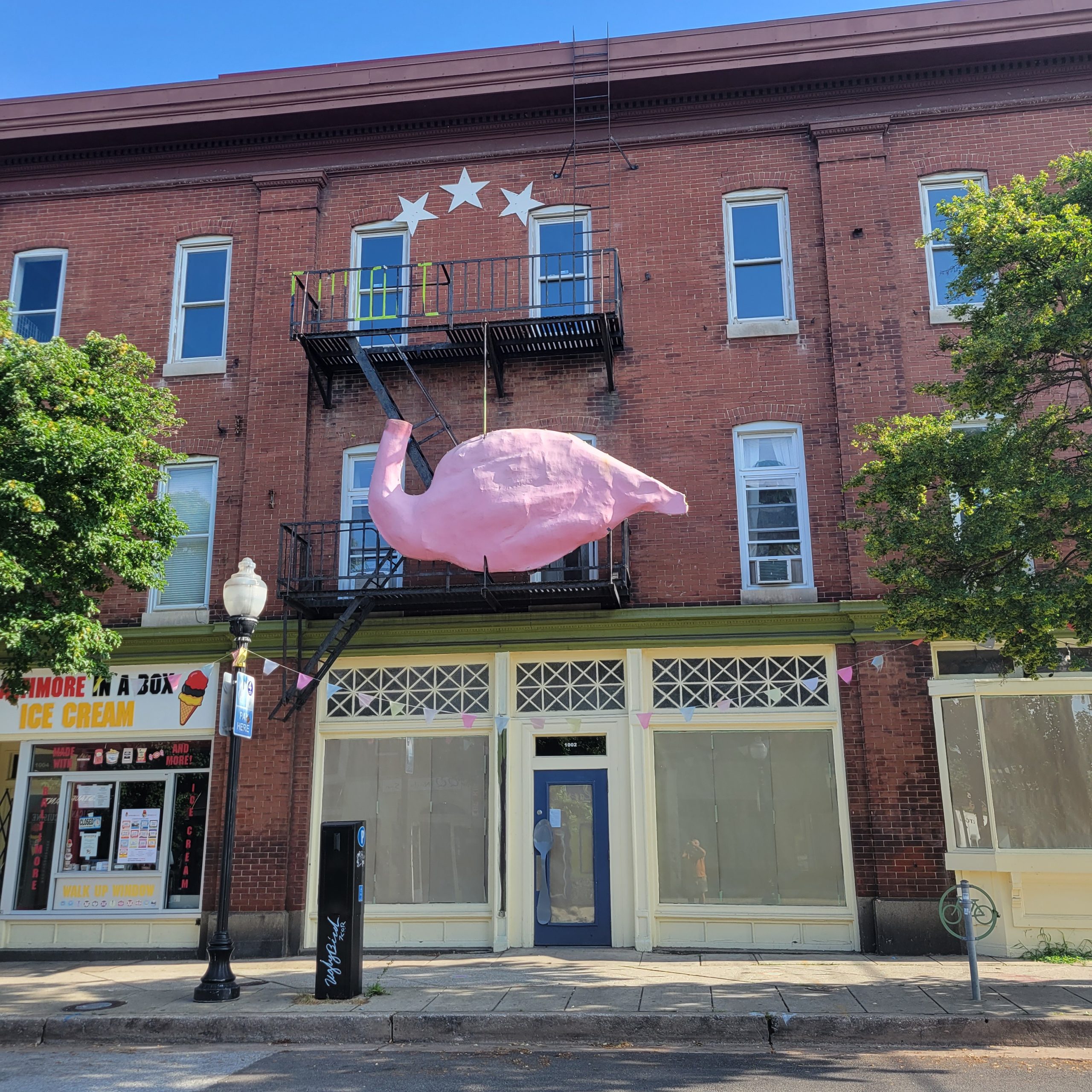 All that remained Friday morning of the pink flamingo sculpture that hung above Café Hon’s entrance was the bird’s body. The sculpture is coming down because the restaurant closed on April 29 after 30 years of operation. Photo by Ed Gunts.

For years the plastic lawn ornaments were associated with tackiness and people who had little taste, such as characters in Waters’ movie who had two in front of their trailer. “I don’t remember ever seeing a pink flamingo where I grew up” in Lutherville,” Waters told Levy. “I saw them in East Baltimore.”

Later, they were adopted by hipsters and others who knew good taste from bad and displayed them ironically. That made the pink flamingo a fitting symbol for a community like 1990s Hampden with its new, self-aware businesses called Café Hon and Hampden Junque.

Gornowich said in an email message that his sculpture went up on Café Hon’s façade in December 2002.

“Mickey Fried, Jan Cook and I worked on it in Jan’s backyard right in Hampden,” he said. “I worked with a group of people in Hampden to cast it in Fiberglass seven years later, in the fall of 2009. I had been decorating the façade of Café Hon since 1995, when I did an oddball sculpture of Santa Claus’s butt sticking out of a chimney. There was a sign I created above it that said ‘Stuck in Hampden, Hon.’”

Whiting, who wasn’t present to see the bird come down, had said she hoped to see the Flamingo stay in place until the HONfest festival on June 11 and 12, so she got her wish.

“The bird was enjoyed by everyone that saw her,” she said last night. “If I had a quarter for every picture taken, I would have a very nice nest egg.”

Whiting referred questions about its fate to Gornowich.

Gornowich said on Facebook that it was a “crazy coincidence” that he started taking the sculpture down on Pink Flamingo Day.

He said in an email message to Baltimore Fishbowl that it will be “safely stored” for now but he’d like to see it return to public view in Hampden. He said he’d like supporters to petition the city to install it at Roosevelt Park, two blocks from where it was.

“I’m hoping to rally enough business support and community enthusiasm to get it placed in the front circle of Roosevelt Park, right at the corner of Falls Road and 36th Street,” he said in his email message.

“I would like to see it 30 feet in the air on a single pole as if it were the flamingo’s leg. I know I can’t do this alone. I know an engineer will need to be employed as well as a construction company. Right now this is only an idea and a dream. I suspect there are others who will help me make this happen.”

Commenters on social media have already begun suggesting who could help Gornowich relocate his sculpture, from the Hampden Village Merchants Association to City Council member Odette Ramos to the city’s Department of Recreation and Parks. Just as Pigtown has Rodney Carroll’s sculpture of a pig on a pole, they say, relocating “Big Pink” could help keep Hampden on the map.

Gornowich replied that lifting the sculpture 30 feet in the air would put it so high that it couldn’t be tagged with graffiti.

“Bright lights on it so you’d be able to see it from The Avenue as well as 83 (you know, like the Pepsi sign or the McD signs one always sees from the interstate),“ he wrote. “THAT’S MY VISION!”