A massive fight involving customers at a Golden Corral restaurant in Pennsylvania saw chairs and tables being thrown across the dining room, all captured on video that has now gone viral.

It has been claimed that the fight started over the buffet running out of steak. Police are currently investigating who was responsible for starting the fight and the reason for it. Authorities have said they believe over 40 people were involved.

McDonald's Worker Reveals How Big Macs Are Made in Viral Video

McDonald's Worker Reveals How Big Macs Are Made in Viral Video

The fight occurred on Friday, January 28, at the Golden Corral restaurant at 1465 Street Road, Bensalem, a township bordering Philadelphia.

Video footage of the mass brawl has begun circulating on social media and shows the moment guests begin throwing chairs at one another.

When things began to turn violent, some customers can be seen moving away from their tables. Workers can also be seen pleading with customers to calm down and separate the large groups and prevent them from throwing chairs and tables at one another.

Throughout the video, screams can be heard from customers as chairs are flung through the air. A shortened clip of the brawl, posted by Twitter page Stream the Vote, has been viewed over 75,000 times.

Jesus does not want your dumbass fighting at Golden Corral

A former employee, Dylan Becker, told Fox 19 that he spoke to a friend who was working at the restaurant during the incident. He claimed that his friend told him the issue started due to an argument over the lack of steaks.

"There were two parties in line waiting for steak. Somebody had cut in front and then started being picky and finicky about the steaks and taking too long," Becker said.

"Then somebody else spoke up and said something, I guess, said something I guess the other party didn't like. Then, it just looks like it turned into an all-out brawl."

Another friend of Becker, Gavin Laulette, said he heard the same details; that the restaurant ran out of steaks and a brawl ensued.

JK Hospitality, The Golden Corral franchise, released a statement regarding the incident, according to Fox 19.

"Thankfully, no serious injuries have been reported. The safety of our guests and co-workers is our top priority," the statement said.

Becker claimed that his friend, who works at the restaurant, can be seen attempting to break up the fight and suffered some injuries for her efforts.

"My friend, she's in the video trying to break it up, and she told me she got hit by a table and her ankle got bruised up pretty bad," he said. "Pretty scary stuff[…] I've never seen nothing like that in Golden Corral before."

Newsweek has contacted Golden Corral and the Bensalem Police Department for comment. 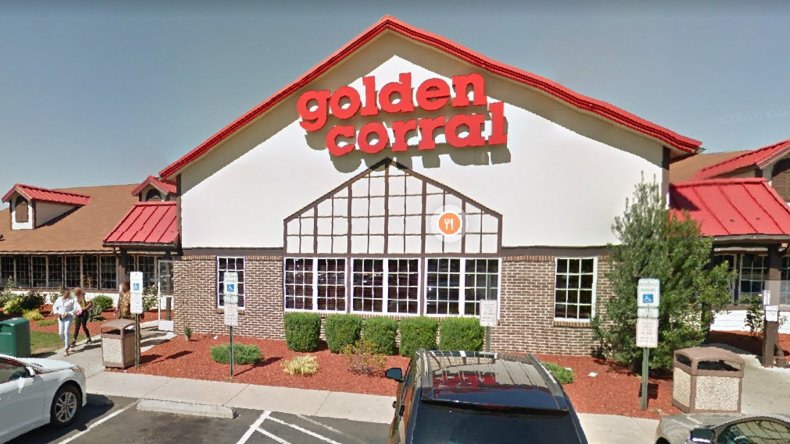