Police are investigating a massive brawl that broke out at a Golden Corral restaurant located in Bensalem, Pennsylvania. The fight started between two customers regarding a piece of steak. The Bucks County Courier Times reported that more than 40 people ended up getting involved in the brawl.

The fight reportedly broke out at around 4.30 PM last Friday. It left the dining room heavily damaged, and people were fleeing for safety.

The original video of the fight was more than 3 minutes long. It captured people at the Buffet & Grill restaurant in the 1400 block of Street Road, shouting and screaming at each other.

Customers reportedly used chairs and tables, attempting to throw them at each other. Several customers were seen running around in chaos.

Kayla Ruggiero, the woman who originally posted it on Facebook, has now removed it. The video has been shared more than 1000 times since then. It contained graphic language as well.

Why did the fight at the Golden Corral restaurant take place?

CBS Philadelphia reported that the fight amongst the customers started when the Golden Corral restaurant location ran out of steak. One customer also got his steak before someone else, leading to a brawl.

Alexis Rios, a witness who was present at the restaurant, said:

“[The chef is] trying to understand what you want and give you what you want. I had a rare steak, which is a lot faster to cook than a well-done steak. That's why I got my steak first."

Video has emerged from a massive brawl Friday at a Golden Corral restaurant in Bensalem, Pennsylvania. Police say the 40-person melee started when the buffet ran out of steak. Meanwhile, the owners admit that, in retrospect, Unvaccinated Eat Free Night was a bad idea. 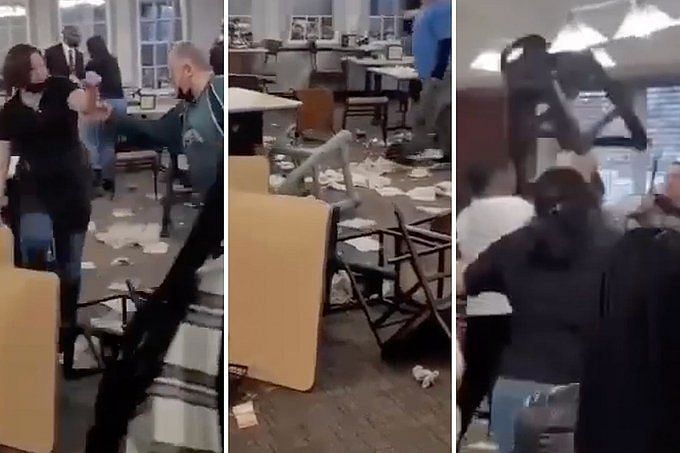 Video has emerged from a massive brawl Friday at a Golden Corral restaurant in Bensalem, Pennsylvania. Police say the 40-person melee started when the buffet ran out of steak. Meanwhile, the owners admit that, in retrospect, Unvaccinated Eat Free Night was a bad idea. https://t.co/8cVoJDIdxp

Customers were masked, making it hard to hear each other, leading to them shouting at each other and eventually escalating the fight. People began tossing their chairs. Rios added:

Two people were reportedly injured once the event took place, with some others bleeding as well. Rios’ brother, who was at the restaurant with him, also got a black eye following the brawl.

“We notified the local authorities, and they are investigating the incident. Thankfully, no serious injuries have been reported. The safety of our guests and our co-workers is our top priority."

No arrests concerning the fight have been made so far. People will potentially be booked for assault and disorderly conduct.