Looking out from a flat, elevated square marked with dusty footprints, Jimmi Conway points toward a slender oasis in an expanse of tire-tracked sand, the pings of a bustling construction site echoing in the background.  Four bunkers stand in line from left to right, their wavy edges framed by strips of green sod.

"I can see this becoming the signature hole," Conway says.  "Picture what this will look like when it's all grown in."

Off to the right are the bare bones of a tumbling fairway, though all that's recognizable to the unfamiliar eye, at the moment, are three more sodded bunkers leading the way to a future green.

This square, possibly sometime next year, will be one of nine tee boxes at Heritage Spy Ring Golf Club in Setauket, soon to be the newest public course on Long Island and arguably the most ambitious public-golf project since Harbor Links was built on a reclaimed Port Washington sand mine nearly a quarter-century ago.  The tee will start players on the 145-yard seventh, and the downhill fairway will be the closer, the dogleg par-5 ninth.  Conway expects the high quality and appeal of these holes will leave Spy Ring's visitors counting down the days — or maybe minutes — until their next go-around.

Spy Ring, part of the newest residential development from Commack-based Heatherwood Luxury Rentals, is tentatively scheduled to debut in the second half of 2023 on the grounds of the former Heatherwood Golf Course.  Named as an homage to the Culper Ring and the Setauket area's prominent role in covert ops during the American Revolution, it will be a full-length nine that can be stretched as long as 3,300 yards.

For many of its nearly 60 years, Heatherwood filled a niche as Long Island's only 18-hole executive course.  The plan is for Spy Ring to also fill its own local niche — that of a modern, fun-forward nine-hole destination on par with others that have attracted design enthusiasts and curious golfers to places like rural Tennessee and suburban Florida.  There, imaginative architects took spent or outdated golf courses and spun them into darlings of the public-golf world with bold features, strategic design and a streamlined building process.  Conway and Heatherwood president Christopher Capece think they've captured the same formula on the north shore of Suffolk County.

"This has a chance to be something special and unique for Long Island," Capece says.  "I think this is going to be up on the same level with Sweetens Cove."

Tyler Rae is the man behind Spy Ring's design.  Though young as far as golf architects go, Rae has a wealth of experience that includes work alongside Bill Coore and Ben Crenshaw (known locally for Friar's Head and East Hampton, of course), as well as Ron Prichard, Keith Foster and other acclaimed figures in the architecture field.  His resume is a laundry list of restorations and renovations of Golden Age courses, heavy on Donald Ross classics, with some Flynns, Raynors and Tillinghasts thrown in as well.  Spy Ring is one of his first solo designs, and he approached it with the heightened standards of Long Island golf in mind.

"Golf intellect is very high on Long Island," he says.  "You can't just come in with Mickey Mouse bunkers and flat greens and expect to have success.  Especially with a course like St. George's right down the street."

The enthusiasm for the project is hard to miss.  Conway, the longtime director and general manager at both Pine Hills in Manorville and the Heatherwood course, says working on Spy Ring has provided a jolt of energy.  Leading a walking tour on a sunny spring morning, Conway pauses to admire one of Rae's greenside bunkers at the par-3 fifth.  "Sometimes you walk around here and wish you could just spend the day with a bucket of balls," he says.  Capece stops on top of another perch to take in scenic views of rolling fairways and point out how the residences will blend into the course's background.  All in the group rave about Rae's use of open approaches, contoured greens and run-off areas.

For Rae, designing the golf course he envisioned and maneuvering it around the shared property was a challenge.  Initially he considered making the course a reversible nine, but that idea was scrapped over logistical concerns.  He opted to go with a clockwise routing that begins on the flattest part of the site, a "handshake," he describes, to ease players into the round.  Then Spy Ring "gets wild," beginning at #3, a straight, downhill par-5.  Conway says the third tee is "where the course really starts," kicking off a steady build of interest and excitement with each hole.

Pandemic-related delays turned out to benefit the construction process.  Rae and his team of builders had the time to personally shape every feature on the course to their exact specifications, so project costs remained low, a source of pride for the designer.  The crew also stripped off all the topsoil from the site, leaving behind nothing but sand.  ("Boy, it's going to be freakin' dry," Rae says with a laugh.)  The course will be seeded with turfgrass adapted for sandy, firm-and-fast golf, and a state-of-the-art irrigation system will keep everything in balance.  But golf balls will bound down fairways and roll over mounds, a rarity for Long Island publics.

"We set it up to be a turnkey firm-and-fast course," Rae says.  "Very easy to maintain."

On the greens, Rae's internal contouring and funneling leave surfaces that will be fun without going over the top, unique but with enough restraint to make them appear as natural parts of the landscape.  The green on #6, he says, is inspired somewhat by Seth Raynor's famous punchbowl at Fishers Island.  The seventh has elements of a volcano par-3, a hole type often associated with Ross.

"There's a ton of variety in the greens, and plenty of pinnable space," he says.  "Each one can play really easy or really hard." 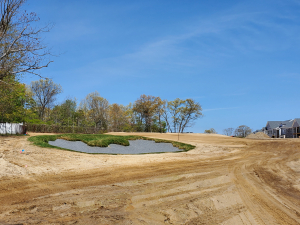 To the experienced Long Island public player, Spy Ring might bring back memories of Gil Hanse's now-departed Tallgrass Golf Course in Shoreham, particularly the openness of the entire property and the creative introduction of elevation to a largely flat site (in Tallgrass's case, a former sod farm).  Some might look at the bunkering on the par-5 ninth and draw parallels to #13 on Bethpage Black, where a center trap is farther from the green than it appears from afar.

Whatever comparisons and thoughts players have in mind when they walk off that ninth hole, Rae simply hopes fun is at the forefront.

"I want people to come off the course saying, 'I enjoyed those nine holes, and I can't wait to play them again.'"

[PICTURED — TOP RIGHT: View from the par-3 seventh tee; TOP LEFT: The par-5 ninth tumbles downhill before turning left for the final approach; BOTTOM RIGHT: After a flat start, Spy Ring brings elevation change into the mix starting at the downhill par-5 third; BOTTOM LEFT: The last of three fairway traps is farther from the green than it appears on the par-5 ninth.  The green is located near the trees at center.]