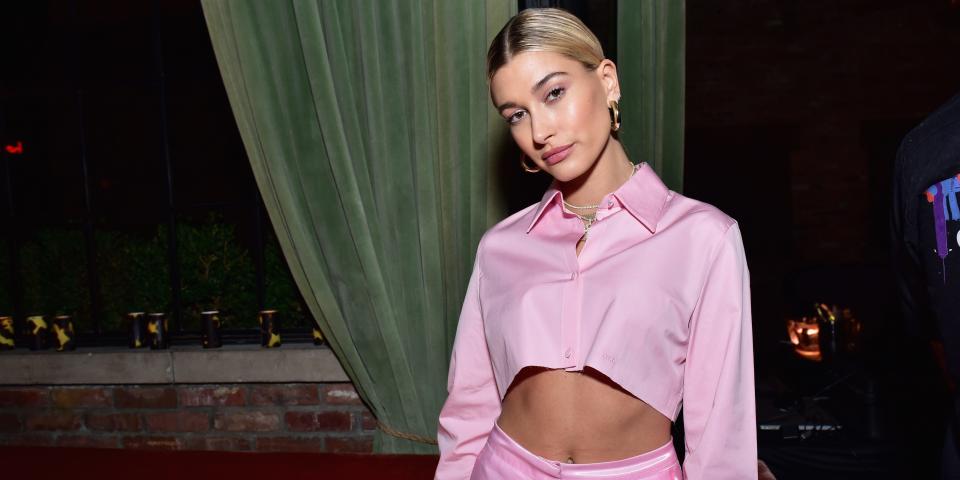 Hailey Bieber addressed a viral TikTok from last year that claimed she was rude to the hostess of a New York City restaurant.

The 24-year-old said in a YouTube video posted Wednesday that the viral TikTok "upset" her, and she was saddened to have left that kind of impression on someone.

The TikTok went viral almost a year ago, after Julia Carolan posted it in July 2020. Carolan, who says she was previously a hostess at a "fancy" Manhattan restaurant, rated her experiences with celebrities who ate there. In addition to Bieber, the video also referenced interactions with Bella and Gigi Hadid, Cameron Dallas, and Kylie Jenner.

"This is gonna be controversial," Carolan said in the video, which has amassed more than three million likes. "I've met [Bieber] a handful of times and she was not nice. I really want to like her but I give her, like, a 3.5 out of 10. Sorry."

Bieber commented on the video at the time and apologized for what Carolan called "not nice" behavior. "Just came across this video and wanted to say so sorry if I've ever given you bad vibes or a bad attitude," Bieber said in the comment. She followed up with another comment, saying, "Hate hearing that was your experience with me but glad you called me out on it so I can do better. Hopefully, we meet again so I can apologize in person."

The model discussed the viral TikTok in a sit-down with psychiatrist and mental health expert, Dr. Jessica Clemons, on her new YouTube channel. "I am not the same person I was," Bieber said in the video, titled "cancel culture, mental health and social media."

She then brought up the viral TikTok and said that while she "felt bad that that was her experience with me," the video also made her "kind of frustrated because you never know what someone's going through."

Bieber continued, "I wish I didn't act that way towards her. I'm a human and I made a mistake and I acted a way that was out of character for me. I acted in a way that I don't want to be. I'm trying to do better every single day. I want to continue to grow as a person. I'm open to people correcting me."

Still, the 24-year-old model added that she doesn't believe the people holding her accountable and correcting her actions "need to be people on social media."

Carolan posted a TikTok in response to Bieber's video, saying that she believes in "accountability culture, not cancel culture." The TikTok creator said she was sorry if her video affected Bieber's mental health – and commended her for speaking up about something that most celebrities "would sweep under the rug."

Read the original article on Insider