Read a brief summary of this topic

After the war, Packard became responsible for the company’s business, while Hewlett led its research and development efforts. Following a postwar slump in defense contracts, in 1947 Hewlett-Packard returned to the revenue levels of the war years and grew continuously thereafter through a strategy of product diversification. One of its most popular early products was a high-speed frequency counter that it introduced in 1951. It was used in the rapidly growing market of FM radio and television broadcast stations for precisely setting signal frequencies according to Federal Communications Commission regulations. Military sales during the Korean War also boosted company revenues.

To help fund the development of new products, Hewlett-Packard raised money by issuing public stock in 1957. In addition, it embarked on a long campaign of expanding its product line by acquiring companies, beginning the year after it went public with the purchase of F.L. Moseley Company, a maker of graphic recorders. In 1961 it began its climb to status as a medical-instrument manufacturer with the purchase of Sanborn Company. 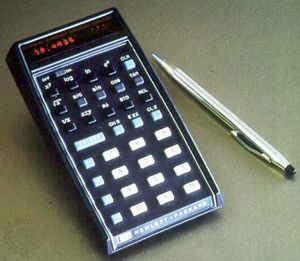 In 1964 Hewlett-Packard instrumentation gained international recognition in a technological publicity stunt. Company engineers flew around the world with its cesium beam HP 5060A instrument to synchronize the globe’s atomic clocks to within one-millionth of a second. Four years later the company introduced the first desktop calculator. In 1972, using advanced integrated-circuit technology, Hewlett-Packard unveiled the first pocket-sized calculator. Selling at one-sixth the price of the original desktop unit, the pocket calculator eventually forced the obsolescence of the venerable slide rule.

Although the company never developed weapons systems, it depended heavily throughout its history on military spending, because its instrumentation has been used to develop and test military products, particularly as weapons systems have become more dependent on electronic and semiconductor technologies. The military expertise of Hewlett-Packard was underscored in 1969 when U.S. Pres. Richard M. Nixon appointed Packard deputy secretary of defense, in which position he oversaw the initial plans for the development of two of the country’s most successful jet fighter programs, the F-16 and the A-10.

Early in the company’s history, the two founders endorsed formal management procedures, and Hewlett-Packard was one of the first corporations to use the “management by objective” approach. They also created an informal workplace, encouraging the use of first names among employees, even for themselves. Packard and Hewlett were also known for “management by walking around,” visiting as many departments as possible without appointments or scheduled meetings and talking with line workers as often as with managers in order to understand how the company was operating. Hewlett-Packard became one of the first businesses in the United States to endorse the idea that employees, customers, and the community have as valid an interest in company performance as do shareholders. As a result, it consistently ranked among the best places to work for women and minorities. It also became one of the leading contributors to charitable organizations, donating as much as 4.4 percent of its pretax profits.