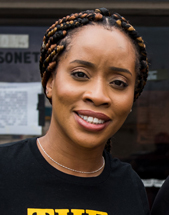 Nigerian-American-born Kavachi spent her early life inspired by her Nigerian culture, later completing her studies in marketing, hospitality management, and the business side of the food industry. In 2009, Kavachi moved back to her native Houston. She joined her mother, a chef who came to the U.S. from Nigeria. Together they introduced Nigerian cuisine to Houston’s thriving African community with her successful restaurant, Safari Restaurant. Opening in 1996, it is the first and longest-running African restaurant in the city. In 2011, Kavachi opened her own food business, a cafe called Peppersoup.

While attending the Hilton College of Restaurant and Hotel Management, she closed Peppersoup to concentrate on her studies. For her next venture, Kavachi created Grubido, a global food-oriented web resource whose mission was to expand Americans’ appreciation of international food – intending to take African food mainstream.

Grubido has been featured on Great Day Houston, 26 Fox News, Houston Life, the Houston Cookbook, and in No Passport Required for its innovative project, The Art of Fufu. The Art of Fufu elevates the homey art of making Nigeria’s staple comfort food, fufu, to a whole new level as Kavachi teaches audiences how to make, eat, and appreciate fufu and all its traditional trimmings. 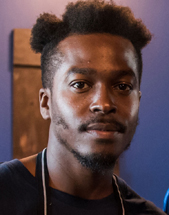 For chef Jonathan Rhodes, cooking is about the culture. A stint in Afghanistan while in the US Marines served as the catalyst for the now 28-year-old chef to attend culinary school at the Art Institute of Houston upon his return to the states. After working in several high-profile restaurants including Gramercy Tavern, The Inn at Dos Brisas, and Oxheart; Rhodes was inspired to launch the Jensen Chronicles — a pop-up restaurant serving dishes inspired by Southern African American cuisine. Named after Rhodes’ childhood neighborhood, The Jensen Chronicles not only helped Rhodes hone his culinary identity, but also served as motivation for the young chef to pursue additional education via a bachelor’s degree in history from the University of Houston-Downtown. Rhodes’ current venture — Indigo — is a culmination of these experiences. Making its debut in July 2018, Indigo brings a physical structure to the tastes of the Jensen Chronicles. Rhodes presents a trio of rotating five-course tasting menus that is meant to not only tantalize the senses, but also provoke conversation about the history, culture, and social experiences that have shaped and guided African American food ways. Rhodes has since earned a semi-finalist nomination for James Beard’s 2019 Rising Star Chef of the Year Award, while Indigo has earned top spots on Food & Wine, GQ, Eater, and Texas Monthly’s best new restaurant lists. From Jensen Street to Indigo, Rhodes mission is to continue advance the culture that inspires his menus, as they represent the sacrifice and beauty of the African American experience — born out of necessity, but curated with love and skill. He strives to continue to shed light on the social responsibility of food preparation. 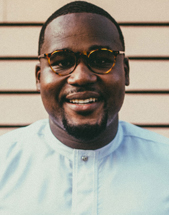 Growing up in Houston as a child of Nigerian immigrants and having direct ties back to his parents’ homeland, Ope Amosu personifies the Afro-American crossroads. In the midst of a successful career in the Oil & Gas industry, Ope is creating ChòpnBlọk, a contemporary, West African-inspired, restaurant concept that will serve as a cultural intersection where local communities and West African culinary traditions collide. Using food as its canvas, ChòpnBlọk provides an approachable solution to influence the often misinformed narrative surrounding the West African cultural experience. The concept uses its menu of Small Chops, Signature Bowls, Sips, and Sweet Endings to intertwine an assortment of storylines that highlight various West African nations, diverging from the traditionalist approach of solely focusing on a single country’s techniques. Ope is “in his bag,” pulling from his experiences working in large chain restaurants as well as his global corporate leadership experience at Fortune 100 companies, ensuring that ChòpnBlọk is poised for success. The squad is further driven by classically trained culinary creatives and homegrown West African home cooks who collaborate to develop creative recipes that are rooted in tradition, reimagined, and presented in a local, contemporary fashion. Paying homage to the Houston community, Ope and the team have been executing their Chòpd+Stẹ wd Kitchen Series, a highly-acclaimed pop-up dining program that has taken the city by storm. When it comes to Ope and ChòpnBlọk, it’s about more than food; it’s about ensuring that West African culture has a comfortable seat at the mainstream table.

Where Marcus Visited in Houston

Marcus Samuelsson is the acclaimed chef behind Red Rooster Harlem, Ginny’s Supper Club, Marcus at the Hamilton Princess & Beach Club in Bermuda, Norda Bar & Grill in Gothenburg, Sweden, and in 2017, Red Rooster Shoreditch in London and Marcus B&P in Newark. He has thrilled the food scene with a blend of culture and artistic excellence, first catching the attention of the culinary world at Aquavit. During his tenure as executive chef there, he received an impressive three-star rating from The New York Times, the youngest person ever to receive such an accolade. Continue Reading