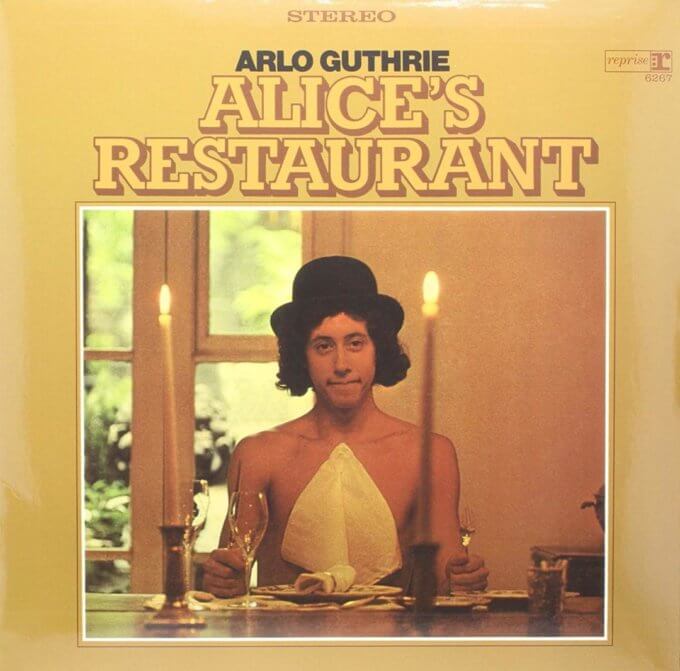 On Thanksgiving, radio stations around the country will play Arlo Guthrie’s 1967 “Alice’s Restaurant.” But why is this 18-minute song about littering and Vietnam considered a Thanksgiving song?

These interview highlights have been lightly edited for length and clarity.

Erin O’Toole: For those who aren’t familiar with the song, could you describe it?

Margot: “Alice’s Restaurant” is based on a true story of something that happened to Arlo Guthrie and his friend Rick Robbins, who is also a musician. They were home for Thanksgiving, and they were hanging out with their friend Alice – Alice is a true person – and they had a big Thanksgiving dinner at this church were Alice lived. She kind of made the church a sanctuary for people who were “of like minds,” that perhaps surrounded in a city by people who were not “of like minds” — my nice way of saying they were hippies and freaks. And so a lot of people would hang out there, and Alice had a big Thanksgiving dinner.

And Arlo and his friend Rick decided the next morning that it would be really nice to help Alice clean up. So, they did. They put everything they could fit into Arlo’s VW bus to take to the town dump… and once they got there they found the dump was closed. So they thought, “well, we have this VW full of trash; what should we do with it? Oh – here’s an existing pile of trash. We’ll just add it to that.”

What could be the harm?

Right. So that’s what they did. And the next day, they were visited by the Chief of Police. He cited them for littering, and they had to appear in court. And Arlo Guthrie was found guilty of this tragic offense of littering – and, interestingly enough, because he had a record, he was no longer eligible for the Vietnam draft. So, he never had to go.

Of course, this takes place on Thanksgiving, but it really doesn’t have anything to do with the holiday. Was this song originally considered something else? It feels like more of a protest song.

To be truthful, there wasn’t a lot of attention paid to the song at first. But then, Arlo was invited to appear on a radio station in New York called WBAI. Plays “Alice’s Restaurant” live. And of course, it’s 18 and a half minutes long… but people loved it! They thought it was the greatest song. And they started calling WBAI and requesting “Alice’s Restaurant.” The true title, I should add, is “Alice’s Restaurant Massacree” – and that’s how you say it.

What does that mean?

Arlo Guthrie explained it at one time. He said it’s “a series of absurd events.” So the Alice’s Restaurant movement is against absurdity and in favor of reason – and listeners loved that idea. What WBAI started doing was using “Alice’s Restaurant Massacree” as a pledge drive thing (because they’re a public, non-commercial radio station). “If you give us money, during our pledge drives, we’ll play (the song).”

I can’t think of one, really. People have been citing the Adam Sandler’s Thanksgiving Song…

Well, the “Thanksgiving Song” isn’t really, that’s not going to be a tradition on the Colorado Sound because it doesn’t touch people the way “Alice’s Restaurant Massacree” does. The idea – it’s such an absurd thing to have happened to these guys who were trying to do such a nice thing. And if you really think about it, one of the reasons we all know they were cited is because they were hippies, you know? And so I think that touches a chord with people. But I also think people like traditions. And Thanksgiving is nothing if not about tradition.

We found this interview with Arlo Guthrie talking to NPR in 2005, and here’s what he said about the song:

“It became an underground thing; not just here but everywhere, with guys on all sides of the struggles over there, and the struggles that were going on here. And it overcame, and it actually became, now, really – it’s a Thanksgiving ballad more than an anti-war this or a pro- that or whatever it was. And I think – it could only happen here.”

I thought it was interesting to get his take. What do you make of that, about this transition from a protest song to a Thanksgiving song?

I think Arlo Guthrie was really surprised by the success of “Alice’s Restaurant.” And as most songs do, they change with the times. Think of your favorite song – a song you truly love – and it meant something to you at one time in your life. Now think about how that song means to you 20, 30, 40 years down the road. The feeling, the kernel of that feeling is still there, but the idea of the song in your mind has changed just a bit.  “Alice’s Restaurant” is the same thing, and I think Arlo Guthrie (knew), when times change, songs can fit to the changing times.

And the best songs, I think, have these kind of all-encompassing lyrics where people can put their own meaning to it.

You can hear ‘Alice’s Restaurant’ at noon on Thursday, Nov. 28 on The Colorado Sound.

This conversation is part of KUNC’s Colorado Edition for Nov. 27. Listen to full episodes here.