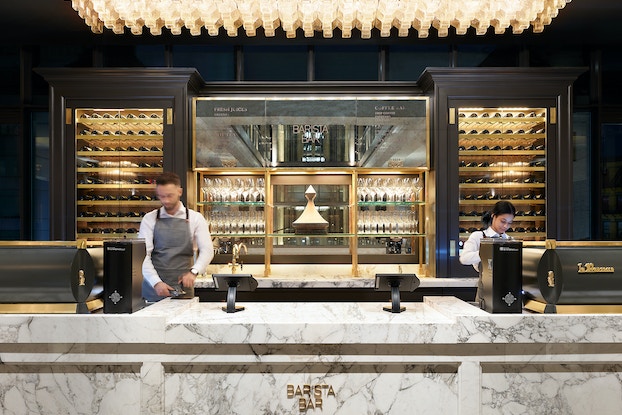 One of the busiest spots for brunch in Manhattan’s trendy Meatpacking district is located on top of a furniture store.

This isn’t just any furniture store, though. It is the 90,000 square-foot RH New York, one of the flagship showrooms of the retailer formerly known as Restoration Hardware.

The store, which opened in the fall of 2018, was built to be a monument to both interior design and dining, with 10,000 square feet of prime real estate on the roof set aside for a restaurant.

There’s also a coffee bar and a wine bar on the third floor, and restaurant guests can browse the store, wine glasses in hand, while they wait for a table.

On a recent September Sunday afternoon, only about a dozen people were looking at furniture in the five floors of showrooms. In the rooftop restaurant, all 100 seats were filled, and four dozen people were waiting for a table. On that Sunday, many more people were buying $20 avocado toast and $24 burgers than the $5,000 sofas and $1,200 side tables in the store, and RH is totally ok with that.

RH believes that today’s brunchers are tomorrow’s furniture buyers and that “hospitality” – the term it uses for the coffee counters, wine bars and restaurants it’s installing it its stores – is a key ingredient in its brand strategy. 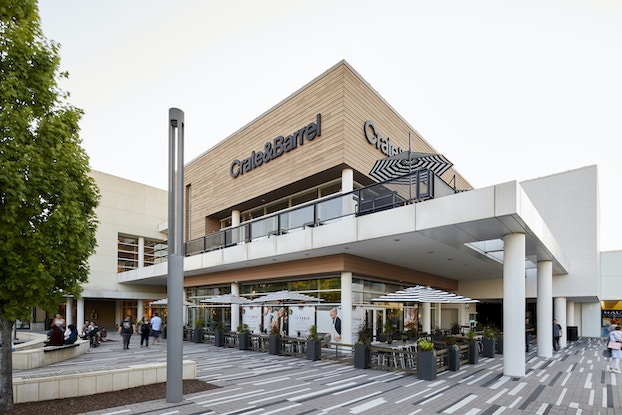 The Table at Crate made its debut in Chicago in the summer of 2019, and has proven so successful that the retailer plans to open 10 to 15 more restaurants in other locations. —

Not only do the restaurants generate millions in sales, but they have boosted furniture sales when they have been added to stores. The RH New York store, which opened a year ago, is on track to do about $112 million in annual sales this year, Friedman said on the call.

RH currently has seven stores with restaurants, including RH Minneapolis, which opened September 27, and it is preparing to open a store with a restaurant in Columbus, Ohio. It plans to add restaurants to existing stores in Atlanta, Tampa, and Denver.

Another luxury furniture and housewares, Crate & Barrel, opened its first in-store restaurant, The Table at Crate, in a Chicago suburb this summer. It proved to be such a hit that CEO Neely Montgomery announced in September that Crate plans to open 10 to 15 more restaurants in its stores.

RH and Crate & Barrel have put celebrity chefs in charge of their restaurants and given them creative control over the menu.

When Nordstrom opens its flagship New York location in October, it will have six restaurants, including the appropriately named Shoe Bar, a cocktail bar and restaurant in the shoe department.

Lululemon’s 20,000 square-foot flagship store in Chicago, which opened this summer, has, in addition to a yoga studio and meditation room, a restaurant, Fuel, that serves acai bowls and smoothies along with burgers, salads, and cocktails.

Food is a common denominator. Putting food in the retail environment gives people another experience to interact over.

Many retailers are incorporating restaurants into their offerings in order to redefine the shopping experience and keep customers in their stores. Read on for more tips on how to spark innovation.

Experiences that can’t be ordered online

Now, more and more retailers are deciding restaurants once again are essential.

Retailers of all kinds, from luxury brands like RH and Tiffany, to youth-focused merchants like Urban Outfitters, are turning to restaurants both to attract shoppers and keep them in stores longer, and as a way to fill available store space no longer needed to display products.

Restaurants also fill the demand for experiences, and they sell something that can’t be ordered online and delivered in a box.

“Yes, DoorDash can bring you food, but the experience of hospitality will never be replaced by the internet,” Adam Williamowsky, director of restaurants at Streetsense, a design and strategy group based in Bethesda, Maryland, told CO—.

“What’s happening is non-food retailers are now understanding the hospitality approach to retail, and that it’s not just shelves and racks of merchandise. It’s more of how you interact with that guest and what type of experience are you providing them,” Williamowsky said.

“Food is a common denominator,” he said. “Putting food in the retail environment gives people another experience to interact over.”

Restaurant sales have grown by 46% this decade, to an estimated $863 billion this year, according to the National Restaurant Association’s 2019 State of the Restaurant Industry report.

Research firm Statista reports that food and drink sales at “retail-host” restaurants — restaurants in stores — increased from just under $30 billion in 2009 to an estimated $42.3 billion in 2017.

During the heyday of city department stores, retailers often operated the restaurants at a loss, because they were considered to be the key to keeping female shoppers in the store for a full day of shopping, back when department stores were multi-storied, miniature cities, with departments for everything someone needed to buy, department store historian and author Michael Lisicky told CO—.

When the old department stores closed, customers often mourned the loss of the restaurants and the tea rooms more than the stores themselves, Lisicky said. “It shows the role they played socially, as gathering places,” he said. 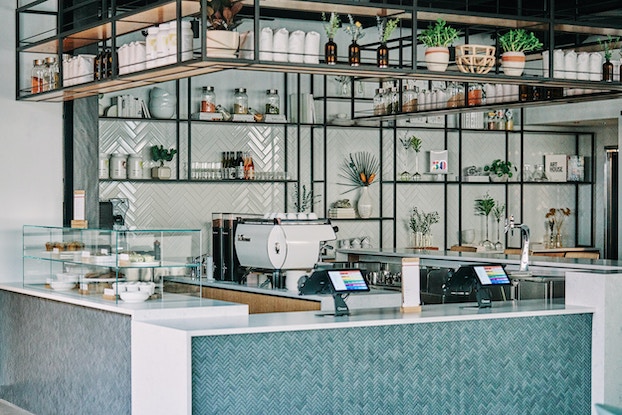 The department store restaurants were put in so the shopper wouldn’t leave, said Lisicky, who has written 10 books about legendary department stores, including Wanamaker's, Gimbels, Bamberger's and Filene's.

Now, he said, “whether it be a Neiman Marcus or Restoration Hardware, these restaurants are designed to pull people into the store. So it’s kind of the reverse” of the old model.

The new showplace retail restaurants appear to be achieving that goal.

Location analytics firm Placer.ai studied traffic at the new Lululemon flagship in Chicago with a restaurant, and found that the number of visitors was significantly higher than a traditional Lululemon store, and that traffic was higher during off-peak hours as well as peak hours. Placer.ai also found that visitors to the new store spent 16% more time than at another high-performing Lululemon in Chicago.

Advances in retail supply-chain management have helped feed the retail restaurant trend, Paco Underhill, founder of retail and consumer behavior firm Envirosell and author of Why We Buy: The Science of Shopping, and other books, told CO—.

Technological advances in supply-chain management allow retailers “to showcase the same amount of goods in a much smaller space, because they don’t have to use the store for storage,” Underhill said. “What this means is there are many merchants that are looking at the excess space inside their stores and saying, ‘What can I do with this?’ Putting in some form of food service makes a lot of sense,” he said.

The primary purpose of the RH store in New York City isn’t to sell furniture to New Yorkers, Underhill said (adding that “40% of what’s in the store wouldn’t fit into a typical New York City apartment”) but to serve as “a showroom to the world.”

The store, and the rooftop restaurant, serve as tools to introduce people, particularly tourists visiting New York City, to the RH brand, he said.

Shopping malls have turned to restaurants for the same reasons as retailers – the need to fill empty spaces, and the need to attract and keep shoppers, retail consultant Jan Kniffen, CEO of J. Rogers Kniffen Worldwide Enterprises, told CO—.

Malls, Kniffen said, used to build food courts as places where people could take a quick break before they went back to shopping. Now, the thinking of mall developers is more like, “We build these fabulous malls with these fabulous restaurants in them so people will go there and we hope they will buy something on their way out.”

CO— aims to bring you inspiration from leading respected experts. However, before making any business decision, you should consult a professional who can advise you based on your individual situation.

CO—is committed to helping you start, run and grow your small business. Learn more about the benefits of small business membership in the U.S. Chamber of Commerce, here.