"It's a beautiful day," Danny Trejo says as he's cruising through Los Angeles in a 1965 Buick Riviera while listening to Chicano Soul Shop Vol. 1, an album released by Trejo's Music.

Where is he going on this lovely Thursday morning?

"I'm heading to Hollywood to Trejo's Cantina on Cahuenga between Hollywood and Sunset," he says. "I'm a walking commercial."

Trejo laughs, but this is serious business. In addition to launching a record label, the tough-guy actor — known for films like From Dusk to Dawn, Spy Kids, Machete, and Bad Ass, as well as an especially memorable appearance in Breaking Bad — is building a formidable restaurant empire in L.A. He opened the fast-casual Trejo's Tacos on La Brea Avenue in March 2016 and has since expanded to three outposts in Santa Monica, Hollywood (which features a full-service cantina), and the Farmers Market. He's also got Trejo's Coffee & Donuts in Hollywood, where the flavors include Mexican chocolate, margarita (with a delightfully tangy glaze and lime zest), and nacho (made with jalapeno, chives, hot sauce, and cheddar) along with traditional options. In 2020, he also found time to pen "Trejo's Tacos: Recipes and Stories from L.A.: A Cookbook," and brew his own brand of Cerveza.

And L.A. brick-and-mortar restaurants are just the beginning.

"We're experimenting with a space in West L.A. where we don't have a presence," says Trejo's Tacos partner and co-founder Ash Shah. The West L.A. location is a Colony satellite kitchen that will focus on delivery orders. "Beyond that, we're looking to take this outside of California," Shah says.

A partnership with Live Nation resulted in Trejo's Tacos being served at 21 venues around the country in 2019. Trejo's is looking at the possibility of opening restaurants in cities including Dallas, Houston, Denver, Phoenix, and Salt Lake City following several successful ghost kitchen pop-ups in Chicago, Dallas, and Miami in 2021. Shah also says he'd love to have a restaurant inside a Las Vegas casino. Beyond the licensing deals Trejo's has with Live Nation and at its location in the LAX airport, "everything else will be company-owned or at least partially company-owned," Shah says.

Danny Trejo isn't looking to start a franchise business. He wants everyone to know that he's all-in with Trejo's Tacos, which he sees as a way to improve how the country eats. 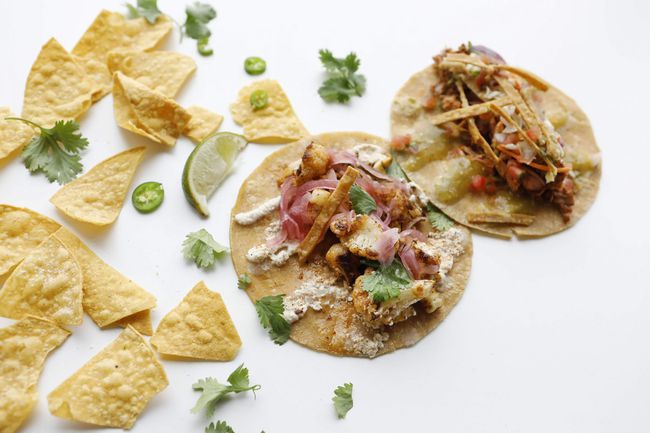 "Let's be real, big business don't give a shit about our kids," he says. "You see fast food like McDonald's and Jack in the Box all over poorer neighborhoods. You won't see that many in affluent neighborhoods. We have an obesity problem at our schools. We give our kids junk food instead of vegetables. I'm sorry, I sometimes get on a soapbox. But I see all these Latino kids and African-American kids that have three hamburgers and are obese."

Trejo understands that children like Big Macs. He also knows that a lot of people take their kids for fast food because it's easy, inexpensive, and fun.

"I was a single parent," he says. "I get it. You take your kids to McDonald's to play on the swings. I'm as guilty as everyone else. I'm not saying I'm better. But thank God we can do something that's healthier at Trejo's. Let's lighten things up."

Trejo has had several health scares including liver cancer and bleeding in his brain, and he believes changing his diet helped him recover. Now, he's committed to offering better food for the masses.

Trejo's Tacos and the associated Cantina are "selling an L.A. lifestyle," Shah says. The restaurants are all about mindful Mexican cooking that's boldly flavored but won't weigh you down. Respected L.A. chef Daniel Mattern (who went on to open Friends & Family with Roxana Jullapat and Shah) consulted on the original Trejo's Tacos menu, and the restaurant group's culinary team has kept things fresh ever since. You'll find verde slaw, a citrus marinade, and pepita pesto on the steak tacos. There are taco and burrito fillings like excellent Baja-style cod, spicy shrimp, and a righteous Mexican/Indian mash-up that's essentially chicken tikka with rice, pico de gallo, and mint escabeche cream. There are plenty of vegan options, including tacos with cauliflower, young jackfruit, and asada-style mushrooms. There's no lard in the tortillas, beans, and rice, which are all vegetarian-friendly. The horchata is sweetened with dates, and other refreshing beverages include kombucha, as well as strawberry-lemon and guava-lime agua fresca.

Trejo's Tacos and Trejo's Cantina also use plant-based Beyond Meat. The Trejo's Beyond Asada, which works especially well in a cheese-free vegetarian burrito with rice and beans, might not exactly remind you of grilled steak, but it does indeed resemble big, nicely seasoned chunks of ground beef.

"It tastes just like meat," Trejo says. "I love it. I'm going to have some right now with my eggs and I can eat for free."

In addition to being an enthusiastic frontman for his restaurant business, Trejo made headlines for being an L.A. hero on August 7, 2019, when he helped rescue a young boy from a car that had flipped over during an accident in Sylmar.

"I think everyone would have done it," Trejo says matter-of-factly. "First responders do it every day. I just happened to be around." 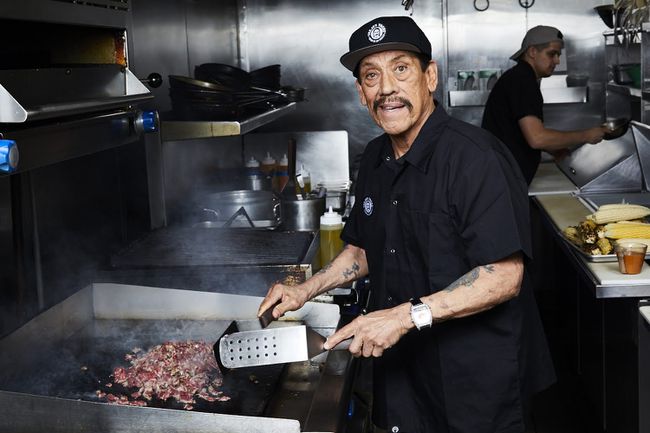 Trejo, though, recognized something that others might not have during such a nerve-wracking moment. He realized the boy was a special-needs child. Trejo has encountered a lot of special-needs kids because the mother of his children is an attorney who advocates for public-school students with developmental delays. So Trejo, knowing that some special-needs children don't like to be hugged, told the boy in the car that it was time to use their "superpowers." The boy got excited, and he and Trejo started yelling "superpowers." They both continued to scream excitedly, and Trejo grabbed the boy out of the car.

"I just think God put me there," Trejo says. "I kind of know how to deal with a special-needs child."

While Trejo says he was just reacting to something he happened to witness, he often puts himself in situations where he can help children, visiting schools and talking to junior-high and high-school students about the mistakes he's made. He'll candidly reveal that he used to be an alcoholic. He'll rant about how many liquor stores you'll see in poor neighborhoods like South Central. He'll admit to being a former drug user and a former criminal who robbed places and ended up in prison.

Trejo isn't telling students about his sordid past to glamorize his life. He's doing it because he knows there's a chance they're actually listening to him, so he'll also talk about the perils of drug use, unprotected sex, and falling in with the wrong crowd.

Trejo, who was born in L.A.'s Echo Park neighborhood, believes he has a duty to visit schools.

"Listen, I think God's given us this platform and this notoriety," he says. "I'm a firm believer that we should start teaching kids about drugs, sex, and teenage pregnancy at younger ages. It's important to talk to kids. A lot of celebrities don't do it because they're so busy. None of them are as busy as me. I've got eight restaurants, a record company, and a movie career. Don't talk to me about busy. I'll slap the shit out of you."

Trejo laughs deeply. He says provocative things because he knows that's what gets his message across. 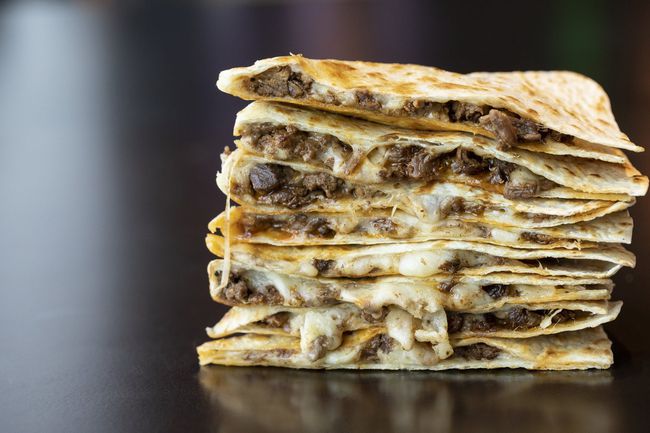 Trejo is at an age where many people are enjoying retirement, but he's just getting started. He recently released a cookbook. He's got his own lines of hot sauce and coffee that are sold at his restaurants. He can't taste his own beer because he's been sober for 50 years, but he says he's got taste-testers he really trusts. Trejo has also partnered with a licensing firm with the goal of getting products like chips, salsa, beans, cheese, rice, and frozen burritos into supermarkets.

Trejo and his partners won't be opening cookie-cutter restaurants around the country. Instead, they'll adjust to each market, which might, for example, mean playing around with chili or queso in Dallas.

"We may give customers in Texas the option of ordering everything on a flour tortilla," Shah says.

Trejo is confident that his brand of mindful Mexican restaurants will do well in other cities.

"Look, it's simple," he says. "All these fast-food restaurants are targeting our kids. But I've seen a lot of smart kids eating our food at Trejo's. We have one restaurant across the street from USC. I've got to say, the customers there are some of the happiest kids I've ever met."

"It's obvious," Shah says of Trejo's value as a business partner. "There's plenty of Mexican restaurants. Having Danny helps us cut through the clatter. He's one of those guys who, whether you're 6 or 60, he's just cool. He gives us all the intangibles a normal restaurant could never get."

When I visit Trejo's Coffee & Donuts, a customer asks the cashier if Trejo ever comes by and is pleased to hear that the answer is yes. Then, the guest sees a Trejo's insulated tumbler and happily buys it along with some coffee and donuts. Nearby at Trejo's Cantina in Hollywood, there's a colorful mural of Trejo where a lot of selfies have been snapped. It's a Saturday afternoon when I pop by, so there are families with children here on another beautiful day in Los Angeles.