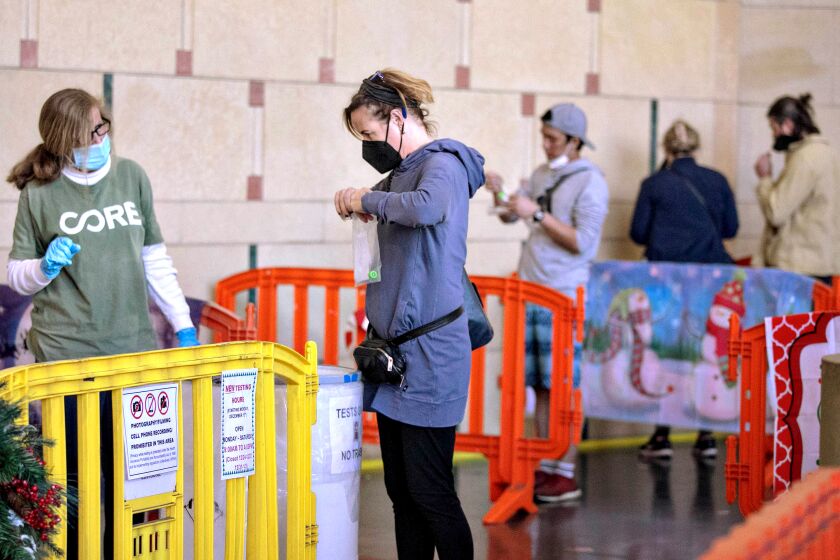 With the Omicron variant now spreading fast across California, is it still safe to dine out?

Public health officials have stressed they don’t intend to impose any new lockdown restrictions of the kind that were ordered last year, such as closing down indoor restaurant areas. Some cities, such as Los Angeles, West Hollywood, San Francisco and Berkeley, have instead imposed rules requiring customers to show proof of vaccination to eat in indoor dining rooms.

Overall, the decision on dining out comes down to a personal assessment of risk — something that could be affected by how old you are, your underlying conditions, local rates of coronavirus transmission and the effect on your family, friends and work should you become infected.

Infectious disease experts widely agree that outdoor dining is a much safer bet. Some doctors who haven’t eaten in an indoor restaurant since the pandemic began have eaten outdoors.

In some sobering examples of how the coronavirus can quickly spread, a Christmas holiday party at an indoor restaurant in Oslo left 80 of more than 110 attendees infected, most of whom are believed to have contracted the Omicron variant. Most attendees were vaccinated with two doses of an mRNA vaccine, and everyone had to show a negative test, taken one to three days before the gathering.

It wasn’t just attendees of that party who got infected, however. More than 60 other people who visited the same restaurant on the same night as the Christmas party also were infected.

In Marin County, at least 28 people tested positive after attending a holiday gathering at a restaurant; attendees weren’t wearing masks because a statewide indoor mask mandate had not yet taken effect. All guests were required to be vaccinated and provide proof of a negative at-home test the day of the party, and many guests had received booster shots.

Scientists now say it’s clear the coronavirus is airborne, and early data suggest it can hang in the air for an hour or two after an infected person leaves.

Getting vaccinated and a booster shot is generally expected to protect most people from severe illness and death. Still, officials expect more vaccinated people, including those who have been boosted, will get infected with the Omicron variant. Vaccinated people can still transmit the virus to others who may be more vulnerable should they get infected.

Infections are also disruptive, requiring people to isolate for at least 10 days following the onset of symptoms or a positive test.

So where does that leave indoor restaurant dining experiences that don’t involve parties in which multiple parties are mingling with each other?

In some parts of the state, patrons are required to demonstrate they’ve been vaccinated for COVID-19 before they’re allowed to dine indoors.

That’s the case in the city of Los Angeles, which last month began enforcing its mandate that patrons prove they’ve been vaccinated against COVID-19 as a condition of entering a host of indoor businesses.

Other jurisdictions, including San Francisco, West Hollywood and Berkeley, have similar rules. Oakland said it would adopt similar rules this week.

In either case, officials credited businesses with overwhelmingly following the rules to this point. Ferrer said this week that inspections have found more than 90% of visited bars, lounges and restaurants have been in compliance with the vaccine-verification requirements.