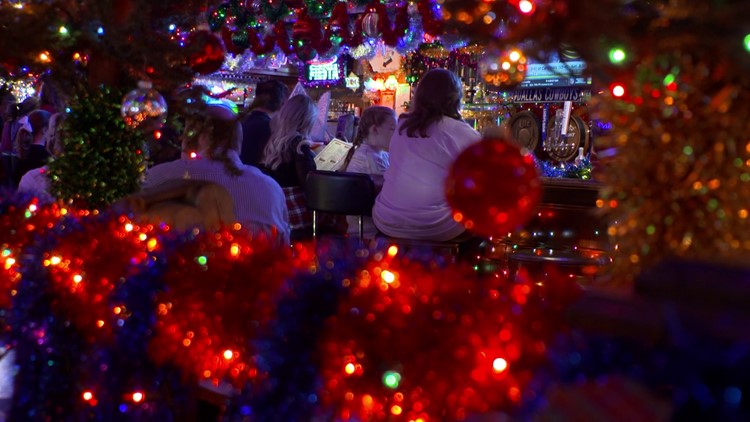 Example video title will go here for this video

Once you step inside, it’s a different story.

Campo Verde first opened in 1983. Every year, it is transformed into a festive world of color during the holiday season.

Everywhere you turn, there are floor-to-ceiling Christmas decorations.

On Wednesday, longtime-Arlington resident Karl Kirkpatrick visited the restaurant with his family for the first time.

“It is Christmas magic,” Kirkpatrick said. “It’s beautiful in here. You hear a lot about it, but once you get in here, you’re like… this is something unbelievable.”

In all, the restaurant has more than 500,000 dazzling lights, 55 Christmas trees, and more than 50 Santa Claus’ displays. A 260-ft. train track surrounds the entire restaurant.

The social media app TikTok made them want to visit.

General Manager Sadie McBee people are showing up like never before.

“We have apparently become TikTok famous,” said McBee. “It’s blown us through the roof… to the point where it’s almost like we can’t keep up anymore. We do, but it’s a long day for us.”

Anyone hoping to go should prepare to wait in a long line.

McBee said on average, people wait between two to three hours for a seat at the restaurant, and Christmas week is the busiest.

“We had a line out the door this morning, around the building, maybe 300 people waiting to get in before we opened at 11 a.m.,” McBee said.

Once you’re inside, the energy is indescribable. It seems customers don’t mind the long wait. Kirkpatrick waited two hours around dinnertime on Wednesday and said it was well worth it.

“I think that’s the best part… it’s just the happiness when they walk in and the expressions on their face when they walk through the door, 'cause it’s like nothing they’ve ever seen before,” McBee said.

She looks forward to it all year, and she’s sad the holiday season is coming to an end.

The good news? The Christmas decorations will stay up through mid-March.