With the Middleman Family Pavilion at Children’s Hospital of Philadelphia, King of Prussia now welcoming patients, there is renewed excitement around King of Prussia District’s 8th annual KOP Restaurant Week and KOP Shops for CHOP, taking place April 4-10, 2022. Presented by SERVPRO of King of Prussia, the dining and retail week has raised $220,984 for CHOP’s King of Prussia Campus since 2014.

KOP Restaurant Week features two-course lunch menus priced at $15, $20 or $25 and three-course dinner menus at $30, $40 or $50 from 21 of KOP’s fine dining restaurants. In addition, 12 of KOP’s fast-casual/quick service restaurants will offer deals and donation days throughout the week.  These generous restaurants, along with the 13 retailers participating in KOP Shops for CHOP, held concurrently, donate a portion of their proceeds to CHOP’s King of Prussia campus, which includes the Middleman Family Pavilion, CHOP’s Specialty Care & Surgery Center, and CHOP’s Urgent Care.

The fundraising efforts are not limited to only restaurants and retailers. King of Prussia District also collects donations from the KOP business community and beyond via their Community Champions for CHOP program. Charitable businesses pledge a donation of $300 or more, or host fundraisers of their own to benefit the beloved resource. Upper Merion Area School District will also support CHOP by hosting a district-wide pajama day on Tuesday, April 5th. 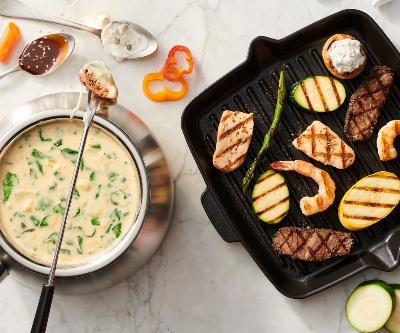 “What started as a simple restaurant week eight years ago has blossomed into a community-wide effort to support CHOP,” said Eric Goldstein, President & CEO of King of Prussia District. “Despite a difficult year, we are overwhelmed by the generosity of our business community. If ever there was a perfect time to visit King of Prussia for a great meal and world-class shopping, it is this week!”

KOP Cares: Raffle to Benefit Children’s Hospital of Philadelphia: March 17-March 31: King of Prussia District will kick off fundraising for CHOP with a Facebook fundraiser and contest.

Donors to King of Prussia Restaurant Week’s Facebook fundraiser will be entered to win a prize pack of restaurant and retailer gift cards and products valued at several hundred dollars. Virtual entries into the contest will be sold for 1 chance for $10, 3 chances for $20 and 10 chances for $50. King of Prussia District hopes to raise $3,000 through this contest.

Block Party for CHOP: Sunday, April 3, 1-4 PM at KOP Town Center: The day before KOP Restaurant Week and KOP Shops for CHOP kick off, King of Prussia District invites families to a day of fun and fundraising for CHOP. King of Prussia Town Center will shut down Main Street to make way for wandering characters, magicians, inflatable carnival games, fire trucks, face painting, music, balloon art and more. The Block Party is free and open to the public with a suggested donation of $5 per person. For each donation, families will be entered to win a raffle of gift cards and products.

Peppers by Amedeo’s Restaurant and Bar

Chick-fil-A King of Prussia (Outside Mall)

Bury the Hatchet King of Prussia