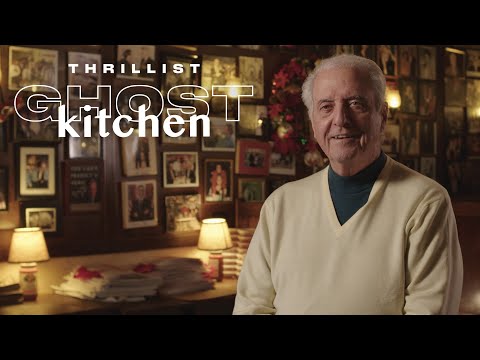 On a quiet corner of an East Harlem block, a dining institution founded over a century ago is one of NYC’s oldest restaurants and also the city’s hardest-to-book reservation, where seating is so exclusive and unattainable, that even its owners have no guarantee of securing a table. At Rao’s (ray-OHs), the legendary eatery serving home-style Southern Italian cuisine, it’s not about who you are, but instead, who you know. And it’s a good thing the current owners know exactly who to ask on the occasions they want to accommodate guests of their own: the regulars of Rao’s who possess all of the “table rights.”

However, Rao’s notorious booking system hasn’t always been a part of its operations. The spot debuted nearly 125 years ago, in an era when local breweries would set up taverns in various NYC neighborhoods in order to sell their beer. Charles Rao, an immigrant from Southern Italy, purchased an already existing, single-room tavern on 114th Street and Pleasant Avenue in 1896 from George Ehret Brewery, and established it as Rao’s. It wasn’t until the late 1950s, with the addition of dishes from family recipes originating from Italy added to its offerings, that the watering hole transitioned into a restaurant. And by the mid-1970s, a network of loyal customers began to occupy the six booths and four tables that comprise the small menuless dining room, enjoying items like the signature meatballs in a space reminiscent of a family gathering night after night.

Rao’s transformation into a culinary urban legend came in 1977, when a three-star review from New York Times food critic Mimi Sheraton lauded the “simple, honest, and completely delicious Italian food,” where other than the marinara sauce, “there is no precooking at all.” Putting Rao’s on the radar of food enthusiasts everywhere, the restaurant was inundated with bookings and reservation requests. “It changed overnight,” co-owner Ron Straci and grandson of founder Charles Rao, tells Thrillist, “and became a place everyone wanted to go to.” As a way of looking out for their regulars, Rao’s implemented a special system where those who had been devotees before the review would still be able to eat there without difficulty. 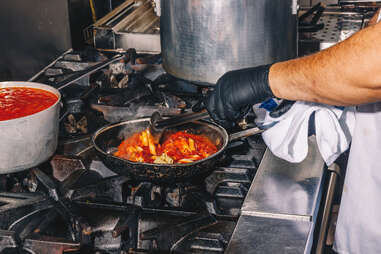 Photo by Cole Saladino for Thrillist

With the start of “table rights,” regulars were bestowed a standing reservation that could be passed down to their family throughout generations, making availability rare and it nearly impossible for the average person to just snag a table. On evenings when regulars weren’t able to use their weekly, monthly, quarterly, or even yearly, standing reservation, they could invite guests to take advantage of it instead, creating a time-honored NYC tradition of only being able to eat at Rao’s by knowing someone (who knows someone who knows someone) who was a regular. And for the owners of Rao’s, they too have to inquire with regulars to see if they’d be able to relinquish any tables on a given night.

Until COVID-19 hit earlier this year, this was how Rao’s operated for more than four decades: as a mythical dining destination few have experienced, but countless have fantasized about. However, like so many businesses since the spring, adapting during the pandemic has been vital, and after NYC restaurants were first forced to cease their indoor services this March, Rao’s closed for a single day and then pivoted to takeout—a first in its 124-year history—in addition to donating meals to frontline works and first responders in the city.

With their iconic dining room—strewn with Christmas lights year-round and walls adorned with framed photos autographed by its famous clientele—shuttered to guests since then (Rao’s opted not to relaunch indoor dining in September due to its limited space), one silver lining is, along with their regulars who continue to order from the restaurant, the general public has finally been able to get a taste of Rao’s cooking as well. 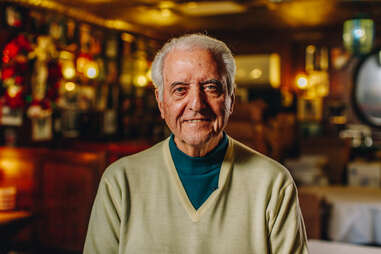 | Photo by Cole Saladino for Thrillist

“Everyone is happy we're doing it,” says Straci, “We've got someone almost every day that says ‘I’ve heard of your restaurant and tried to dine in it but haven't been able to—I'm so happy I can now try your food.’"

Now more accessible than ever, diners can order from the famed kitchen helmed by executive chef of 25 years, Dino Gatto, through Rao’s To Go or by texting 646-200-1787. And for those in the downtown Manhattan area, Rao’s delivery is now available through Thrillist Ghost Kitchen, a special series of restaurants in two-week residencies offering limited-edition takeout and delivery of their most beloved menu items from Dec 9-18.

Offshoot locations of Rao’s are now open to diners outside of NYC (Las Vegas opened in 2006 followed by Los Angeles in 2014), along with Rao’s Homemade, their popular line of packaged sauces and cooking products that launched in 1991. But the allure of the original uptown property still endures, especially with its much publicized onsite dining experience still out of reach to most. And the good news is, Rao’s plans to be around for another 125 years.

“I've never thought for a moment of becoming a former owner,” says Straci. “This is part of the family heritage and it will stay in our families for as long as there's a need for this restaurant to be open.”

When restaurants are allowed to operate back at a semblance of how they did before the pandemic, Straci hasn’t yet determined if Rao’s will continue to offer the dining options outside of the onsite experiences that are available now during COVID-19. “It depends. I really think that the size of the restaurant almost demands that we not do takeout at any great amount,” he says.

When asked if this is the opportune time for non-regulars of Rao’s to get a taste of their East Harlem kitchen’s cuisine, Straci agrees and quickly responds with: “They should do it now.”

Thrillist Ghost Kitchen will not only be the first time the majority of New Yorkers can get a taste of Rao’s famed cooking, but also the first time to do so via delivery.

Sign up here for our daily NYC email and be the first to get all the food/drink/fun New York has to offer.