(CNN) There may be a perk to this pandemic for New Yorkers: meatballs. And not just any meatballs but carnivorous spheres of goodness from an exclusive restaurant that most likely you wouldn't otherwise have tasted in your lifetime.

Yes, they're that exclusive.

Rao's, a New York Italian institution, is for the first time in its 124 years in business accepting take-out orders in response to the coronavirus crisis that has banned in-person dining at New York's restaurants.

The story of Rao's may sound as brash as the reputation of New Yorkers.

Rao's doesn't accept reservations. It's a one-room restaurant in Manhattan's East Harlem neighborhood, with fourteen tables and two evening seating times. Christmas lights are strewn across the room because as the boss at Rao's says, "Everyday in America is Christmas."

Oh, and you can only dine there if you know someone who owns — yes, owns — a table seating and invites you to dine with them.

A patron's right to a table "assignment" may be a once-a-year event or maybe once a month. For some lucky few, even once a week. Legend has it the "assignment" has even been passed down in people's wills from generation to generation. Patrons have reportedly included mobsters like John Gotti, to politicians like the Clintons and President Trump.

"I've come within knowing someone within three degrees of separation. Far enough that I would never be the person they choose to give their table to, like one person too far away," joked Jordan Lea who moved to New York from North Carolina and heard about Rao's from a co-worker. 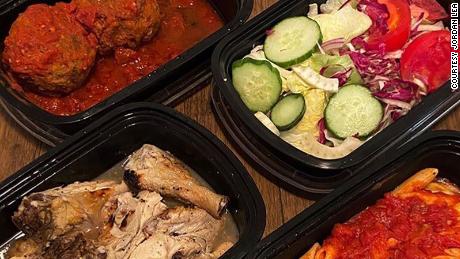 The Rao's takeout meal for two includes penne, lemon chicken, a salad, and, of course, the restaurant's famous meatballs.

Most people only get a taste of the restaurant's famous red sauce through its grocery store line of bottled sauces and dressings, which are sold at supermarkets in New York and around the country.

But as the world changed in the wake of the pandemic, so did how Rao's does business.

The day after a state order forced all restaurants to switch to take-out or delivery only, Rao's Executive Chef Dino Gatto said the restaurant staff sat down to figure out how to feed their regulars. They decided that offering a take-out option to other patrons was the way to go.

"We just came up with the idea not knowing that it would blow up the way it did, the response was overwhelming," Gatto told CNN.

So many people were interested in getting the food, the restaurant decided to launch its first Instagram page and listed instructions:

"Please shoot a message … with your phone number. Understand that you're being added to a wait-list and we will try to accommodate as many customers as possible during the pandemic." 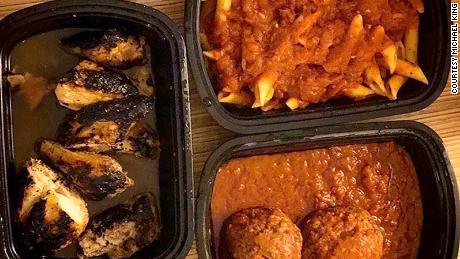 Michael King enjoyed a meal for two on his own.

It's a different approach than many other upscale and exclusive restaurants have taken in New York in response to coronavirus.

For example, famed Italian eatery Carbone, high-end Mexican spot Cosme, and the Michelin-starred Korean barbeque restaurant Cote are among a growing number of high-end New York restaurants that have joined food delivery apps like Caviar and Postmates — an unthinkable move for any of these restaurants where normally it's tricky to secure a reservation.

But at least you can get a reservation. That's not an option normally at Rao's.

Lea decided being on a wait-list for Rao's was still better than never getting to taste the food, so she quickly signed up.

Six days later, she got an exciting text message that she had been moved off the wait-list and could pick up the $80 worth of food later that day.

The two-person special, "A Taste of Rao's," is the only menu item Rao's is offering for take-out: Meatballs, penne marinara, lemon chicken, and a salad. Cash only. 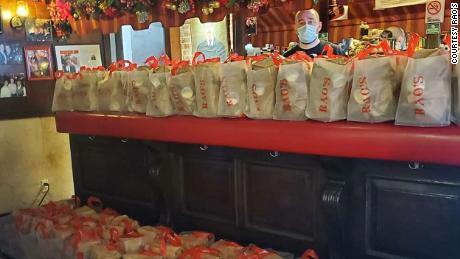 Rao's launched its takeout operation in response to the coronavirus crisis.

"I'm single, live with my dog, he (wasn't) getting any," Lea said, noting she hardly had leftovers.

Same for Michael King who is also living solo under the city's stay-at-home measures, and he eagerly joined the chorus of people posting their Rao's dinners on social media.

"I had leftover salad. I was very excited, and I was like, 'I can't stop eating this.' It was worth the minor stomachache I had."

The requests for the special are growing exponentially, as more people try to get in on a chance of eating a Rao's meal before city restrictions are lifted and everything returns to business as usual.

Gatto says the restaurant averages 85 take-out meals a day — made by less than half the staff employed during normal operations.

They use 75 pounds of meat to make meatballs a day. By comparison, that's how much meat they'd typically use in a month and a half.

"By the time this gets done, my arms are either gonna fall out of my sockets or I'm gonna need rotator cuff surgery after rolling all these meatballs," joked Gatto. 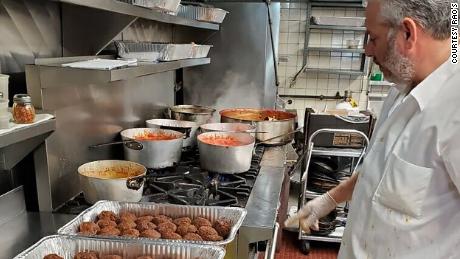 Rao's is also sharing its meatballs with those working on the frontlines. They set aside Mondays to make hundreds of meals for firefighters, police officers and healthcare workers at some of New York's hospitals.

"For those who can't get in here and it's a bucket-list thing, at the end of the day, it puts a smile on their face, Gatto said.

A small, only-in-New York silver lining during these unusual times.

"(I'll) never get that chance again," Lea said. "It's literally a unicorn meal."