What Is an Organizational Chart?

An organizational chart is a diagram that visually conveys a company's internal structure by detailing the roles, responsibilities, and relationships between individuals within an entity. It is one way to visualize a bureaucracy.

Organizational charts are alternatively referred to as "org charts" or "organization charts."

Organizational charts either broadly depict an enterprise organization-wide, or drill down to a specific department or unit.

Organizational charts graphically display an employee's hierarchical status relative to other individuals within the company. For example, an assistant director will invariably fall directly below a director on the chart, indicating that the former reports to the latter. Organizational charts use simple symbols such as lines, squares, and circles to connect different job titles that relate to each other.

Regardless of an organization's structure, org charts are extraordinarily useful when an entity is contemplating restructuring its workforce or changing its management complex. Most importantly, org charts let employees transparently see how their roles fit into the overall company structure.

For example, a public company typically shows shareholders in the highest box, followed by the following in descending vertical order:

Other job titles that may follow c-suite execs include:

Many formal organizations are organized hierarchically and can be shown in chart form. These include corporations but also nonprofits, governments, schools & universities, and the military (as the chart below illustrates). 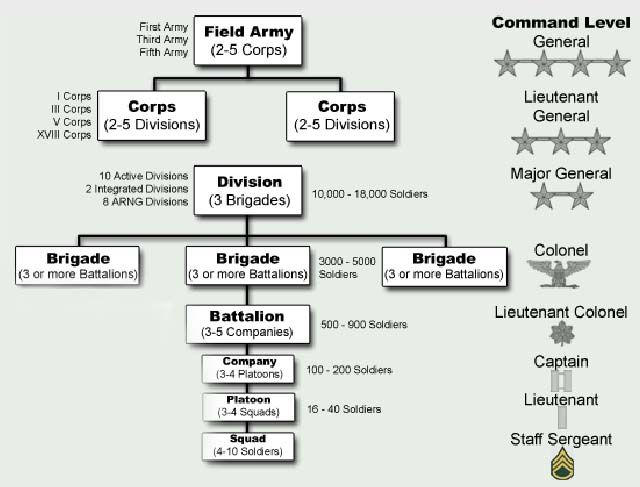 From Army to Squad.

There is no single correct way to fashion an organization chart, as long as it identifies the officials, employees, departments, and functions of the firm, and how they interact with each other.

Other Types of Organization Charts

What Should an Organizational Chart Show?

An organizational chart should visually show what the hierarchical status of a particular employee relative to other individuals within the company. For example, an assistant director will invariably fall directly below a director on the chart, indicating that the former reports to the latter.

What Are the Most Commonly Used Organizational Charts?

The two types of organizational chart formats that are most often used are hierarchical and flat. Hierarchical is the most common and it shows the ranking of individuals based on their role in the company in a descending vertical order. A flat format, also known as a "horizontal" organizational chart, places all individuals on the same level, and is indicative of an autonomous decision-making ability where this power is equally shared.

What Are Other Types of Organizational Charts?

Less commonly used, but still effective in defining roles, are the matrix and divisional organizational charts. The matrix organizational chart groups individuals by their common skill-sets, the departments in which they work, and the people they report to. It is dubbed "matrix" as it shows employees and teams interconnecting with more than one manager. Divisional would show the organization of a company based on some specific criteria, say a product line or geographical area. For example, an auto manufacturer might be organized based on the different types of products they offer.