BROCKTON – The pandemic has been devastating to small businesses across Massachusetts, forcing some to close for good.

Like many, the owner of Luanda Restaurant & Lounge in Brockton felt the uncertainty and wondered if that would be her destiny as well.

“Our biggest fear was shutting down and never opening up again,” said owner Amelia Goncalves at a press conference Wednesday, Feb. 23, at the restaurant where the Baker-Polito administration announced the launch of a new $75 million grant program to support small businesses in Massachusetts, such as Luanda, impacted by the pandemic.

The $75 million will be focused on small businesses that employ between two and 50 people, with $25 million directed toward businesses that did not qualify for previous Massachusetts Growth Capital Corporation (MGCC) grants because of a lack of revenue loss in 2020. 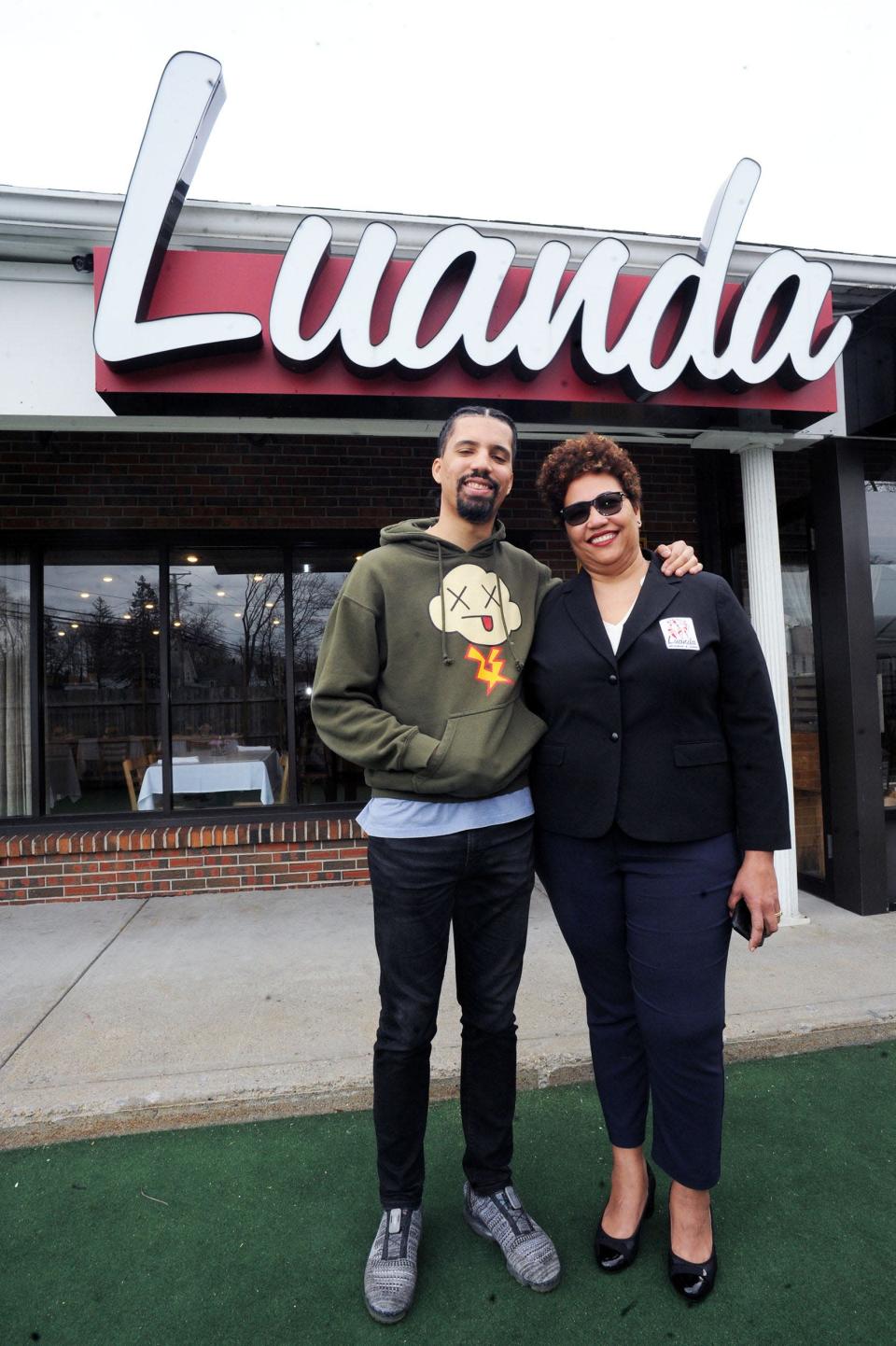 Jaysen Goncalves and his mother, Amelia Goncalves, co-owners of Luanda Restaurant & Lounge at 453 Centre St. in Brockton, are shown on Wednesday, April 7, 2021.

And $50 million will be directed to businesses that reach underserved markets and historically underrepresented groups, or are minority-, women-, or veteran-owned businesses, or are owned by people with disabilities or who identify as a member of the LGBTQ+ community.

Goncalves remembers the sacrifices she made early on to keep the restaurant afloat 18 years ago, including never celebrating Mother’s Day with her family because it was one of their busiest days of the year for the restaurant.

On a mission: Here's why Brockton father is on a mission to clean up dirty needles

Goncalves is so passionate about cooking and having a successful restaurant, she went without a vacation or a day off for seven years straight and worked 120-hour weeks to keep the business running smoothly.

Goncalves said the thought of the family business closing is her worst nightmare.

“No one knows how difficult it is to run a restaurant. It was so hard in the beginning, opening, and it hasn’t been any easier with the pandemic. The price of all the ingredients went up, items I used to get are now unavailable for months and the loss of guests because they’re too scared of the virus to go out,” Goncalves said.

Top earners: Which Brockton employees made the most in 2020? Here are the top 10 salaries

The new program is part of the plan signed into law by Baker in December to spend $4 billion in federal American Rescue Plan funding. Grants will range from $10,000 to $75,000. 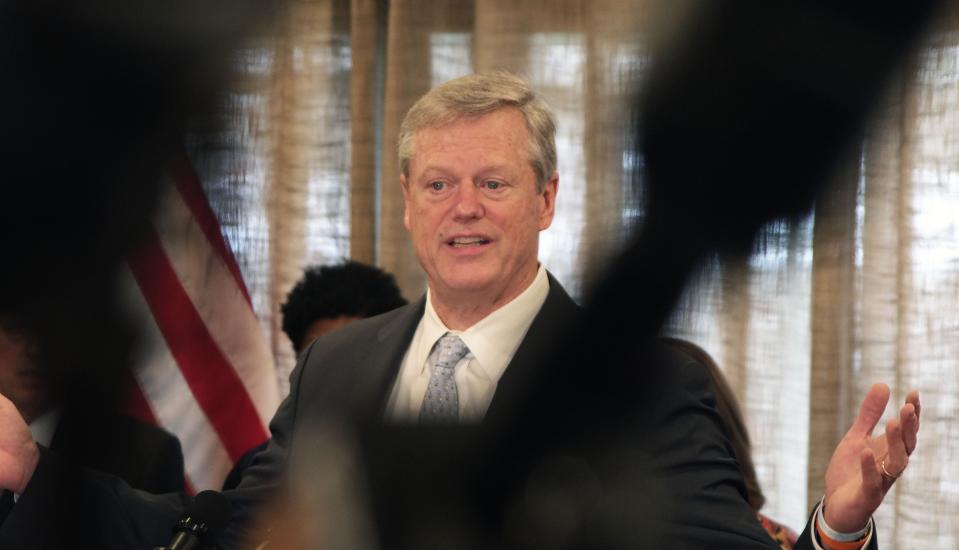 Gov. Charlie Baker speaks to the crowd. Baker, Lt. Gov. Karyn Polito and Housing and Economic Development Secretary Mike Kennealy were joined by Mayor Robert Sullivan and other officials at Luanda Restaurant on Centre Street in Brockton on Wednesday, Feb. 23, 2022, to announce the launch of a new $75 million grant program to aid small businesses, like Luanda, impacted by the COVID-19 pandemic.

It is modeled on MGCC’s COVID-19 small business relief program. Under that effort, MGCC oversaw the distribution of approximately $705 million to over 15,000 small businesses across Massachusetts.

“Restaurants like Luanda are fundamental to the character of our neighborhoods, main streets and downtowns in every city and town in Massachusetts,” Polito said.

State Sen. Michael Brady, a Brockton Democrat, is a fan of the restaurant’s Afro Portuguese and Cape Verdean dishes. Brady said his favorite entrée at Luanda is grilled chicken, a vegetable medley, rice and verde sauce.

Brady, who grew up in Brockton, supports the new grant program and understands how vital it would be for the economic growth of local businesses, he said. 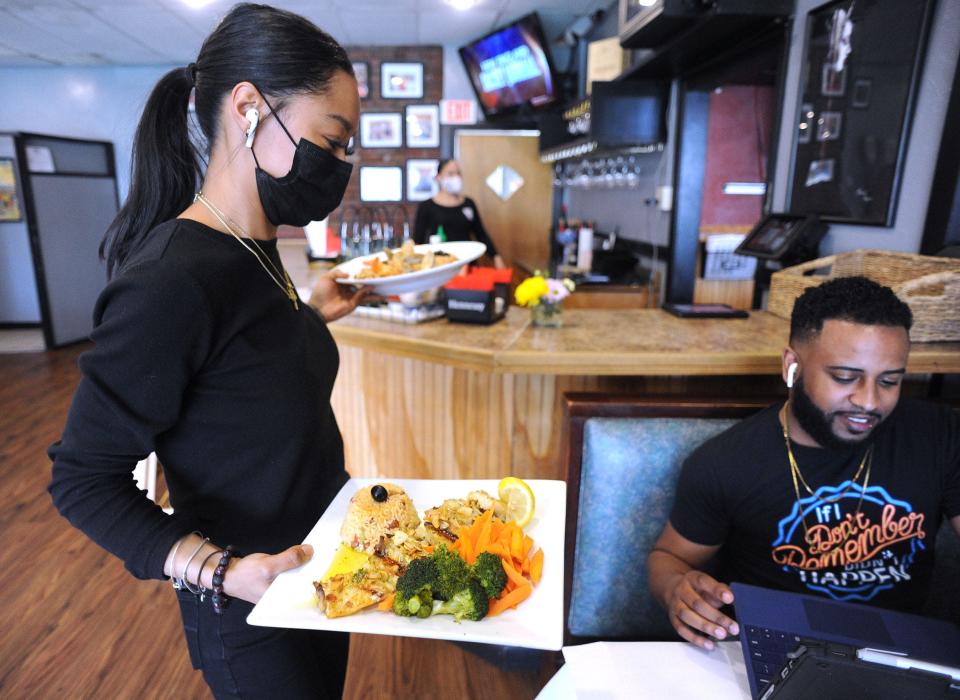 Mark DePina's food arrives at Luanda Restaurant & Lounge, 453 Centre St. in Brockton, on Wednesday, April 7, 2021. The restaurant has a diverse menu of food with a mixture of Afro-Portuguese influences.

Luanda received $75,000 last year, which gave the restaurant some relief and allowed it to update several areas, including grass patio seating.

“We are very thankful for having received the grant. It was very helpful during a very tumultuous time. The effects of the pandemic are still being felt, especially for a lot of small businesses like ours," said Jaysen Goncalves, Amelia’s son and co-general manager of Luanda.

"We know a lot of folks who had restaurants, and unfortunately, aid help didn’t arrive on time, and their doors remain closed until today,"

Jaysen Goncalves talked about "some of the wider-ranging effects” of the pandemic, such as “the supply chain, inflation, the prices of ingredients, the lack of income for many people.”

“We still feel it till this moment in the business,” Jaysen Goncalves said.

The family-owned restaurant hopes to receive the new grant and continue to serve the community of Brockton with food rich in heritage and culture.

To learn more about the grant, visit www.empoweringsmallbusiness.org.

Enterprise staff reporter Alisha Saint-Ciel can be reached by email at stciela@gannett.com You can follow her on Twitter at @alishaspeakss and Instagram at Alishaatv . Support local journalism by purchasing a digital or print subscription to The Enterprise today.