I’ve lamented the numerous NES titles that went largely ignored due to the 16-bit war heating up.  Most of these releases such as Shatterhand, Vice Project Doom, and Kick Master were released extremely late.  It is hard to get excited about admittedly awesome NES platformers when Teenage Mutant Ninja Turtles IV is vying for your attention.  But then there are the ones that everyone missed due to apathy.  I ignored Panic Restaurant due to its unassuming cover and thought it was a Burgertime clone.  Instead I missed out on a cool hidden gem that, while not spectacular, is thoroughly entertaining while it lasts.

Panic Restaurant is known as Wanpaku Kokkun no Gourmet World in Japan.  When it was brought to the West its protagonist Kokkun was redesigned, from a young hot blooded chef to the love child of Chef Boyardee and the Colonel.  Apart from that change you also attack with a frying pan rather than a goofy head butt.  But besides that both games are more or less the same.  Cookie, the owner of the restaurant Eaten, is knocked unconscious by his rival Ohdove (come on, it’s Hors D’Oeuvre) who also takes over his business. Instead of taking him to court Cookie decides to battle his mad army of living food to get his restaurant back.

The game takes its food theme seriously.  Each level is themed after a dish on a menu such as Meat, Fish, and Appetizer.  These themes generally inform the levels and enemies; fish takes place in a freezer and you will fight frozen treats.  It doesn’t tell the whole tale of course; Panic Restaurant can’t avoid some of gaming’s biggest tropes.  There are stages set in a sewer and forest but they can be excused since they are cool.

Since you are fighting food items gone bad it only makes sense that you will use kitchen utensils as weapons.  Cookie is armed with a frying pan that is functional but has short range.  You can also find a spoon that has a longer reach but slightly slow wind up, dishes for long range attacks and a fork.  The cool thing about each weapon is its manner of attack; the frying pan performs an overhead smash while the spoon is swung like a bat.  Cookie jumps on the fork to hop endlessly which is good for enemies but bad for platforming.  Taking a hit will reduce you to the pan but at least it works.  The rare cooking pot makes you invincible as you plow through enemies since you can’t see.  It’s a bit of humor that works. 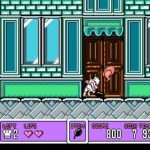 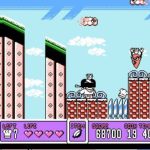 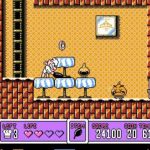 As ridiculous as the game’s concept may seem it does make for a pretty good platformer.  The assortment of enemies has specific behaviors and is placed in such a way that you have to take that in to account.  Shish kebobs dive bomb like missiles and are situated near ladders.  Roasted turkeys make mad dashes as soon as they are on screen while apples explode into many pieces, making it difficult to avoid if you are using the fork.  The bosses are just as silly.  There’s a mad popcorn dish, an ice cream cone and even an irate microwave.  There are patterns are simple to figure but tricky to execute, leading to some of the only instances of difficulty in the title.  Speaking of which….

Panic Restaurant only suffers from its brevity and easy difficulty.  The first level is a bit tricky since you only have two hearts.  But if you have been collecting the coins dropped you will max out your life bar by the second level.  At that point you can make a few mistakes and it becomes easier.  The game is well paced, with extra lives and life restoring food placed exactly when you will need it. The last two levels become trickier as the platforming element is ramped up.  But it is nothing you haven’t seen before.  There are only six stages and they end so fast it almost feels anticlimactic.  While Panic Restaurant’s brief length is a bummer it is fun while it lasts.

Panic Restaurant is the epitome of a solid game.  It isn’t complicated, doesn’t feature any innovative features but does what it does well.  It doesn’t reach the heights of Taito’s other late NES titles but it does not have to.  The only issue is finding it.  The game is exceedingly rare and while I like it don’t pay the exorbitant prices it goes for.