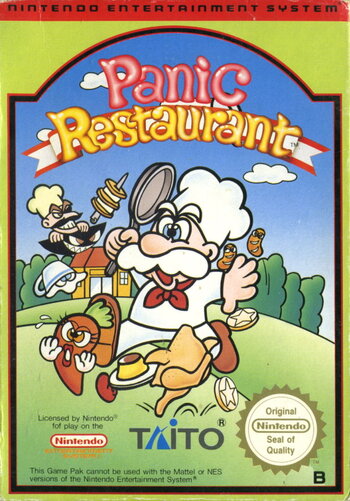 Panic Restaurant is a 1992 NES Platform Game by Taito.

You play as Chef Cookie, owner of the famous Eaten Restaurant. One day as he heading in, he finds out his restaurant has been taken over by the mysterious and evil chef Ohdove. Ohdove has now littered the restaurant with anthropomorphic food running amok. Cookie has to brave six stages and put a stop to Ohdove and get his restaurant back.

The game plays like a standard platformer as Cookie runs and jumps. He defends himself with his frying pan, but can acquire powerups like forks, throwable plates, and a spoon he can swing to attack enemies. Beating the enemies awards him with coins, which Cookie can play with in the slot machine bonus game at the end of every level.

Also of note: The Japanese version of the game is slightly different from the International Versions. While the game is mostly the same, it stars a completely different protagonist from Cookie: a younger kid-like chef protagonist who uses his head to attack enemies instead.

This restaurant contains examples of: