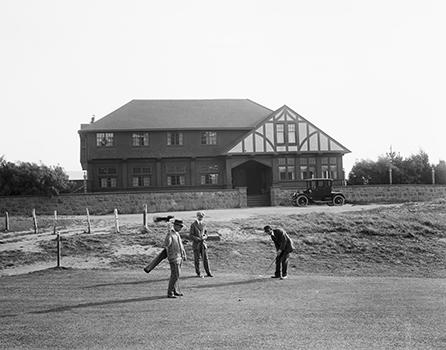 One of the oldest courses on the West coast, the Presidio Golf Course has a storied history.

It was built in 1895 when Colonel William M. Graham, the Presidio’s commander at the time, allowed a group of businessmen known as the San Francisco Golf and Country Club to create a nine-hole course within the post. Greens fees were just 50 cents. The Presidio’s signature trees were at first absent, since the huge stands of eucalyptus and Monterey pine had not fully grown in.

The founders hoped for a quick expansion, which the Army did not immediately approve. Many of the original members thus left the Presidio for a new course near Lake Merced. The remainder formed the private Presidio Golf Club (PGC), whose members were allowed the same “courtesies and privileges” that officers enjoyed. Though no one knows for certain what these privileges were, it is clear the relationship was amiable. The course was ultimately expanded to a full 18 holes in 1910.

Sometimes the course was called into service for non-recreational purposes. President Theodore Roosevelt reviewed the troops on the links in May 1903. Three years later, the course was used as a refugee camp for survivors of the 1906 earthquake.

An incident in 1912 threatened to destroy golf in the Presidio. Reportedly, an Army officer ordered two civilians off the green because they were not members of the PGC. The quarrel resulted in orders that forbade golf on the Presidio. Representative Julius Khan and Secretary of the Interior Franklin K. Lane interceded on the PGC’s behalf, and the Army eventually relented.

In 1913, the PGC took responsibility for course maintenance and management. Dues collected from both the PGC and the United Service Golf Club, whose members consisted of commissioned officers of various branches of the Armed Forces, helped to fund the total cost of operation. The club continued to grow, and so did the course. In 1920, the London golf architectural firm of Fowler & Simpson enlarged the course and installed a watering system. Thousands more trees were planted along the course in the 1930s when the Works Progress Administration built a tree nursery in the Presidio.

In 1956, the need arose for an automatic sprinkler system that would cost $100,000. The Army funded the repairs, but required that the PCG transfer operational responsibility for the course to the Army. Throughout the 1960s and 1970s, attempts were made to reduce or eliminate civilian membership. However, the spirit of unity and commitment to an agreement made decades before between the two organizations always prevailed.

When the Presidio became a national park site, the course was opened to the community, and a new public clubhouse was built in 1999. However, the private Presidio Golf Club still exists and operates its own clubhouse just outside the park. The building is so close that the awning over the front walkway hangs over the boundary, and a final step out places one on Presidio grounds.

With all the history echoing down its fairways, it would seem impossible to overlook such a significant piece of the Presidio. Yet, according to the book Defender of the Gate, the Army discovered in 1964 that the historic course had never been added to the Presidio’s list of real property. The omission was quickly corrected: “Item 71, June 30, 1964-Golf Course, 18 holes, 149.6 acres, built 1905 (sic), ‘Found on Post.'”

Presidio Golf Course has hosted some of the world’s most famous golfers. Babe Ruth, Bob Hope, Bing Crosby, Charles Schulz, and Joe DiMaggio played here. As Rosenbaum tells it in his book, the famously reclusive DiMaggio insisted on “crack of dawn sessions so his ‘crude’ attempts at learning the game were hidden from public view.” His friend Walter Frick described DiMaggio’s game as “good off the tee, but his second shots were weak and his short game inconsistent. Now I know why he never bunted… he had no short game.”