PMCs not only directly participate in battle, they also undertake a large variety of other military responsibilities, such as logistics, maintenance, and transport operations, acting as strategic and tactical advisers, and overseeing the training and education of local military assets. In order to comply with international laws, the position of PMCs is described as being different to that of mercenaries, and the term is often avoided due to the stigma associated with it.[1] The hiring of mercenaries is a common practice in the history of armed conflict. They are also sometimes referred to as an "Army without a country," in reference to the fact that they don't answer to one nation.[2] They can also be used to field test several in-development weapons when the military itself is constrained from doing so on their own terms.[3]

Nonetheless, PMCs do have their limits, however: PMCs cannot directly use state-of-the-art military-grade systems (for example, military-grade aircraft drones), especially on American soil, although they can get them launched by the military provided they possessed the right connections. In addition, PMCs are also required by law to have their contractors be fully informed about having to die in battle, including if the method of death was a built-in self-destruct device that activated when falling in battle.

The concept of a PMC market originated around the early 1970s, with Big Boss's development of Militaires Sans Frontières in 1972. Kazuhira Miller, MSF's subcommander, viewed the MSF in 1974 as being neither a mercenary group nor a foreign legion, but a new kind of business, and wanted to ensure that Big Boss's views on MSF were expanded upon in every way possible.

The PMC market was expanded upon by 1984, where they at the time were referred to as Private Forces. Ironically, a large part of their expansion and spread was the direct result of MSF's destruction by XOF nine years earlier. Survivors of MSF were later forced to become PFs and dogs of war shortly after MSF's fall, many times dying for no reason and with no banner, with demand being particularly high in the Angola-Zaire border region of Central Africa by 1984, for a variety of reasons including Cold War standoffs, tribal clashes, and resource exploitation. Miller, one of the people responsible for the development of the war economy and PFs in particular, later reflected that the whole concept had taken "a pretty crooked course" between MSF's fall and the Diamond Dogs' first visit to Central Africa.[4]

The modern PMC market developed with the end of the Cold War era, when a number of factors coincided to facilitate its rapid growth. With the end of the fifty-year standoff between the U.S. and the USSR, conflict became more diffuse and disordered. Many of the economic and social tensions that were exploited to fuel Cold War competition in parts of the Third World remained acute. Many postcolonial client states of the two superpowers collapsed into internal conflict with the absence of their former backers, especially in Eastern Europe, Africa, and the Middle East. The breakdown of state control in a number of areas produced new civil and ethnic conflicts. This caused an increase of small-scale conflicts all around the world.

The collapse of state institutions weakened their powers relative to non-state actors, "pav[ing] the way for ethnic mobilization, transnational criminal activity, warlords, rebels, and paramilitaries." Non-governmental organizations (NGOs) and multinational corporations (MNCs) who sought to operate in these areas could not rely on the weakened state apparatus to protect their operations, encouraging them to look to other sources for localized protection and order.

The large-scale decommissioning of forces at the end of the Cold War, as was the case in past conflicts, produced a global pool of newly unemployed individuals whose careers during the Cold War left them with a predominantly military-oriented skillset. One estimate puts this worldwide number at approximately seven million soldiers; in the former Soviet bloc and South Africa, entire units were dismissed from duty, including elite special forces, and the U.S. military shrank by a third from its wartime peak. This new pool of military human capital was complemented by the large-scale post-Cold War sale of surplus arms and materials, particularly in Russia and Eastern Europe. The growth in the global arms trade drove down prices on small arms — and even heavy weaponry — and made the instruments of warfare readily accessible to non-state actors.

PMCs predominantly operate in three battlespace zones: front-line command and combat operations; training and advisory programs; and logistical support services. It is considered more cost effective to contract PMCs than to increase national military budgets maintaining a national army, since it doesn't require spending on logistics, maintenance or buying state of the art weapons. Another advantage is that the PMC personnel that die in combat is not considered KIA, and thus are largely ignored by the public and the news media.

As a result, PMC-spawned "surrogate wars" spread across the world since the end of the 20th century. Also known as the 21st century's "surrogate Cold War," the increase of regional conflict and demand for PMCs helped companies rake in a fortune and gradually increase their military power, while an exodus of retired soldiers infused them with years of experience.

National militaries slowly weakened as their reliance on PMCs increased, with 60% of the world's armaments placed in the hands of private enterprise. Of the world's five biggest PMCs, two were located in the United States, with the other three located in France, Britain, and Russia. Their clients could be found mainly in America, Europe, Africa, and the Middle East. As a direct result, it also increased refugee rates as well as the hiring of child soldiers.

Profits from PMCs were infused back into the American economy, allowing the country to expand its own battlefield operations. U.S. capital followed the U.S. military wherever it went, leading to an expansion of American marketplaces. With war as the product, money flowed back into PMC hands, continuing the cycle. With mercenary wars where troops flock to the highest bidder, stable profit became the biggest concern, and the battlefield soon turned into another marketplace driven by greed. With many battlefields left in the hands of PMCs, and states concerned about their own security and profit, PMCs had become an essential entity on the world stage, thus giving birth to the so-called "war economy", just as the Patriots had wanted.

In tune with the war economy, numerous smaller and local scaled PMCs were also prevalent, such as in the Middle East, where private operators were hired as battlefield commanders and trainers for local militias. Most of these militiamen actually belonged to another PMC, where most of the local men turned to for employment out of desperation. The rebel army Solid Snake fought with in South America also managed to hire their own PMC for assistance.

Guns of the Patriots Incident

By 2014, the five largest PMCs all worked under a single mother-company named Outer Heaven, which was in turn ultimately headed by Liquid Ocelot. They were so large that they combined would rival the manpower of the U.S. military. Solid Snake initially thought they were the same as the mercenaries that he fought in the past when told of this, until Campbell told him otherwise.[5] Logistically, technologically, and tactically advantaged, they were deployed all over the globe with the use of high-end technology on the battlefield, and could come in and out of any conflict with minimal casualties. Minor PMCs were also involved in the war economy, such as those aiding the Middle Eastern militiamen and the South American rebels. The PMCs ended up crippled after the War Economy not only collapsed, but the Patriots' AI network also ended up destroyed along with SOP.

Warning: The following information is from outside Hideo Kojima's core "Metal Gear Saga." Its canonicity within the continuity is disputed, therefore reader discretion is advised.[?]

With the fall of SOP, the world's major PMCs have splintered into countless smaller entities sparking new conflicts around the globe. Some of the PMCs ended up becoming known as "Private Military and Security Companies." Some were involved in relief work for rebuilding a developing country that had underwent a massive civil war. Raiden ended up joining one of these PMCs, named Maverick Security Consulting, Inc. for VIP protection, military training, and other duties, as a means to support his family without having to return to direct combat. Another PMC, Desperado Enforcement LLC., primarily took missions for terrorists and criminals.

During their mission in the country, both Maverick and Desperado's paths had crossed and resulted in an attack that resulted in Raiden ended up having his left arm cut off and severely wounded, and his left eye completely destroyed; after a run-in with an anonymous renegade Cyborg Ninja named Samuel Rodrigues, causing Maverick personnel, upon receiving it, to transfer and retrieve files that were stored on it, although corrupted files forced them to retrieve them on a weekly basis. In addition, the circumstances of his arm's removal and the transfer of files was also kept strictly classified, so as to prevent competing PMCs from gaining access.[6]

Besides Maverick and Desperado, there was also one other PMC during this time: the Colorado-based World Marshal, Inc., which thanks to the events of the Guns of the Patriots Incident, and the splitting up of the five PMCs that made up Outer Heaven, led to World Marshal becoming the largest PMC in the world. Besides its status as a PMC, it also owned the Denver Police Department thanks to small-government legislation made by then Colorado state senator Steven Armstrong that resulted in the slashing of most government funding, and was also backed by Armstrong as well (which led to an investigation by a grand jury in 2016), and it possessed enough influence to have the United States military launch MQ-320s outside of official channels. In addition, there was also a PMC based in Russia that specialized in air force-like duties, which was headed by a former acquaintance of Maverick PMC commander Boris Vyacheslavovich Popov during the Cold War.[7]

"A sense of duty when the risks run high"

"Arms of the octopus, arms for your war"

"Never a shot in the dark"

"No peace without war "

Warning: The following information is from outside Hideo Kojima's core "Metal Gear Saga." Its canonicity within the continuity is disputed, therefore reader discretion is advised.[?]

The Russian PMC Otselotovaya Khvatka can be seen in the TV commercials at the beginning of Metal Gear Solid 4: Guns of the Patriots, though it is not featured in the main game itself. Some fans previously believed that they were FROGS, due to the commercial featuring female soldiers. However, this is unlikely considering that the FROGS are Liquid Ocelot's personal unit.

Despite originating in different countries, the PMC soldiers in Metal Gear Solid 4 all speak with American accents. The PA announcers for Praying Mantis and Pieuvre Armement, however, do speak with articulate British and French accents, respectively.

In Acts 1 and 2, shortly before the PA announcements for Praying Mantis and Pieuvre Armement, respectively, there is a jingle that plays. The jingle, nicknamed the 5PM Bell, is taken from PSA announcements on Japan's various cities and trains, being used to ensure people don't miss the important announcements.[10] 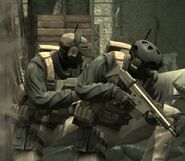 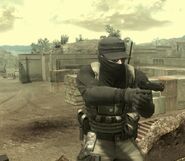 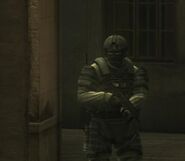 A Humvee operated by Raven Sword, deployed on a routine patrol.