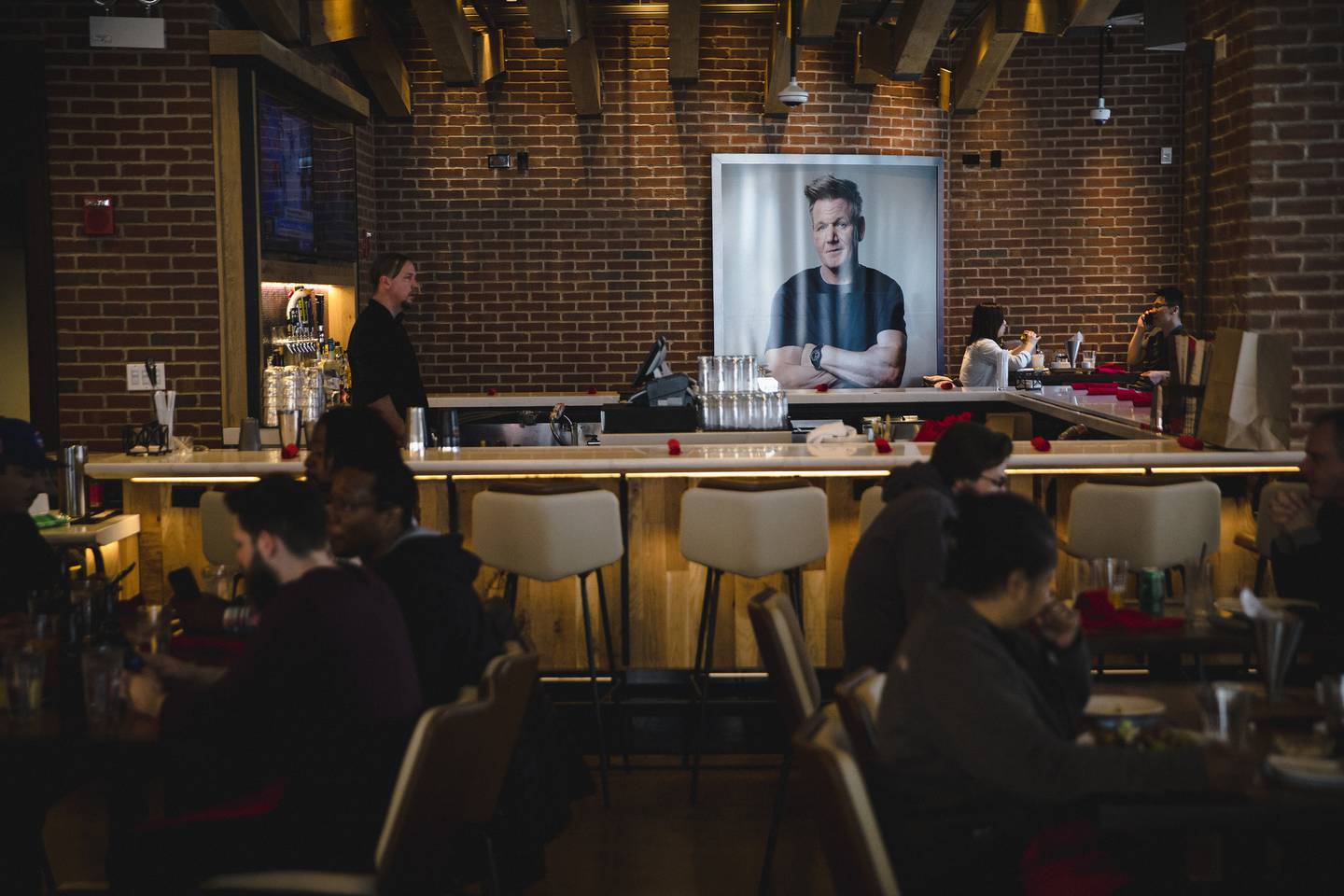 People often ask if I enjoy writing negative restaurant reviews, and the answer is almost always no. Who wants to eat bad food on purpose?

But what about taking a whack at a restaurant from one of the world’s most recognizable celebrity chefs, who decided to open the second location of a 10-year-old Las Vegas concept? Also, did you hear that the hot dog on the menu has ketchup on it?

Of course, Gordon Ramsay has slightly more notoriety as a chef. Though probably best known for berating contestants on “Hell’s Kitchen,” a cooking competition show that’s been running since 2005, Ramsay had a celebrated cooking career before he ever appeared on camera. In fact, his restaurants currently have seven Michelin stars: three for Restaurant Gordon Ramsay in London; two for Le Pressoir d’Argent in Bourdeaux, France; plus one each for Gordon Ramsay au Trianon in Versailles, France and Pétrus in London.

You may notice all of his most acclaimed projects are overseas. In the United States, Ramsay has focused on approachable restaurants, like this burger concept, Gordon Ramsay Fish & Chips, Gordon Ramsay Pub & Grill and the slightly more upscale Hell’s Kitchen. In fact, Ramsay is getting ready to open a Chicago location of that last one in early 2023.

Call it a cash grab if you’d like, but Gordon Ramsay Burger is packed. That’s true when I dined for lunch on a Saturday, and again on a random Monday night. But would anyone be there if it weren’t for the name on the sign, even if there is very, very little chance of seeing him in the kitchen flipping burgers (or the bird)?

Speaking as someone who has eaten many hundreds of burgers around Chicago over the past five years, I have some thoughts. As I’ve hopefully made clear, my favorite burger spots lavish as much attention as possible on the beef. That means no frozen patties, and it helps if the meat is ground in-house. Buns should be soft, yet structurally sound. While toppings, especially onions, are undoubtedly important, they are best in the supporting role.

But it seems you can’t be a chef-inspired burger joint without most of the attention being squandered on the toppings. The menu features a half-dozen burger options, and each has to have a whole host of ingredients. So the Forest Burger ($15) arrives with Swiss cheese, mushrooms, a fried egg, arugula and a porcini aioli, while the Hell’s Kitchen Burger ($17) has mozzarella, roasted jalapeños, roasted tomato and avocado. The quality of each component is high, but they also steamroll over the flavor of the meat.

Which turns out to be a shame, because the beef at Gordon Ramsay Burger is good. Instead of an onslaught of grease, each bite displays a deeply savory base that’s balanced by a slight mineral tang. The 7-ounce patties are made from a mix of chuck, brisket and short rib, and while the kitchen declined to tell me where exactly the meat comes from, I was assured it’s from “some of the best farms out of the Midwest.”

[ Review: Is Chicago’s most exciting new steakhouse in East Pilsen? A steak-obsessed critic hopes so. ]

But what really sets Gordon Ramsay Burger apart from the pack is the unique cooking process. Chefs baste the beef in butter while it’s still on the grill, causing it to pick up captivating charred and smoky aromas. Of course, Ramsay isn’t personally back there basting the beef with butter, but he’s hired a crew to replicate the process.

There’s no build-your-own-burger option on the menu, so the best bet is to order the Backyard Burger ($15) and dispense with the lettuce and tomato, leaving the American cheese, sliced red onion, and crunchy house pickles. It’s not the best burger in the area, and it’s certainly not the cheapest, but fellow burger freaks should probably try it at least once.

The rest of the short menu alternates between a few genuine hits and a fair number of fatty misses. I figured the Southern Yardbird ($17) would be a fried chicken sandwich, but instead it’s a ground chicken burger, something I never need to try again. The street corn dip ($12) promises “elote-style corn,” but the meager amount of corn is swamped in an overly creamy sauce, while the crumbled assortment of tortilla chips on the side looked like I’d gotten the dregs from the bottom of the bag.

Much better are the onion rings ($10), which arrive stacked high on a stick. Featuring a crackly crust and a showering of salty, funky Parmesan, they are much more intriguing than the fries ($7), which pale in comparison to Chicago’s many great fresh-cut options. I was surprised by how much I enjoyed the sticky toffee shake ($9), made with brown butter ice cream, drizzled with toffee sauce and topped with whipped cream.

No review would be complete without mentioning that Gordon Ramsay puts ketchup on the standard Hot Dawg ($13). In fact, there are two hot dogs on the menu and both have the red stuff slathered on them. This seems intentionally provocative considering Chicago’s international reputation for being anti-ketchup. But do Chicagoans really hate ketchup that much? The truth is that there are only a few militantly anti-ketchup hot dog stands — Jimmy’s Red Hots and Gene and Jude’s come to mind — while the vast majority will add it without blinking, even if they silently judge you while doing so.

Whether or not ketchup completely smothers the flavor of the hot dog is a topic too big to deal with here, but there’s no doubt it adds a lot of sugar. Then again, so does neon-green relish. Honestly, it doesn’t really matter, because Ramsay should have spent more time worrying about the bun. Chicago’s best hot dogs come on soft, steamed buns, which cradle the hot dog without getting in the way. But the sesame seed bun that’s toasted on two sides fights with the oversize sausage, distracting from the main event.

Considering the first location opened in 2012, you’d think some of these issues would have been ironed out by now. But if you’re up for taking a roundabout route for a straightforward burger, you can’t argue with good beef.

What to eat. What to watch. What you need to live your best life … now.

Tribune rating: 2 stars (very good) for the beef, 1 star (good) for everything else.

Big screen or home stream, takeout or dine-in, Tribune writers are here to steer you toward your next great experience. Sign up for your free weekly Eat. Watch. Do. newsletter here.