As blocks along Sunset Boulevard go, the stretch between North Stanley Avenue and North Curson Avenue at the western end of Hollywood falls palpably silent after dark. The gates to a FedEx Office store and a luxury car-rental service have been bolted; through smudged windows, empty retail spaces reveal stop-and-start construction. Your gaze will settle on the most striking thing around: a restaurant facade freshly painted the shade of artist Yves Klein’s electric blue.

This is Horses, an odd if not downright terrible name for a restaurant — until the context clicks. Then it becomes synonymous with the city’s most exhilarating new dining experience in the last year.

Pull open the door. It’s a portal to a warren of teeming rooms where the concept of time feels hazy: scruffy hardwood floors, wainscoting, a long bar polished to a well-worn gleam, canary-yellow banquettes and studded candy-apple-red chairs. Art depicting figures floating in the ether yank the mind from reality. Past the proof-of-vaccination checkpoint that was once simply a host stand, the famous, the nearly famous, those that resemble someone famous and the rest of us mingle over excellent Vespers and reconceived Caesar salads. The vibe crisscrosses eras and social circles — a public house with a private club clientele, the Tam O’Shanter booked out by the Soho House crowd — in an only-in-L.A. blur of scenery.

For over 70 years, the building housed Ye Coach & Horses, which opened as a pub in 1937 in the heart of Hollywood’s golden age. Actors like Richard Burton and Richard Harris frequented the place in its earliest years; later it settled in as a beloved dive bar for generations of locals. 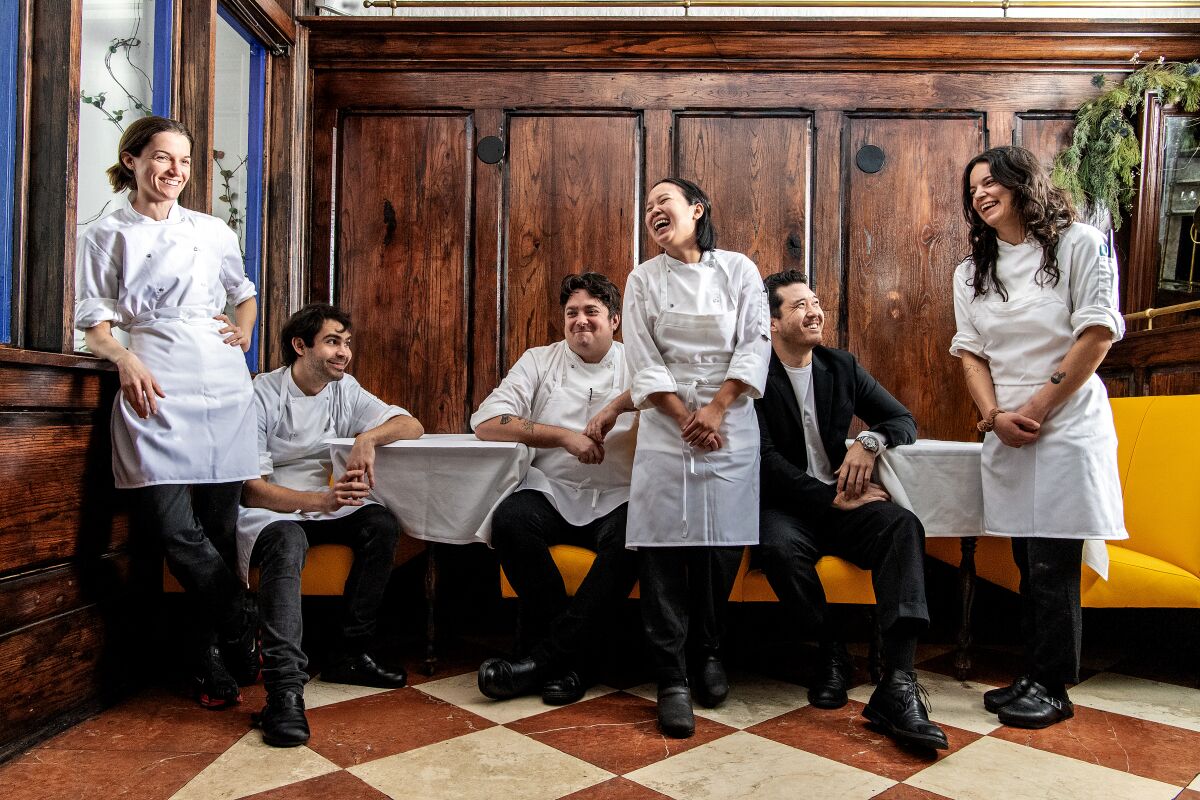 After Coach & Horses’ last owner, Jane Grant, lost the lease in 2010, it was resurrected as the Pikey — a pub that was decidedly a pub, a stopover for fish and chips and Pabst Blue Ribbon during a moment in the restaurant culture when any sort of casual establishment that put some effort into both its food and drink menus wound up being labeled a “gastropub.” The Pikey closed in April 2020, a first-wave victim of this relentless pandemic.

The new tenants break with the lineage. No one could saddle Horses, which opened in September, with either a strict pub or broad gastropub billing. The restaurant is its own exquisite creature.

Chefs Liz Johnson and Will Aghajanian, who are married, lead a team that includes co-executive chefs Brittany Ha and Lee Pallerino, pastry chef Hannah Grubba and Terence Leavey, the restaurant’s general manager and wine director whose résumé includes Spago and Vespertine. Johnson and Aghajanian both have long, international bios — locally, Johnson was the opening chef of Freedman’s in Silver Lake in 2017 — that have involved forays into modernist cooking. Here, they mostly leave the modernism to visual artist Kacper Abolik, whose gently surrealist paintings of Pegasus and other apt subject matter light up the dim, cloistered back room (the quietest of the restaurant’s options; I prefer it). 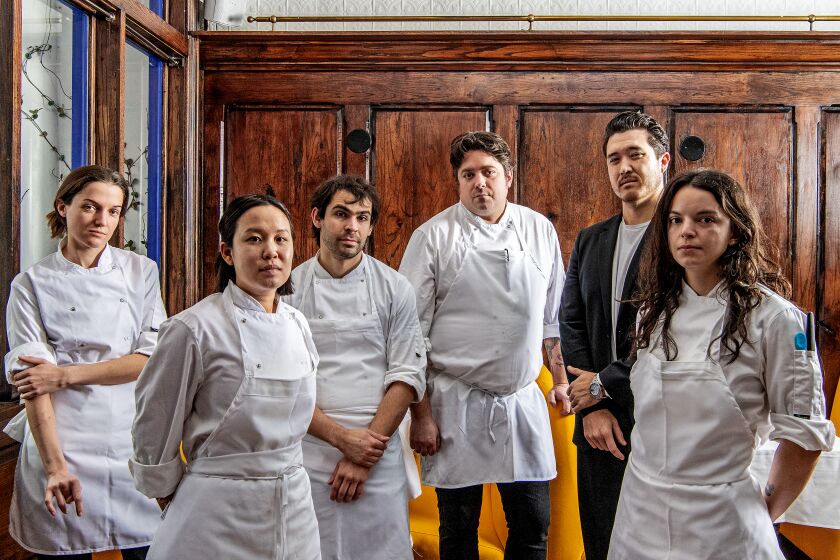 Inside the egalitarian, ‘chef-heavy’ kitchen at Horses

Each chef at Horses in Hollywood has a role in the collective good, forming a kind of informal system of checks and balances.

If the menu, an ever-evolving collaboration between the four principal chefs, requires classification, call it Continental-Californian, a friendly amalgam of Spanish, Italian and French notions with the expected homegrown seasonality. So much comes together thrillingly: the cooking, beverage director Steven LaFountain’s tweaked but not overly precious cocktails (gin infused with fig leaf for Vesper, for example, is blessedly subtle), the servers brimming with personality and the lived-in, nearly sentient character of the setting.

When I think about what I want to eat at Horses, my brain veers first to the boudin Basque. A variation on morcilla (blood sausage), the recipe incorporates the braised and chopped meat from a pig’s head with loads of caramelized onions and an understated zap of the peppery, clove-y French spice blend quatre épices. The boudin sits on a square of brioche, its amorphous form covered by a delicately fried egg dripping yolk. Custardy but dense with mystery, charged with spice and sweetness and a telltale hint of iron, the dish is a thundercloud of texture and flavor.

Angelenos seem to have embraced blood sausage. Here, it’s turned out to be a menu anchor along with a handful of other standouts: spatchcocked Cornish game hen, its skin papery-crisp and attractively charred, over panzanella salad threaded with mild dandelion greens; butcher’s steak (a.k.a. hanger steak) grilled over vine cuttings with a silky celeriac dauphinoise on the side; and a very un-smashburger cheeseburger that combines chuck, rib and top round cuts and costs $27. Burger aficionados not repelled by the price should savor its merits. 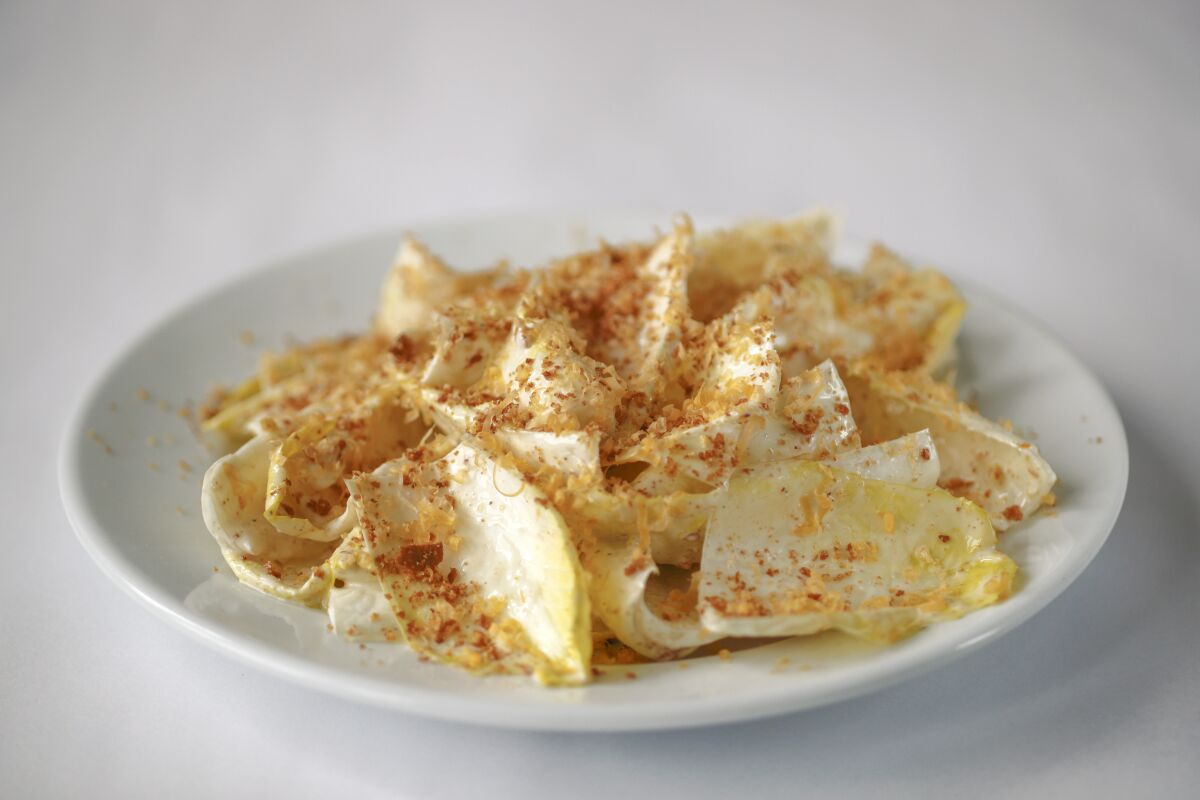 The endive Caesar at Horses.

Then there’s the rejiggered Caesar. The team swaps out romaine for endive, eschews croutons for the uniform crunch of scattered breadcrumbs and, though Parmesan remains integral to the punchy dressing, showers the salad with nutty Mimolette before it arrives at the table. Would Caesar Cardini recognize his circa-1920s Tijuana masterpiece in this deviation? Probably not, but after a near-century of myriad wan imitations, the thought behind this unorthodoxy feels inspired.

A forever darling of local restaurant kitchens, the Caesar is also one of the dishes through which Johnson and Aghajanian pay deliberate homage to Los Angeles’ dining culture. A snack of crackery lavash strewn with smoked salmon and optional caviar nods to Wolfgang Puck’s defining pizza. Less obvious but even cleverer: Sobrassada, a spreadable Spanish sausage akin to Italy’s ’nduja, fills a small, pancake-thin brioche panino cut into four sections. It’s a play on the from-another-era pigs in a blanket served at entertainment industry hangouts like Sunset Tower and Craig’s.

That’s the sneaky genius of Horses: Its players have studied their audience. Without coming off as gimmicky or overly calculated, the restaurant insinuates itself as organically as possible into the landscape. Immediately it feels very much of Los Angeles while also asserting its own creativity; that’s a combination, when pulled off successfully, this city values. No surprise that prime reservations are booked weeks out. Even if you’ve been back in restaurants regularly over the last year, the density and voltage of this particular crowd can make your brain whirl. 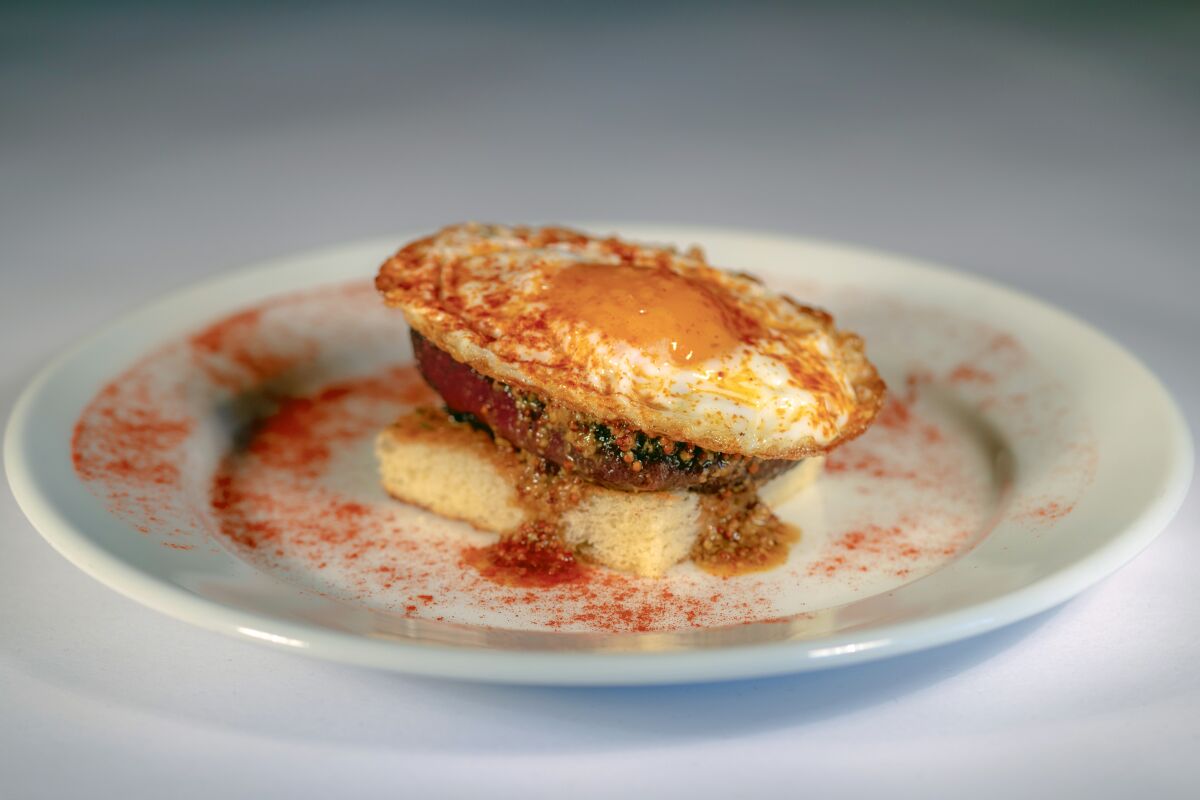 Is everything on the plate perfect? Not quite. Big hunks of overcooked fish marred a take on cioppino with saffron rouille; the dish looks to have already rotated off the menu. Fried nuggets of veal sweetbreads have tasted more like batter than anything else. Pastas receive the brunt of the chefs’ restless imaginations; they rotate maybe a little too fast to ever settle into practiced excellence. I vote for the gnocchi with taleggio fonduta and a thick dusting of nutmeg to stick around.

A miss here and there doesn’t come near to ruining the meal. Order a slice of Grubba’s sheep’s milk cheesecake (this is, after all, forever a cheesecake town) with grappa roasted pear or whatever fruit of the moment she’s loving; sip the last half-glass from a bottle of Zorah Karasì, a cherry-bright Armenian red that Leavey will swing back around to make sure you enjoyed.

This is an appropriate place to mention that this review is being published during a week when the Omicron variant is spreading in Los Angeles County, and the calculus of its impact on restaurants and the safety of their workers remains fraught. Please be mindful out there.

Our future is too muddied still for dependable prognosticating. But as a template for what a modern Hollywood institution may look, taste and feel like, Horses already lights up the dark night.