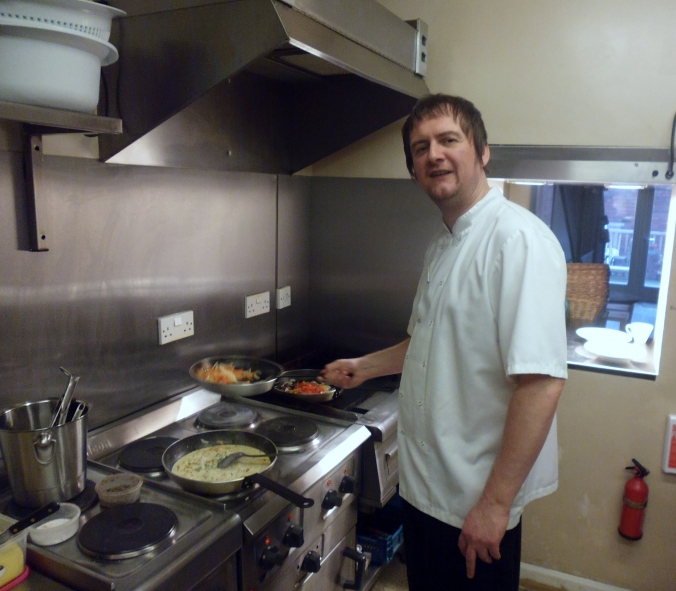 This is Richie Russell, head chef at Remo’s in Broomhill, Sheffield, and he’s pretty big in South Korea. I know this because I keep getting visits to my blog from that country.

There have been 35 in the last week alone. And the one post they want to read is Rendezvous with Remo, written this time last January, about our Italian bistro evening cooked by Richie. So far that particular item has notched up 532 views, half of which have come from South Korea.

My WordPress blog has some nifty analytics and not only tells me which countries read it but also the search terms and they include ‘Richie Russell chef,’ ‘Richie Silversmiths’ and so on. That means I can’t kid myself they want to read about Sheffield Fishcakes or how to make brown sauce. But how had they tracked him down to my blog?

Richie, you will remember, starred in the Gordon Ramsay Kitchen Nightmares series back in 2009 which saw the Runaway Girl restaurant in Arundel Street turned into Silversmiths, with 310 expletive deleteds uttered along the way, almost all of them by Ramsay and Richie.

This show has been seen around the world. I had a flurry of interest from Australia when it was shown there. And it can be seen on the Korean version of YouTube, presumably with sub-titles. Someone has put a link in the comments section to that post on this blog. hence the visits.

Now Kitchen Nightmares happened over six years ago but the past is always present on the internet. Richie has moved on, first to Piccolo, then, three years ago, to his old friend Remo Simeone’s place in Broomhill. Between them they have turned the best coffee shop in town into a thriving café and once a month bistro.

I popped in for coffee and put my head round the kitchen door to see Richie. He’s not unaware of the interest. “I can always tell which country is watching the show because people try and contact me. When it was shown in Australia people wanted to befriend me on Facebook,” he said while preparing for that night’s bistro evening.

He has not, so far, had any requests from South Korea although that can only be a matter of time. I had a request to make of Richie. The blog picture most clicked is that of the café but while it shows Remo at work there is no sign of Richie.

Every journalist knows they should never disappoint a reader so here, for all of you out there in South Korea, is Richie. Now how long before someone puts a link on YouTube to this?

STOP PRESS. Richie left Remo’s in September, 2018. For readers in South Korea I am trying to find out where he is now. In fact, he has quit catering and is now in painting and decorating.